Arson finally on decline in Detroit. Now for the bad news.

Arson in Detroit from The Center for Michigan on Vimeo.

Detroit Fire Lt. Joe Crandall shook his head and catalogued what remained of the torched home.

A gutted garage. Half a wall. A pile of rubble. Many questions and few answers. Next-door neighbors said they knew nothing. The owner who was rehabbing the house wasn’t around. No one, it seemed, saw anything until the inferno grew so hot it melted siding on nearby homes and the paint off parked cars.

“We’re going to need a little help with this one,” said Crandall, an arson investigator, as he stapled a sign promising a reward leading for information that led to an arrest of whoever torched the wooden bungalow.

The scene this month unfolded with a casual banality that would be shocking anywhere but Detroit. That’s because fire is so common: Last year, the city had 3,400 building fires, most of which were suspicious. But arson is a crime with few clues. Done right, they go up in smoke. So getting witnesses to talk is often crucial to cracking cases.

And the reward sign Crandall was holding is one of the most effective weapons in Detroit’s decades-long struggle against intentional fires. Beyond revenge, the primary motivation for witnesses to come forward to report arson is money, firefighters say.

That incentive is set to vanish next year in Detroit and all of Michigan. After more than 40 years, the nonprofit group that has paid the rewards of up to $5,000, the Michigan Arson Prevention Committee, will close unless a new funding source is found, said its director, Patrick Riney.

That’s because the group’s $140,000 budget was eliminated this spring by its longtime funder, the Detroit-based Michigan Basic Property Insurance Association, which sells high-risk home insurance in urban areas that other insurers traditionally are reluctant to touch.

“This is a big tool that’s going to be lost statewide now,” Riney said. “Investigators aren’t going to have that hammer to get witnesses to speak.”

The program has paid nearly $1 million in rewards since 1975, resulting in 1,245 arrests. Since 2011, the rewards have helped crack 76 cases from Ypsilanti to Kalamazoo, with nearly half helping solve Detroit arsons, the group reported.

The amount of the rewards may not seem like much. But the potential of money –  especially in poor neighborhoods –  is an “icebreaker” that can get neighbors to talk and is “one more thing to connect the dots,” Crandall said.

“Reward money changes people’s interest. Up to $5,000 can change someone’s life in Detroit,” he said.

‘Only game in town’

The threatened demise of the rewards program comes as Detroit is making slow –  but measurable –  progress fighting a culture of fire as ingrained in the city as Motown music. 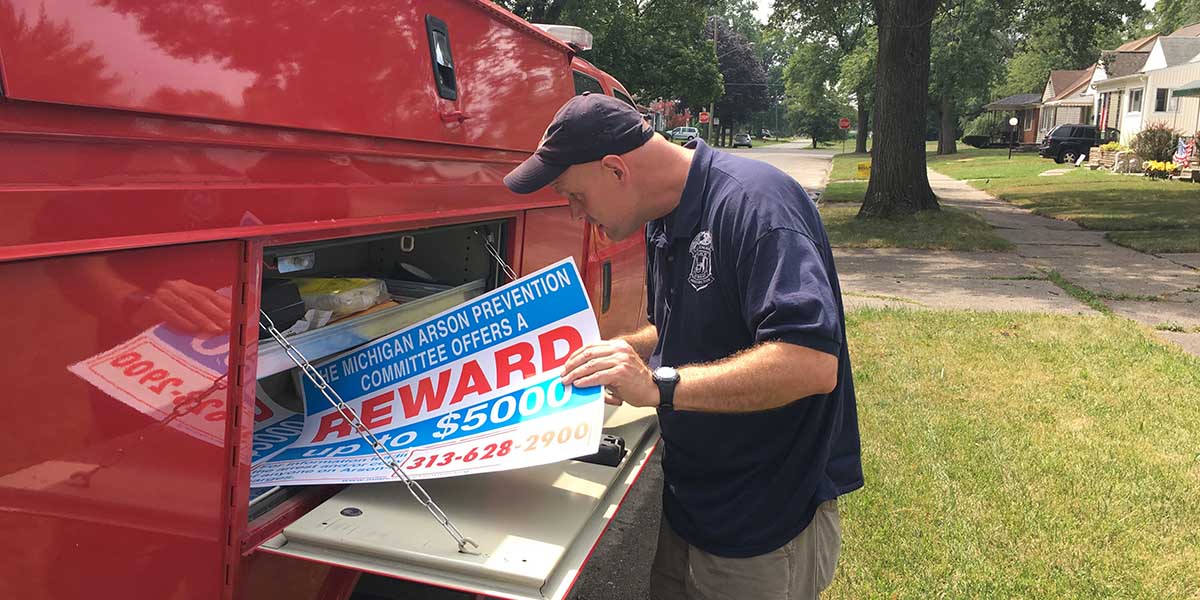 Detroit Fire Lt. Joseph Crandall retrieves a reward poster from his truck. The signs are one of the most visible –  and effective –  tools in the tricky science of solving arson cases. (Bridge photo by Joel Kurth)

Detroit has led the nation in per-capita arsons for years, and became notorious in the 1970s for homes torched around Halloween, a tradition known as Devil’s Night. Blaze-gazers still flock to the city to follow firefighters and post clips on YouTube. It’s such a phenomenon that, as the city slid to bankruptcy in 2012, Detroit’s then-fire commissioner proposed charging tourists fees to ride along on fire rigs.

Around that time, budget cuts had gutted the city’s arson squad, reducing the number of investigators from 20 in 2001 to seven in 2011. About two-thirds of all fires in Detroit were never investigated.

Mayor Mike Duggan has revamped the unit since taking office in 2014, bringing its ranks to 16 investigators and assigning nine police detectives to work only on arsons, said Patrick McNulty, chief of the Fire Department’s Arson Squad.

Since then, arrests have risen a third to 158 last year, while suspicious fires have dropped 27 percent from about 4,600, according to the Fire Department. Among other things, there’s less to burn: In the past four years, Detroit has razed 11,500 vacant homes, which are the most typical targets of arson.

“This is the only game in town. It’s going to have a big impact on us,” McNulty said. “Things are trending up. It seems like we’ve finally turned a corner.”

Detroit arson investigators report that arrests are increasing since changes to the department. Here’s a look at the number of arrests per year.

Many states have similar programs that are funded either by insurers or state governments. Even those who run them acknowledge rewards have narrow appeal.

“I would say it’s an underutilized program,” acknowledged T.A. Brininger, executive secretary of Ohio’s Blue Ribbon Arson Committee, which is funded by insurers and pays similar rewards as Michigan.

Among the problems: A proliferation of other rewards, from those offered by insurance companies to the groups such as Crime Stoppers, and the reluctance of some prosecutors to move forward on arson cases that are traditionally more complicated than other crimes, Brininger said.

In Michigan, fire investigators argue the rewards programs pays for itself.

FBI records estimate Michigan had 1,999 arsons in 2015, while state figures indicate fires caused $545 million in damage in 2014, the last year of available records. Those numbers include Detroit, but only fires that are investigated and proven intentional are counted as arson in the numbers. Despite its progress, Detroit still isn't  able to fully investigate all suspicious fires.

“You avoid one arson and it would pay for (the arson committee’s) entire budget,”  said Stephen Thomas, a retired investigator who worked for the Michigan Basic Property Insurance Association.

He said the funding stopped when Michigan Basic’s fortunes changed.

State lawmakers established Michigan Basic in 1968 to provide insurance in areas that had trouble getting coverage after civil unrest swept the state and nation the year before. Michigan Basic offered discounted policies and was subsidized by other insurers when it lost money. It always did, Thomas said.

In 2012, though, state lawmakers required Michigan Basic to charge market rates for its policies. Since then, the subsidy has ended. And the number of Michigan Basic’s customers has declined, said Jane Howard-Carlson, general manager of the company.

She wrote in an email to Bridge that Michigan Basic “recognizes the value” of the “impressive” arson group and hopes it can “find other funding sources to be able to continue.”

Thomas and Riney said the arson prevention committee  has approached other insurers without luck.

‘Clipboard therapy’ on the east side

Back in Detroit’s northeast side, Crandall is too busy juggling cases to get caught up in the debate. The night before he talked to Bridge Magazine, there were six fires in Detroit.

To him, the rewards are one more tool in the tricky calculus of solving arson cases. Stapling a reward sign on a charred building is part of what Crandall calls “clipboard therapy” –  walking often-neglected streets, talking to residents and leaving them with a positive impression of law enforcement. It pays dividends in the long run, he said. 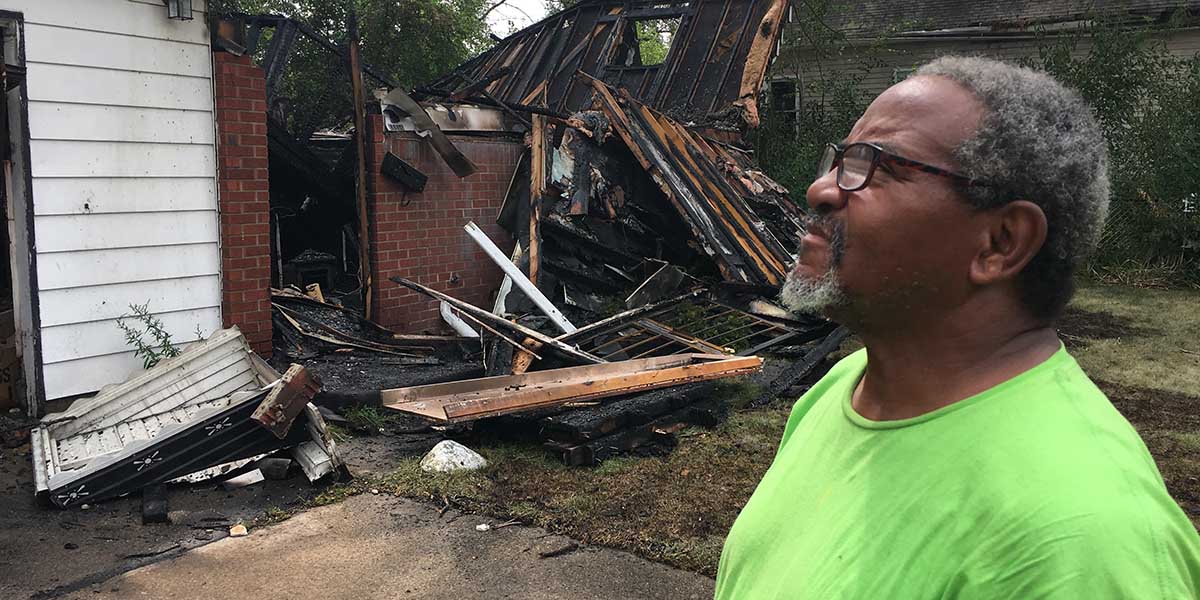 Detroit resident W.D. Carter inspects the damage of his house next door. He said was asleep when the home that was recently being rehabbed went up in smoke. (Bridge photo by Joel Kurth)

As for the house with the gutted garage and crumbling wall?

Crandall talks a few minutes with next-door neighbor W.D. Carter, a retired janitor who said he slept through much of the blaze. The investigator walks around the house and concludes most of the damage was caused by a backdraft –  a long-smoldering fire in an area with little ventilation that intensifies when a window breaks or a door opens and oxygen feeds the flames.

Crandall tacks up the reward poster. Unless someone comes forward, there’s little chance of solving the case, he said. There’s still simply too many fires.

“We still have a long way to go to take fire out of the culture of Detroit,” Crandall said.

The numbers presented in this story seem to indicate something around $30,000 is paid out to Detroit residents per year for the past several years. So why is this a problem? Eliminating 3 houses per year from the demo budget could fund this. Figuring out why the demo cost has jumped so much under the Duggan administration could find a few extra thousand to put in the reward fund. This story sounds like a non-problem looking for something to be written about.

At the risk of asking a blindingly obvious question: If funding is so crucial to the viability of this program, exactly what is stopping the legal system (aka Kym Worthy) from seizing the assets of those convicted of arson, selling off those assets and using the proceeds from that sale to sustain the program?

It only stands to reason that those responsible for this problem should be made to help clean it up.