Is Detroit coming back? It depends on the neighborhood.

SLIDESHOW: Click or swipe to see how Detroit is improving (or not) across a wide array of metrics...

Maurice Cox, director of planning for the City of Detroit, says the city’s redevelopment and momentum in the past few years is cause for optimism.

Detroit is at an inflection point. Maurice Cox can see it. So can the Rev. Aaron McCarthy, Jr. And their visions reveal much about a city brimming with possibility and problems.

The director of Detroit’s Planning Department, Cox has one of the best views at the Coleman A. Young Municipal Center.  His eighth-floor window overlooks a downtown so revitalized that it’s practically unrecognizable from a few years ago.

“A lot of people who have been following Detroit’s recovery for a very long time have convinced me there’s something different about this one,” Cox said.

“People are seeing forward momentum. The streetlights come on at night. The lots are better maintained. Blight is coming down in everyone’s neighborhood. Little shops are popping up. Our downtown is on the upswing.”

Three miles away, McCarthy has another view. It’s of a spoon stirring pork and beans for his outdoor soup kitchen and community of 16 tents for the homeless along busy Mount Elliott Street.

He erected the tents in mid-September and christened the village Resurrection City to honor Martin Luther King, Jr. and draw attention to what McCarthy says is a city that neglects its most vulnerable citizens. The encampment already has a waiting list to sleep in the tiny tents.

“With everything we have in the city, poverty is so high it’s an ignored state of emergency,” said McCarthy, president of the Detroit chapter of the slain civil rights leader’s Southern Christian Leadership Conference.

“While you are spending all this money downtown, you have all these poor people who are becoming invisible.” 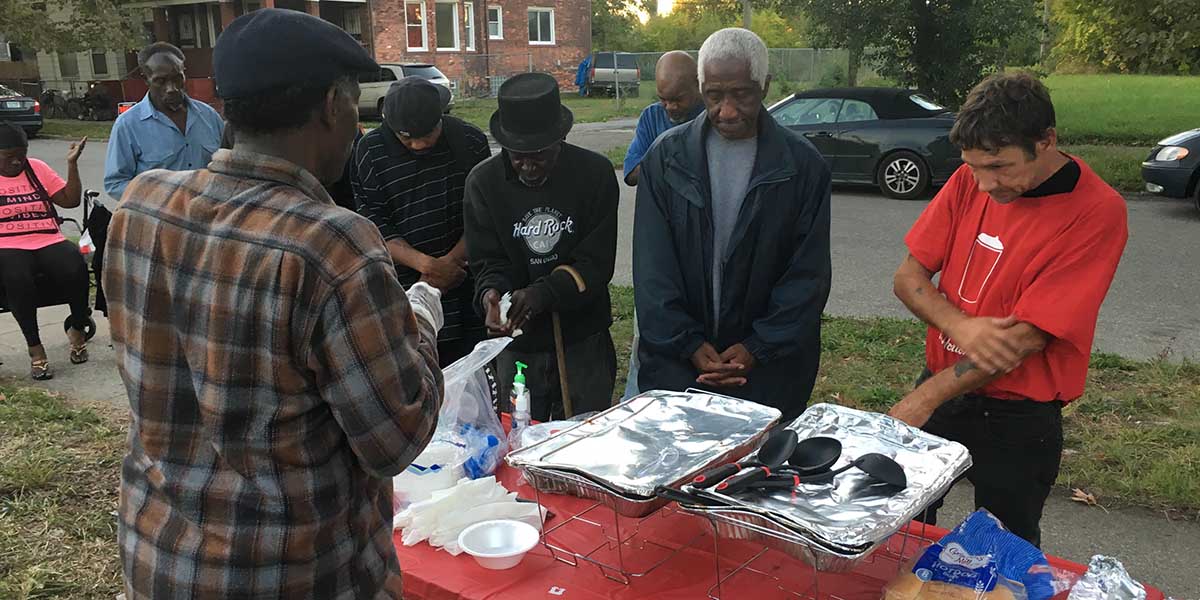 The Rev. Aaron McCarthy, Jr. leads a prayer before feeding residents of a tent encampment he’s established on the east side. (Bridge photo by Joel Kurth)

The two perspectives are at the heart of an ongoing, practically daily debate in Detroit, three years after it has emerged from bankruptcy. Few deny big changes are afoot in the city that former Mayor Dave Bing just a few years ago called a “hell hole.” In recent months, the city has announced a host of initiatives, from a $125 million effort to revamp commercial corridors to plans for a 26-mile “inner-city greenway” series of bike and walking paths to connect neighborhoods.

National publications from Forbes to National Geographic herald the Detroit comeback narrative. Most give credit to Bing’s successor, one-term Mayor Mike Duggan, who Politico says pulled the city “from the brink” and national columnist George Will called “America’s most accomplishing politician.”

The view from the streets, though, is more tempered in the weeks leading to the Nov. 7 nonpartisan election that pits Duggan against state Sen. Coleman A. Young II, the son of the city’s first black mayor and namesake of the municipal offices where Cox works.

“Is Detroit coming back? For some people. It’s coming back for people who have money,” said Reginald Jones, a retired city water department worker who lives in northwest Detroit. 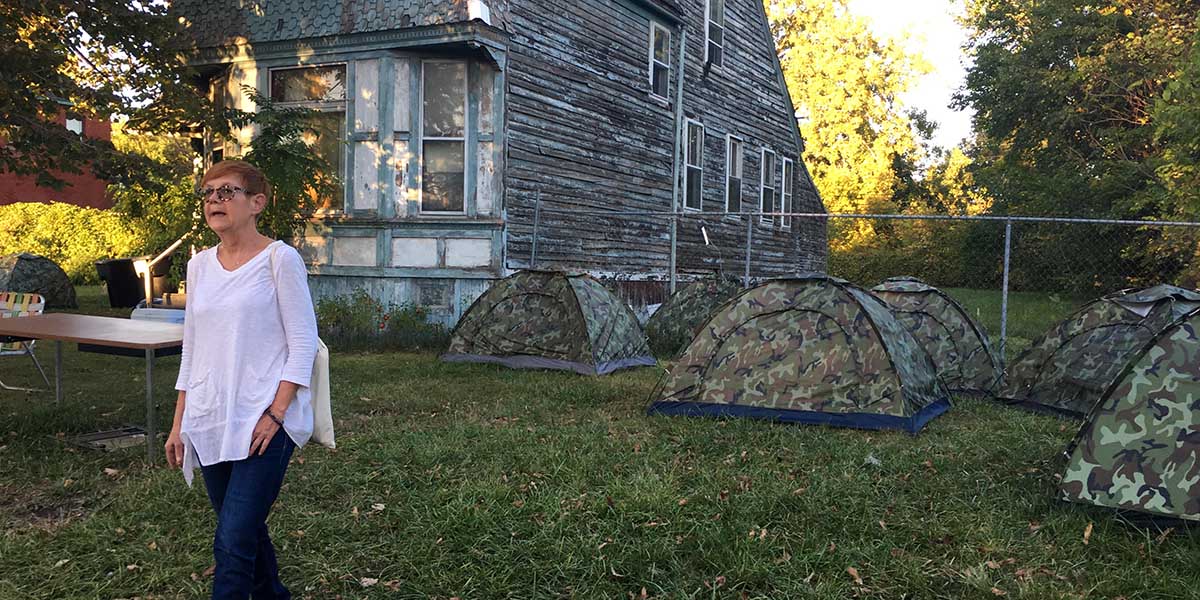 Anna Krol volunteers at “Resurrection City,” an encampment of more than a dozen tents on Detroit’s east side. Less than a month since the camp opened, it already has a waiting list of homeless people to sleep in tents. (Bridge photo by Joel Kurth)

Michael Carlisle disagrees. An unemployed janitor, he’s looking for work. Downtown developments could give him a job.

“Of course we’re coming back. The comeback downtown can spread up here,” says Carlisle, who lives in northeast Detroit.

Since August, Bridge Magazine has had numerous conversations with residents in four vastly different corners of Detroit: Osborn and Islandview on the east side, and Bagley and Warrendale on the west.

Islandview is ascendant. Bagley is steady. Warrendale is in transition. And Osborn is struggling.

Bridge measured metrics in each neighborhood and found plenty of room for optimism.

Violent crime is trending down. So are home assessments after decades of complaints that unrealistically high ones left residents unable to pay tax bills. Building permits are up, as are demolitions of blighted homes. Streetlights are on, closed parks are open again, the city has resumed street sweeping and crews mow vacant lots more often.

But the neighborhoods continue to lose residents. In Duggan’s four years, tens of thousands of homes citywide have been foreclosed and had water disconnected for non-payment. Detroit’s overall poverty rate has declined to 35.7 percent, but that’s still the highest rate among the nation’s 20 biggest cities. And it remains the most violent city in the nation, according to the FBI.

The mayoral election in many ways is a referendum on the health of the city’s neighborhoods, far from the bustle of Midtown and downtown.

Today, Bridge tells the story of these four neighborhoods because each, in their own way, illustrates the promise and pitfalls of Detroit.

Is there any particular reason why several statistics in the slide show above (major crimes, population, etc.), do not match up with the statistics put out by the FBI's UCR for 2016 which was released just last month?