Detroit deportee adjusts to Mexico’s poverty. 'You can’t believe it'

GUANAJUATO, MEXICO –  Jose Flores lives with his father in a six-room, concrete house next to the warehouse that his father manages in a town called Acambaro.

Flores feels blessed he and his dad live a decent life with wi-fi and running water, but the community surrounding them brings a pained look to his face. He grew up in Detroit, the poorest big city in the United States. Since he was deported earlier this year, he’s lived among a level of poverty that is difficult to fathom.

On a September afternoon, Flores unlocked the steel gate that separates his neat, little home from what lies beyond. The gate creaked open into a different world, revealing rows of shanty houses patched together with scrap metal. A group of school-age children, some wearing no shoes and one donning a UNICEF T-shirt, were not in school, but trudging down a dirt path trailed by three grungy dogs.

Flores stepped his high-top Nike shoes over mud puddles as he explained in a low voice that the houses appear to have electricity, but he’s doesn’t know if they have running water.

“You hear the stories, but once you see it, you can’t believe it,” Flores, 23, said of the poverty.

MORE COVERAGE: They grew up in the United States. They’re finding a better life abroad. 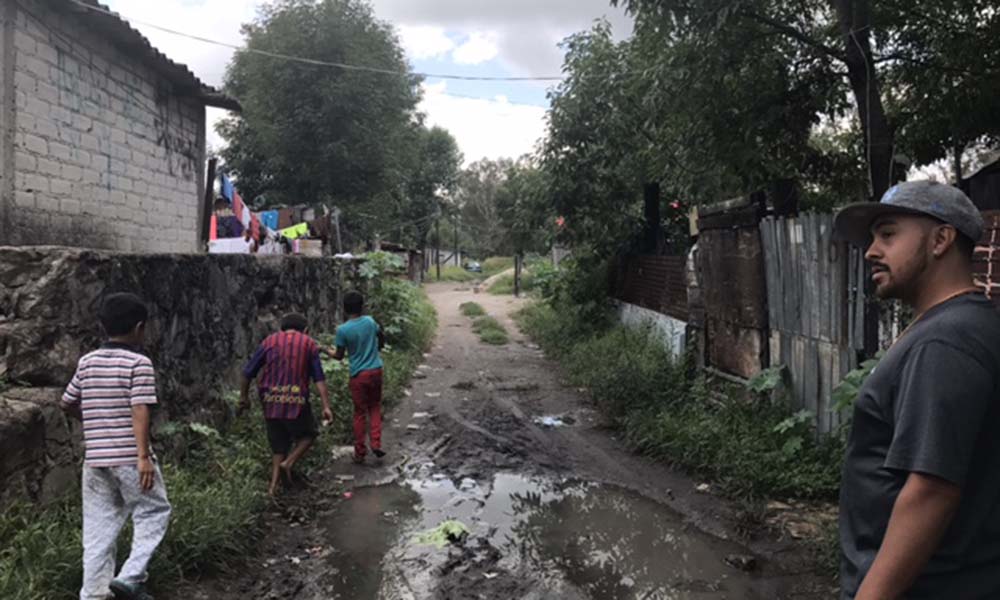 Jose Flores, a former Detroit resident, was deported to Mexico this year and says little could prepare him for the nation’s poverty. (Bridge photo by Chastity Pratt Dawsey)

The state of Guanajuato, in central Mexico, is one of the 10 richest in the nation. Its average wage last year was about 11,762 pesos per month, the equivalent of $611 U.S. dollars. Nearly 45 percent of its residents live in poverty, about 10 percentage points more than Detroit, which is the poorest big city in the United States.

Flores grew up in southwest Detroit as an undocumented immigrant after his family took him to the U.S. on a visitor’s visa when he was 3-years old.  He was arrested last year for drunk driving and deported in February.

His new life –  surrounded by poverty and often homesick for the U.S. –  serves as an example of what hundreds of thousands of other young immigrants who grew up in America might soon face.

While Flores tries to adjust to a new life in Mexico, the Deferred Action for Childhood Arrivals program is set to expire next year, putting thousands of other Mexican young adults at risk of deportation from the United States.

DACA provides an estimated 800,000 young adults who were brought to the U.S. as children –  618,000 from Mexico –  a renewable two-year protection from deportation as long as they go to school, work and stay out of trouble with the law.

President Barack Obama implemented DACA in 2012 for undocumented immigrants who arrived by the age of 16 and lived in the U.S. since 2007 or earlier. It was in response to Congress’ failure to act on the Dream Act, a bill that would’ve provided youth who were brought to America a path to permanent residency.

President Donald Trump on Sept. 5 rescinded DACA, announcing that it will expire March 5 unless Congress acts to restore it. Trump, who has promised to build a wall between Mexico and the United States, wants Congress to come up with a comprehensive plan to reduce immigration.

Michigan is home to about 6,400 DACA recipients, known as Dreamers. Dreamers and those eligible for DACA pay nearly $16 million in state and local taxes each year in Michigan, according to the Institute on Taxation and Economic Policy, a nonprofit research group in Washington, D.C.

Flores did not finish high school in Detroit and was therefore unable to apply for DACA.

One of the Dreamers whose protection from deportation is caught in the immigration controversy is Flores’ brother, Adonis Flores, an activist with Michigan United, a statewide group that advocates for immigrants.

Adonis Flores, 29, is a student in Wayne State University’s school of business administration and was granted DACA protection in 2014.

Jose Flores is proud of his brother and hopes he will be able to live out his dreams America. Jose, however, has little hope for returning to his family in America anytime soon. He said he would have to wait until his mother, who is a permanent U.S. resident, earns full citizenship and is able to assist with his return to the United States.

“That would be a long time from now,” he said.

Jose Flores has a sadness that sits close to the surface.

It’s in his eyes when he talks about the family he left behind in Detroit.

Underneath the bill of Flores’s Detroit Lions cap, underneath a newish beard, is a slightly babyish, youthful face. Talking about being deported from Detroit to Mexico brings on a tangle of emotions that steals the volume from his voice. He speaks slowly and sometimes slurs together words.

The more he talks about his brother, mother and 17-year-old little sister in Detroit, the lower his voice gets. Many cousins, uncles and aunts live in Detroit, but he also has aunts, uncles, cousins and a grandmother in Mexico as well. 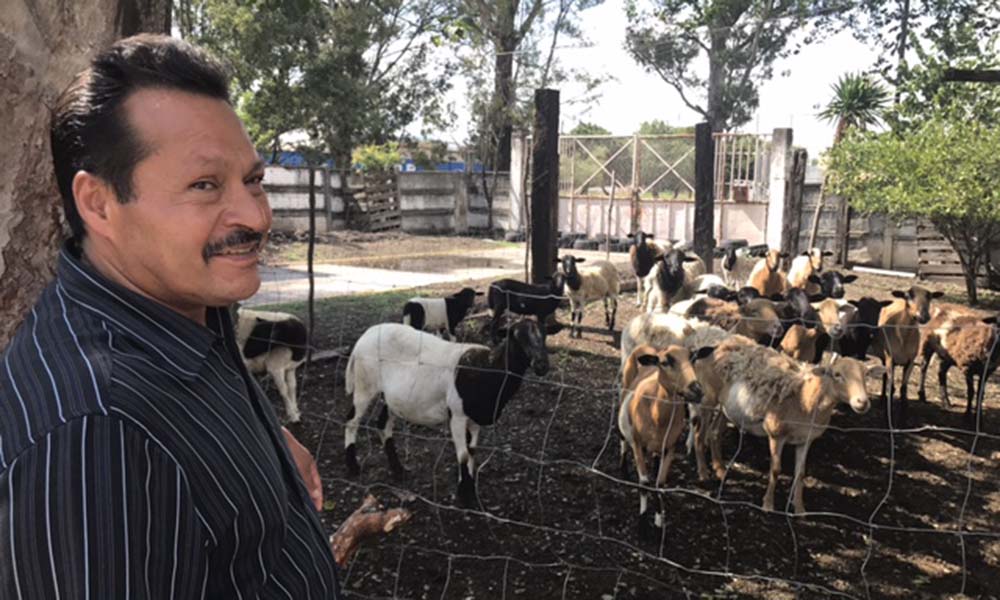 Jose Antonio Flores, who lived for years as an undocumented immigrant in Detroit, manages a warehouse in Mexico and keeps goats that he sells for meat. Flores’ son, Jose, was deported this year and helps his father manage the warehouse. (Bridge photo by Chastity Pratt Dawsey)

His father, Jose Antonio Flores, 56, is a quiet and proud man. He lived as an undocumented immigrant in Detroit for five years working as a welder before voluntarily going back to Mexico in 2006 when he and his wife split up.

For him, his son’s return to Mexico is bittersweet.

He knows his son misses America, but he loves waking up to see one of his three children in his home. Too many miles and too many years have kept them from him.

Tears slip from his steely gaze when he talks about the pain he feels from having his children split between two countries.

Just having a family to return to in Mexico has made Jose Flores’ adjustment less difficult. When he was in detention for three months awaiting deportation, he said he met people who were being deported to countries where they knew no one.

“I’m lucky to have my family,” Flores said.

His father was able to give him a place to stay and a job that paid enough money to even take a vacation to Acapulco this summer.

In early fall, when business at the warehouse is slow, he said misses talking to his little sister or listening to the rapper Gucci Mane while hanging out with his friends in southwest Detroit.

No customers stopped by the small warehouse on a sunny Wednesday afternoon in September.  But the fall harvest would soon bring busy days buying corn from local farmers and selling it to businesses that make tortillas and other products. 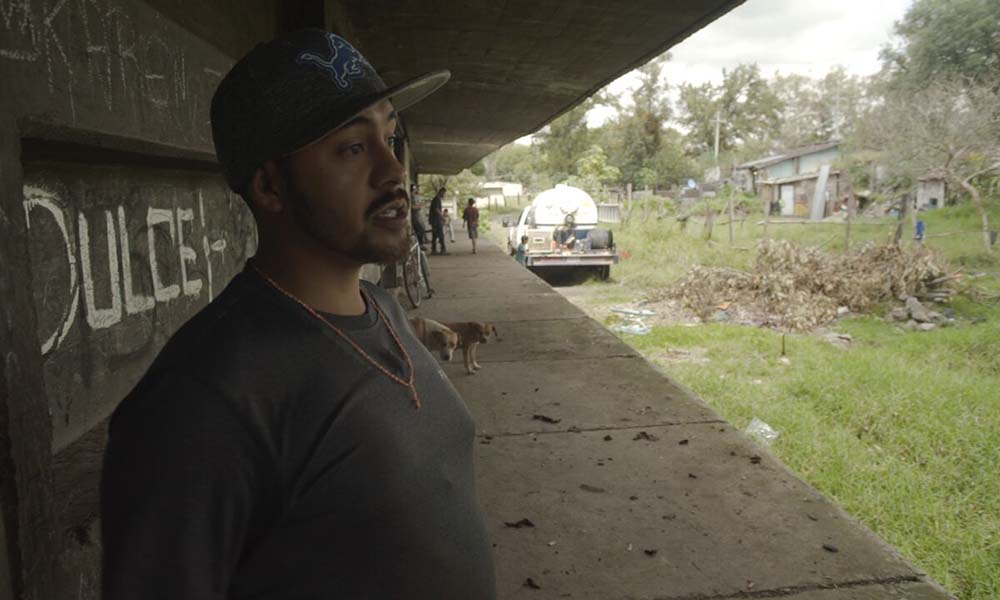 Jose Flores, 23, says he still hasn’t figured out what he wants to do with his life. He’s adjusting after deportation.

Until then, he planned to keep count of the 50-kilogram sacks of fertilizer in the warehouse and remodel a room in the house –  which doubles as the warehouse office –   into a conference room for customers.

Flores calls home to Detroit at least once a week. On Sundays, he tries to catch the Lions’ game online on his laptop.

“At first, I was pretty sad because I felt like I was leaving everyone behind - my family and friends. I don’t feel too sad (any more) because of the way my family took care of me when I got here,” he said.

“Who am I here? I’m still trying to figure that out. I guess right now you can say  my dad’s helper,” he said.

“I got to figure out what I want to do with my life.”

Sixteen million dollars for state and local taxes, when spread among 6400 DACA people living in Michigan works out to $2500 per person. That seems very high given that some are still in school, and others you read about do not have jobs that pay all that well.

As soon as you said he was arrested for DUI, I stopped careing. I mean you realize that drunk drivers kill and maim hundreds if not thousands of innocent law abiding citzens every year? People just driving to work, or taking there children to school, or sports practice dead or injured because people like this man think there better then everyone else and can ignore safety laws. Laws that are not bureaucratic, or ridiculous man made B.S., but laws but into place because driving a two ton battering ram at speeds greater then any natural born animal can achieve is dangerous at under the best circumstances but now you add alcohol or drugs into the mix. I can only say IMO people that drive under the influcence are selfish scum, and should be dragged out of there cars and shot on sight. Because everyone else on the road is at the whim of the drunks death sentence, with no notice or due process. So why should they get any if they are caught??? Especially the multiple offenders! Screw this guy i am HAPPY HE GOT DEPORTED! Just a example of the system finally getting it right!