Detroit Mayor Mike Duggan wins big. Does he have a mandate?

Incumbent Detroit Mayor Mike Duggan won about 72 percent of the vote in Tuesday’s election against state Sen. Coleman A. Young II, son of the the city’s first African-American mayor.

Detroit Mayor Mike Duggan won by a landslide, as expected. So did Flint Mayor Karen Weaver, providing fresh ammunition to the old adage about the advantages of incumbency.

Duggan thumped state Sen. Coleman A. Young II, the son of the city’s first African-American mayor, carrying 72 percent of the vote during balloting Tuesday. Weaver, who has faced criticism of her handling of the city’s water crisis and a trash hauling contract, easily bested 17 other candidates, allowing her to serve the final two years of her four-year term.

“(Voters) have short-term memory and opponents have to have a lot of money to beat them,” said Darci McConnell, president and CEO of McConnell Communications, Inc., a Detroit-based firm that often works on political campaigns but isn’t involved in this year’s elections.

“It’s the power of incumbency.”

In the days before the election, this photo surfaced on social media. State Sen. Coleman A. Young II this week publicly donned a hat, glasses and overcoat similar to those that his father wore when he was mayor of Detroit.

Takeaway One: Big win. What does it mean?

Detroit’s mayoral election always was a mismatch. Duggan raised nearly 50 times as much as Young, pulling in more than $2.5 million to the state senator’s $52,780.

Young ran largely on his father’s legacy and claims that Detroit’s comeback neglected large swaths of the city.  The message never resonated. Duggan expanded his margin of victory from the primary, when he won 68 percent of the vote.

“Seventy-five percent of Detroiters think the city is going in the right direction,” Duggan told reporters Tuesday night after his campaign party downtown.

How resounding was the victory? Duggan carried 587 of the city's 590 precincts, including all 100 absentee precincts, according to a Bridge Magazine analysis of vote counts released Wednesday afternoon. Duggan won 76 precincts with at least 80 percent of the vote, trouncing Young by a 5-1 margin in those precincts.

And while Young may have won three precincts, the total margin between them was only five votes. He tied Duggan in two other precincts.

But some question whether victory, however impressive, will give Duggan more of a mandate to push his agenda. The election win came just days after Duggan suffered a political defeat in Lansing, when he couldn’t rally Detroit representatives to support his plan to reform auto insurance rates that among the highest in the nation.

McConnell said voter turnout (about 21 percent) “puts an asterisk” by the victory.

Turnout topped predictions of 13-18 percent. Some attributed the lack of interest to satisfaction with the city, while other pointed to the caliber of the competition. Young mentioned his father throughout the campaign and, in the last few days, dressed like him and circulated a doctored picture on social media of the two shaking hands.

Takeaway Two: Name recognition is everything

In the closest Detroit race, incumbent Clerk Janice Winfrey edged computer engineer Garlin Gilchrist by less than 2,000 votes, according to unofficial results. Gilchrist had seemingly every advantage over Winfrey, the clerk since 2005. 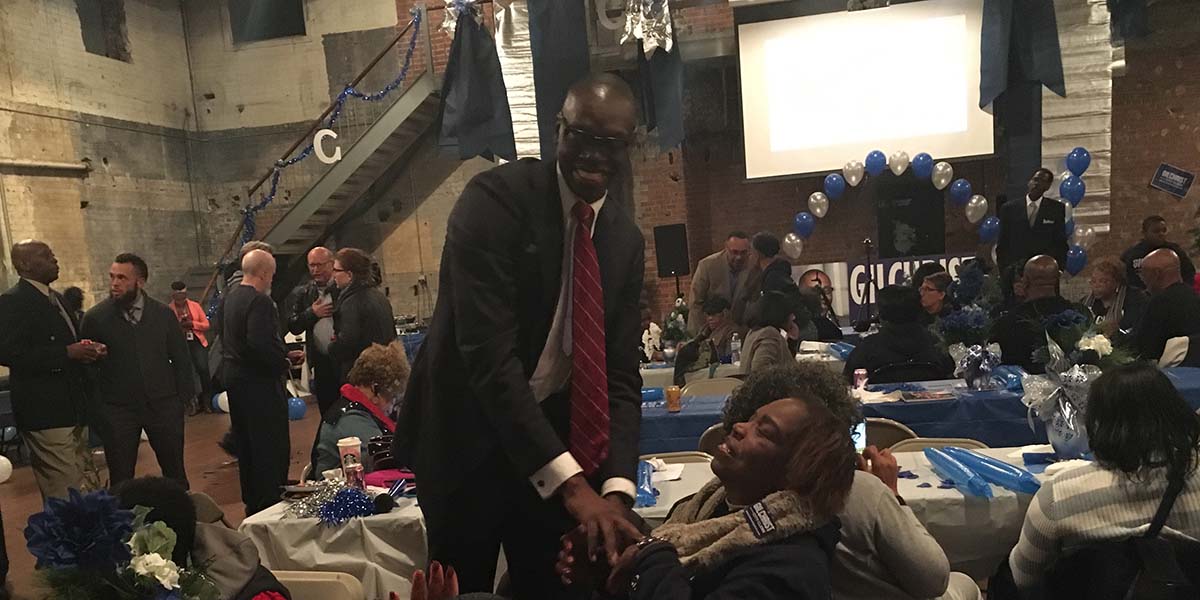 Garlin Gilchrist speaks to a supporter at his campaign event in Detroit. He was narrowly defeated in his campaign to unseat City Clerk Janice Winfrey.

Gilchrist raised $160,506 compared to Winfrey’s $25,000. She was battered by scandal, after voting irregularities in Detroit last year would have prevented a statewide recount of last year’s presidential campaign.

Gilchrist, who worked for Moveon.org and is the city’s former director of new and emerging technology, received far more endorsements and was praised by Detroit Free Press columnist Stephen Henderson as the embodiment of a “new Detroit” type of sophisticated political leaders.

It didn’t matter. For much of Tuesday night, he was comfortably in the lead, but Winfrey edged ahead by 10 p.m., thanks to overwhelming support from absentee voters who are typically older.

Morrow and McConnell said that Winfrey took a page out of the campaign playbooks of past clerks and didn’t spend much money campaigning. Instead, her office bought radio ads and billboards - featuring Winfrey’s voice and face - to talk about the new voting machines and to encourage people to vote.

“That raised a lot of eyebrows,” Morrow said. “I bet this may be last election anyone is going to be able to use that mechanism or abuse of public funding.”

“When voters were informed by (Gilchrist’s) media campaign, they voted against Winfrey,” Hood said. “ The only thing that helped her is he started his media campaign too late.”

But early Wednesday morning, Gilchrist had not conceded and his campaign was pouring over results and saying they found irregularities with absentee ballots, and mulling their next step.

All of Detroit’s incumbent council members were re-elected, but in one surprise, former state Sen. Virgil Smith was trounced, 59-39 percent, in his bid for District 2 against Roy McCalister, who used to head the Detroit Police Department’s homicide division.

Smith resigned from the Senate last year and served more than eight months in jail for malicious destruction of property for shooting at his ex-wife’s car.  He was placed on a five-year probation.

The race was well-watched because the seat is currently held by City Council President Pro-Tem George Cushingberry. He lost in the primary but ran as a write-in, receiving less than 500 votes.

“A McCalister win means not enough voters forgave Virgil. And it helps to run again and again to get some name recognition,” McConnell said.

The medical marijuana advocates behind the two ballot questions knew they were up against a tough opponent in the churches that rallied against them. But Tuesday’s vote puts the city on the path to not only have more marijuana shops, but also a chance to make money off of it.

One ballot question asked Detroit voters on Tuesday if the city should opt into the state’s new licensing law that would allow five new kinds of marijuana businesses from grow operations to dispensaries to open in the city. The change will allow the city to split a 3 percent tax on marijuana products with the county. Sixty percent of voters approved the measure.

The second question on Tuesday’s Detroit ballot dealt with zoning, asking voters to allow medical marijuana businesses to locate within 500 feet of a church or another marijuana business. It was approved by 58 percent of voters.

“Detroit wants the money,” he said.

Takeaway Five: Exception to the power of incumbency

Incumbent mayors haven’t won re-election in Jackson in more than a decade, according to local news reports. And the trend continued Tuesday when  Mayor Bill Jors lost his job to City Councilman Derek Dobies, who represented the sixth ward.

While Dobies was running for mayor, he also was the subject of a recall, which he did not fight to focus on the mayor's race.

A group collected signatures to recall Dobies after a tweet last February related to a petition that sought to stop the city from consideration of a non-discrimination ordinance to protect LGBT rights. The ordinance was part of a decades long struggle to prohibit discrimination based on sexual orientation and gender identity in employment, housing and public accommodations in Jackson, according to the Jackson News.

Dobies had tweeted, “Ppl signing NDO repeal petitions should know that their names + addresses will be publicly available under #foia. Watch what u sign!”

Dobies won 55 percent of the votes, or 2,259 votes, to unseat the incumbent and become Jackson’s next mayor.

Did anyone else find it interesting that there was no mention of "The motherland" or the invoking the name of a crack-head as factors for yesterday's mayoral race defeat in Detroit?

I would submit that was more of a factor on this race than Mrs. Dawsey is willing to acknowledge.

Why should those mundane issues be the focus. We looked up his record as a Mich Legislator and found outbhe hasn't done anything for Detroit. We are dealing with facts, not bluster and deflection.