SLIDESHOW: Click or swipe to see how Islandview is improving (or not) across a wide array of metrics...

Sandra Williams isn’t even going to lie. She wants money to buy some breakfast.

So she walks Mount Elliott several times a day, looking for change, but also engaging in non-stop banter and gossip with police and store owners. That’s given her a unique perspective on big changes underway in the Islandview neighborhood on Detroit’s east side.

A “Caucasian couple” is building a house on a vacant lot, she says. The city plans new park spaces. A woman was shot and killed last week. As Williams lists the changes, resting on a walker, two youngsters pedal down Mack Avenue on striking red bicycles from Mogo, the city’s new bike-sharing program.

“It’s so good to see more people in the neighborhood. They go by and I say, ‘Hey bikers!’” says Williams, 51, who describes herself as a disabled former addict. “I think there’s change coming, and it’s going to be good. We could use some positive change around here.” 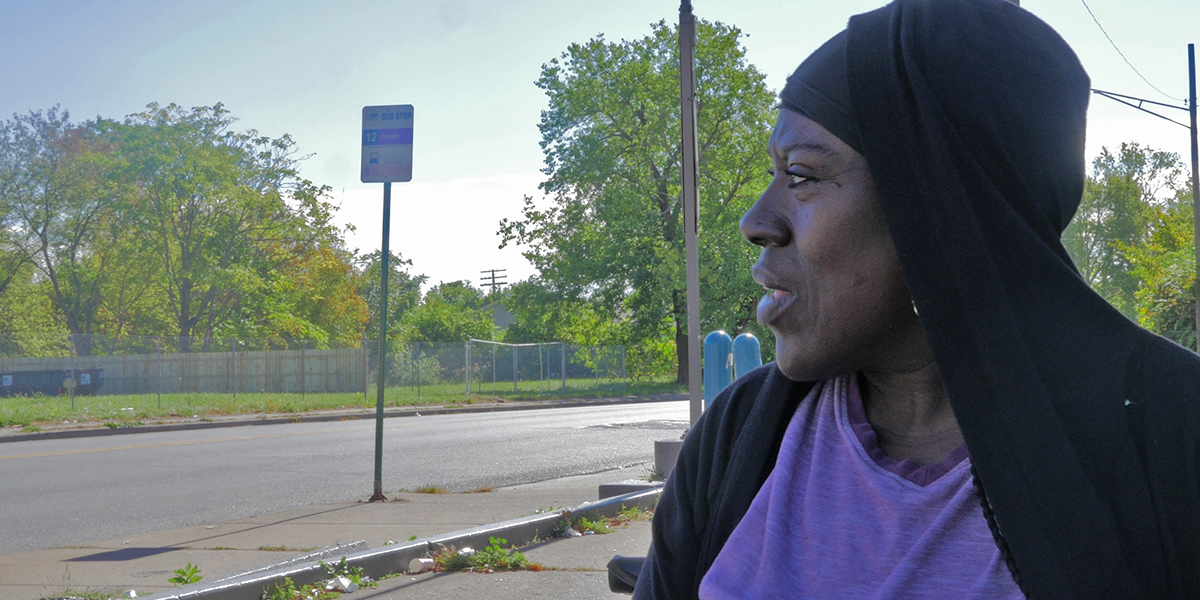 Sandra Williams, who walks up and down Islandview streets every day, says big changes are afoot in the neighborhood just north of Belle Isle. (Bridge photo by Al Lilly)

Just north of Belle Isle, alongside the wealthy Indian Village and trendy West Village, Islandview may be on the verge of radical transformation. Lofts along Jefferson Avenue list for $255,000; the city’s only Big Boy restaurant closed on Easter and will be razed for a new development; and rising rents were a top complaint during an August community meeting with city officials.

For now, though, parts of Islandview are as desolate as the most abandoned pockets of this vast city. Jeff Grant, for instance, has zero neighbors on his block of Concord. Surrounded by vacant fields, his duplex is one of two buildings on the block. The other one is vacant, Grant said.

It may not be for long, said Barry Randolph, pastor of the Church of the Messiah, which is nearby on Lafayette and East Grand. A minister who encourages entrepreneurship and self-reliance, Randolph buys and rehabs living spaces for the needy.

He can feel the tensions of the neighborhood. Parts of it are improving. Others aren’t. It’s a “two-edged sword,” Randolph said.

“We are torn between welcoming wealth, and a fear of displacement for longtime residents,” he said. “We’re in a state of metamorphosis.”

Much of the redevelopment is closer to Jefferson and the Detroit River. Up a few blocks, near Kercheval, is different story in the compact neighborhood of about 3 square miles and 6,500 residents.

In one four-block stretch, 215 parcels are vacant, including 91 structures, according to the city. Detroit planning officials view that as an opportunity and envision converting those fallow fields into green spaces, some of which could form a path to the Detroit River.

City planners are working with neighbors in Islandview, Indian Village and the West Village to make streets more walkable and add more retail and park options.

To Randolph, new investment means new energy for the Church of the Messiah’s multiple efforts to restore the city and neighborhood. He points to a wall hanging in the foyer of the church, a verse from the Old Testament book of Isaiah:

“You will be known as the people who rebuilt the walls, who restored the ruined houses.”

Foresight & the right info.
As Detroit redevlopes it is very likely that aside from the urban core, other areas will.

Current residents have to be watchful. The late Rev. Dr. Nicholas Sr took a stand back in the day when the area around where his church and other church's and businesses stand today near the E. Warren and the John R area - the Medical Center area were under the throes of urban renewal. As a political and social activist, he was well aware of what "urban renewal" could really mean. He and other activists and ministers got together and fought with the city of Detroit to retain some of that land because it had been occupied for many years by African Americans. It was part of Detroit's "Black Bottom". During historical times of urban renewal, it has been said that "Urban renewal means Negro removal". The one fact of tbe matter is that urban renewal drives the prices in the area up and a certain faction of residents can be "priced out". Keep abreast of urban renewal and prices. Look at what is happening in the Downtown Detroit area in terms of prices. Stay informed.

Agreed. Watchfulness is important. MEBCA announced several months back that investors have been calling a number of residents in the area to buy their homes and warned against selling too quickly. For my wife and my part, as Ms. Williams' "Caucasian couple," we have been trying to reach out to neighbors since we bought the land next to Grandy's to build our home. I think it is perfectly reasonable to be concerned and to demand information on every new development in Islandview, the MEBCA area especially as it had been ignored, even pushed out of neighborhood discussions for so long. And I include myself in that equation. My wife and I are newcomers and one train we joined MEBCA last year was to connect with our soon-to-be neighbors and face those questions and concerns as early as possible.

Great article, however, the story that was written about the woman who was killed is from October 2014. Always good to check links!

Thanks so much! Working to get the right link in there. We appreciate it.