Tax foreclosures have ravaged this block of Monte Vista on Detroit’s west side. All but seven of 22 homes have been seized for nonpayment of taxes and fallen into disrepair or been razed. (Bridge photo by Sarah Alvarez)

Wayne County doesn’t always enforce a law that forbids tax delinquents from buying properties at its tax foreclosure auctions, contributing to a cycle of speculation that perpetuates blight, a Bridge Magazine investigation has found.

The county’s failure to do simple due diligence on the 3,000-plus buyers at its annual auctions means some of the biggest bulk buyers are able to add more homes to their portfolios year after year without being current on taxes, despite a 2014 state law intended to end the practice.

Other counties, such as Oakland and Genesee, have safeguards to prevent delinquent owners from buying at tax auctions. But Wayne County, which has sold close to 150,000 parcels since 2002, has allowed investors to buy cheap homes, do no repairs and avoid paying taxes until they are foreclosed again, Bridge found.

The foreclosures have fundamentally changed scores of Detroit blocks including Monte Vista Street on the city’s west side. Ten years ago, there were 22 homes on Cassandra Williams’ block. All but seven have been tax foreclosed, records show, and are now blighted or have been demolished.

Williams lives next door to a home that a bulk buyer bought a few years ago even though his company owed taxes. Now, the house is in squalor and is one of 6,000 properties for sale in the county’s online tax auction, which continues until the third week in October. Bidding starts at $500.

“I don’t like them selling all these properties to unknown people who never come out and who never do anything with it,” Williams said. “Now, nobody is going to want to buy that house.”

State law requires counties to foreclose and sell properties that are three years’ delinquent in taxes. Oakland County Treasurer Andy Meisner said the 1999 law  did not “anticipate a housing and foreclosure crisis with this kind of volume.”

“The public auction simply doesn’t allow for a foolproof system of connecting that property with its highest and best use,” Meisner said.

Sabree said “we check for the names and the company names” to prevent tax delinquents from bidding at auction. After the auction, the county checks backgrounds of buyers by matching their names with a database of delinquent taxes and blighted properties, Sabree said. 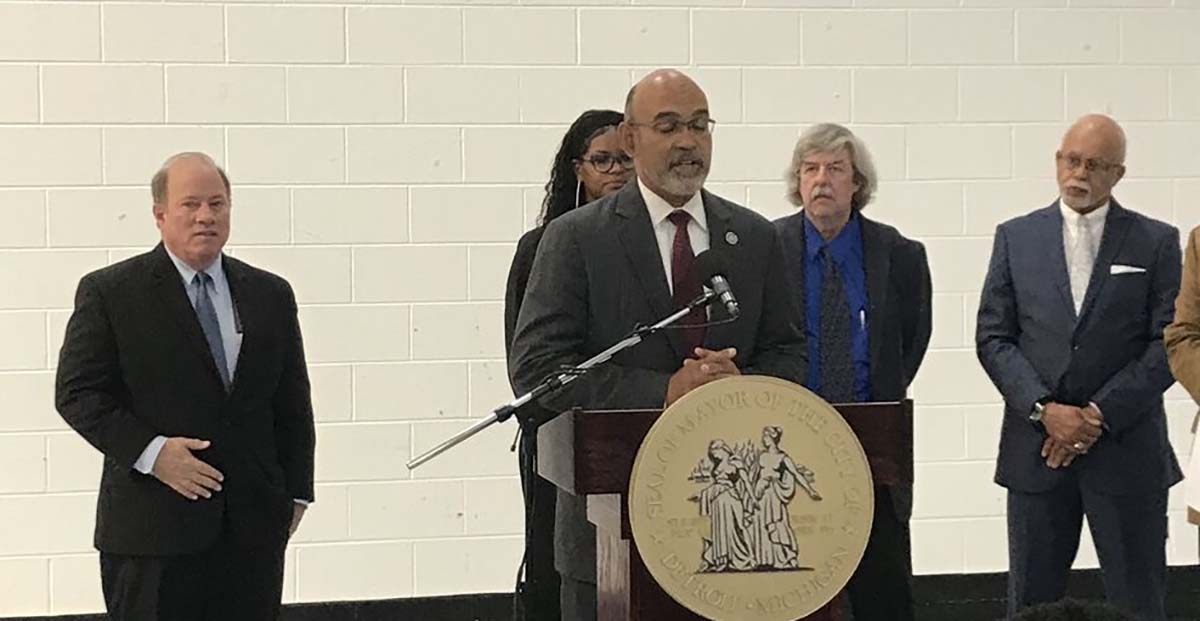 Wayne County Treasurer Eric Sabree, at podium, says he may hire more staff next year to check whether bidders at the county’s tax auction owe taxes. Last month, he announced that outreach efforts have lowered the number of owner-occupied homes for sale at the auction. Among those with him are Detroit Mayor Mike Duggan, at left, and Wayne County Executive Warren Evans, at right. (Bridge photo by Sarah Alvarez)

Buyers who owe taxes are sent notices to “to advise they must pay delinquent taxes in order to be provided with deeds,” Sabree wrote in an email. He acknowledged, though, that “very few” buyers have been barred because “most of them go and reorganize into other LLCs and other entities to avoid detection.”

Next year, the county is “looking into bringing temporary staff” to help with the checks, said Sabree, who was appointed treasurer last year after several years as a top deputy.

Related: Sorry we foreclosed your home. But thanks for fixing our budget.

Using nothing more than simple Google searches and checks of county records, Bridge found that four of the five top buyers in the 2015 auction bought properties from the county auction last year while their taxes were delinquent.

Together, they bought more than 1,000 properties, and four of those buyers still owe taxes this year, county records show.

What’s more, a random search of 10 of the 126 buyers who bought 10 or more properties last year found that six owed taxes on homes they bought at previous auctions, while another four transferred properties to other companies or limited liability corporations that are now delinquent in taxes.

In most cases, Bridge’s online searches took less than 10 minutes apiece because buyers made little or no effort to conceal their identity, bidding or buying properties under corporate names that had long paper trails of delinquencies.

Critics say the lack of oversight has hurt, especially in Detroit, which is home to the vast majority of Wayne County’s foreclosures.

“The last two years I’ve seen some of the payment plans offered by the county make a big difference,” said Detroit City Councilwoman Mary Sheffield. “But the damage is here. A lot of damage has been done.”

The majority of homes in Detroit are now occupied by renters, and advocates say the tax auction provides a continuous stock of homes for landlords.

“We are already seeing tenants being threatened with eviction from landlords who bought in the auction this year and don’t even have the deed to the property yet,” said Oberholtzer, the anti-foreclosure advocate.

‘It’s a mystery what goes on there’

Companies affiliated with Stevey Hagerman have acquired about 1,000 homes in Detroit through the tax auction. One of those firms, Detroit Motor City Fund LLC, bought 106 properties out of auction in 2015 for $221,189, records show.

The delinquent tax bill for those properties is now nearly $37,000, according to county records.

Companies affiliated with Stevey Hagerman have acquired about 1,000 homes in Detroit through the tax auction. Until recently, he said Wayne County made no effort to see if his companies owed taxes before bidding, as is required by law.

Even so, Hagerman’s companies picked up 287 properties, the records show. And this year?

“We are going big, if not bigger. (We) just picked up another 135 (properties,)”  said Hagerman, who works as regional manager of a real estate investment firm, Brick Home Management. His father, Stephen Hagerman, is the firm’s CEO.

Stevey Hagerman contends his company stays up to date on taxes –  and properties that are delinquent are usually because the occupant has a land contract. That makes tenants responsible for the property, Hagerman said.

Related: How to cash in on a crappy home. Step one: Find a sucker to sign a land contract.

When Hagerman first spoke to Bridge last month, he said he had never been challenged on any outstanding taxes or had to explain the company’s debt.

“It’s a mystery what goes on there,” he said, referring to Wayne County.

After Bridge inquired about the debts to the county, however, Hagerman this week said the county demanded payment for back taxes.

"Just this past week or so they are now claiming it’s a state law that if a bidder has any back taxes then they must pay those in full to receive deeds for winning bids this year,” Hagerman wrote in an email.

“This is a group of investors that are completely separate from previous years. So now I have to explain to them we can't get deeds to properties because there are back taxes attached to my name.”

‘Nobody is going to want to buy that house'

On Detroit’s west side, Williams lives next door to a house the Hagermans bought in 2014’s tax auction for $500. Taxes were never paid, so it was foreclosed and again is for sale at the county’s ongoing auction. 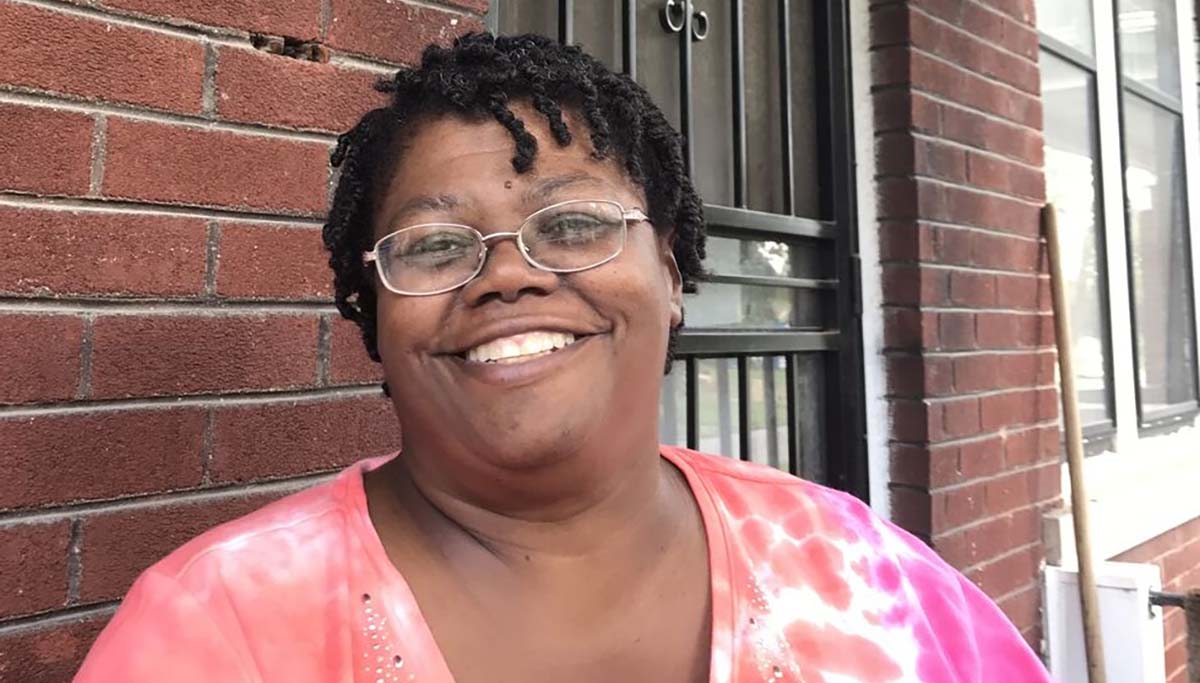 The home has been empty since 2014 except for occasional squatters, Williams said. Trash is spilling out of the unlocked front door and into the yard.

WIlliams and the block club she leads mowed the grass and shoveled the snow at the home until last year. That’s when she got fed up and tracked down the owner.

Steve Hagerman responded with a letter in October of last year .

“I no longer own that property” the letter reads. “Wayne County took the home back for redemption. Please contact Wayne County about the home from here on out.”

The letter does not mention that the county “took the home back” because Hagerman did not pay taxes.

“Unfortunately, once or twice a year mistakes are made in the auction,” Stevey Hagerman told Bridge.

The other house next to Williams is empty and boarded as well. It was transferred to the county by the Detroit Land Bank after three mortgage companies swapped in the subprime scams of the 2000s and didn’t pay taxes.

Cassandra Williams lives next door to this house on Monte Vista. It was bought out of tax foreclosure in 2014 for $500. It’s up for auction again this year because its taxes weren’t paid. (Bridge photo by Sarah Alvarez)

She said she tries to maintain her property and feels let down by government.

“Both the city and county need to step up,” Williams said.

Other counties have safeguards

Stepped-up enforcement might be complicated by the size of Wayne County’s auction, which is the largest in the state and, by some accounts, the nation. In 2015, for instance, 36,812 properties were up for auction.

In Oakland County, Meisner said his office auctions nearly 500 parcels per year, and employs a “trust  but verify” approach to auction buyers to “level the playing field for family purchasers and principal resident purchasers against the speculators.”

Meisner said his auction is conducted in person, rather than online, to prevent abuse. He also bars those who have faced tax foreclosure and checks to see whether bidders owe taxes or face ordinance violations for not maintaining their properties.

In Genesee County, Treasurer Deb Cherry said her office won’t finalize auction sales until after buyers have been checked for back taxes.

“We really don’t have an issue with people who owe taxes bidding again in our auction. Because we check,” said Cherry, whose auction also sells about 500 properties.

The system is essentially the same that Wayne County says it is using. Cherry acknowledged its limitations.

“There are probably ways around it, and we can only check (taxes) for our county,” Cherry said. “We have no idea whether or not somebody buying here owes somewhere else.”

In Wayne County, Sabree said buyers often use a maze of companies and corporations to cover their tracks.

Using only county information, it would be virtually impossible to tell who owns the company. It isn’t registered in Michigan and lists its address as a “virtual office” firm in a Las Vegas office located on a road named “Painted Mirage.”

A tangle of far-flung records, though, shows Daniel Menake lists himself as managing member of GPAM on a quit claim deed transferring property to another company for which Menake is also listed as a managing member.

Menake is an investor based in New Jersey who sells Detroit real estate online. GPAM has sold most of the properties it bought in the 2015 auction, but all but one of the 19 that it still owns is tax delinquent, records show. The bill for his properties is at least $35,964.

Developer Herb Strather, who says “he’s done more deals than any Detroiter,” said Sabree has helped reform the auction and is responsive to concerns.

Strather said many investors buy too many properties and end up owing taxes –  including himself.

“We still carry properties that have delinquent taxes,” he said.

Sarah Alvarez is founder of Outlier Media, a journalism service filling information gaps for low-income news consumers in Detroit. To see if there is a back tax bill for your Detroit home or to connect with a journalist about housing, tax, or utility issues in Detroit, text DETROIT to 63735.