SLIDESHOW: Click or swipe to see how Warrendale is improving (or not) across a wide array of metrics...

Max Selene was desperate. Living in Miami, he faced a series of financial problems and Googled “cheap houses for auction.”

He discovered Warrendale, a working-class neighborhood on Detroit’s far west side, and a two-story colonial that he said resembled a “garbage dump.” He still can’t get over the purchase price: $1,400.

Like many neighborhoods in Detroit, Warrendale is in transition. Battered by blight and the foreclosure meltdown, the enclave of modest homes between the Southfield Freeway and Rouge Park is beginning to see new neighbors of Middle Eastern descent from adjoining Dearborn and Dearborn Heights, as well as Latinos from Southwest Detroit.

“I don’t feel like we’re part of a renaissance at all,” said Christine Hines, a 20-year resident and retired General Motors Corp. line worker. 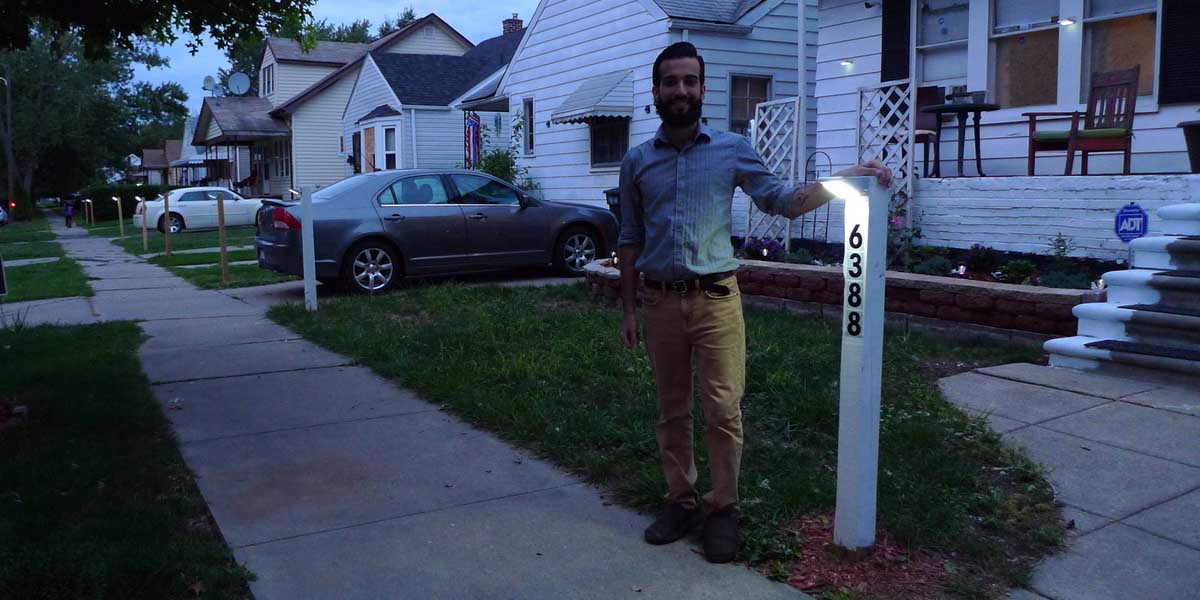 Max Selene beside of the sidewalk lights he installed in his front yard after a wind storm knocked power out in the neighborhood. (Bridge staff photo)

The neighborhood’s crime rate has increased, and its population has dropped 13.5 percent  since 2011 to 17,325, according to the U.S. Census.

“We hear gunshots all the time. There’s just a lot of riffraff up and down the street,” said Roshondal Dortch, a home health care aide who lives in her mother’s home on Warwick near West Warren.

“The police drive down the block once in awhile but I can’t say it’s getting better. If anything, it’s getting a lot worse.”

When her mother bought the house more than 20 years ago, she was only the second African-American in a neighborhood that was white, Dortch said. She now lives across the street from a home decorated with four flags and signs featuring Arabic lettering and icons.

Many of the newcomers keep to themselves, Dortch said. That’s partly because of the churn of residents since the real-estate crash that began a decade ago: 46 percent of Warrendale’s homes, 4,100, have gone into tax foreclosure since 2012, according to Wayne County records.

Selene said he’s committed to making a difference. He and his husband, Corey, renovated the home on Auburn Street. And when a ferocious storm hit southeast Michigan in March, the neighborhood was without power for six days.

The couple installed a pair of chest-high, solar-powered, motion-detecting lights at the sidewalk in their yard. By day, the lights gather and store power. As night falls, they glow with a soft light. When a person walks by, they briefly shine brighter, lighting the sidewalk and surrounding area.

They’re trying to raise $5,000 to light the full, 19-block length of Auburn Street. A GoFundMe campaign has raised about 10 percent of that amount.

“As soon as I saw the kids playing under them, making them light up, I knew we had a good thing,” Selene said.

Some thinking by those mentioned in these articles is a little twisted. First you have the Warrendale area screaming for improvement, and then you have a planner talking about a 26 mile bike path throughout the city. Is this the same type of path where women riding bikes were recently attacked and raped in broad daylight? If you want the city to improve, you have to clean up the crime. Who in their right mind would want to move to an area with an increasing crime rate. Crime by itself perpetuates more crime.