Bob Nelson and neighbors work together to keep weeds and tall grass at bay at the sites of old buildings in Detroit’s Jefferson Chalmers neighborhood. Keeping the street clean and grass cut helps neighbors connect with each other and feel safer, Nelson said.  (Bridge photo by Robin Erb)

DETROIT –  Once a home, this single-story structure now is little more than splintered wood, shredded tar paper and a single, last window that dangles dangerously overhead. But the lawn?

City demolition crews have razed so many vacant homes here along this stretch of the Jefferson Chalmers neighborhood on Detroit’s east side that Nelson recently traded in his push mower and bought a commercial-grade riding mower.

Neighbors volunteer to pitch in, too, the retired custodian said.

“We look out for each other, and part of that means keeping the grass down. I’m blessed to be able to help that way,” said Nelson, 72.

In a way, the scene last week captures the results of two recent studies that looked at Detroit’s blight fight and its effect on the city.

Both studies — one from researchers at the University of Michigan and Harvard University and the other from Wayne State University — suggest the nearly 19,000 building demolitions since 2014 have reduced nearby gun-related crimes.

That’s “encouraging,” said Brian Farkas, director of special projects for the Detroit Building Authority, which oversees demolition and construction for the city.

“We’ve pushed very hard to go as fast as we could go with this program, and this ... validates those efforts,” he said.

The studies, though, aren’t conclusive, and come as federal funding for the demos, which have cost some $250 million, is winding down. Duggan plans to ask voters in 2020 to approve a $200 million bond issue to continue the demolitions, saying he wants the city to be blight-free by 2024.

Since 2014, Detroit has knocked down more than 18,000 residential and commercial structures, according to a city website updated daily. According to a new study led by a University of Michigan researcher, the effort may have driven down gun-related violence, too.

The demolitions are a key component of Duggan’s focus on beautifying Detroit, reducing crime and adding green spaces to crowded neighborhoods.

But they’ve also spurred a federal investigation into accusations of bid-rigging; financial mismanagement and the use of contaminated dirt backfill holes left by the demolition –  and been linked to rising lead levels among Detroit children because of the clouds of dust created when buildings topple.

The studies also offered cautionary notes about the demos.

The most recent study –  the U-M/Harvard review – found that neighborhoods with a larger proportion of non-Hispanic white residents had more demolitions.

And the Wayne State authors late last year noted the possibility of “diminishing returns.” While “concentrated demolitions” are linked with crime reduction, “we still need to answer whether razing Detroit is actually raising Detroit,” authors wrote.

The study from U-M and Harvard’s T.H. Chan School of Public Health concluded that homicides and injuries caused by firearms fell 11 percent in areas where six to 12 homes were demolished, compared to similar neighborhoods.

And it doesn’t appear the crimes were displaced to other areas, according to the study, which broke Detroit into census block groups (about 15 occupied blocks) and studied 343 areas with at least six demolitions from Jan. 1, 2014, and Sept. 30 2015, said Jonathan Jay, a scholar with the Firearm Safety Among Children and Teens coalition based at U-M and the lead author of the study.

Jonathan Jay’s research team compared 343 Detroit areas with moderate to high demolition rates against a control group. They found drops in gun violence, but they also noticed this: Being non-Hispanic and white upped a resident’s chance of being in a neighborhood that drew the city’s demo crews. (Courtesy photo)

Researchers compared homicides and aggravated assaults involving a gun, as well as drug-related offenses from those areas with a control group of another 343 areas with similar demographics and socioeconomics. The researchers analyzed crimes between January 2009 and November 2016,  allowing them to study trends before those first demolitions and for 14 months after the demolitions.

Curiously enough, the U-M researchers found that there were no similar drops in gun-related violence in areas that had the highest number of demolitions, 13 and over.

It’s not clear why, said Jay, whose study, “Urban building demolitions, firearm violence and drug crime,” appeared this month in the Journal of Behavioral Medicine.

“Our best guess is that a moderate demolitions has the effect that you’re looking for – the appearance that a neighborhood is cared for,” he said. “But in a place that you demolish many, many structures, it becomes harder and harder to maintain and monitor them. Maybe the neighbors on either side can take care of the vacant between them, but not the lots on either side of them as well.”

Like the U-M and Harvard researchers, Wayne researchers found no significant change in drug crimes, though it’s unclear why.

Jay said more research is necessary. He theorizes that knocking down hiding places may have driven down drug offenses overall, but that drop was offset as dealers were forced into the open and more likely to be arrested.

For the crime statistics that did drop, the reasons are more complex and less tangible than the removal of crumbling brick and mortar where criminals set up shop or hide.

After all, the removal of a building means a new vacant lot, and “even vacant lots are routinely used as vacant hiding places. It’s a good place to throw a drug stash if a cop comes by,” Jay said.

Rather, driving out crime after demolition is “about social processes,” Jay said.

“Collective efficacy is one of the best explanations for the reductions of neighborhood violence. It’s the idea that neighborhoods feel empowered or activated to improve their neighborhood,” he said.

Farkas, of the Building Authority, agreed that demolition is only part of the battle. Neighbor involvement is critical, and it’s evident in Detroit, Farkas said.

By the end of last week, 13,117 side lots have been sold to neighbors since 2014, including 3,273 lots where city crews demolished old homes, according to the city.

After the demo crews leave

James Jackson, a retired police officer who goes by the name of Jack Rabbit, recently rolled through Detroit’s east side in his silver Jeep Wrangler, his police scanner crackling, video surveillance camera rolling and his cell phone at the ready.

Demo crews were especially busy along some of those  streets, according to the U-M study.

The demolition blitz in recent years has engaged neighbors like Nelson and the rest of the Philip Street South End block club, said Jackson, 71, who also is chairman of the Jefferson Chalmers Citizens District Council.

They have become crime fighters whose weapons are a passion for their neighborhood, a sharp eye and lawnmowers, he said. 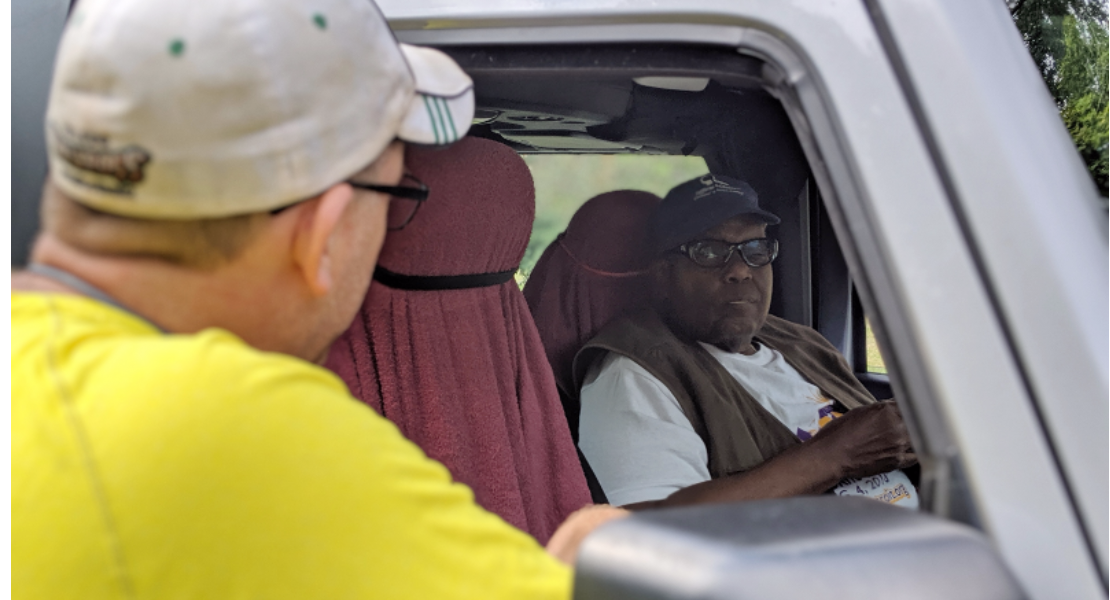 Jim Plieth, a firefighter who said he’s rehabbing a Detroit house so he can move into Detroit, exchanges information with James “Jack Rabbit” Jackson, a retired Detroit police officer, about an unknown vehicle seen around the neighborhood.  (Bridge photo by Robin Erb)

Just around the corner from where Nelson and Jackson chatted, Jim Plieth, a Detroit firefighter, 46, was getting ready to mow the lot next to a property he’s rehabbing so he can move into Detroit from Macomb County.

Plieth flagged down Jackson in his Wrangler, and the two men exchanged information about an unidentified car making its rounds lately in this neighborhood.

Plieth said he’s encouraged by what he sees not only in Jefferson Chalmers, but elsewhere in Detroit. Removing blight removes kindling for fires that have plagued the city for decades.

“Listen, [after] 24 years, I’m tired of fighting fires in this city. I’m glad to see buildings coming down,” he said. 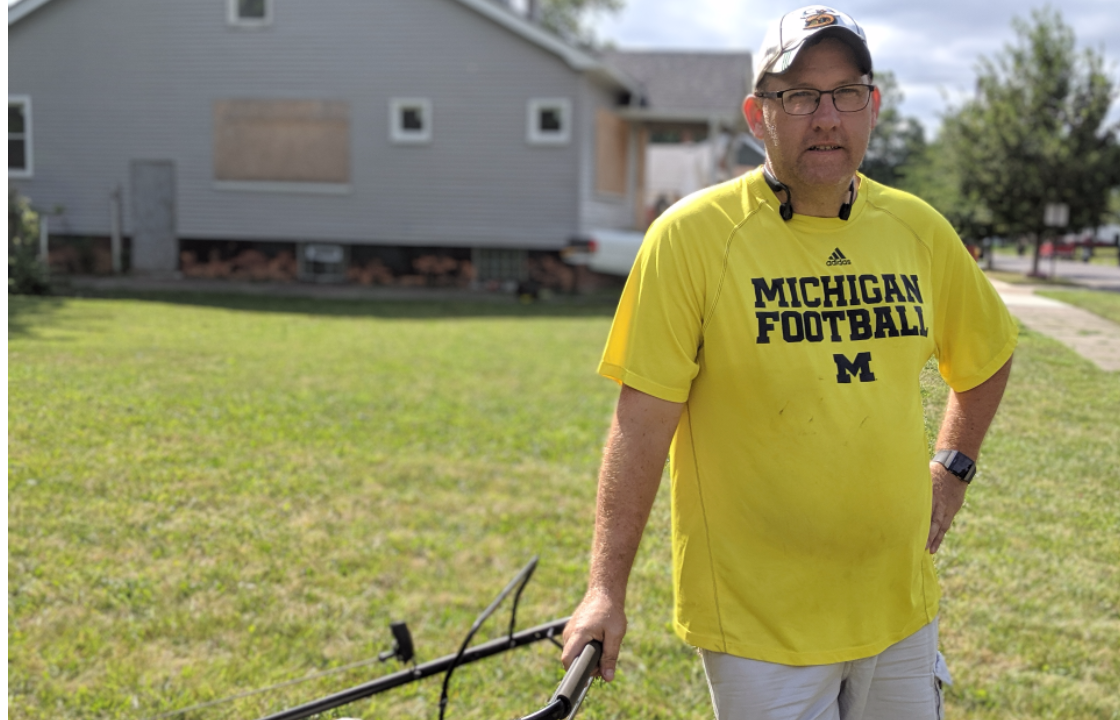 Jim Plieth mows not only the grass around the structure he is rehabbing for his home, but also a side lot.  (Bridge photo by Robin Erb)

Certainly, there are large swaths of the city where vacant homes and weedy lots have left neighbors fearful and unsafe, said Willie Bell, a Detroit police commissioner, who was  along for the ride this day with Jackson.

“Some neighborhoods are still untouched. It looks like a war zone,” Bell said. But he has a lot of hope for Detroit, he said.

Demolition has made “a drastic impact, that is certain. It makes residents feel they can reclaim their neighborhoods.”

Detroit Mayor Mike Duggan invited scooter companies to set up shop last year. Now, the city and others in Michigan are grappling with the consequences.

Detroit wants to extend comeback to neighborhoods. So far, it’s a slow go.

Detroit Mayor Mike Duggan’s marquee project to revitalize the Fitzgerald neighborhood is far behind schedule. What does that mean for the rest of the city?

Bad blood between Mike Duggan and his former health director, Abdul El-Sayed, explodes into the open, as Democratic governor candidate says his former boss 'poisoned kids' by ignoring health hazards of Detroit demolitions. In response, a spokesperson for Detroit’s mayor accused El-Sayed of ‘saying anything’ to get elected.

You have to greatly admire Bob Nelson, James Jackson and Jim Plieth. It is people who make a city. And if more people like this "care" about Detroit, things will continue to improve.
How do you eat an elephant? One bite at a time. The steps these gentleman are doing are "one bite at a time", but eventually you can eat the elephant.
Minor one for Bob Nelson - hopefully the city has looked into planting clover on vacant lots. Stays short so therefore little or no mowing needed to keep things looking good. The city of Saginaw I believe is trying this approach on some of its vacant lots.

I'm afraid that the City of Detroit is an elephant that doesn't get smaller as the people you mention take their bites.

Duggan has a more nerve than the law will apparently allow. Hizzoner has the audacity to ask the overtaxed and underserved citizens of Detroit to back 200 million dollars for additional demolition when the Feds have all but caught his hand stuck in the cookie jar with respect to the 250 million dollars in Federal demolition monies.

I was an Industrial Hygienist before I retired, I use to inspect houses in Detroit for Asbestos>>>> Under Archer, KK and Duggan. The total cost to demo a house was$10,000.00 under Archer and KK>> It went up to $27,000.00 with NO more the 50% of the homes still having friable asbestos still in them under Duggan!!!! 20 to 30 years from thanks to Duggan people will start having Lung problems!!!!!!