Despite assertions from Detroit Mayor Mike Duggan that claims of injuries from e-scooters are ‘BS,’ injured riders increasingly are showing up at Detroit emergency rooms. (Bridge photo by Anthony Lanzilote)

Duggan, the former CEO of Detroit Medical Center, also told attendees of a CityLab Detroit event that few if any injuries have been confirmed from the e-scooters.

In fact, the Detroit Receiving Hospital –  which is part of the DMC – averages 10-20 patients per month in its emergency room because of scooter accidents, Dr. Robert Klever, medical director of the department, told Bridge Magazine.

“I don’t think people quite understand the level of injuries that can happen with this,” Klever said.

“It’s not a matter if there’s going to be a death, it’s just a matter of time. Given the types of injuries and the pattern of injuries, it’s very clear to me it’s going to happen.”

The comments come as a growing body of research indicates very real safety concerns in the 100-plus cities nationwide with e-scooter services such as Lime and Bird.

It’s not a matter if there’s going to be a death, it’s just a matter of time. Given the types of injuries and the pattern of injuries, it’s very clear to me it’s going to happen.”

A study released this year documented 249 scooter injuries in two Los Angeles hospitals over two years, noting more than 40 percent were head injuries and only 4 percent of patients wore helmets. More than 80 percent were injured falling off the scooters.

In Austin, Texas, there were 192 scooter injuries in three months in 2018; nearly half involved head injuries and fewer than 1 percent of injured riders wore a helmet, according to a Centers for Disease Control and Prevention study of scooter riders.

Since April, Detroit Receiving Hospital’s trauma registry has recorded 18 cases with scooter injuries. Those involve patients with injuries serious enough to be admitted into the hospital.

Among other scooter injuries, the hospital has treated a leg fracture, broken ankles, a torn knee ligament, a dislocated shoulder, a bilateral knee contusion and kidney hematoma. The most serious case was a skull fracture with intracranial bleed, suffered by a rider who was on her way to an Elton John concert at Little Caesars Arena last fall. She didn’t get to see the show, instead being hospitalized with an epidural hematoma. 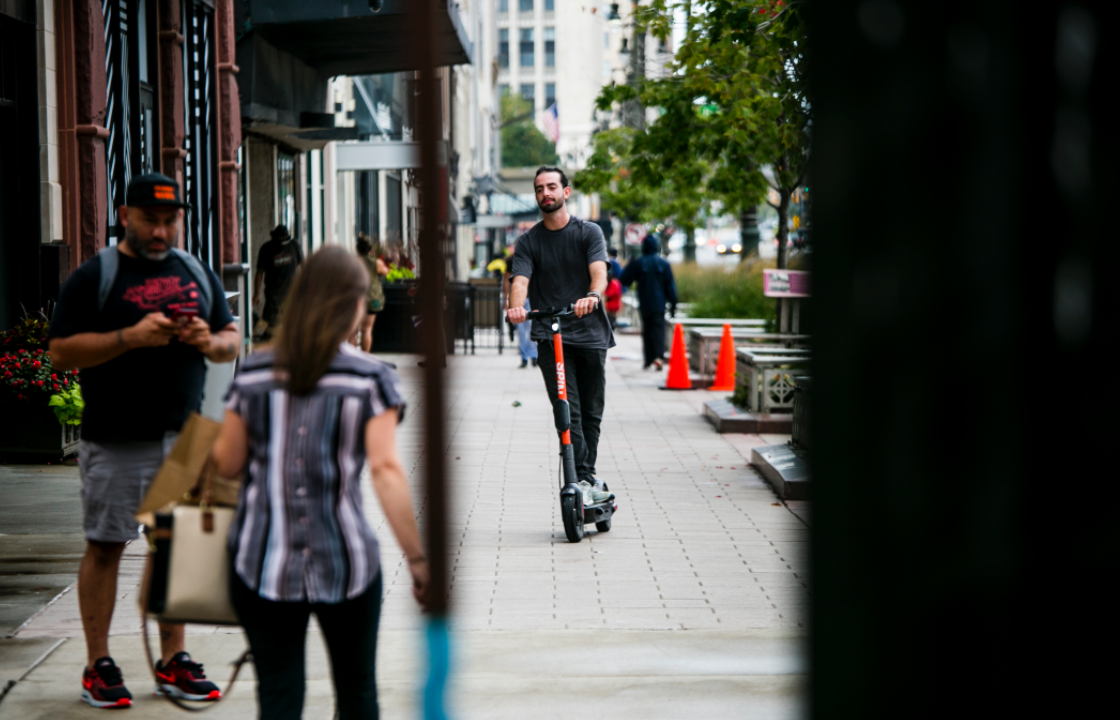 Studies have shown that only a small fraction of e-scooter riders wear helmets. Companies that rent the vehicles are giving away helmets and offering safety lessons. (Bridge photo by Anthony Lanzilote)

In downtown Detroit, such environments are sometimes in short supply.

“Small wheels get sucked up by potholes — and we do not have the best sidewalks,” said Todd Scott, director of the Detroit Greenways Coalition a group that advocates for green spaces and bike lanes.

The injuries have attracted some lawsuits, including a class action in California accusing the companies of “gross negligence.” The companies have issued statements saying safety of riders is their top concern. Bird has cast doubt on some of the studies, saying they are limited and don’t take into account the “sheer number of e-scooter trips taken.”

David Strickland, chairman of the global safety advisory board of Bird, wrote this year that a study in Portland, Oregon, found e-scooters don’t pose “disproportionate risk” compared to other types of transportation, despite what he called “outside attention” to injuries from the media.

“This heightened attention understandably comes with the territory of being new and exciting,  whereas the story of the numerous injuries and deaths caused by cars is all too familiar,” Strickland wrote in a report in April that recommended cities maintain smoother streets and add more bike lanes to reduce injuries.

“With sensible regulation and safe operational parameters, e-scooter sharing can live up to its demonstrated ability to provide a more equitable, sustainable, and convenient way to meet the urban travel demands of today,” the report continued.

Rayman Mohamed, a Wayne State University professor of urban studies and planning, said the lack of rules or training about scooters contributes to safety problems.

“Scooters usage tends to be spontaneous. When you’re going for a bike ride, you make the decision to leave home with a helmet,” he said. “With scooters, generally, many riders are caught in a situation where they have to get from point A to point B and didn’t come prepared for that.”

“We’re continually trying to figure out how we can make streets safer for all users whether person is riding a scooter or driving a car, or a pedestrian or a cyclist,” he said.

Bird requires riders to confirm that they are 18 or older, and has instituted mandatory app-based safety quizzes before a user may ride. The companies also require riders to agree to long legal contracts before riding (Bird’s is more than 7,000 words long; Lime’s tops 18,000 words.)

The company also offers free helmet giveaways, and its app offers a “community mode” that allows people to report improper riding. Lime also intends to offer real-life classes in Detroit, where newbies or veterans can get hands-on training, in addition to their standard digital tutorial for new riders. 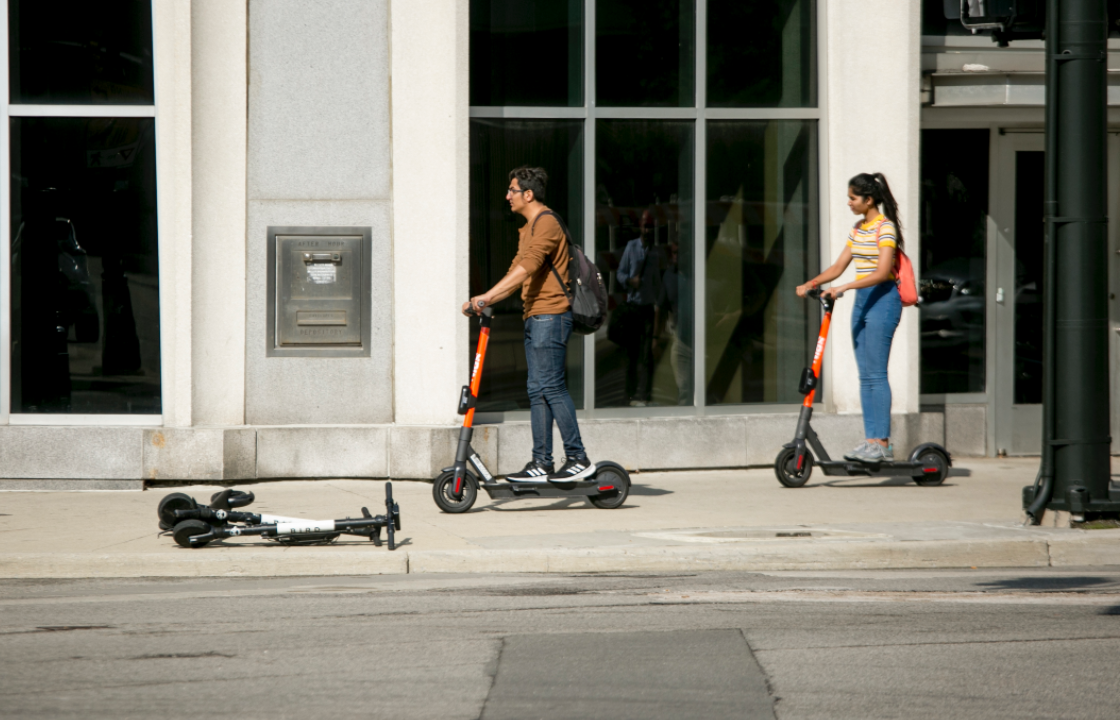 The Detroit Medical Center issued an advisory saying e-scooter riders should stay on “smooth, paved surfaces without traffic.” Those areas are sometimes in short supply in Detroit. (Bridge photo by Anthony Lanzilote)

Megan Owens, executive director of the Transportation Riders United nonprofit that advocates for public transit, said safety concerns are real, but not exclusive to dockless e-scooters.

“I’m less concerned about the danger they pose and more about intersection of different modes. With so much of our streets and the places we travel, it’s either just for cars — and everybody is in their two-ton metal bubble — or it’s just for walking,” she said.

“Bicycles and scooters are in the same category of in-between — they’re too fast to really work well on sidewalks but also not as big or as well protected as cars — that’s where the bigger challenge is. If we had more bike lanes or were used to seeing a wider variety of types of getting around, it might be less of a challenge.”

Bird reached similar conclusions in its safety report, arguing that its rate of injuries of 1 per 27,000 miles traveled is similar to that of bicycles, which the company found resulted in 1 emergency room trip per 17,000 miles.

Detroit Mayor Mike Duggan invited scooter companies to set up shop last year. Now, the city and others in Michigan are grappling with the consequences.

Two studies suggest homicides and aggravated assaults in Detroit dropped more in areas with moderate demolitions. The research, while inconclusive, comes as the mayor prepares to ask voters for more money for the demo blitz.

Memo to Mike Duggan: This is the real state of the City of Detroit

Key metrics measuring the health of Detroit –  income, home values, poverty, foreclosures – show real progress since Mike Duggan became mayor in 2013. But he also benefits from starting at one of the worst periods in the city’s history.

"Among other scooter injuries, the hospital has treated a leg fracture, broken ankles, a torn knee ligament, a dislocated shoulder, a bilateral knee contusion and kidney hematoma. The most serious case was a skull fracture with intracranial bleed..."

So much of this piece is focused on riders not wearing helmets, I'm curious, in what way would a helmet have prevented a leg fracture, knee contusions or a kidney hematoma?

And since helmets are next to useless in automobile collisions, without knowing what caused the accident that lead to the one intracranial bleed, who's to say if a helmet would've even been useful.
https://www.forbes.com/sites/carltonreid/2019/06/03/volvos-world-first-b...

With Michigan infrastructure being so infamously terrible there's a reason I've been riding a front suspension mountain bike as my daily commuter for the past three decades.

When you try to ride those tiny little scooter wheels over broken, uneven pavement you're gonna end up with some pulled shoulders and scraped knees, helmeted or not.

It would be interesting to see what role, if any, alcohol has played in these incidences.

Definitely more concerned about those two-ton metal cages driving around and a lack of infrastructure for alternative modes of transportation.

And what about the scourge of automotive related deaths? Or is it just that Motorists killing people won't get clicks?