Michiganders can expect a hot summer with plenty of opportunities to fish the Great Lakes, camp on the shores and build sand castles on bigger beaches.

With Memorial Day kicking off the unofficial start of summer, Bridge Michigan spoke with water quality experts, researchers and scoured forecasts to get a sense of what to expect from the Great Lakes this year.

It’s looking sweet: Water levels are receding, summer is expected to be hotter than normal (especially in July and August), fisheries are strong, invasive species are mostly in check and algae blooms are expected to remain relatively low.

From Caseville to DeTour and Manistique and South Haven, hydrologists say to expect more beach space to lay out towels, as water levels will be significantly lower than record highs of the past few years.

While water levels can fluctuate based on location, Lake Superior is near its 100-year average and lakes Huron, Michigan and Erie are still above that average but lower than the past two years, according to the U.S. Army Corps of Engineers.

“The lakes go through a seasonal pattern where they start rising in the spring and reach their peaks in the summer,” said Keith Kompoltowicz, the corps’ hydrology chief for the Great Lakes watershed.

Lakes Huron and Erie are expected to peak in June, followed by Lake Michigan in July and Lake Superior in August.

Beyond water levels, here’s a look at other factors that could shape Michigan’s summer:

Lower waters give campers more space in parks near the state’s coast, according to Ron Olson, the Department of Natural Resources’ chief of parks and recreation.

In the past couple of years, Olson said high waters forced the state to close some campgrounds in Tawas State Park and Harrisville State Park on the shore of Lake Huron.

“We had some waterfront sites that were closed because the water was so high it flooded the campsites,” Olson said. “Tawas State Park was closed for most of the season last year because water was high and if you had a camper vehicle, it would be easy to get stuck.”

Campsites near the Great Lakes are the most popular, according to Olson, who noted that site reservations across the state have increased since the pandemic started in 2020.

Olson said 94 percent of the state’s more than 1,000 campsites were occupied this past Memorial Day weekend.

Campsites in Grand Haven, Ludington and Van Buren generally book out the fastest, Olson said. He advises campers to book sites at least six months in advance of a holiday weekend.

Anglers will have plenty of opportunities this year, according to fisheries coordinators with the DNR. On Lake Michigan, there are plenty of coho and chinook salmon, said Jay Wesley, the lake’s basin coordinator.

“(The fisheries) had some really good survival of younger (fish) so both wild and hatchery fish should be available to anglers,” Wesley said.

Salmon are doing well because their prey, alewives, are back in large numbers, but yellow perch numbers are still down.

“There are some forks (of the lake) that do OK, though,” Wesley said.

On Lake Erie, anglers can expect a “really good fishery this year” with lots of walleye, said Jim Francis, the lake’s basin coordinator. Typically, anglers can catch walleye between June and July and come fall, the yellow perch fishery picks up.

Francis said high water levels from previous years are one of the reasons walleye are thriving.

“There is certainly a correlation there, but there are other factors as well,” Francis said, noting that Lake Erie only has natural reproduction fisheries and does not stock fish. The DNR stocks more than 20 million fish in lakes Huron, Michigan, Superior and more than 1,000 smaller locations.

Salmon, trout and walleye will be bountiful in Lake Huron as well, according to Randy Claramunt, the lake’s basin coordinator.

“In the spring, the weather was a little tough but starting in the south, we had probably our best coho spring that we have had since reintroducing it in 2019,” Claramunt said.

In the Upper Peninsula, the fishing season on Lake Superior is expected to be average, according to the lake’s basin coordinator Patrick Hanchin. But a late winter could make it a good season for brown trout, splake and salmon.

“The spring conditions will persist a little longer and you’ll get some better opportunities for those near-shore fish,” Hanchin said. “Lake trout fishing will be great. That’s the bread and butter for Lake Superior. So anglers can expect that to stay the same.”

The state urges anglers to wash, drain and dry their boats to prevent the spread of invasive species like zebra mussels and algae.

Boaters should be especially aware of didymo algae, a dense algal bloom that can cover up to 100 percent of stream bottoms, said Joanne Foreman, invasive species communication coordinator for the DNR.

The wooly-textured algae that thrives in clean waters was first detected in the Lower Peninsula’s Upper Manistee River in December. Foreman said, until last year, the invasive species was contained in the St. Mary’s River, which drains into Lake Superior near Sault Ste. Marie.

“We’re concerned now that it’s in one of our major trout streams because there is so much traffic there and people visit trout streams or kayak in them as well,” Foreman said.

People should clean their kayaks or boats off with hot water or a cleaning solution to kill the algae, Foreman said. Then, it’s important to drain the vessel and let it dry for at least five days before transferring it to another body of water.

“It’s so important to not just bundle them up in your car and leave them there over the weekend because if they stay moist, the algae could still survive,” Foreman said.

Algae blooms, a rapid increase of bright-green algae in freshwater or marine systems, have plagued the Great Lake in recent years because of severe rainstorms lasting several days.

Intense algae blooms were particularly harmful in the western basin in Lake Erie in August 2014, which caused a water crisis in Toledo. Last year, harmful blooms covered the eastern shores of Muskegon and White Lakes in Muskegon County.

“There's a little bit of uncertainty about exactly what rain events we're gonna get into the end of July just because it's a long time period,” Johnson said.

Rain spurs algae blooms because it transports runoff phosphorus from farms into rivers and lakes. With drier conditions, Johnson said it is less likely the phosphorus will find its way into the state’s waterways.

So far, a lack of big storms could mean drier conditions and less severe algae blooms, she said. 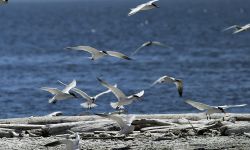