As Canada leans on an international treaty to keep oil flowing through Line 5, Michigan Native American tribal leaders want the Biden administration to acknowledge that the pipeline’s fate affects their treaty rights, too.

In a press conference Tuesday, Bay Mills Indian Community President Whitney Gravelle called upon the Biden administration to make “a serious commitment” to uphold the rights of Michigan tribes as the federal government faces increasingly complex diplomatic issues regarding Line 5.

Gravelle’s comments come a week after Canada invoked a 1977 treaty governing cross-border pipelines in an attempt to block Gov. Gretchen Whitmer’s efforts to shut down Line 5, which runs beneath the Straits of Mackinac. Canada argues that the treaty, part of which says that “no public authority” in either the U.S. or Canada can impede the flow of petroleum products through international pipelines, leaves Whitmer powerless to shut down Line 5.

Lawyers for the state of Michigan dispute that interpretation, and a University of Michigan legal expert earlier told Bridge Michigan that other language in the 1977 treaty gives Michigan the power to regulate the pipeline.

Calling efforts to keep Line 5 open a “direct attack on our sovereignty,” Gravelle argued at a virtual press conference Tuesday that “tribal nations’ treaty rights in this area predate and supersede any of Enbridge’s interests, including any rights the government of Canada or Enbridge may claim.”

The Straits and much of Michigan’s landmass are protected by the 1836 Treaty of Washington, in which tribes ceded millions of acres to the U.S. government in exchange for permanent rights to hunt, fish and gather, among other rights. Michigan tribes have argued an oil spill from Line 5 could decimate fish populations, rendering their protected fishing rights meaningless.

Enbridge is suing the state in hopes of keeping the pipeline open in response to Whitmer’s shutdown order. In a statement Tuesday, Enbridge spokesman Ryan Duffy said that Enbridge supports the tribes’ treaty rights, but declined to elaborate on whether those rights are germane to the Line 5 dispute.

Gravelle’s comments come as anti-Line 5 activists launch a pressure campaign on the Biden administration aiming to counteract Canada’s diplomatic pressure. On Tuesday morning, the anti-pipeline coalition Oil & Water Don’t Mix delivered tens of thousands of petitions to U.S. Sen. Gary Peters’ office, with the request that the Democratic senator pass them to Biden.

Legal disputes over Line 5’s fate have been ongoing for years, but have grown more intense since Enbridge in May defied Whitmer’s orders to shut down the pipeline. Whitmer, who campaigned for office on a promise to shutter Line 5, argued the risk of an oil spill from the aging Line 5 is too great to tolerate.

Attorney General Dana Nessel backed up that order with a lawsuit, prompting Enbridge to countersue. The two sides are now awaiting a decision from U.S. District Court Judge Janet Neff about where the case should be heard. Michigan wants to proceed in state court, while Enbridge wants to keep it in federal court.

In a legal filing last week citing the 1977 treaty, a lawyer for Canada argued that Neff should pause the case until the two countries can negotiate the dispute. Nessel struck back, calling Canada’s treaty concerns “irrelevant.”

A spokesperson for the U.S. State Department said the agency is “aware” of Canada’s treaty invocation and “we expect that both the U.S. and Canada will engage constructively in those negotiations.”

The spokesperson did not respond to questions about the tribes’ treaty concerns.

Speaking during the Tuesday press conference, members of the coalition pointed to an Oct. 2 oil spill in California as evidence of the dangers posed by underwater pipelines like Line 5.

That spill, which released tens of thousands of gallons of oil off the coast of Huntington Beach, “should be instructive for all of us,” said Sean McBrearty, campaign coordinator for the anti-Line 5 coalition Oil & Water Don’t mix. “A spill from Line 5 could be orders of magnitude worse.”

Line 5 carries up to 540,000 barrels of petroleum products daily between Superior, Wisconsin and Sarnia, Ontario, with the pipelines passing through the Straits of Mackinac on their journey through Michigan. It has been repeatedly struck by ships’ anchors, including an incident last year that prompted a temporary pipeline shutdown after Enbridge discovered “significant damage” to one of the pipeline’s two underwater spans.

Enbridge maintains that Line 5 is safe, and that it has invested heavily in monitoring and safety initiatives designed to prevent a spill. 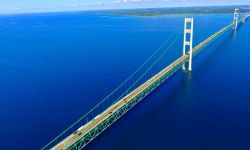