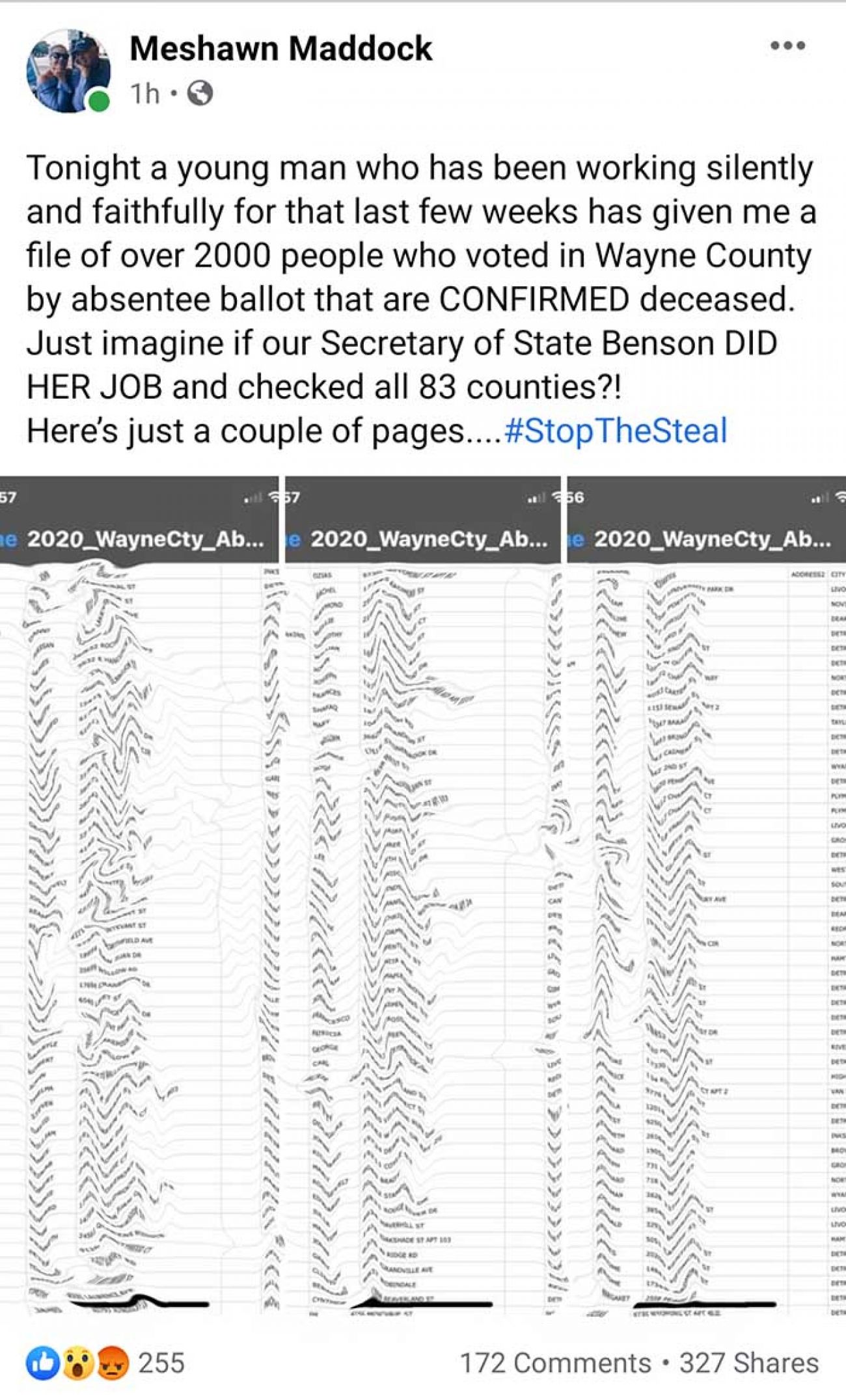 The list of 150 or so names was part of a larger file of more than 2,000 people who “voted in Wayne County by absentee ballot that are CONFIRMED deceased,” claimed Maddock, a prominent Republican who is seeking to become the party’s state vice chair.

But Maddock’s purported confirmation quickly crumbled, as commenters began pointing out glaring and obvious flaws, including addresses in communities like Walled Lake and Novi, which are in Oakland County not Wayne.

“I am certainly not dead!” wrote one woman, whose name and address appeared on the list despite online evidence she was alive, including holiday photos of her family she had recently posted.

“Two people in my neighborhood are on this list,” wrote another man. “They’re very much alive. Hell, their boys play baseball with my sons.”

Among the alleged dead was Bill Babcock, a Grosse Pointe Woods voter who said Tuesday he is “doing fine,” aside from the grueling year-end inventory he was performing in his job as a swimming pool salesman.

“I think it sucks,” he told Bridge Michigan on Tuesday, less than 24 hours after Maddock posted his name and home address in an attempt to prove voter fraud that state officials have not found.

“Can’t we just move on? There are bigger problems out there, like getting this vaccine thing situated,” Babcock said.

Babcock is the latest in a string of unassuming voters unwittingly drawn into a sustained and quixotic quest by supporters of President Donald Trump to undermine the Michigan election, which Democrat Joe Biden won by 154,188 votes.

The effort has reached the upper echelon of the Michigan Republican Party. Last week, the state GOP Chair Laura Cox sat beside Rudy Giuliani as the president’s attorney repeated unproven fraud claims and urged the Legislature to ignore the popular vote to appoint pro-Trump electors.

Maddock, who is teaming with former Chair Ron Weiser in a bid to take over the Michigan Republican Party from Cox, participated in a “stop the steal” rally at the state Capitol Wednesday, telling fellow activists she will not stop fighting the election results “until my president tells me to stop.”

But Babcock is not the kind of voter the GOP wants to exclude.

“I am a stout Republican,” he said, telling Bridge Michigan he voted last month for both Trump and U.S. Senate challenger John James, who lost to Democratic incumbent Gary Peters by 92,335 votes.

Like other debunked dead voter claims that have circulated since the Nov. 3 election, Babcock appears to be a victim of mistaken identity: His father and grandfather, both deceased, had the same first and last names as him but a different middle name, he told Bridge.

“It’s very weird,” he said. “This whole thing is getting crazy.”

By Tuesday, a day after her initial post, Maddock acknowledged that some of the voters on the list she posted are alive. She deleted the post after what she claimed was a “threat” by Facebook but continues to insist that many of the named voters are dead.

“This isn't about overturning the 2020 election,” Maddock told Bridge Michigan in a text message. “This is about never letting this happen again, and punishing those who have committed fraud.”

State and local election officials say election fraud is rare and there is no evidence of widespread fraud in the Nov. 3 contest. Michigan Attorney General Dana Nessel has urged Trump supporters to “put up or shut up” by reporting any alleged crimes to law enforcement instead of on social media.

Nessel’s office is currently prosecuting one case of alleged election fraud: a Canton Township dad accused of forging his daughter’s signature on an absentee ballot -- with her permission, which is nonetheless illegal.

Lists of allegedly dead voters have circulated on conservative social media channels for weeks, and they “are not accurate,” according to Michigan Secretary of State Jocelyn Benson’s office.

In some cases, clerical errors by local election officials have led to flaws in the state’s voter list that have triggered false claims, including placeholder birth dates or confusion between voters with similar names.  When old records were transferred into the state’s digital voter file, some clerks used a Jan. 1, 1900 placeholder date if they did not know birthdays, leading to claims of 120-year-old voters.

Michigan clerks this year rejected 3,469 absentee ballots from voters who submitted them early but died before Election Day. Nearly 700 of those voters lived in Wayne County, including 150 in Detroit.

Maddock declined to disclose the source of the list she posted, telling Bridge, “I had a supporter who has been working on this” and is “not ready to share that yet.” She now has an “army of volunteers” scouring the list and is preparing to release a “final” version soon, she said.

Similar posts about claims of dead voters, particularly in Wayne County, have proliferated on conservative news sites, and their claims have been quickly refuted.

Bridge Michigan, which has debunked a series of previous dead voter claims, did not vet every name on Maddock’s list but identified several other errors. We are not naming additional voters because they are not public figures and did nothing wrong by remaining alive.

Northville Township Trustee Christopher Roosen, a Republican, said he looked up two local names on Maddock’s list and quickly confirmed that both of the alleged dead are living.

One of the named voters is 102 years old and living at a local nursing home, Roosen said. The other runs the homeowners association in the neighborhood next to his and is active on social media.

“Unfortunately right now there are a lot of people both in Michigan and nationally who have decided you can’t be a Republican unless you believe that the election was stolen from the president, or that he really won, which just doesn’t seem to be a factual statement,” Roosen said.

Maddock and her husband, state Rep. Matt Maddock of Milford, are “hard-working folks, but I sure wish that they would stick to the facts,” he added.