Post-election, Detroit braces for legal challenges to its results

Tensions boiled over Wednesday afternoon as poll challengers completely disrupted the room where the city’s absentee ballot processing and counting is taking place.

After a calm Tuesday, Detroit’s election is now a hotbed for poll challengers. It appears that hundreds showed up at TCF Center but were denied entrance due to COVID-related restrictions.

Those challengers could delay Michigan voting results, and, should they gather sufficient evidence of fraud, even put Detroit votes at risk of being ruled invalid. On Wednesday afternoon, the Trump campaign said it would file a lawsuit to halt counting, but, state officials said no suit had yet been filed. One conservative challenge in Detroit faces criticism because she chairs the Wayne County board that has the power to certify the Detroit election.

Secretary of State Jocelyn Benson, at a late Wednesday morning news conference,  said Detroit election workers are “focused on getting it right so it can withstand court challenges.”

We spotted this trailer steps away from the TCF Center near Hart Plaza in Downtown Detroit. The man on the loud speaker spoke in support of President Trump and questioned the validity of the ballot tabulation process in Detroit and Wayne County. #ElectionDay313 #ElectionDay. pic.twitter.com/fc40zV2HiL

Amid the big convention hall filled with more than 1,000 poll workers and officials, the vast majority of them Black, conservative challengers often stand out. Most of them are white, and many aren’t Detroit residents.

During a news conference last week, members of the Detroit branch of the NAACP said this year’s election is “the most contentious election since the general election of 1876,” which prevented Black Americans the right to participate in U.S. democracy. 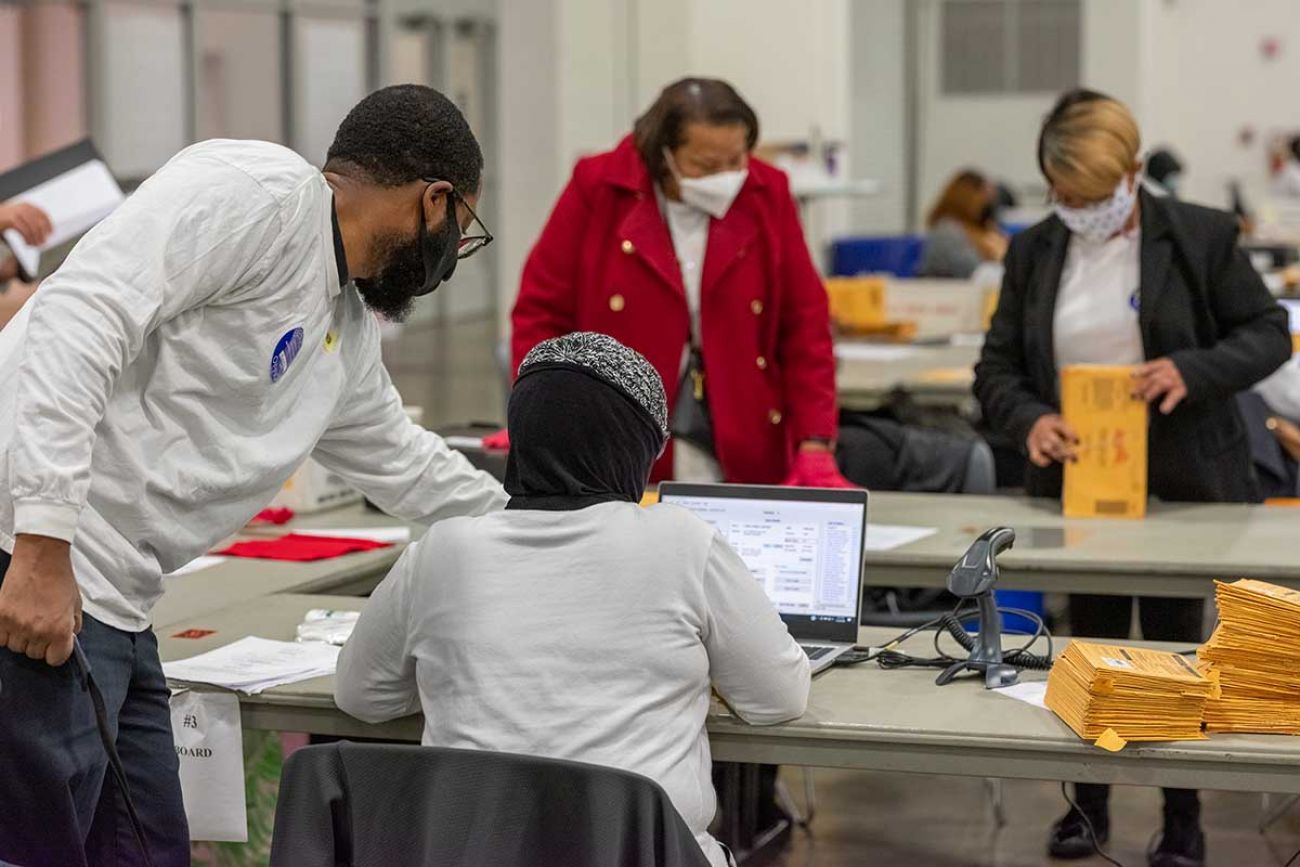 The 2020 presidential election has been chock full of racial strife. From a sitting president who refused to condemn white supremacy to federal and state organizations that have warned of voter suppression and intimidation, seeing white conservative challengers inspect the work of Black poll workers has troubled some.

At the TCF Center, tables of mostly middle-age to elderly Black workers sit and count the Detroit vote while mostly white volunteer poll challengers oversee their work. The visual is striking.

The Michigan Republican Party, the Michigan Democratic Party, the NAACP and the Election Integrity Fund, among other groups sent representatives to TCF to ensure an accurate tally.

Who is Monica Palmer?

The Wayne County Board of Canvassers is a bipartisan commission made up of two Republicans and two Democrats. The Board certifies county elections and is supposed to be a neutral stakeholder, according to one member.

The Wayne County Board of Canvassers can also call for a recount.

“Our job is to stay above the fray when it comes to conducting our ministerial duties as canvassers,” Jonathan Kinloch, vice chairman of the Wayne County Board of Canvassers, told BridgeDetroit. “I don’t know that the law prevents us from being challengers but it does create some potential questions from voters — it brings in unnecessary chatter that we don’t necessarily need at this time.”

Yet Monica Palmer, a Grosse Pointe Woods resident and chairwoman of the Wayne County Board of Canvassers, vows to monitor the days-long process at TCF Center.

In the August primary, Palmer was one of the board members who requested Benson examine the training of Detroit poll workers and the overall management of city elections. 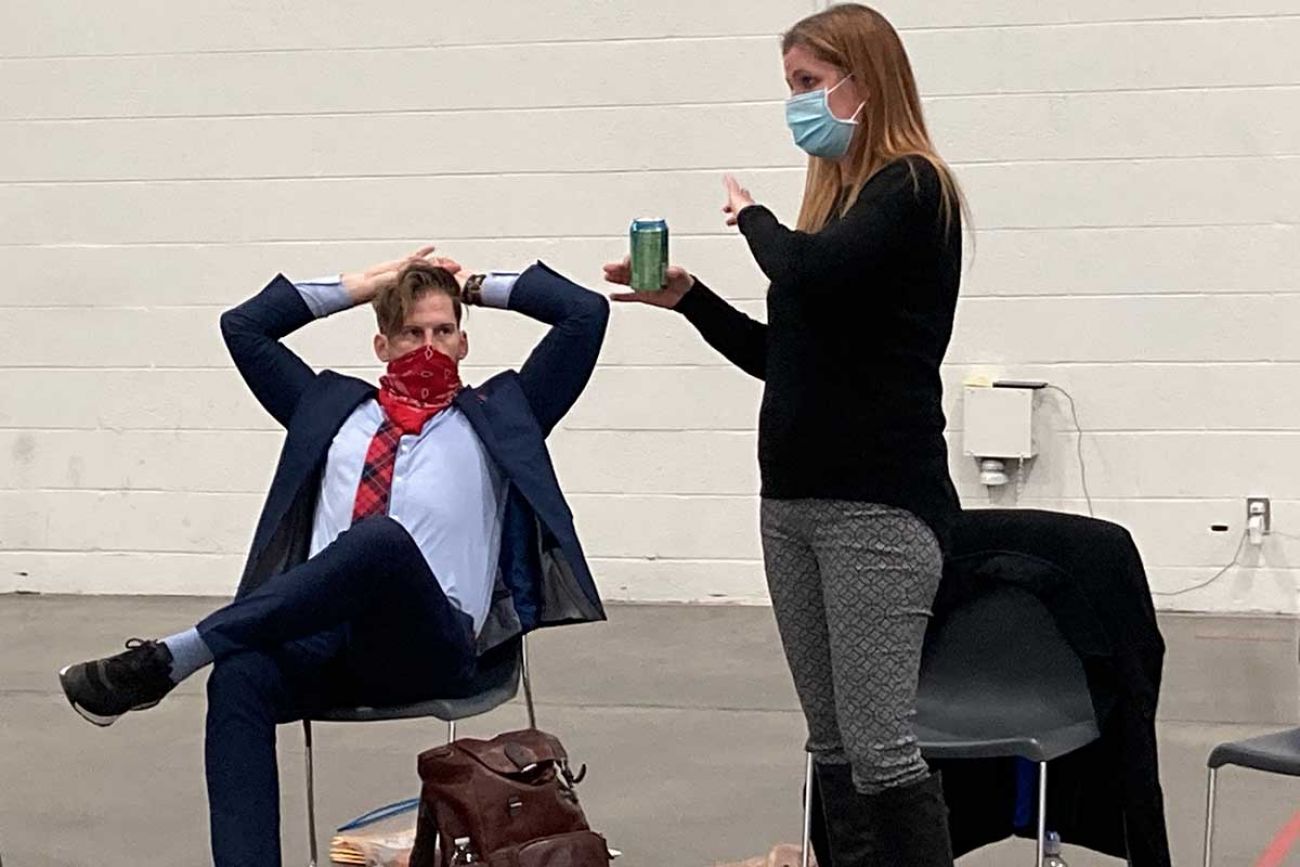 After the primary, the state stepped in as a partner to help run Detroit’s November election.

August was not the first time Detroit elections have faced criticism for poor management.

“Was it human error or intentional mistakes? I don’t know,” Palmer said in an earlier BridgeDetroit interview, regarding the August primary.

Around 5 a.m. Wednesday, Palmer said that while she had challenger credentials, she was at TCF Center as an observer to “avoid any conflict” with her appointed role as head of the canvassers board. She had been there since the processing of absentee ballots began Tuesday morning.

Political parties and accredited organizations are allowed to appoint poll challengers. The Detroit Department of Elections uses a list, pre-approved by the state, of challengers.

Palmer should not be at the TCF Center observing the absentee ballot process, said Kinloch.

“I believe that it is not appropriate for those who will be rendering decisions and certifications of an election and addressing any potential challenges in a recount to be engaged in the election process at the front end,” said Kinloch.

Separately, Palmer’s role in the campaign for the Grosse Pointe School Board of Education has stirred controversy. She’s the founder of a political action committee that has anonymous donors, an unusual move for a school board race. The PAC has paid for ads featuring a trio of school board candidates. The campaign has led to calls for Palmer’s resignation from the county board of canvassers. Running a PAC is a conflict of interest because the county board of canvassers also must certify the school board election, critics contend. Palmer has not resigned.

Palmer told BridgeDetroit she questioned several things she saw overnight at TCF Center, including the delivery of about 38,000 ballots that arrived at 3 a.m.

“Where were they before that?” she asked.

She and other observers at TCF questioned why there were not more Republican challengers in Detroit.

The politics of poll challenges

Tim Griffin, special counsel for the Thomas More Society, a conservative law firm in Chicago, flew in from Virginia to be a poll challenger with the Election Integrity Fund. However, since he wasn’t a registered voter in the county, he became a poll watcher.

Griffin, who slept at TCF Tuesday night, kept track of all the challenges his team observed.

Griffin said the Election Integrity Fund had about 30 poll challengers at the Central Counting Board and wanted to make sure the “integrity of the election is intact.”

Griffin and Gordon Pennington, also with the Election Integrity Fund, shared some of the challenges the group had, including not having enough Republicans at the central counting board. 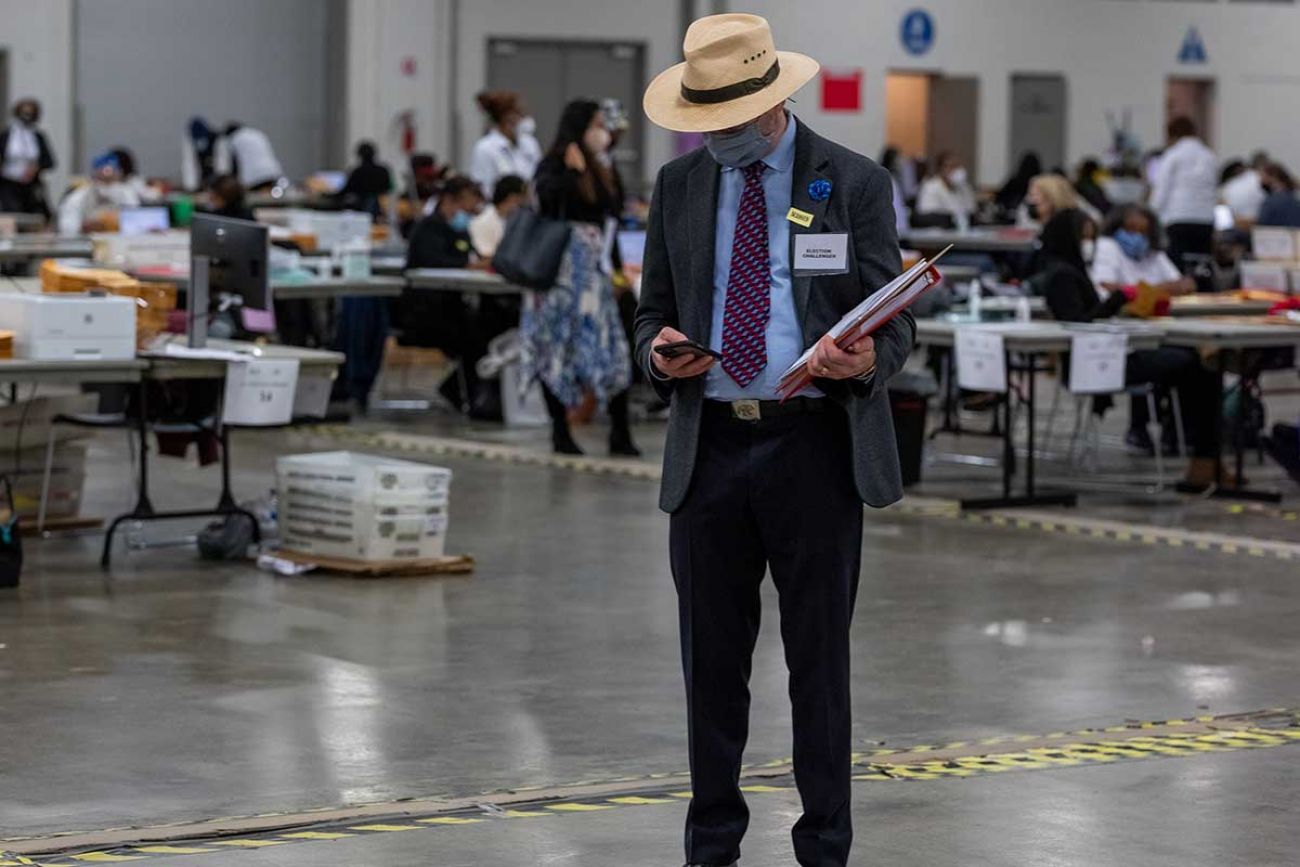 “One concern is the adjudication tables … there’s supposed to be an equal number of Republicans and Democrats,” Griffin said. “We cannot verify whether there are Republicans.”

“Poll workers can be recruited from anywhere in the state and are not limited to Detroit residents. Clerks are supposed to do their best on this front,” Ann Kiersnowsksi, press secretary for the Secretary of State said on Tuesday. 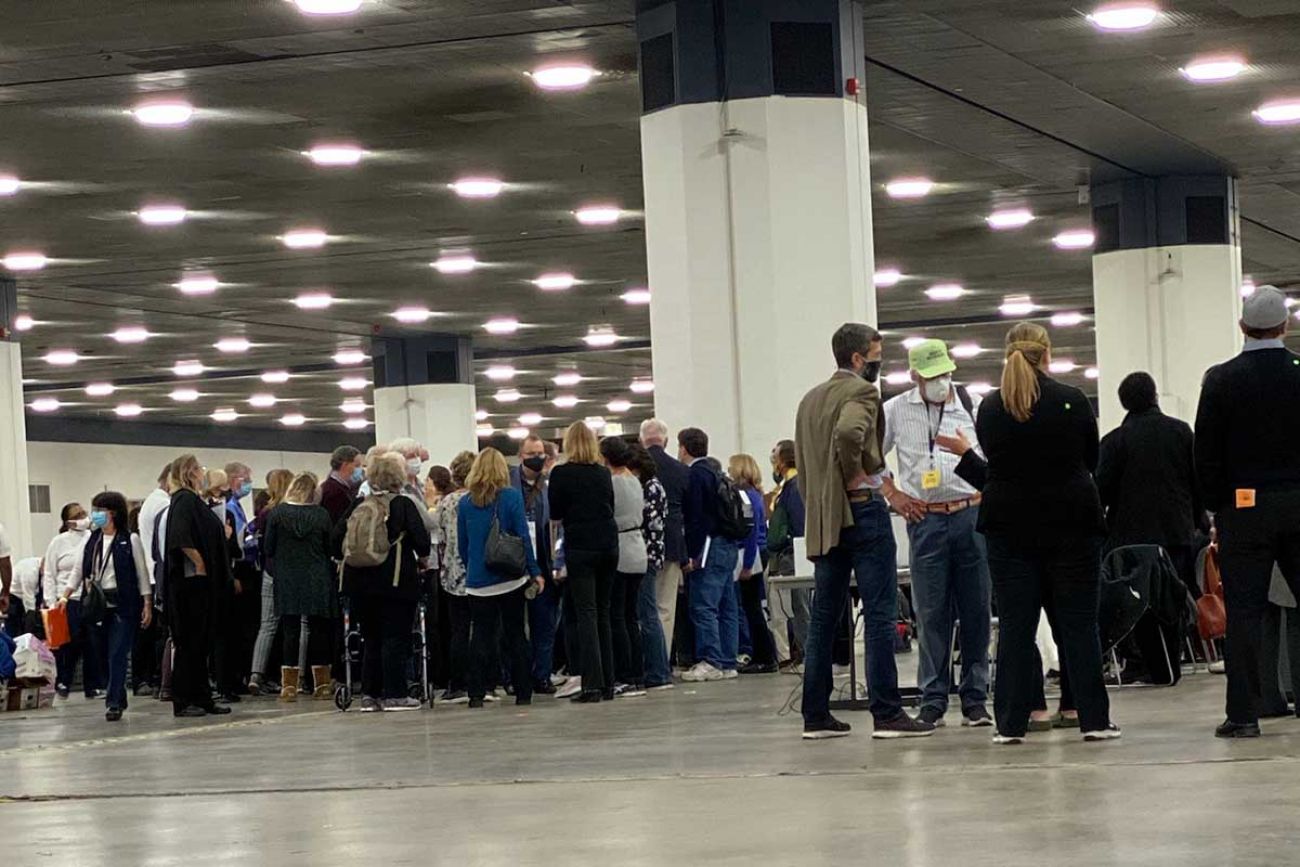 A pair of Michigan Republican Party officials want to persuade the Legislature to order an audit into the 2020 state election, despite 250 local audits that have already found nothing amiss. (Bridge file photo)

Lawyers ready to step in on challenges

Around 11 p.m. Tuesday new poll workers were sworn in and shortly after a wave of Democrat challengers entered the TCF Center. Poll workers estimated about 135 Democrats showed up.

The challenger process remained largely civil into the early morning hours with some challengers taking breaks to rest or sleep. By 3 a.m. some had left the building.

The ACLU said it stands ready to support the Detroit elections process.

Ann Mullen, communications director for the ACLU of Michigan, said it routinely sends lawyers to polling locations and volunteers to monitor the polls.

“That is our pledge to continue to uphold democracy,” she told BridgeDetroit on Wednesday. “We’re just ensuring we have our presence there and doing what needs to be done to ensure every vote is counted.” 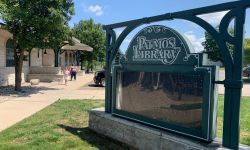