Will Michigan Republicans take down Justice Clement? If so, here’s how.

Michigan Government
Will Michigan Republicans take down Justice Clement? If so, here’s how.

Michigan Supreme Court Justice Elizabeth Clement’s political fate may hang in the balance this weekend, when Republican grassroots leaders from around the state gather to decide who will receive party endorsements — and coveted campaign resources — for the state’s high court.

There’s been talk of ditching Clement’s endorsement after she sided with Democratic justices in two high-stakes decisions. Bridge has learned there has even been outreach to an attorney and the wife of a veteran tea party activist to replace Clement as a Republican-endorsed candidate.

Appointed to the high court by Republican Gov. Rick Snyder last November, Clement’s nomination is no slam dunk: Many Republican activists are livid about two votes she has made during her short time on the bench.

One ruling allowed schools to bar carrying guns on school property; another allowed a citizen proposal that would put the legislative redistricting system in the hands of an independent commission to appear on the November ballot. Both decisions were largely hailed by Democratic groups and condemned by Republicans and the outside organizations that financially back them. 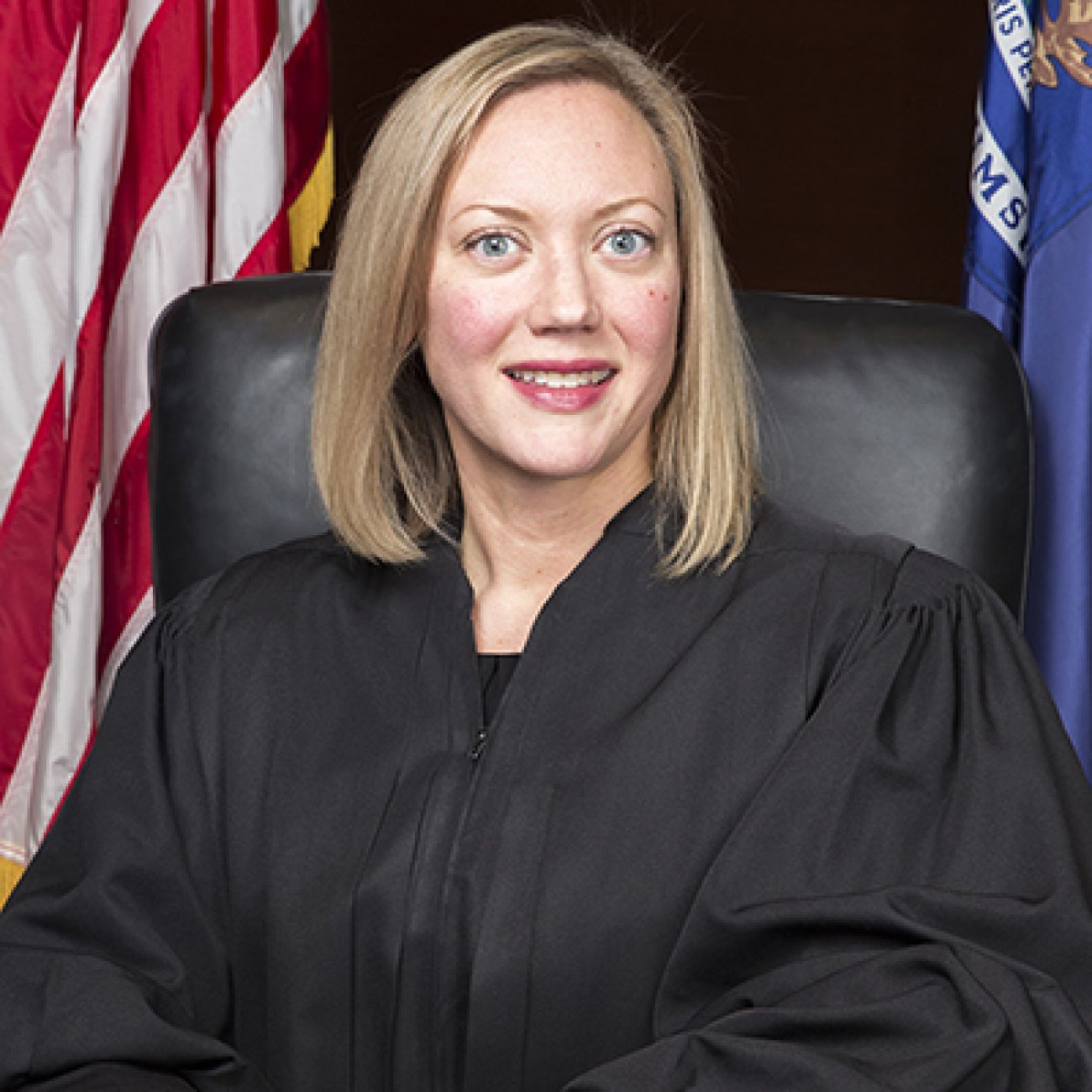 In interviews, 11 GOP activists, county party chairs, convention delegates, political consultants and commentators told Bridge in the days leading up to Saturday’s convention that frustrations are still simmering. But they said no organized challenge to Clement’s once-assured endorsement has yet emerged and unseating her seems unlikely. Yet that doesn’t mean an 11th-hour effort couldn’t happen, some of them say.

If delegates decide to put up an alternative Supreme Court nominee, they would have to suspend the rules of the convention to allow a last-minute candidate to be considered. Rules suspension requires a two-thirds majority vote. One county party chair said doing so would be a “nuclear option,” raising the question: Is frustration with Clement broad enough to muster the votes to do it?

Party insiders say dissatisfaction is palpable, but they haven’t yet seen evidence the chatter has developed into a full-blown insurgency.

“If you’re going to (attempt to unseat Clement) you need to be organized, even if it’s a shadowy movement,” said Eric St. Onge, a long-time party leader and currently a member of the party policy and rules committee, which sets the rules for the convention. “People who are strong party members would have some idea of what’s going on, and I’m just not hearing anything.”

Even if she doesn’t secure the party’s nomination, Clement will be on the ballot in November. Incumbent justices can nominate themselves for the ballot by filing an affidavit with the state; both Clement and Kurtis Wilder, the other Republican justice up for re-election this year, did so in June, according to Michigan Secretary of State records.

According to one report, Wilder stopped campaigning with Clement after she broke with three fellow Republican justices in the redistricting decision.

Wilder’s campaign sent Bridge a statement late Thursday, via Lansing-based political consulting firm Sterling Corp., that didn’t directly address Clement’s redistricting vote, but said: “Justice Clement and I are both independent candidates, and like other independent candidates, we will be running independent separate campaigns focusing on victory in November. We will be together on many occasions, but also will focus efforts separately where it makes sense for our campaigns.”

Sterling Corp. ended its fundraising work for Clement on Aug. 9, Denise DeCook, a senior director at the firm, told Bridge via email Thursday. She did not elaborate on the reason.

As an incumbent, Clement’s name will appear on the ballot regardless of whether Republicans nominate her, and she will benefit from an incumbency designation next to her name. Although Supreme Court justices are nominated by the major political parties, a candidate’s party affiliation does not appear on the ballot.

But the lack of party endorsement would be a gut punch for her campaign. If the Republican Party doesn’t endorse her, she would lose out on precious campaign resources, said longtime Lansing political commentator Bill Ballenger.

“That would send a signal,” Ballenger said. “It would hurt her, and it would enable the Republicans to say, ‘Whatever money we raise goes to Wilder,’ (and) … let Clement fend for herself.”

The risk with that strategy, he said, is that if Clement isn’t among the top two vote-getters in November, a Democratic-nominated justice is likely to take her place.

Michigan Democrats, meanwhile, are expected this weekend to nominate their Supreme Court candidates, Megan Cavanagh and Samuel Bagenstos, to challenge Wilder and Clement. Both earned their party’s endorsement in April. Democrats hope that distaste for Republican President Donald Trump and eight years of GOP control in Lansing will motivate their voters to turn out in November and lead to electoral wins.

Control of Michigan Supreme Court is very much at stake. Republican-backed justices currently have a 5-2 edge over Democrats on the high court. If the GOP lost Clement’s and Wilder’s seats, the court would flip 4-3 to Democrats.

Still, Ballenger said, it’s very difficult to knock off an incumbent. A party failing to nominate its incumbent has happened just once since the current state constitution was adopted in 1963, he said, and the gambit backfired. Incumbent Justice Thomas Giles Kavanagh won re-election in 1976 despite losing the Democratic Party’s endorsement to former Detroit Mayor Roman Gribbs.

“The parties kind of decided at that point it was a little bit futile to deny somebody a nomination at convention,” Ballenger said.

Clement, contacted through her campaign, did not respond to a message seeking comment. Before joining the bench, she served as Snyder’s chief legal counsel. Before that, she worked in the Michigan Senate and also owned a law firm, where she focused on family law.

Her newcomer status on the court already could make it difficult for Clement at this year’s convention, regardless of the nomination vote, Ballenger said. This will be her first election to keep her seat, so she does not have the statewide name recognition other justices enjoy.

Clement’s decisions on guns and redistricting “have angered a lot of people,” said Dan Wholihan, chairman of the Livingston County Republican Party, who told Bridge he was sharing his own views and not necessarily those of the county party.

On the firearms issue, Wholihan said, Clement “didn’t follow the preemption law, which is pretty cut and dry. (It says) local units of government can not have stricter gun controls than the state, and that was flat-out disregarded.”

He said his personal preference would be to nominate only Wilder and not Clement. He said he has had conversations with other delegates about voting for just one justice, instead of two. Still, Wholihan added: “I don’t know if that would happen at convention or not.”

Republican Party convention delegates tend to be more conservative than the average GOP voter. The process of choosing delegates begins at the precinct, or neighborhood level, and tends to activate core party supporters.

Multiple GOP convention delegates said Donna Nakagiri, an attorney and wife of a tea party activist who previously challenged a presumptive nominee for lieutenant governor — Brian Calley in 2014 — is the main name being floated as a possible challenger.

Nakagiri, of Hartland Township, confirmed by text message Wednesday that she was asked to run against Clement, but decided against it.

“Many people, not all grassroots, urged me to run as a candidate for Justice of the Michigan Supreme Court at the GOP convention this weekend,” she wrote. “After long and prayerful consideration I have declined to pursue this.”

In determining not to challenge Clement, Nakagiri said “a hallmark of prudence is being judicious in temperament and respectful of rules already in place.”

“I had concerns about the possibility that a floor fight might fracture the party at a time when the GOP needs to be unified and focused through the election in November,” she said via text message.

Several people Bridge interviewed said they don’t think a challenge is likely, noting the lack of a coordinated campaign around an alternative candidate with just days to go until the convention.

“It would be pretty out of the blue if someone challenged (Clement) at this point in time,” said Mary Nordbeck, chair of the Shiawassee County Republican Party.

Brian Began, a Republican political consultant who works as elections and research director for Lansing-based firm Grassroots Midwest, agreed, saying, “I don’t see them as being well-organized enough to pull that off.”

But if it does happen, “then it’s going to be a circus, which, frankly, I hope doesn’t happen because it can tear a party apart,” said St. Onge, the rules committee member.

Party insiders told Bridge that a desire to insulate other key races from an insurgent challenge is one reason why they were uncertain whether an attempt would be made to suspend the rules to challenge Clement.

Sarah Anderson, spokeswoman for the Michigan Republican Party, said she does not anticipate such a move.

“The system, more than ever before, is stacked against insurgent challengers who want to do something different than what the rules are set up to allow them to do,” Ballenger said. “Getting a two-thirds majority to suspend the rules? That’s a tough haul.”