A new Democratic governor, secretary of state and attorney general, and slimmer Republican majorities in the state legislature.

As Democrats gain a foothold on power in Lansing for the first time in eight years, Bridge asked pollsters, analysts, consultants and other experts about what Tuesday night’s results suggest about the issues that mattered, the electorate at large and what to expect in 2019.

Will the governor and legislature play well together?

Whitmer says her role in Senate leadership in the minority party forced her to compromise if Democrats were to make progress on any of their priorities, and that bipartisan work will carry over to her administration.

She told reporters Wednesday that bipartisanship is a “skill I’ve honed over the years” and that roads, schools and water are areas of common ground that unite Democrats and Republicans.

She said she is planning to meet legislative leaders next week to discuss possible road funding. (That could include taxes.) She met with Gov. Rick Snyder on Wednesday, and Whitmer said she plans to have regular meetings with leaders of both political parties. 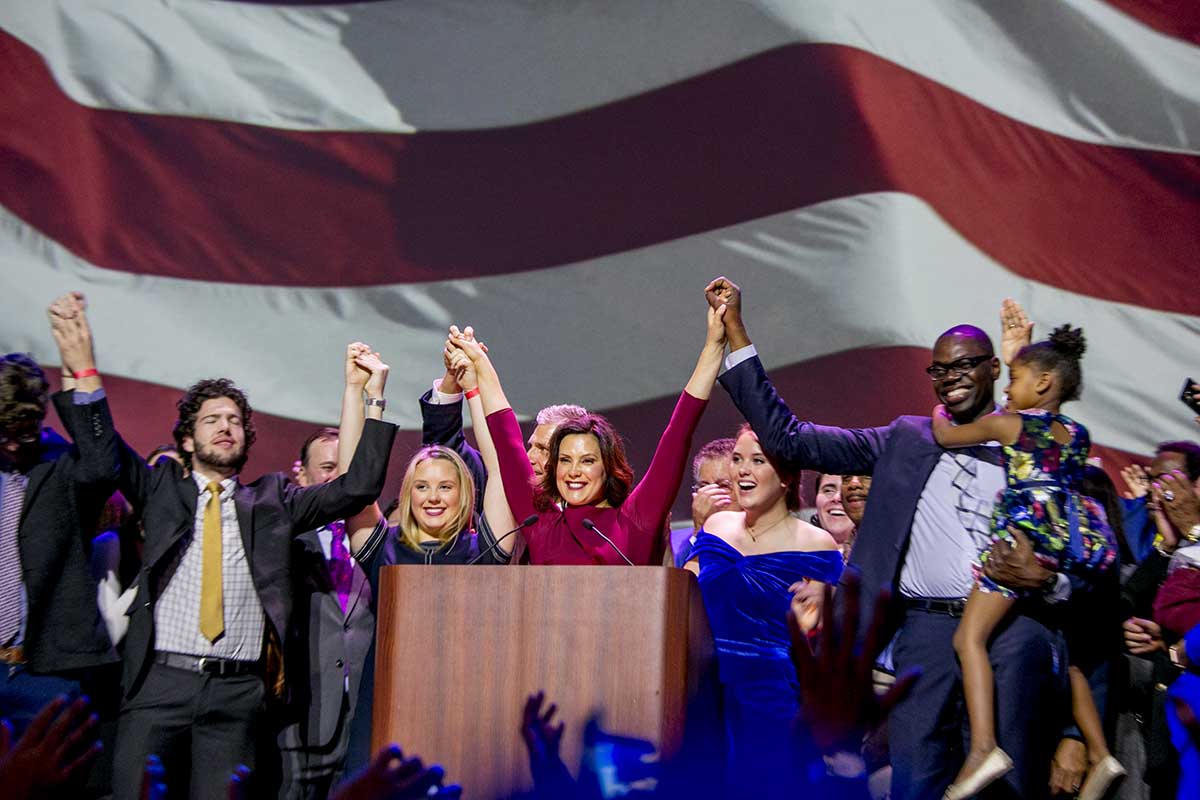 Divided government presents both opportunities and challenges, said Sandy Baruah, president and CEO of the Detroit Regional Chamber. His group’s political action committee endorsed Whitmer for governor in part because it said she was best-suited to find bipartisan solutions.

It’ll be in both Democrats’ and Republicans’ interests to craft compromises on big-ticket items such as improving infrastructure and education, Baruah said.

“Everyone’s already looking at 2020, and if the Republicans just obstruct between now and 2020, I think that’s going to put them in (a) pretty bad position for the 2020 election,” he said. “I think they’re going to want to show some accomplishments.”

State Rep. Tom Barrett, R-Potterville and the winner of a Senate seat previously held by Republican Rick Jones, suggested Michigan lawmakers can get things done even under split leadership.

“Even with Republicans in both chambers and a Republican governor, we still compromise on everything,” he said Tuesday night.

Did a blue wave wash over Michigan as Democrats hoped? Yes, even as Republicans retained control of both chambers, said Arnold Weinfeld, associate director of the Institute for Public Policy and Social Research at Michigan State University.

“Republican-held seats did flip,” he said. “It wasn’t a tsunami, but I think it was a wave both here in Michigan and across the country.”

The House will go from a 63-47 Republican majority to 58-52; Democrats lost a seat in the Upper Peninsula to Republicans for a net gain of five. 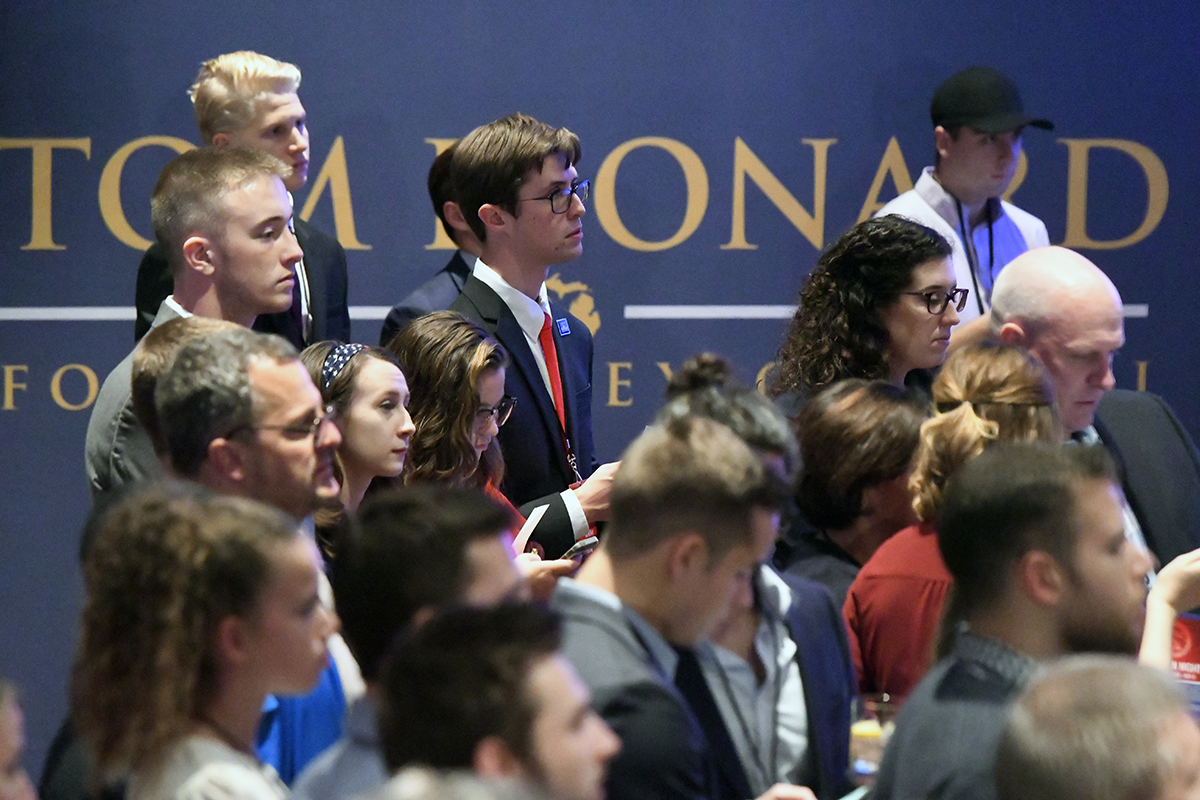 It was mostly forgettable night for Michigan Republicans on Tuesday, though they might be cheered by the fact that they managed to retain majorities in the state house and senate. (Bridge photo by Rodney Sanford)

Democrats also closed the GOP’s 27-11 supermajority in the Senate, shrinking the gap to 22-16.

Senate Democrats said earlier Tuesday that the party has not seen a net gain of more than a single seat in the upper chamber since 1974, when the pickup also was five.

Weinfeld said he was not surprised Democrats fell short of a majority in the House, and few experts predicted the party would take the Senate. Republicans’ heavy hand in drawing district boundaries (Michigan is seen as one of the most politically gerrymandered states) was too much to overcome, he said.

“At the end of the day, those maps tend to favor Republican candidates,” he said.

Some Republicans sought to explain Michigan’s shift to a more purple hue as almost an inevitability after a long stint of one-party control.

“It’s the second year of the presidency, as you know, and we tend to vote against the president’s party,” Ron Weiser, Michigan Republican Party chairman, told a subdued gathering of his party mates in Lansing just before Bill Schuette's concession speech. “As you also know, every eight years we change parties in Michigan.”

“It was a tough year, a tough political environment,” he told reporters following his loss Tuesday. “Look across the country. There are a lot of bumps out there, right? Some close races, some races that didn't go the Republican way, midterm elections — all those things come into play.”

Said Tom Shields, a Republican political consultant and president of Lansing-based Marketing Resource Group Inc. said Whitmer “didn’t do anything to upset the wave and stop it from coming. And Bill Schuette just couldn’t find any issue out there that really caught on.”

Dems tend to do well in urban areas but the real story Tuesday may have been Democratic gains in the suburbs, said Weinfeld, the MSU expert.

“I don’t think we can discount the impact of suburban voters,” he said.

Michigan’s urban-rural divide “may be more stark now that population is moving more into urban and metropolitan areas, but that means that the suburbs begin to play a much bigger role, and I think we saw that in Michigan and across the country,” he said.

That women swept the top of the ticket — from statewide offices, to the U.S. Senate — is “a historical occurrence,” said Weinfeld, of MSU.

And it’s part of a larger national trend. Women were motivated to turn out after Trump’s election in 2016 because they felt that issues they cared about were under threat in Washington, said Andrea Dew Steele, founder and president of Emerge America, a group that works to recruit and train Democratic women to run for office.

One of Emerge’s goals is to build a pipeline of female candidates at the local and state levels that could feed into federal races.

“The single reason we don’t have more women in office is traditionally because not enough women want to run,” Dew Steele said. “They don't see politics as the arena in which they want to serve their community, and this did flip for us certainly after that election.

“This is not a wave that’s going to crash and die out.”

Mallory McMorrow, a first-time Democratic candidate from Royal Oak who flipped a GOP state Senate seat, said she was motivated to run for office after seeing a viral video of students at Royal Oak Middle School chanting “build the wall” after the 2016 election, mirroring the language at Trump campaign rallies.

“It broke something in me,” McMorrow told reporters Wednesday, on a conference call hosted by Emerge America. "I really realized that we have to start locally and build back up, because we cannot wait for the rhetoric to come from the top down."

As a candidate, she said, “we weren’t trying to fit into a specific mold. And I think all of us were not running on our gender. We were running on our incredibly different backgrounds and experiences."

Those backgrounds created a sense of authenticity voters responded to, said Maeve Coyle, a spokeswoman for EMILY’s List in Washington, D.C., a group that works to elect Democratic women to office.

Whitmer, Coyle said, she didn’t shy away from sexism in the campaign while sticking to messages about key issues.

“We still live in a world where women face that,” Coyle said, “and she hit the right tone in responding to all of that while staying true to herself.”

The polls were (generally) right

After failing to correctly predict the outcome in 2016, polls have gotten their share of skeptics.

They were more on target this year. 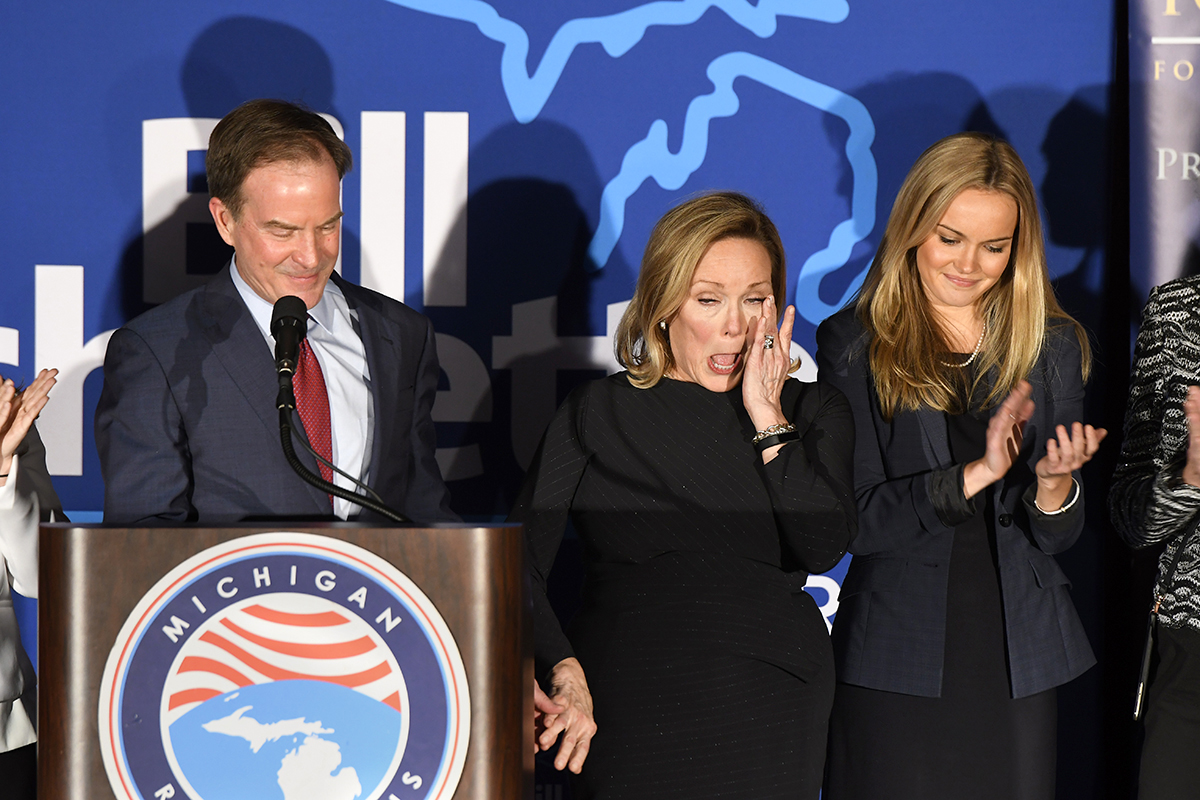 And his October survey came within a few points of the results for the three statewide ballot proposals, all of which passed.

A few observations of my own about the recent election:

The Republicans could have hardly found a more unattractive candidate for governor, his personality, attitude and overall body language made him an unlikeable person.

Those "dangerous Dana Nessel" ads were really over the top and might have actually helped her by creating a backlash.

John James did better than I expected since he seemed to start his campaign late with no tv commercials in my area until two weeks before the election. Give credit to Stabenow for not going negative on John James like she could have with his support of Trump.

A state legislative race in the Lansing area was won by a Democrat named Witwer, I wonder if the similar sounding name to Whitmer helped her by people being a bit confused with the long ballot and forgetting where they were at and thought they were voting for Whitmer. Just a guess anyway.

Democrats sold voters a bit of goods that will have to raise taxes to pay for it. Mi GOP badly needs to get rid of the good old boys who have been running the party for decades if they wan't votes.

Republicans have sold voters a bill of goods for two decades! They've sucked up DeVos money and granted the DeVos families the power they paid for. Republican-controlled state government has refused to find ways to pay for infrastructure in need of greater funding for at least that long. "You get what you pay for" comes to mind. Dems won't look to increase taxes willy-nilly, because they want to stay in office. But some things are worth paying for: PUBLIC education, infrastructure including roads and water systems. These things contribute to long-term prosperity for the state, not merely short-term political power. How much are bad roads costing us? How much is a poorly educated populace costing us? Has the state GOP become as destructively criminal and corrupt as they are on the federal level? I don't think so, yet, but maybe Trumpism will continue to trickle down. People saw Schuette's attachment to Trump during the primaries and showed what they thought of it at the polls in November. If I were still a conservative and still a Republican, I'd be trying to fix my party--or looking to start a new one that isn't filthy with what the GOP has become especially as the party of Trump. I was a Jerry Ford Republican. This party is not that party. The GOP has to fix a lot more than a few good ol' boys if they want to win political races. Try finding their integrity again, as step one!

Great job on this piece, Joel and Mike. Unfortunately, most Michigan voters, I believe, still know nothing about what the GOP did to tilt elections in their favor. I expect they will try to pack the "independent" spots on the new committee.

The GOP may well try to pack the commission, but the commission's decisions won't be strictly on majority vote. Maps have to meet criteria and have consensus among the different constituencies of the commission. Plus, public hearings will give voters opportunities to view and comment before maps are finalized. Also, the random selection process of commissioners should help prevent those kinds of efforts. We'll have to watch what happens and voice our complaints if we see bad behavior. In states I know of doing this sort of commission, the commissioners take their responsibilities seriously. And, yes, we independents usually have a bent one way or the other. But, like jurors, we can judge the merits.

That's interesting considering it is government employees (in government employee unions and 90% democrat) who will be judging whether or not all applications qualify for the position and then those same democrats deciding which "self proclaimed independents" are independent, and then those same democrats training the 13 decision makers on map making and which consultants are available, it would seem to me that it is FAR more likely that the independents will be packed with Democrat leaning commissioners.