MT. PLEASANT — It’s just after 11 p.m. on a recent Tuesday and, even for students under 21, the weekend party starts early.

“Today is my weekend, man,” one student declares.

It’s “pint night” at a local bar popular with students at Central Michigan University. That includes underage students where the only barrier between them and discount beers is the “X” scrawled on their hands by the bouncer.

But that’s not a real problem. In the bathroom, few actually use the urinal; the line is at the sink, where underage students simply wash the X from their hands and head to the bar to drink.

Across Michigan on game day, or just about any night during the week, alcohol is readily available to most any students who seek it (though, to be sure, many of the businesses that serve alcohol are vigilant in making sure students are of age).

Bars, party stores, cab drivers, fake ID marketers and other entrepreneurs have formed an interwoven bazaar catering to student drinking, tapping into a market as predictable as the sunrise and as profitable as oil.

The ubiquity of alcohol-related businesses – hundreds of establishments encircle campuses across the state – make any attempt to rein in problem drinking a question of responsibility and safety but also of commerce and tax revenue.

Dozens of bars and stores that sell liquor, beer and wine can be found within short walking distances of many Michigan campuses. The maps below show the locations of liquor license holders near the University of Michigan, Michigan State, Central Michigan and Northern Michigan. 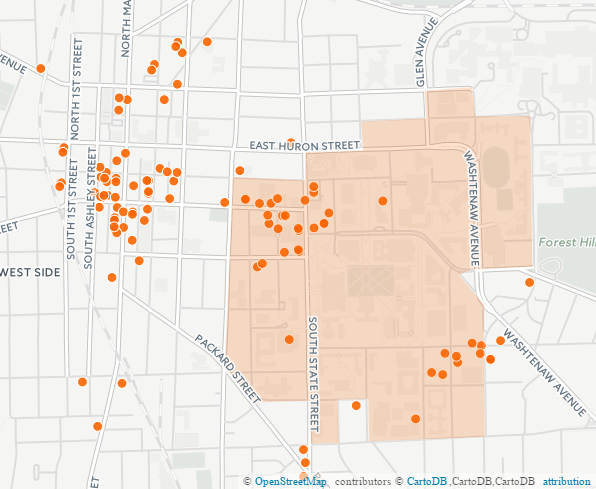 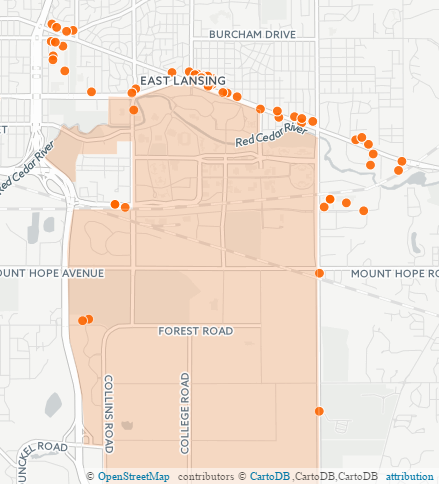 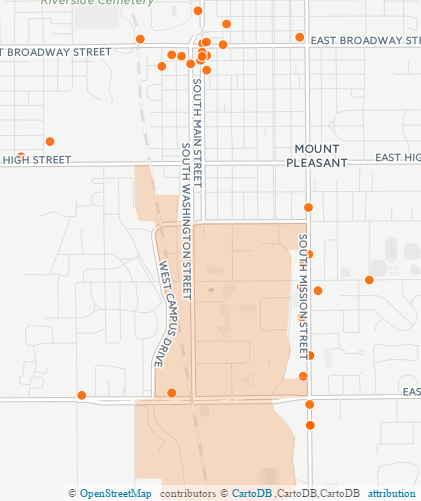 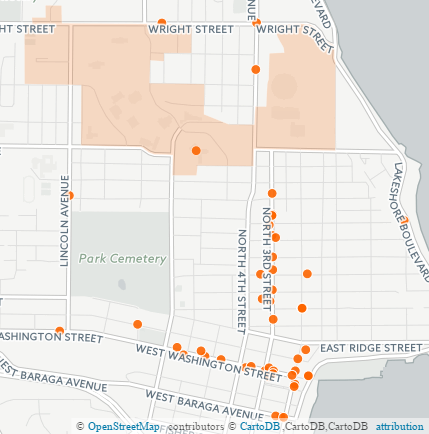 “College students,” said Mt. Pleasant bar owner Rick Swindlehurst in a bit of understatement, “have a tendency to party.”

The owner of four city businesses, two of which cater to students, Swindlehurst has profited from a steady stream of college students who have poured north from campus over four decades (Swindlehurst does not own the “pint night” bar).

“Everyone knows they’re drinking,” he said.

In Ann Arbor, party stores and bars ring the campus, as they do in East Lansing and Kalamazoo and Marquette and elsewhere, offering a ready supply of the most popular intoxicants in America and the tools to consume them. There’s thirsty Thursday, half-off Wednesday and, in Mt. Pleasant, the Tuesday “Pint Night.”

Students can buy a lime-shaped ice cube mold at Campus Corners Liquor at State and Packard in Ann Arbor, a sleeve of Solo plastic cups, and enough ping pong balls to play beer pong for eternity. Don’t want to buy six? You can get one for a dollar at the counter.

The drinking culture has spawned a wide range of providers and benefactors and has evolved with the times, taking advantage of social media and technology to promote a product used regularly by roughly seven in 10 college students. Being underage often isn’t much of a barrier: Fake IDs bought online from China and elsewhere make it tough on bouncers across the state and country.

“They’re getting better all the time,” Swindlehurst said.

WHERE EVERYBODY KNOWS YOUR NAME

At Rick’s American Café in Ann Arbor, regular customers are greeted by name at the door through an electronic sign – Welcome Johnny! – as soon as their phone detects the bar’s wifi signal, which has tracked, with the customer’s consent, their credit card purchases at the bar.

Student customers get smartphone alerts of Rick’s specials and discounts and, if they are premium members, their photo may appear on the screen in the bar. Other bars use Hooks, a social media app, or Twitter and Facebook.

Anything to keep the party rolling.

On game day in Mt. Pleasant, that party rolled into a liquor store on Mission Street, just east of campus. At 10:15 a.m., a line of students holding cases of beer and flavored liquor formed near the register.

Several students are familiar with the cashier, who greets them by name.

“Right or wrong, it’s part of the college experience,” said Scott Ellis, executive director of the Michigan Licensed Beverage Association, which has programs to train servers to serve responsibly.

Other entrepreneurs have found a niche on the periphery of the campus bar scene.

Kim Morisett, a single mother attending grad school at CMU, bought a minivan, painted “Grab a Cab” on it and began ferrying the festive and drunk around town.

Four days a week she drives students from campus to parties and bars and back, $3 a ride. She has regular customers in part, she said, because of the quality of her service: She makes sure they get home safe at the end of the night.

“Half the time you can’t trust them to go into the right house,” she said. “They’ve had so much to drink.”

So she tours campus on drinking nights, small garbage cans on hand to accommodate the dozens who vomit in her van each year. As many as a 100 students catch a ride in a given night, and, with the CMU dorms more than a mile from the bar scene, she’s one of several cab companies catering to students.

The Wayside Central hosts a discount beer night on Tuesdays that is popular with Central Michigan University students. (Bridge photo by Malachi Barrett)

PARTYING FOR THE PARTY

Early in the evening – she works from 10 p.m. to 2:30 a.m., Tuesday, Thursday, Friday and Saturday – students pile into her van already brimming with a few beers or vodka shots. Called “pregaming,” it’s a common practice across the country, where students get ready for parties by, well, partying.

“When they get to us, they don’t have fresh livers,” joked one Ann Arbor bar owner, noting that he’d rather serve the kid who hadn’t already been drinking.

Among college freshmen nationwide, nearly half who admit to drinking say they “pregame.”

By the end of the night, as bars start mopping up the spilled beer and counting the day’s profits, there are only a few left to benefit. Late-night food joints and cabbies stand ready to squeeze one last dollar out of the party.

And one of them is Morisett, who casts a motherly eye toward her customers, drunk or not.

“I’m the only one that night who cares they’re safe,” she said.