ANN ARBOR — The University of Michigan has named Santa Ono — an outgoing leader in higher education, known for engaging students and advocating for mental health support — as its next president.

Ono, 59, who once crowd surfed the student section during a football game at UBC, said in a speech Wednesday that he has “always loved the energy of a great public research university.”

Here’s Ono — known for engaging with students and being pro-athletics — crowd surfing: pic.twitter.com/AyP3ghaJQS

“Students and scholars are eager to come here to engage and to contribute,” Ono said. “And I can’t wait to partner and to interact with the students of this great institution on all the campuses of the University of Michigan.”

Denise Ilitch, a U-M Regent and co-chair of the presidential search committee, said the 18-member committee had 30 meetings, seven listening sessions in the community and gathered more than 1,000 online survey responses.

There was a strong interest in hiring someone with strong emotional intelligence, communication and listening skills. 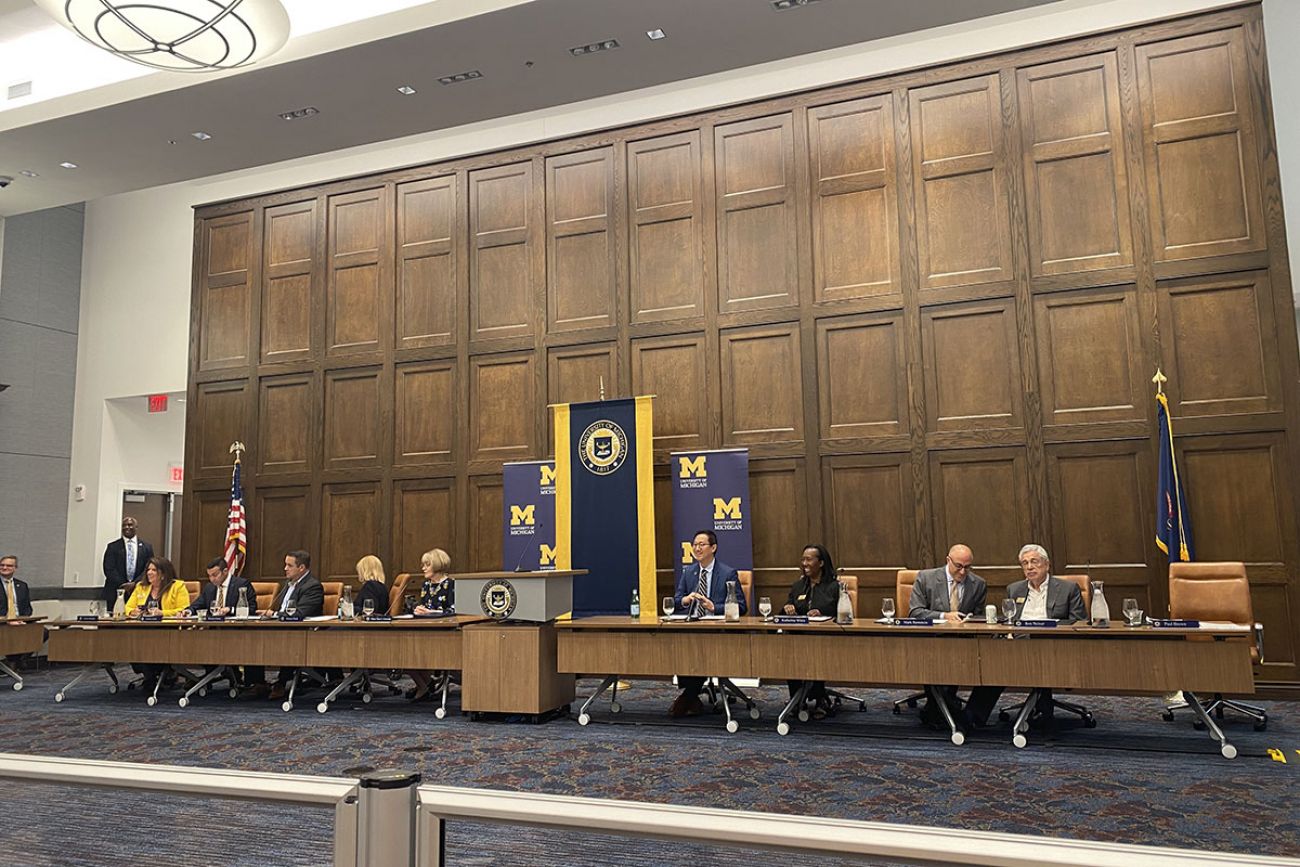 The U-M Board of Regents unanimously voted to approve Santa Ono as the 15th president at the University of Michigan.

“Dr. Ono is relentlessly positive, he understands the critical role of collaborative relationships in working toward a common goal and he loves the students he serves,” Ilitch said.

Ono said he wants to make U-M stronger, more engaged and more inclusive, adding that he wants to be there for all students. He also said he understands that U-M’s athletic programs are a point of huge pride.

“It knits the whole community together,” he told reporters. “So I think that there's a tremendous synergy between academics and athletics and I want to do everything I can to ensure Michigan competes at the highest level.”

There were also personal considerations in his move. In an open letter to the UBC community posted Wednesday, Ono called the U-M presidency a “once-in-a-lifetime opportunity,” but also cited the challenges that Western Canada posed to helping care for aging parents.

His parents live in Baltimore and his wife’s mother lives in Halifax.

“All three of them increasingly need us and we are unable to provide that support from across the continent,” he wrote. “After several decades of taking care of us, it is our turn to take care of them.”

Ono’s first day as president will be October 13.

Why Michigan needed a new president

He indirectly succeeds longtime President Mark Schlissel, who the U-M Board of Regents fired in January. Before being removed for what the board said was an inappropriate relationship, Schlissel had drawn heat from both student and faculty groups who said he was aloof and unresponsive to many of their concerns.

Mary Sue Coleman has served in the interim president role since Schlissel’s firing. She was previously the president from 2002 to 2014.

Ono will be the 15th president in the history of U-M — regularly ranked as one of the world’s top public universities. He is of Japanese heritage, was born in Canada and raised in the United States. He is the first Asian American to lead the school.

Allen Liu, associate professor of mechanical engineering and immediate past chair of the executive arm of the Faculty Senate, said he is “very happy” with the hire. He said he hopes Ono’s leadership will allow the university to move forward following criticism Schlissel faced in his handling of sexual misconduct scandals including a provost, Martin Philbert, and a former U-M sports doctor, Robert Anderson.

Liu said there was a perception that Schlissel didn’t always care about faculty concerns and he hopes Ono will take a more proactive approach and be “more personable.”

“I think this is an opportunity for the leadership and the faculty to re-establish trust after the Philbert, Anderson and others issues have happened in the last few years, (it’s) very much needed.”

Anjali Francis, a rising junior, told Bridge she is excited about Ono’s dedication to mental health and said she did not feel Schlissel shared that same commitment.

Claire Hao, recent graduate and former reporter and editor at The Michigan Daily, the student paper, said in her time covering the university she talked to him once and that was during an interview. After Schlissel’s January firing, she wrote a widely-read column urging people to take the university’s issues seriously and not just revel in the memes after Schlissel’ downfall. She said Wednesday she hopes Ono will prioritize building relationships with the approximately 65,000 students at the university’s three campuses.

“It seems like Santa Ono taking selfies with students is a pretty regular occurrence,” she noted. “I doubt Schlissel ever took a selfie with a student. Maybe he has, but I just don't know about it.”

“Schlissel sightings on campus were rare and when they did happen, it was, you know, a photo from afar.”

Michael Huang, a rising senior at the university, told Bridge he also hopes to see more engagement with students.

“It felt like (Schlissel) was kind of brushing off a lot of the concerns that students brought up,” Huang said. “I do hope that this new president will be more open in terms of communicating and…be more receptive to what students are saying.”

Ono said during a question-and-answer session with the media that students often move universities forward at a faster pace since student activists “usually, they're on the mark.”

Communicating with students through social media

While Ono is known for his student engagement in in-person settings, he’s also known for his communication on social media. He has over 22,000 followers on his Twitter account at UBC. He said being a president includes being “chief connector,” though he joked he is “not brave enough” to try TikTok yet.

He said when he was the president of the University of Cincinnati, where he had a Twitter following of over 60,000, he would get direct messages from students when a vending machine would run out of Cheez-Its. He said he was able to make a phone call and get the snacks replenished.

An article from the UBC student newspaper, The Ubyssey, reported that Ono also had an “open door” policy to those who were concerned about climate change issues.

“I think it's great that Santo Ono seems like he’s actually willing to meet with people who want to meet with him,” Hao, the recent U-M graduate, said. “Schlissel obviously wasn't, activist groups on campus had to mount pressure campaigns to try to talk to him.”

In his remarks Wednesday, Ono said U-M has the resources to make a difference on climate change,

“We are and we should be more cognizant than ever of the irreparable damage that we are doing to our planet with this climate emergency,” Ono said.

Moving the university forward past scandal

Before being removed as president, Schlissel faced scrutiny and controversy. He had promoted Philbert to the provost position in 2017 and, in 2020, the university released a report detailing decades of alleged sexual misconduct by Philbert. U-M paid out $9 million in settlements to eight women.

Additionally, longtime Michigan sports doctor Robert Anderson was found to have a  “prolonged pattern of sexual misconduct involving many members of the University community,” according to a 240-page report detailing Anderson’s and the university’s actions. Anderson’s actions started long before Schlissel was in charge but Schlissel was accused of a lack of transparency during the investigation. Anderson died in 2008.

Liu, the former faculty senate chair, said he would like to see the new president establish an office of ethics and compliance, which the Senate Advisory Committee on University Affairs advocated for in a resolution passed in April. He said he knows that many universities have faced faculty misconduct allegations, but he said U-M has lacked accountability for offending administrators and has failed to insulate faculty from retaliation for reporting wrongdoing.

Ono’s background as a biomedical researcher, like Coleman and Schlissel before him, fits U-M’s role as the leading public research university in the U.S., said Stephen Rapundalo, CEO of MichBio, the state’s life sciences advocacy organization.

As president, Rapundalo said, Ono’s background is likely to help nurture a culture of innovation and entrepreneurship at the institution that generated $1.5 billion in research expenditures in 2021.

The value of that extends beyond the campus to the rest of Michigan as discoveries in laboratories and classrooms across the flagship university’s three campuses turn into businesses all over Michigan.

“The University of Michigan is a major economic driver,” Rapundalo told Bridge. “There's a lot of intellectual property and discovery that comes out of it that gets put on the path to commercialization, spurring companies … that hopefully will grow and bring jobs and provide opportunities.”

Lou Glazer, president and co-founder of Michigan Future, Inc., which advocates for policies that will help the state thrive in a knowledge-based economy, said U-M is a huge asset for the state, but the university faces several challenges ahead.

Ono has spoken publicly about his own struggles with mental health and advocates for more support for those experiencing mental health challenges. Liu said he’s seen mental health concerns rise amongst students and faculty on campus. He hopes Ono’s leadership will help make a difference.

Ono has shared practical tips on how parents can support their college students’ mental health by writing an op-ed for the Vancouver Sun in September 2020. He said he knows that students have experienced a “sense of isolation” at times during the pandemic.

“I will pledge to you today that as president, I will make certain that this university is always there for you on good days and bad, so that you can succeed and thrive to maximum potential that you’ve demonstrated to us from the moment you expressed an interest in coming to Michigan,” he said Wednesday.

Huang, the rising senior, said he hopes mental health is made a priority at the school.

“(The) administration kind of decides to turn a blind eye to how having such a rigorous academic program can affect the mental health of students,” Huang said. “I think it's extremely important.”

Silvia Pedraza, a U-M professor of sociology and American culture and chair of the Senate Advisory Committee on University Affairs, said she is impressed with Ono’s commitment to anti-racism.

“He also has a strong commitment to research and academic excellence,” she told Bridge. “I think we're in good hands, we need leadership we can trust.”

Ono will receive a base salary of $975,000, subject to annual increases at the board’s discretion, a U-M news release said.

He will also receive $350,000 in deferred compensation starting after the first year. His benefits will also include housing in the President’s House on campus, an expense allowance and a car and driver.