Less than a year ago, Kalamazoo’s Western Michigan University was grappling with a $76 million budget cut tied to falling enrollment and the COVID-19 pandemic.

But following a $550 million gift from anonymous donors announced Tuesday — the largest single donation in history to a U.S. public university — officials see a notably brighter, even transformative future.

“Thanks to the incredible generosity and foresight of these donors who have chosen this gift, we will be able to make a difference for students who are here today and the next 100 years,” WMU President Dr. Edward Montgomery said at an afternoon news conference.

The donation, from unnamed “graduates of the university,” is to be split three ways: $300 million for Western Michigan’s Homer Stryker M.D. School of Medicine; $200 million for need-based student financial aid, faculty hiring and other university initiatives,  and $50 million for the school’s athletic program. The money will be given to the university's foundation over the next 10 years.

Before the announced donation, WMU’s endowment stood at $480 million, far below the $12.3 billion reported at the state’s flagship school, the University of  Michigan.

Though officials are still working through details of how the funds will be spent, Montgomery said he expects a boost to scholarship and financial support for incoming students, as well as to current students who need support to remain in school.

He also said the donation will “enhance the diversity” of the WMU faculty, as well as responding to the demands of young people for commitment to social justice.

“If we are going to change our condition, we must envision a new future, one that is more holistic, more inclusive,” Montgomery said. “We are committed to the hard work and the actions needed to maximize the potential of every member of our community to create prosperity for all.”

In addition, Montgomery said funds will be tapped to “expand and broaden” support for counseling and student mental-health assistance.

Paula Termuhlen, dean of the Stryker School of Medicine, said she expects the donation will allow students “to go to medical school and not worry about the financial pressure. We anticipate we will create enough scholarship dollars that every one of our students will receive something.”

Termuhlen also said part of the donated funds would be used to renovate two floors of the medical school that were not completed.

The previous record for a single gift to a U.S. public university was $500 million, given on two occasions: once from the Helen Diller Foundation to the University of California at San Francisco in 2017, and once from Penny and Phil Knight to the University of Oregon in 2016, according to a list compiled by the trade publication "The Chronicle of Higher Education."

In 2011, WMU officials announced an anonymous $100 million donation that laid the groundwork for the medical school, reported at the time to be the largest donation made to a public university or college in Michigan.

That donation was later confirmed to be connected to the wealthy Stryker family, a financial legacy built by orthopedic surgeon and businessman Homer Stryker, founder of medical equipment manufacturer Stryker Corporation.

Ronda Stryker, one of Homer Stryker’s three grandchildren, and her husband, William Johnston, a university trustee, revealed in 2014 they were the donors who gave “in excess of $100 million” to launch the school. Ronda Stryker, who has a master’s degree from WMU and is a former special education teacher in the Kalamazoo Public Schools, is estimated by Forbes to be worth $6.7 billion.

In 2005, a group of still-anonymous donors announced The Kalamazoo Promise, a pledge to pay up to 100 percent of the tuition at any Michigan college for graduates of Kalamazoo's public schools. Though the donors were not identified, area residents suspect the Stryker family was behind that gift as well.

As of 2019, The Kalamazoo Promise had paid out $117 million and sent about 7,000 Kalamazoo students to four-year universities or community colleges.

Tuesday’s announcement of a $50 million donation to the athletic department is expected to take the sting out of a $6 million hit to the 2020-21 athletic budget, as it fell from $31 million the year before to $26 million. That was primarily due to lost revenue from the COVID-19 pandemic, which largely put a halt to college sports in March of 2020.

“This couldn’t be a bigger dream come true,” Beauregard said Tuesday of the $50 million infusion.

Beauregard expects the funds to expand scholarship access that would “bolster our effort to support student athletes who come here from all over the country and the world.”

Montgomery, the university president, said discussions between school officials and the prospective donors “had been going on for a while in various different forms…and they came to a head relatively recently.”

Asked for his initial reaction to the amount of the proposed donation, Montgomery, hired as president in 2017, quipped: “I got my job.” 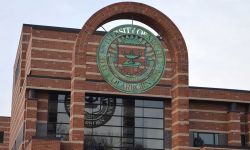 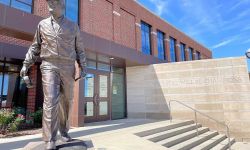 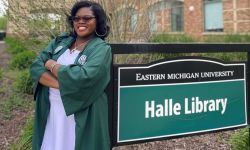