In-depth reporting on Michigan's largest city and surrounding communities, including deep dives into the big changes afoot in Detroit, its schools, neighborhoods, institutions and city hall.

The painful truth: A wife with questions gets answers from a nurse who saw her husband die

Detroit Police killed their sons at the Algiers Motel. No one ever said sorry.

Poverty and joblessness, fuel for '67 riot, even worse today

Unemployment and poverty drove much of the violence that swept across Detroit in the summer of 1967. Today, those numbers are even worse.

A brief history of poverty and jobs in Detroit

Detroit’s boom and bust auto industry explains a lot about the poverty and jobs challenges the city faces today.

Politicians and media reports indicate Detroit is in the middle of an economic resurgence. That’s true for the central business districts. That’s not the case for many residents in the poorest neighborhoods

Tired of waiting for the garbage trucks and housing inspectors who never seemed to come, here’s how one ordinary, extraordinary Detroiter restored beauty and a sense of safety to the street she calls home 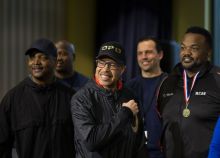 In a city with long memories of racial torment, Detroit’s police chief seeks to turn a corner

The city’s feared, nearly-all-white police force eventually integrated after the 1967 riot. But crime and mistrust within the city’s African-American community did not fade so easily. Residents say a new chief is helping to ease old animosities

In Baltimore Freddie Gray died after being arrested and thrown in the back of a police van. In Cleveland, video captured images of 12-year-old Tamir Rice as he was shot by a Cleveland officer. And in Ferguson, Missouri, 18-year-old Michael Brown was shot dead in the street. These events and others have increased racial tensions in cities across the nation in a way not seen since the 1960

In the aftermath of Bridge’s story on the Detroit Community Schools, the Michigan Department of Education is checking for certification violations

One poor neighborhood, one struggling school

A low-achieving Detroit charter, now run by former city councilwoman Sharon McPhail and administrators with checkered pasts, is the only high school in Brightmoor. Other city neighborhoods face a glut of schools. Can a new commission bring order to Detroit’s chaotic school landscape?

Detroit schools and the $715-million Band-Aid

Seven reasons why Detroit Public Schools (and other Michigan districts) are destined for future deficits, even if their debts are erased now 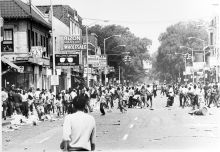 African Americans may now control who’s elected mayor or to city council, but nearly 50 years after racial despair led to deadly insurrection and rioting, a view persists that white political and business interests continue to steer the city’s course

Riot or rebellion? The debate over what to call the 1967 disorder continues

Was it a riot or a rebellion? Or both? Nearly five decades after the last fire was extinguished, the discussion continues over what to call the events in Detroit during July 1967

Sunday, July 23 through Thursday, July 27: What happened, by the numbers.

In Iraq, a Detroit DJ fights ISIS on the airwaves

Noor Matti’s Christian-Iraqi family risked their lives to get to Detroit after the first Gulf War. Now Matti is relying on the values, and music, he learned in the Motor City to help struggling refugees.

A year post-bankruptcy, Detroit still has a long to-do list

The nation’s largest Chapter 9 proceeding left Michigan’s biggest city standing on its own legs again, but those legs are shaky. Detroit Journalism Cooperative members look at how the stakeholders are doing.

Despite calls for putting a “pause” on accepting refugees in light of recent terror attacks, Detroit officials tout the many ways newcomers can contribute to the city’s resurgence.