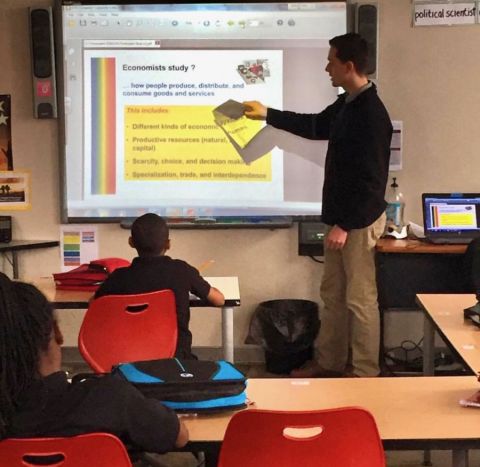 Like many school leaders in Detroit, Danielle Robinson spent the month of August doggedly searching for teachers.

Robinson is the top Detroit official for Phalen Leadership Academies, a nonprofit charter school network that took over three Detroit schools from another manager in July.

By late August, with the start of school just days away, Phalen still needed 34 teachers to staff Murphy, Stewart and Trix elementary schools.

And there wasn’t much time.

“We did $5,000 retention bonuses,” Robinson said. “We did  $5,000 signing bonuses. We did $1,000 referral bonuses … We needed to make sure we had enough teachers because that’s a huge thing for students when they come back — a permanent teacher in the classroom. ”

Phalen’s challenge was extreme — a problem exacerbated by management changes and by the dissolution of the state-run recovery district that had been overseeing the three schools. They’re now overseen by a Detroit district unsure of its plans for charters.

But the schools’ scramble for teachers is hardly unusual in a city where generous school choice laws, a decentralized school system and a shrinking pool of available teachers have so destabilized the teacher labor force that many school leaders say they’re constantly looking for new educators to hire.

“I’ve never seen anything quite like this in my career,” said Mark Ornstein who heads the seven-campus University Prep charter school network in Detroit. “There’s just not enough people to fill the number of vacancies ... We’re all seeing more and more teachers leaving in the middle of the year.”

So many schools are looking for teachers — in August, September and throughout the year — that educators can wait for bonuses and enticements to grow before accepting an offer. And every time a teacher takes an offer and leaves, that creates a vacancy likely to be filled by a teacher from another school. That other school then has a vacancy to fill.

As teachers leave, students suffer. Research shows that teachers hired during or just before the school year are less effective than those who’ve had more time to prepare and properly learn their school’s curriculum.

Experts say the teacher churn is driven in part by the fierce competition between schools in Detroit that has intensified as charter schools have expanded — they now comprise nearly half of the city’s schools — and as more suburban schools actively recruit city kids. Parents often enroll in multiple schools while weighing their options and schools are left to guess how many students they’ll have and how many teachers they’ll need.

“It’s another consequence of this hyper-competition that has been created by our charter school programs and laws here in Michigan and it’s really working to the detriment of everybody involved,” said Mike Addonizio, a professor of education policy at Wayne State University.

“The schools are competing for students,” he said. “The students will dictate the revenues and that dictates their budget and therefore their ability to hire staff … And if a school is plagued with high teacher turnover, that makes it difficult for students. “Outcomes won’t be good and as that information becomes public, those schools don’t do well in school choice decisions and enrollment will drop.”

Some Detroit schools are now pushing back on teachers who quit mid-year by putting financial penalties into teachers’ contracts that discourage them from leaving, but advocates say real solutions will require major changes.

Among them: improving conditions in schools so that teachers want to stay and creating partnerships between district and charter schools to minimize instability.

“In other states, schools set their budgets and know their enrollment so much further ahead that they can come to a [spring] job fair and know exactly who they need to hire,” said Karey Henderson, the director of the Metro Detroit Charter Center who was the assistant superintendent of a 10-school Michigan charter network called Global Educational Excellence.

In Michigan, enrollment “doesn’t really get fleshed out often until (student) Count Day” in  October, Henderson said. “Teachers are nervous and they’re applying around …. We would be trying to train new teachers but then a public school would get more kids and need more teachers and our teachers would get a call … We would have to start out the year with long-term subs in the classroom.”

Then, if parents see a substitute in the classroom, they might move their child to another school — and the churn continues.

Much of the attention this year has focused on the difficulties facing Detroit’s main school district as it works to fill scores of vacancies  in its 106 schools, but the problem is playing out somewhat differently in charter schools where teachers tend to be younger and are more likely to change jobs — or to leave the profession entirely — from one year to the next.

A recent report from the state education department found that charter school teachers are twice as likely to leave their jobs compared to teachers in traditional public schools. The same report found a higher teacher turnover in Michigan as compared to the national average and put the price tag of replacing a teacher at nearly $10,000. 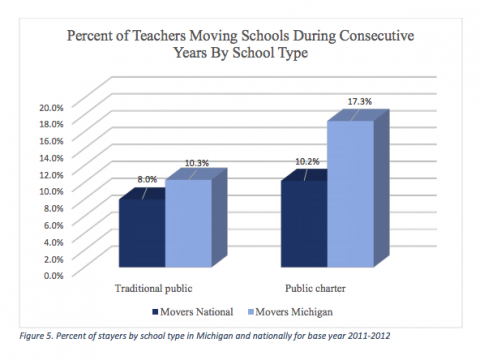 Another state report shows the problem for all schools could get worse in coming years as the number of people applying for teacher certifications drops precipitously — much faster than the number of students who need a teacher.

School leaders say they’re taking steps to attract more teachers. Detroit school  superintendent Nikolai Vitti says he’s working to build a “teacher pipeline” that would encourage district graduates to go into education, do their training in Detroit and work here when they graduate.

Leaders from Grand Valley charter schools have also been meeting with their counterparts from schools overseen by Central Michigan University to discuss a “coordinated talent strategy,” Kimball said.

“There’s definitely an interest in coming up with a shared solution,” Kimball said. “We need to design a solution to really stabilize the marketplace for teacher talent and to develop a pipeline [for future teachers].” 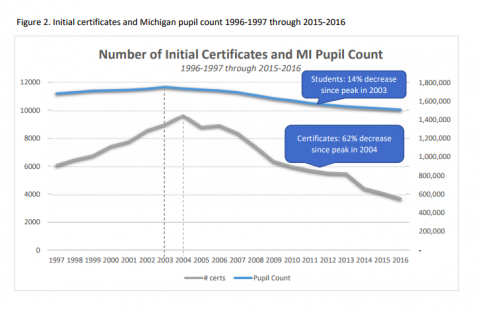 In the absence of a citywide solution, individual schools are doing whatever they can to fill classrooms.

At the Phalen Leadership Academies, Robinson, the top official, said her schools  applied for emergency certifications to put some people without teaching credentials into classrooms. The new teachers will get extra coaching to help them succeed, Robinson said, but it was a tough choice for an Indiana-based network that prides itself on hiring only highly qualified staff.

“None of our other schools in our network use emergency permits,” Robinson said.

Some charter schools have created bonus systems that require teachers to return for the next school year in order to collect last year’s bonus.

Others — including the University Prep schools — have contracts that don’t allow teachers to get their full summer pay unless they return for the new school year.

Social studies teacher Aaron Ames said he learned that the hard way when he resigned his job at the University Prep Academy Middle School on Aug. 18 to take a position with a different school.

Suddenly, he said, his last paycheck disappeared from his bank account.

University Prep had paid him on Aug. 15 but took the money back when he quit three days later.

Ornstein said his teachers’ contracts begin on Aug. 1. If they resign before teacher training begins on Aug. 21, it means they didn’t do any work and shouldn’t have been paid.

Ames was furious. “It kind of makes me want to quit teaching,” he said. “They should find a way to keep teachers honestly, instead of trying to punish us for leaving.”

“At one charter school, the teachers call it the ‘death tax,’” said Nate Walker, an organizer and policy analyst with the Michigan chapter of the American Federation of Teachers, which represents teachers in the main Detroit district and in a handful of city charter schools. “They’re loading up penalties on teachers to try to deter them from leaving so close to the beginning of the school year … but that’s not going to fix the problem because the labor market in Detroit is destabilized and decentralized.”

Walker called for schools to give teachers contracts earlier in the year and to coordinate with each other so that teachers can know they’ll have income and health insurance over the summer even if they plan to change jobs in September.

The current structure encourages teachers to hold on to last year’s job until the insurance for next year’s job kicks in in August or September, Walker said.

“This is a lot easier said than done because of the multi-operator system that we have right now, but if employers were to make the commitment that any time they’ve given someone an offer to work in the fall, they’re also willing to turn on insurance for that employee, that could solve at least part of the problem,” Walker said.

The only way to fix the rest of the problem, Addonizio said, is to address the reasons that teachers leave in the first place.

“The best thing that a school or a school district can do to combat the teacher turnover problem is to improve working conditions in the school,” Addonizio said. “For new teachers, their compensation might mean something, but more than anything, they want some mentoring, assistance from veteran teachers. They want some help.”

Henderson said schools need to find a way to start working together — instead of just poaching teachers from each other.

“Get everyone in the room,” she said. “I know everyone is protective over how they manage their schools and run their H.R. but if you get enough H.R. people together in the same room, I think you can come up with a solution.”