“We have to make sure we address all of the issues,” Alex Resendez said as he walked into a conference room at the Community Health and Social Services Center, a medical clinic in Southwest Detroit.

He’s about to interview Felix Valbuena, a doctor and chief executive officer of CHASS. The two are there to livestream their conversation to the thousands of followers of radio station La Explosiva’s Facebook page. The topic is COVID-19 vaccines and the myths surrounding them. 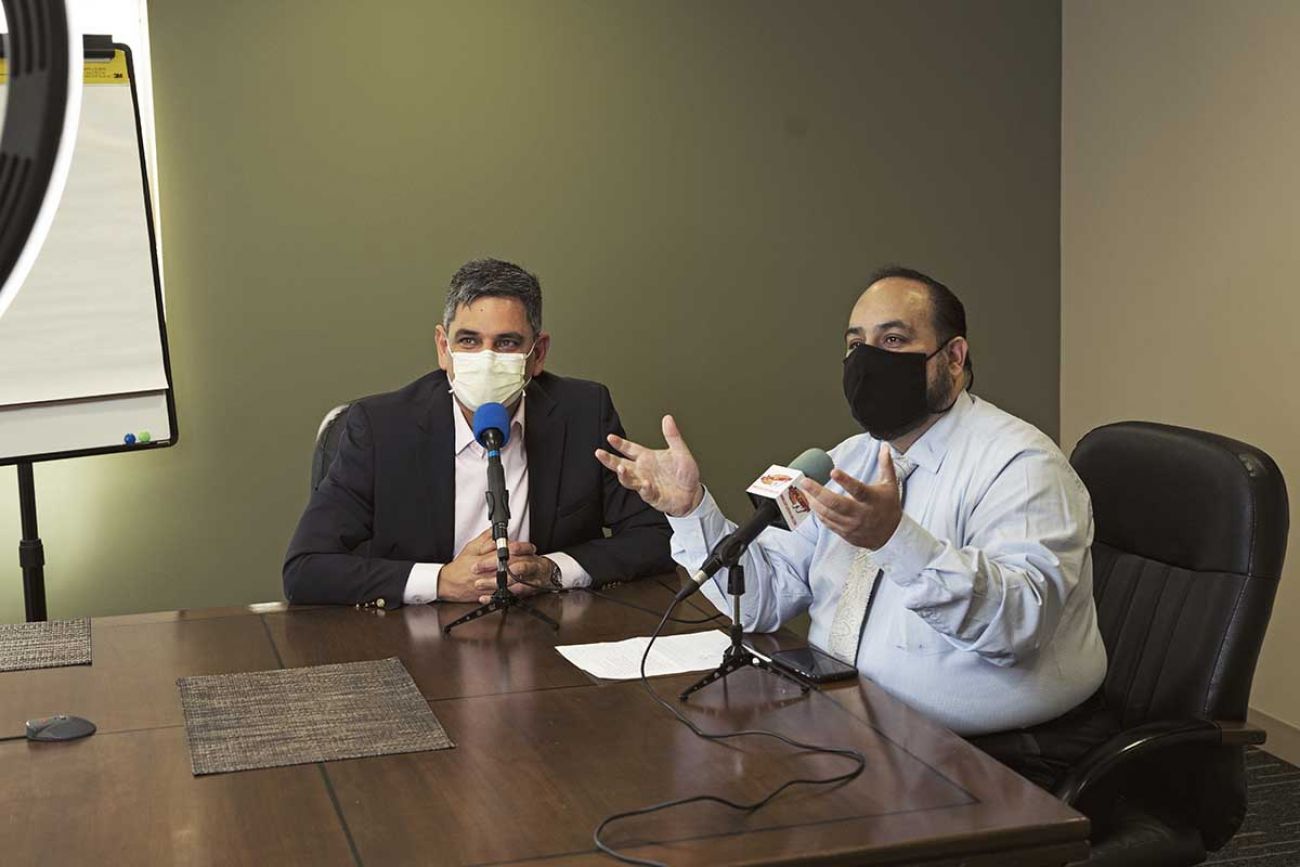 Alex Resendez, radio host and Program Manager at La Explosiva 1480 AM, interviews Dr. Felix Valbuena, MD., and CEO of CHASS Center about COVID-19 vaccines and all of the myths surrounding them. (BridgeDetroit photo by Gabriel Guzman)

Resendez, known to many as El Batman, is the charismatic radio host on La Explosiva 1480-AM, a Mexican radio station based out of Ypsilanti that is a lifeline to immigrants nostalgic for music from back home. Walk into any Mexican business in Detroit, and La Explosiva is almost sure to be playing in the background.

The pandemic forced the tiny radio station to shift gears. It’s become a de facto public service station tasked with disseminating fact-based information on COVID-19 and the vaccine to Southwest Detroit, home of the largest Latino population in Michigan. La Explosiva has become a primary source for information about the virus and about the vaccines, cutting through the rumors and disinformation.

It wasn’t easy. Resendez and the other La Explosiva DJs had to learn how to get authoritative information from the Centers for Disease Control & Prevention website and the State of Michigan. Sometimes, they found themselves having to translate the information and get it out as quickly as it was coming in. When Gov. Gretchen Whitmer gave a press conference about COVID, La Explosiva did live simultaneous translations for its listeners.

The challenges of reaching the Latino community and convincing them to get the vaccine are enormous.

Detroit is no different. Maria Nava, 46, lives in Southwest Detroit and listens to La Explosiva. She recently recovered from COVID-19 and said she hasn’t decided whether she’ll get the vaccine.

“We don’t know what the vaccine is made of,” Nava said. “I’d rather wait a year and see what happens.”

She’s not alone. Across all socio-economic backgrounds, Latinos, specifically Mexicans and Puerto Ricans, have expressed distrust about the COVID-19 vaccine.

When news broke about the Johnson & Johnson vaccines and their connection to six cases of a rare and severe type of blood clot, Latinos who are already mistrustful of the vaccines became even more hesitant.

Resendes has interviewed Dr. Valbuena several times during the pandemic. On a sunny day in March, they were together again, this time to talk about the vaccines and all the falsehoods circulating about them in the community.

Valbuena is highly respected as a medical expert, especially by Southwest Detroit’s Latino community, as is CHASS Center, a federally funded state-of-the-art clinic that just celebrated its 50th anniversary.

“Why are Latinos so afraid to get the vaccine?” Resendez starts off.

“Because it is something strange that is being put inside your body.” Valbuena replied, adding that “disinformation travels faster than the truth.”

Resendez looks into the camera and stresses to the audience not to rely on social media and word-of-mouth for information on vaccines: “Listen to the people who are the most knowledgeable on the subject, especially to the scientists, not your neighbor or comadre,” he said.

“These vaccines went through a very rigorous testing system,” Valbuena adds. “A lot of people are concerned that this was done very quickly. But the technology we have today helped us create and quickly produce the vaccines.”

For two decades, the Mexican diaspora has listened to ranchera cumbia and banda music, and received local news and community information on La Explosiva 1480-AM. Although there are major broadcast networks, such as Univision and Telemundo, listening to the radio is still one of the main ways that immigrants get information.

Getting correct information from a trusted source is critical for the highly vulnerable Latino population, which is “nearly twice as likely to get COVID, more than four times likely to be hospitalized for COVID, and nearly three times more likely to die from COVID,” according to data from the Centers for Disease Control and Prevention.

“The most important thing we have ever had to do is to inform listeners and explain to them that the virus exists, that it’s spreading, and it’s killing people,” Resendez said. “There is a vaccine, and people need information on it.”