Ford Motor Co.’s Michigan Assembly Plant in Wayne will gain about 382 jobs after improvements to make an all-new Ranger there. The project is part of a $2 billion investment by Ford in Michigan that was announced on Thursday. (Courtesy photo from Ford Motor Co.)
June 2, 2022
Paula Gardner (Email)
Business Watch
Gov. Gretchen Whitmer

MACKINAC ISLAND — Michigan scored a win on Thursday in its drive to preserve automotive production here amid massive changes coming to the industry from the shift to electric vehicles.

Ford Motor Co. rolled out its plans to add 3,260 jobs in the state as part of a $2 billion investment in nine factories and a new shipping center.

The impact of those models will be felt in three Wayne County factories, with the rest of the investment targeting upgrades to other production sites and the new shipping center construction in Monroe.

Combined, the announcement represents transformation for Ford, said Steven Croley, chief policy officer and general counsel at Ford Motor Company, during a press briefing at the Mackinac Policy Conference. The company plans to switch its global portfolio to 50 percent electric by 2030.

But it’s also meaningful to the state, he said, as the company commits to retaining a slice of its future production in Michigan, where the mobility industry is worth an estimated $304 billion to the economy.

The changes planned by Ford go beyond the individual factories and “will have some multiplier effects, given the suppliers’ economic ecosystem, increased spending and so forth,” Croley said.

The employment growth could reach as many as 74,000 jobs, Croley said.

“So much of this is happening in Wayne County,” said Gov. Gretchen Whitmer. “But this obviously impacts the whole state, and that's why this work is so, so critical.” 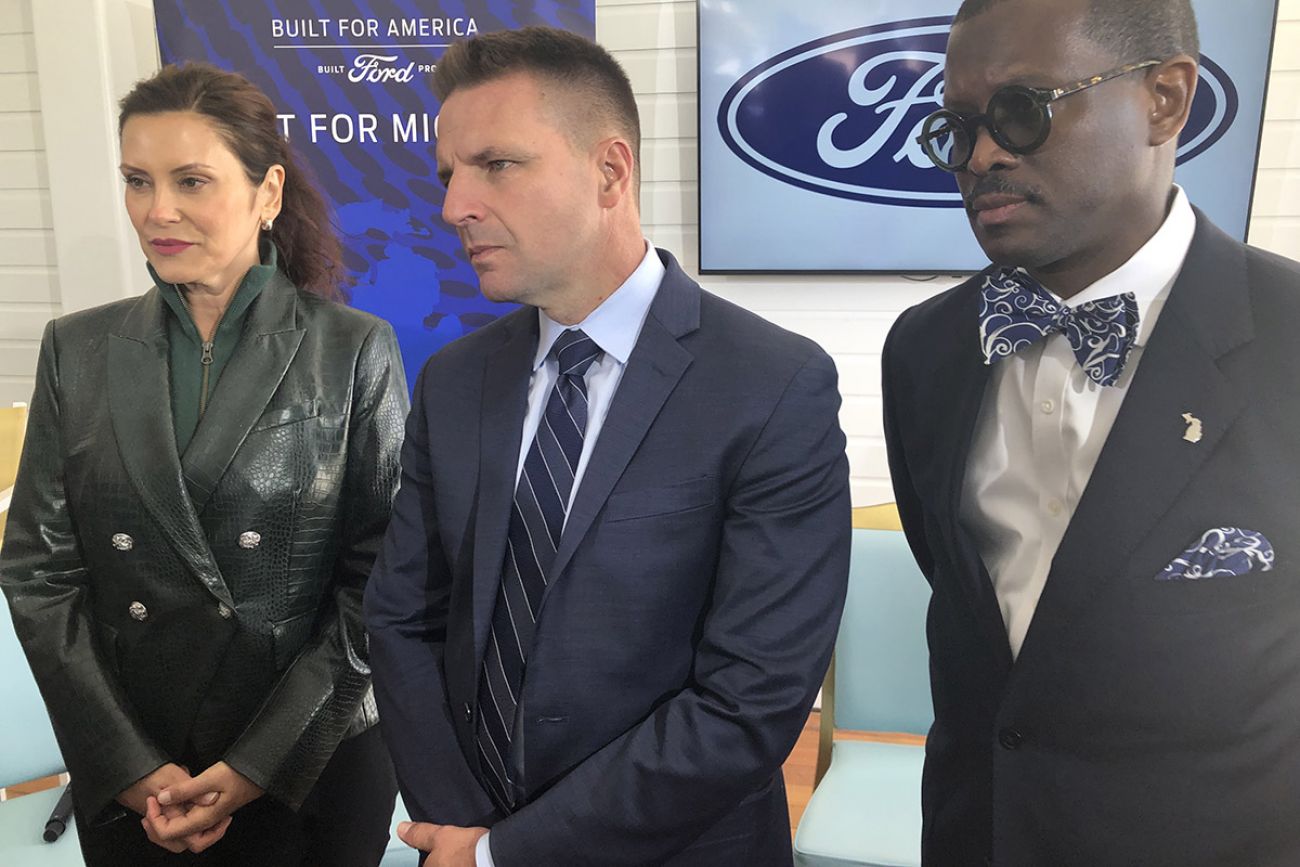 Legislators agreed, including Jason Wentworth, a Republican from Farwell and speaker of the House, who called manufacturing “the backbone of our state.”

The investment by Ford, he said, “can help to show Michigan and show the world that we're competitive right now in manufacturing.”

Overall, manufacturing represents about 14 percent of jobs in Michigan. Of the 603,000 manufacturing jobs in the state, just over 10 percent are in auto production.

Ford’s decision to expand into existing assembly plants also signals a step toward stability for Michigan’s automotive manufacturing, Glenn Stevens, executive director of MICHauto, an initiative of the Detroit Regional Chamber to advocate for the industry, told Bridge Michigan after the announcement.

Michigan has fought to attract massive new EV battery plants that will anchor much of the new production. Wins include expansion in Lansing, announced in January. However, losses also are on the state’s list, including Ford turning to Kentucky and Tennessee last fall and Stellantis choosing Kokomo, Indiana, in late May.

Beyond that, as the gas-fueled engine production swaps out for EV manufacturing, Michigan could lose half of its engine plant jobs in the next few years. More upheaval is expected among the state’s supplier base.

“We have 12 assembly plants here. And those 12 assembly plants are our lifeblood to their communities,” said Stevens. “We don't want them to go anywhere. So we want to protect them and have them evolve to where eventually maybe they'll all be electrified.

“But they’re going to have to have these investments to stay here.”

Whitmer said the Ford deal was able to happen in part because of incentives that the state provided the company from its SOAR Fund, which was established in December with $1 billion to attract large-scale projects.

Michigan plans to contribute $135 million toward the expansion, with about $101 million coming from the SOAR fund and about $34 million in personal property tax exemption from both cities and the state. The Michigan Strategic Fund finalized the incentives on Thursday morning.

About 80 percent of the SOAR fund is committed, and remaining deals in the pipeline could exhaust it soon, Quentin Messer Jr., president and CEO of the Michigan Economic Development Corporation, told Bridge on Wednesday.

Whitmer has requested an additional $500 million for the fund in the next budget, something both Democrats and Republicans are saying they support as budget negotiations continue.

The $2 billion heading to Michigan is among $3.7 billion that the Dearborn-based automaker said Thursday that it expects to spend on bolstering its production and staffing in three states.

The bulk of the state’s factory job creation comes from increased production of the new F-150 Lightning electric truck, reaching 150,000 units per year at Rouge Electric Vehicle Center in Dearborn. That will result in 1,508 new jobs, according to Ford.

The plans from Ford also include adding a new facility in Monroe. It plans to spend $35 million to build a packaging facility in the Monroe County community near the Ohio border that will create more than 600 jobs when it opens in 2024 to accelerate parts shipment.

Beyond Michigan, the investment announced on Thursday supports Ford’s commercial vehicle production, including a new EV that is expected to launch within five years.

Ohio will see $1.5 billion in investment along with a forecast 1,800 news jobs at the Ohio Assembly Plant in Avon Lake, west of Cleveland. An additional $100 million is earmarked for improvements to the Lima Engine and Sharonville Transmission plants, which are expected to hire an additional 90 workers.

The Kansas City Assembly Plant will add a third shift — along with a projected 1,100 jobs — to boost Transit commercial van production and launch an electric version.

Meanwhile, Ford reported its monthly sales on Thursday, data that showed that the company’s  battery electric vehicle sales totaled 6,254 for May, up 222 percent over last year. It said it is growing almost 4 times faster than the overall U.S. electric vehicle segment last month.

Ford stock [NYSE:F] closed at $13.89 on Thursday, representing a 36 percent decline so far this year. It’s the third-largest public company in Michigan, with a market capitalization based on outstanding stock shares of $55.8 billion.