Frankenmuth kept to its chickens during pandemic. Now, it’s thriving.

FRANKENMUTH — Close to 3 million visitors will stop in this German-themed downtown this year to see dachshunds race, drink at swim-up bars in water parks, and shop in Main Street stores that sell cheese, kilts and 50,000 Christmas ornaments.

Frankenmuth, known as Michigan’s “Little Bavaria,” is heading into its busiest season as one of the state’s thriving commercial centers, despite challenges to its hospitality sector from pandemic closures and restrictions the past two years.

Like the larger cities of Traverse City, Ann Arbor and Grand Rapids, Frankenmuth is still trying to rebalance its economic drivers — the restaurants, hotels and stores that cater to tourists. And business owners say they remain anxious about staffing and ever rising costs.

But Frankenmuth is emerging from the pandemic with busy dining rooms and hotels, and millions of dollars in investments that go beyond tourism.

“They are having a record year in terms of sales, and tourism has been solid for them this year,” Justin Winslow, CEO of the Michigan Restaurant & Lodging Association, told Bridge of the town’s hospitality businesses, which include about 900 hotel rooms.

In interviews along the downtown’s Main Street shopping district, business operators say they haven’t allowed frustrations over pandemic disruptions — like the 152 days the Bavarian Inn dining room was closed under state emergency orders — to publicly linger, even as many of the businesses settle into a new normal.

Crowds at hotels and restaurants hit record-setting levels in 2021 and those numbers could return this year, though they’ve been less consistent. Staffing remains lower at the Bavarian Inn Restaurant & Lodge than before the pandemic, said Amy Zehnder Gross, general manager of the restaurant, in its fourth generation of family ownership.

But after a dip in June as gas prices crossed $5 a gallon, summer business was good.

“And I expect that this fall will be very good,” Grossi said, adding, “The Christmas time is one of our busiest times of the year. … I think we will be in a similar situation this year.” 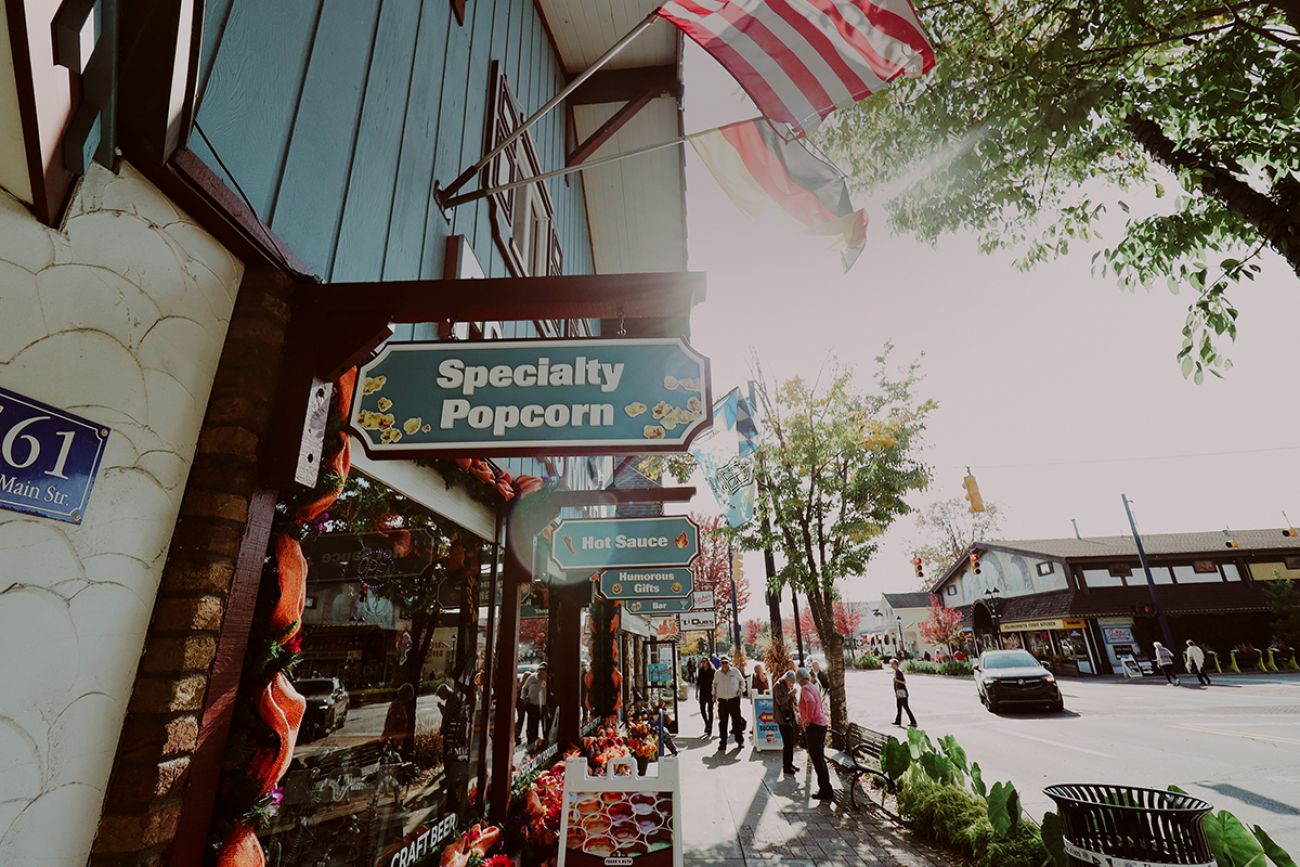 About 3 million people per year visit Frankenmuth, which hosts events and travel groups year-round. Many of the visitors are from southeast Michigan, but the town also draws from all over the state and Canada. (Bridge photo by Cybelle Codish)

Then there’s chicken, the lead player in 80 percent of the Bavarian Inn’s meal sales. The restaurant expects to serve 550,000 pounds of fried chicken this year, even as costs surged by 40 percent — resulting in a 3-percent menu hike earlier this year.

Still, Frankenmuth’s economy keeps churning beyond its chicken dinners. Businesses within and outside the tourism sector are expanding and moving forward. If there are hard feelings about the Whitmer administration’s aggressive pandemic policies, you won’t find them advertised on storefronts or played out publicly.

The city works hard to make downtown a relaxing place that feels like a vacation, said Grossi of the Bavarian Inn, and visitors don’t expect politics in that. 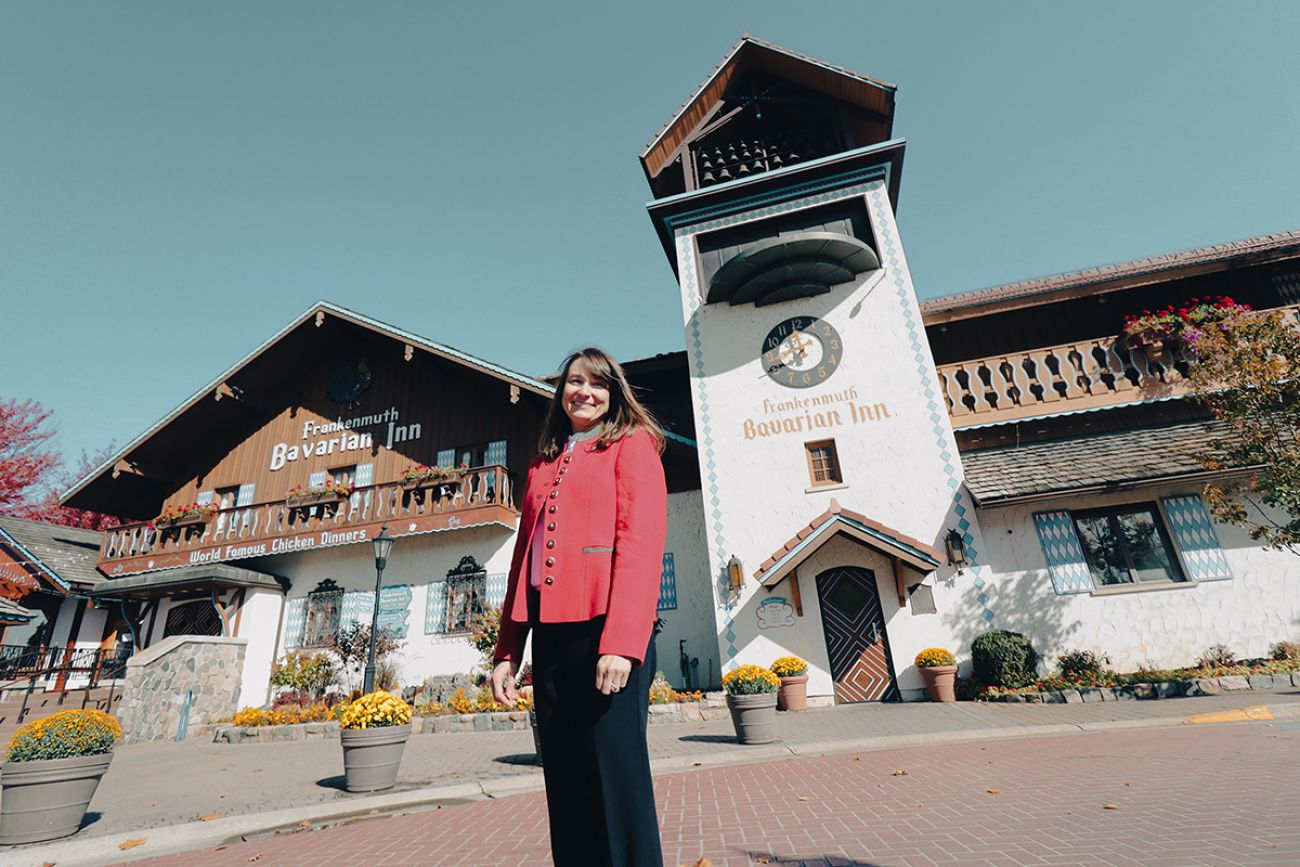 Amy Zehnder Grossi is general manager of the Bavarian Inn Restaurant, which includes a Made in Michigan lounge, an outdoor beer garden and lower level shops and bakery. (Bridge photo by Cybelle Codish)

Business leaders in town say they hung together as COVID descended in spring 2020.

“We knew, for the town to survive, we would have to welcome guests back,” said Bridget Smith, the city manager, who organized a pandemic task force in March 2020 that met regularly over Zoom.

The group decided early on it would uniformly follow state orders, clearly communicate expectations for regulations like masks and brainstorm how to bring the fun back while following health department rules. That meant nixing the annual day after Thanksgiving holiday walk last year in favor of a 40-foot singing Christmas tree that could be viewed over weeks while people stayed 6 feet apart.

“The beauty of a small town is you can get just about everybody to row the boat in the same direction,” Smith said. “And they really did.”

Jamie Furbush, president and CEO of the Frankenmuth Chamber of Commerce, said many businesses struggled, but their focus stayed on what they could do next instead of cultivating “pushback” to pandemic restrictions that led to anger in other communities.

“They recognize that their community wouldn't be the same without their tourism businesses,” Furbush said. “And that became really clear really quickly when the streets were empty and the restaurants were closed.”

Local businesses like the Bavarian Inn and Zehnder’s — operated by family members across the street — also benefited from owning their own properties. That allowed them to make financial decisions without worrying about rent, while keeping them invested in how other businesses in town are faring, Smith said.

“Clearly, COVID was difficult, devastating, all of those things kind of rolled into one,” Smith said. “And we were just very fortunate that we had the ability to be … nimble.” 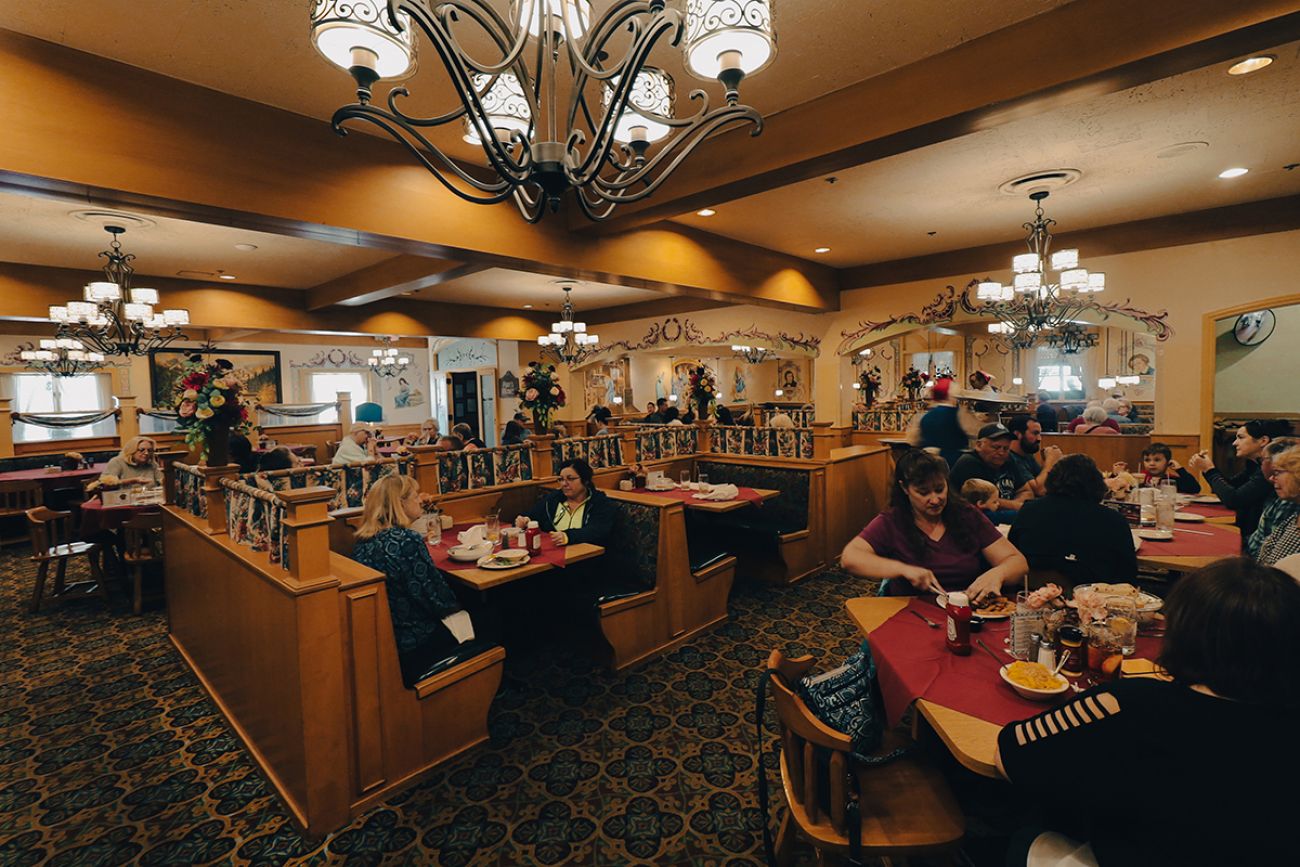 Staffing shortages led the Bavarian Inn to turn to technology to control long lines, cut food prep time and better predict orders. Still, as it gets busier this fall and winter, some areas of the business may not be able to open due to the shortage of workers. (Bridge photo by Cybelle Codish)

Frankenmuth has been adept at withstanding “uncertain or difficult economic times,” said Brian Calley, CEO of the Small Business Association of Michigan (SBAM).

“The entrepreneurial spirit, the management of the community, the way that they do business there has proven to be a real success story,” Calley said.

Then there are cities like Frankenmuth, with demand buoyed by tourism, plus the buffer of stable employment from other kinds of business, like Frankenmuth Insurance, which has 700 employees.

Millions in industrial investment also took place during the pandemic, which allowed increased production at Frankenmuth Woolen Mill, which makes pillows and comforters, and Star of the West Milling Co., which makes flakes for national cereal brands from a newly opened building on North Main Street near its corporate headquarters. 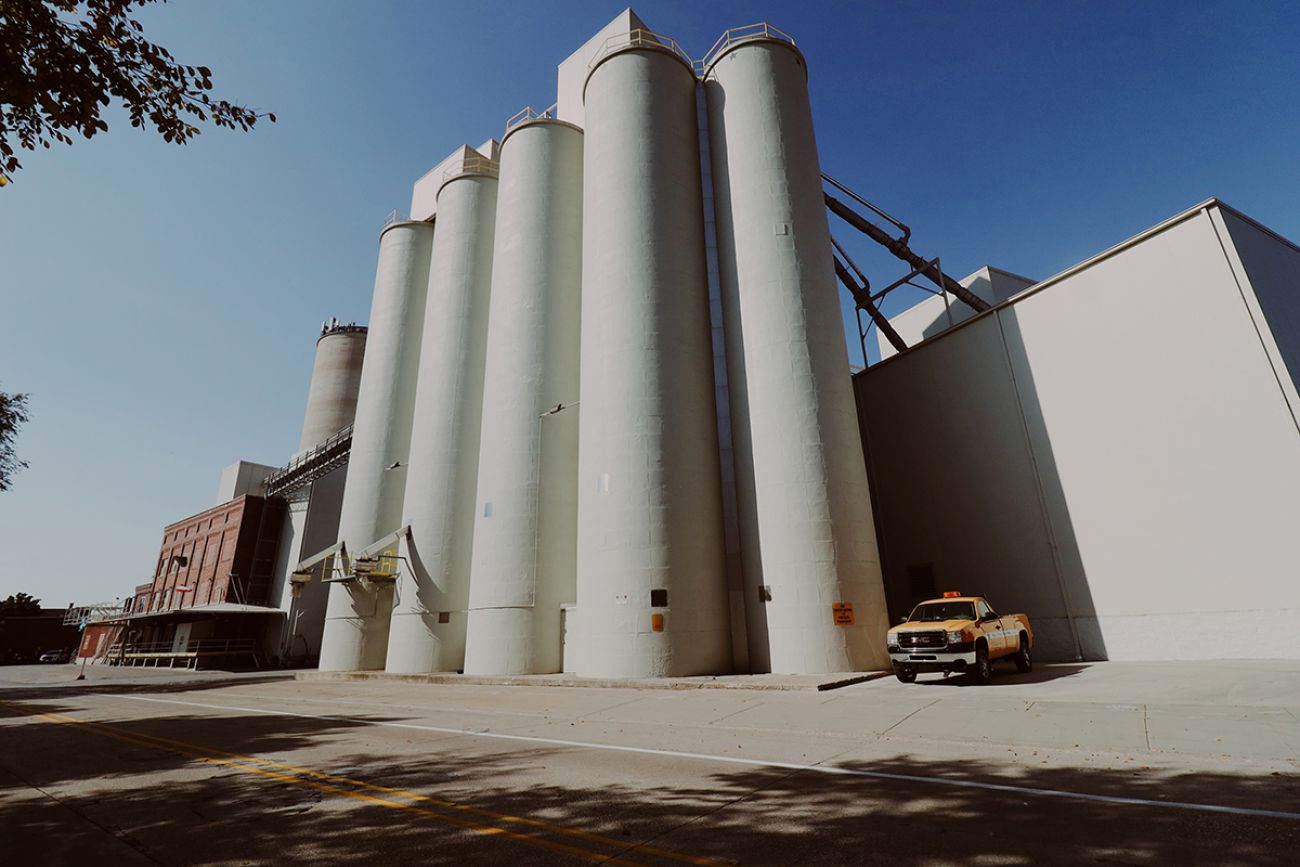 Star of the West Milling Co. has been in Frankenmuth for more than 150 years. It recently expanded onto North Main Street, where grain flakes are produced for national-brand cereals. (Bridge photo by Cybelle Codish)

Visitors started to return to Frankenmuth by summer 2020, and the city added picnic tables to help boost take-out orders. By late that fall, many in the city took heart from the line at Bronner’s CHRISTmas Wonderland, the landmark Christmas decorations store, where people stood in line for hours to enter while the number of shoppers was restricted. It showed visitors were eager to be back. In January 2021, a scaled-down Zehnder’s Snowfest offered just a few ice carvings, but people returned for that, too.

Federal Paycheck Protection Program loans helped bolster Frankenmuth businesses, including Bavarian Inn and Zehnder’s. And a change in state law allowing swim up bars was celebrated in town because it benefitted the water parks at hotels operated by the Zehnder’s and Bavarian Inn companies.

Frankenmuth is a traditionally conservative community and business owners likely lean in that direction as well, said Matt Curtis, co-owner of the Frankenmuth Woolen Mill.

Yet even in mid-October, weeks before the midterm elections, Frankenmuth isn’t a town where business leaders discuss politics with outsiders or display their personal choices on storefronts.

Jim Holcomb, president and CEO of the Michigan Chamber of Commerce, said during a recent stop in Frankenmuth that when he travels across the state he might find places where business owners are more vocal about their support or opposition to candidates for governor. Not in Frankenmuth, which he said, “is such a collaborative area.”

There, he said, he most often hears the desire to have political conversations about policy and candidates' vision.

Frankenmuth officials recently approved plans for another hotel south of downtown. The 80-room extended stay property is needed, said Smith, the city manager, because hotel rooms sell out during events like the snow festival and Oktoberfest.

Interest in opening businesses has been high since the Great Recession, Smith said, but “real estate is rare,” particularly downtown. But expansions continue. Michigan Brands, a meat processor, recently received a tax abatement for a $2.48 million, 8,500-square-foot addition to its business in Frankenmuth. 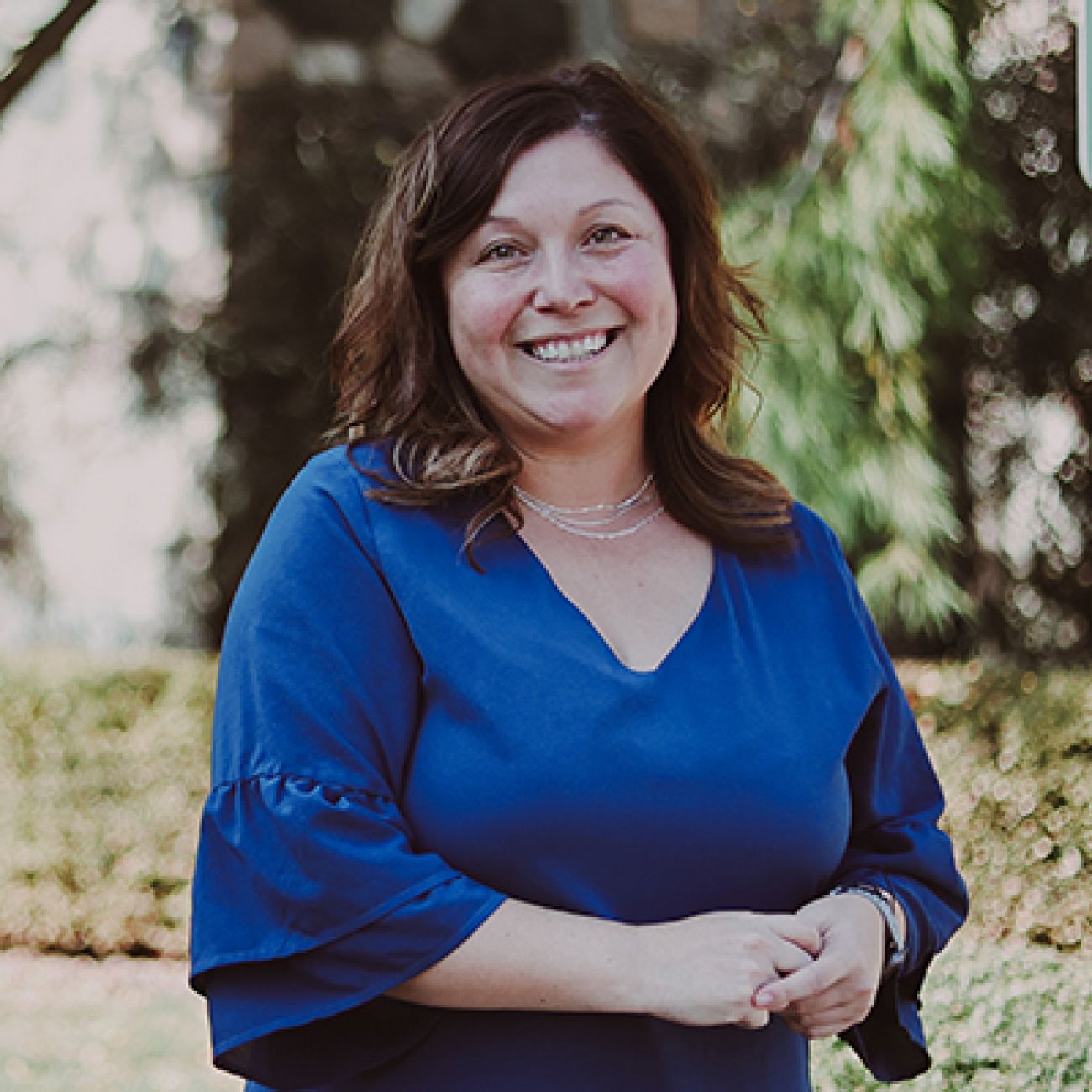 City manager Bridget Smith says millions in investments have been made by Frankenmuth businesses since the start of the pandemic, and more are in planning stages. (Bridge photo by Cybelle Codish)

City and business leaders are eyeing ways to stretch out the core downtown, including a newer farmers market to the north. It’s also looking to boost recreational opportunities for people who want to kayak and canoe on the Cass River.

Even so, inflation remains a concern.

At Star of the West Milling, CEO Jim Howe said farmers who supply the mill — so it, in turn, can deliver milled grain to Kellogg Co. and General Mills — “are getting much more for their produce, but their costs are going up even faster. Fertilizer costs went up 200 percent from Christmas to March, he said, and transportation costs went up with the price of fuel.

“Everything up and down the food chain has gone up fast and high,” he said, prompting price increases for consumers.

Frankenmuth’s longevity as a tourist favorite may give it an edge. So will its newer offerings. Even in a town steeped in tradition, visitors likely will notice new twists amid familiar businesses there, like the expanded Cheese Haus, two New Orleans-style beignet shops and a DIY blacksmithing shop in River Place Shops.

The Bavarian Inn is also planning to expand.

At the same time, the restaurant is investing in ways to thrive with fewer workers. A new potato peeler gets the job done in half of the time, and table-seating technology is now used in the kitchen to better anticipate orders. Next summer, there may be self-serve beer taps in the outdoor beer garden.

“That's what we really want,” she said. “So we're looking for policies that allow us that freedom to do that.”