Ray Walsh read eight books in the last two weeks, something he didn’t have time to do until the coronavirus pandemic closed the doors of his two busy used bookstores in East Lansing.

Michigan allowed retailers around the state to open within the last week, in some areas with exceptions. But Walsh is still finding time to read— and waiting to reopen.

Even after two months with doors closed to customers, not every retailer is reopening immediately.

Walsh’s experience during the shutdown may be typical among them: The closure kept him on edge as he wondered how long finances would hold out. And now opening comes with its own concerns, as he considers whether employees will return to work — and if customers are ready to venture into his store.

Now he’s aiming to reopen June 12, and hoping that he’ll be able to get systems in place that follow the state’s guidelines.

“It’s ironic. I got into business because I didn’t like taking orders from anybody,” Walsh said. “But it’s such an unusual situation for retailers at this time.”

He started selling books 50 years ago when he was a student at MSU, drawing on his interests and the proximity of tens of thousands of students for a potential customer base.

There have been many changes in the area over the years, most recently as developers focused on the near-campus area for high-rise apartment apartment developments. Chain bars and restaurants now fill many of the newer and more expensive storefronts.

His industry is changing, too.

“Our customer base is aging, and many more people are downsizing and disposing of things,” Walsh said. “The younger generation seems to be less book-, less tactile-oriented.

“That’s affected most used bookshops,” he said. “There are not that many around anymore. Most are selling online.”

But Walsh wants his businesses to survive the pandemic. “We’d sincerely like to stay open for another 50 years.”

The challenges of the industry before COVID-19 were surmountable, Walsh said. The pressures since haven’t abated as the state allows retail to open.

Most of the stores’ employees moved home to live with their parents, and others are following Michigan’s stay-at-home order. Walsh  won’t ask them to return before that, even if the order is extended. But he’ll use them immediately when they’re available to restock shelves and price items he’s had in storage.  He estimates he won’t need new inventory for another year, so he’s put buying on hold. 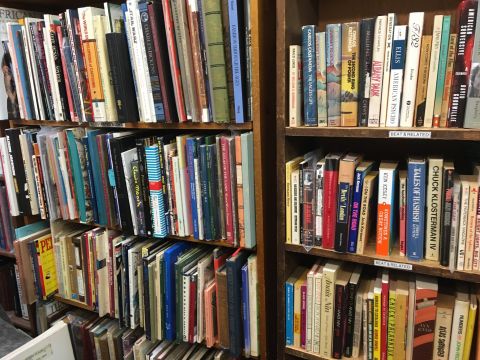 His nine employees persuaded Walsh to start a GoFundMe campaign, giving the public a chance to contribute cash toward maintaining payroll and the costs that didn’t pause when the store closed: insurance, utilities, rent. He cut his own draw in half, trying to trim costs.

So has the various small business grants and loans available to independent retailers. Walsh received one from the East Lansing Downtown Development Authority, and applied for another. He said the local and statewide organizations doing this signals recognition that “they’re realizing if they didn’t, a lot more businesses will be in trouble and not able to open.

“Small businesses need all of the help that we can get.”

Walsh misses his customers. Like many owner-operators of stores, he gets to know his shoppers.

He does some internet sales, and that’s increased a bit during the COVID-19 crisis. But it’s a fraction of his business, and he needs shoppers in his stores.

“Are people going to be coming in to do local shopping? We hope so,” he said. “We certainly need it. Or will they be doing more on the internet?”

Walsh plans to keep both stores open. But he’s starting to see closures around campus, where students left in mid-March and learned only this week that they could return this fall. It’s just another sign that reopening is one step toward his business future. How it functions over the coming months is another.

“No one really knows what will happen,” Walsh said. “It’s like a bad science fiction novel coming to life.”