One in five Detroit rentals face eviction. Time to call in the lawyers?

Detroit’s housing meltdown has led to 30,000 annual evictions, a rate of 1 in 5 rentals facing eviction every year

DETROIT –  Safonya Gurley says she got the call on Thanksgiving: She was getting evicted over $5,000 in back rent.

Never mind that the house on Detroit’s east side was a wreck with no running water, persistent mold, a broken toilet and flooded basement –  or that Gurley couldn’t get the management company on the phone and faithfully put her monthly $600 rent in an escrow account toward repairs.

“Evicted? For what?” Gurley recalled with disgust, speaking at a forum about eviction in Detroit on Tuesday.

She’s far from alone. For the past several years, more than 30,000 annual evictions are filed at Detroit’s 36th District Court. That means roughly 1 in 5 of the city’s rentals face evictions each year, according to a recent analysis by The Detroit News.

The deluge of evictions is yet another symptom of a housing crisis that has decimated Detroit, flipping the city from having the one of the nation's best home ownership rates among African Americans to being a majority-rental city.

Now, a decade after evictions accelerated due to the subprime mortgage bust, a group of housing advocates, law firms and foundations are teaming to search for solutions.

One big idea: ensuring that all tenants facing eviction are defended by lawyers in court.

In 2017, only 3 to 5 percent of Detroit tenants with eviction cases were represented by lawyers, according to research from Neil Steinkamp, a consultant who also has studied eviction in New York and Philadelphia.

That’s about half the rate of similar cities, Steinkamp said. Tenants who wander into court alone rarely reach agreements to stay in their homes: Only 28 percent, compared to 62 percent for those with lawyers.

Like many housing issues, Detroit is far worse off than comparable cities, Steinkamp told Bridge. Philadelphia, for instance, has more than twice the population of Detroit, but historically only 22,000 evictions per year, he said.

The displacement has a trickle-down effect throughout the city, panelists said Tuesday.

Not only do evictions lead to blight and health problems, but the displacement of students makes it harder to learn and fuels chronic absenteeism.

That’s a problem for Detroit schools that Bridge Magazine and reporting partner Chalkbeat highlighted last year in its series “The Children of 8B,” which focused on a middle school homeroom where 31 eighth grades had collectively attended 128 schools.

In 36th District Court, which serves Detroit, there are so many evictions that four separate courtrooms are dedicated to them. Judges can process hundreds of evictions before lunch.

Gurley said she won her case thanks to a pro-bono attorney whose evidence forced the “judge to open his eyes wide and big.” But she was shocked at what she saw in the court, she said. 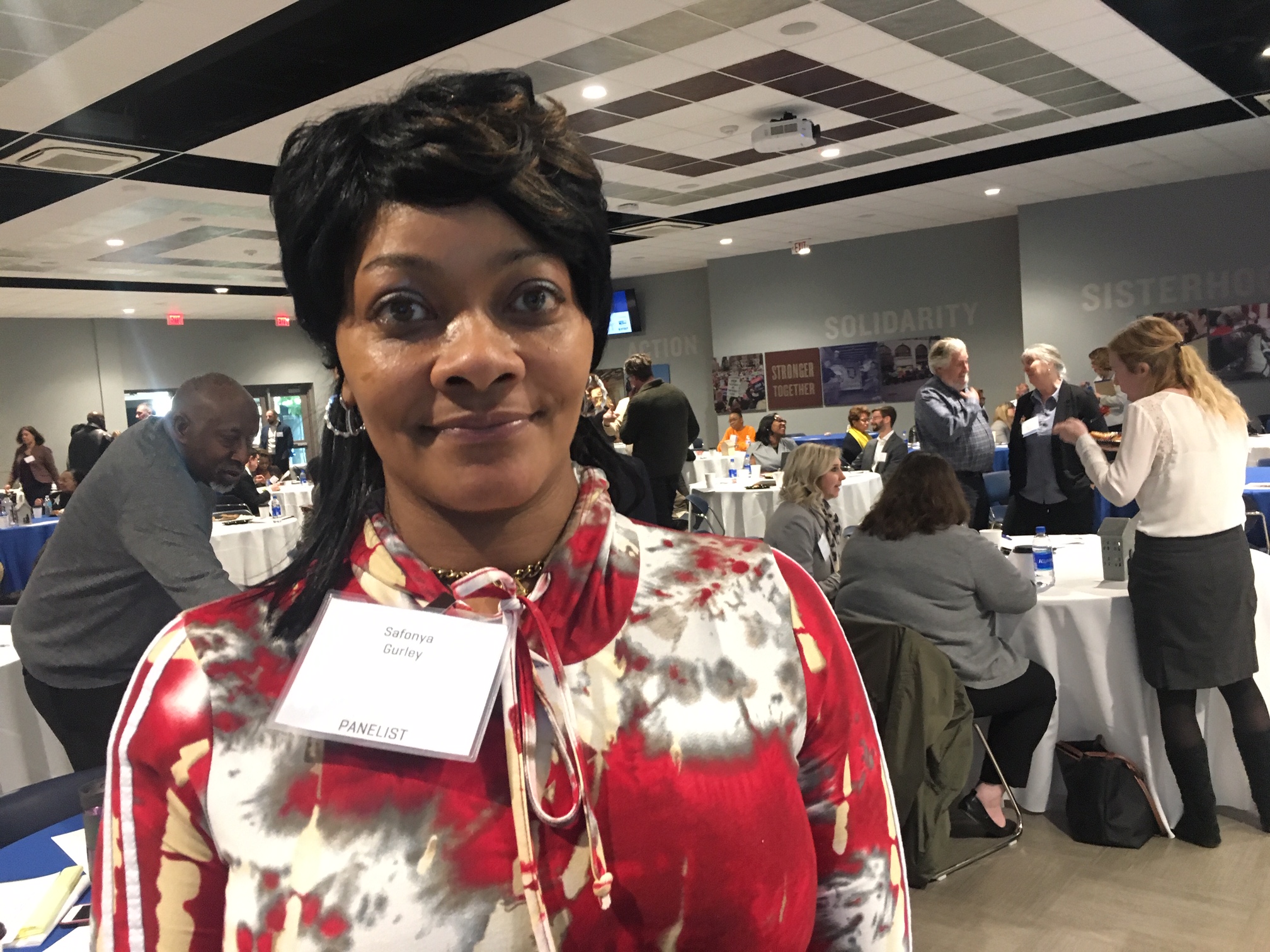 Safonya Gurley, a caregiver, says she has no doubt she would have lost her eviction case last year had it not been for a pro bono attorney. (Bridge photo by Joel Kurth)

“There were so many people signing the judgments (of eviction),” Gurley said. “When it comes down to your word against the landlords, you are always going to lose.”

“I know in my heart that if I hadn’t had a lawyer, I would have lost that case,” she added.

In 2017, New York began a program that guarantees attorneys to low-income tenants. The city will spend about $155 million on the effort, but a study by Steinkamp estimated the city would save $320 million, largely because of savings from costs to shelter those who are displaced.

Since then, San Francisco and Newark have similar programs while others are studying the issue, said Steinkamp, a managing director of Stout, a New York consulting firm.

“When you talk about funding lawyers, it’s like ‘What?’” Jennifer Bentley, executive director of the Michigan State Bar Foundation, said during Tuesday’s forum.

“But when you talk about funding lawyers to help people and make a difference and keep people in their homes, the conversation is different.”

Tuesday’s meeting marks the beginning of the dialogue, Steinkamp said.

As with many big problems in Detroit, from crime to schools to blight and housing and water affordability, easy answers are elusive.

Gurley knows all too well about big problems.

After winning her eviction case, she said she made repairs to the home, painting and installing a water heater.

She’s still renting, but Gurley said the owner is an investor who lives in Las Vegas. In less than one year, she said two separate management companies have collected her rent and raised it from $600 to $750.

Now, she said, the home is in foreclosure because of back taxes. She’s hoping to save enough money to buy it at auction this fall.

“I’ve done so much work, I’d like to keep it,” Gurley told Bridge. “But the problems are deep. So deep.”

Who will pay for these lawyers? Will the fee be set for each case? If lawyers are provided, is there something that would prohibit the "I didn't get good representation" counter-suit?

Years ago, as an attorney, I represented large commercial landlords and housing cooperatives regularly in the 36th District Court. About 95% of the cases were for unpaid rent; the other 5% were for evictions based upon drugs or lifestyle issues. Undoubtedly, there are bad landlords but in those cases their tenants usually were able to qualify for legal aid. What I observed was that an inability to pay rent and/or lifestyle issues were at the core of the eviction problem.

"a wreck with no running water, persistent mold, a broken toilet and flooded basement " Evicted? The place should be condemned, why is she fighting to stay . This story doesn't make sense. Adding a lawyer into the mix only makes things worse, and just because someone is poor doesn't make them right or honest. Setting up an arbitration system is a better solution.

The arbitration idea someone offered is a sure fire way to rail road a solution in favor of landlords. I recall working on arbitrations in securities matters and the system was largely in favor of the securities companies (which I assisted in representation of) and not the individuals. The system favors those with cash.

These tenants need representation and those arguing against it more often than not have a financial stake in it, I do not. It's fairness, parity that is at issue here.

You clearly have never seen what happens in eviction hearings. The tenant's free attorney pushes the case out of small claims into regular court where the landlord, often people of very modest means, get absolutely hosed paying their attorney as the legal aid attorney drags the case out for months with no rent to make their mortgage payments. Sorry but You know nothing.

You know you kinda have to take some blame here. Why was you behind on the rent? Alot of questions here

OMGosh, Yes. Although evictions are a 2 way street, there are many Landlords who collect the rent and do nothing to repair. As a social worker, I would advise people on navigating unfair eviction. I am not an attorney, and I would advise them to get an attorney.