Road salt is threatening the Great Lakes’ famous fresh waters and creating even bigger problems for the inland rivers, lakes and aquifers – not to mention your car’s undercarriage.

But decades of experiments with other options, from beet- and corn-based deicers to sand and chemical mixes, have yet to yield an alternative that’s anywhere near as effective and affordable.

“It’s far cheaper than anything else out there, and it works far better,” said Craig Bryson, spokesperson for the Road Commission for Oakland County, which maintains Michigan’s largest county road system.

As much as his agency cares about the environmental impacts of road salt, slippery roads are a major winter crash hazard, and “human life has to be the single highest priority in our decision matrix.”

Scientists and lawmakers have long worried about the environmental costs of the rock salt mined from underground caverns (like this one in Detroit) and then spread over roadways to keep snow and ice at bay.

Just one measure: Last month, scientists at the University of Wisconsin-Madison and Michigan State University released results of a study revealing that society’s reliance on rock salt is salinating Lake Michigan.

As Michigan endures another icy winter, state and local road officials say the most realistic remedy to Michigan’s salt pollution problem is simply using less. And a pilot program to replace solid rock salt with a liquid salt brine is helping them do just that.

In Lake Michigan, the Wisconsin and MSU researchers found, concentrations of chloride (an element in salt) have increased dramatically since the 1800s, from 1-2 milligrams per liter of water to 15.

And salt concentrations are creeping upward by another milligram every couple of years, thanks to million metric tons of chloride that make their way into the lake after dissolved salt seeps into the region’s rivers.

That’s still well below the hundreds of milligrams known to sully drinking water supplies and imperil freshwater species. But even small increases can trigger unknown ecosystem changes and secondary effects such as drinking water pipe corrosion, said Hilary Dugan, an associate professor at the University of Wisconsin-Madison’s Center for Limnology and lead author of the study.

Lake Michigan is still “extremely fresh” water, Dugan said. “There’s no cause for alarm. But I think people should be aware that it is rising and that is fully because of human-derived salts.”

More immediately dire are the dramatic impacts salt can have on inland lakes and streams, particularly those near roads that are heavily salted throughout the winter and early spring.

Some rivers get such intense salt shocks, Dugan said their salinity can mimic ocean water at times. The sudden change can release heavy metals from the riverbed and harm fish and wildlife.

Salt has so altered the chemistry of some inland lakes, their water has ceased to mix. Instead, the dense salt-laden water settles to the bottom, creating oxygen-scarce dead zones. Many North American lakes are in danger of becoming so salty over the next 50 years, they’ll surpass federal chloride standards.

“When you put salt on your driveway or sidewalk, in the springtime, you might notice dead grass on the side,” said Mark Geib, administrator for the Michigan Department of Transportation’s Transportation Systems Management and Operations Division. “That’s because it kills the grass.”

Beets are a bust. But what about brine?

For now, many road crews are focused on using less salt, rather than using some other substance.

In Oakland County, Bryson said supplementing solid rock salt with a liquid salt brine has helped the agency reduce its annual salt usage from about 85,000 tons a year in the early 2000s to 63,000 tons today. 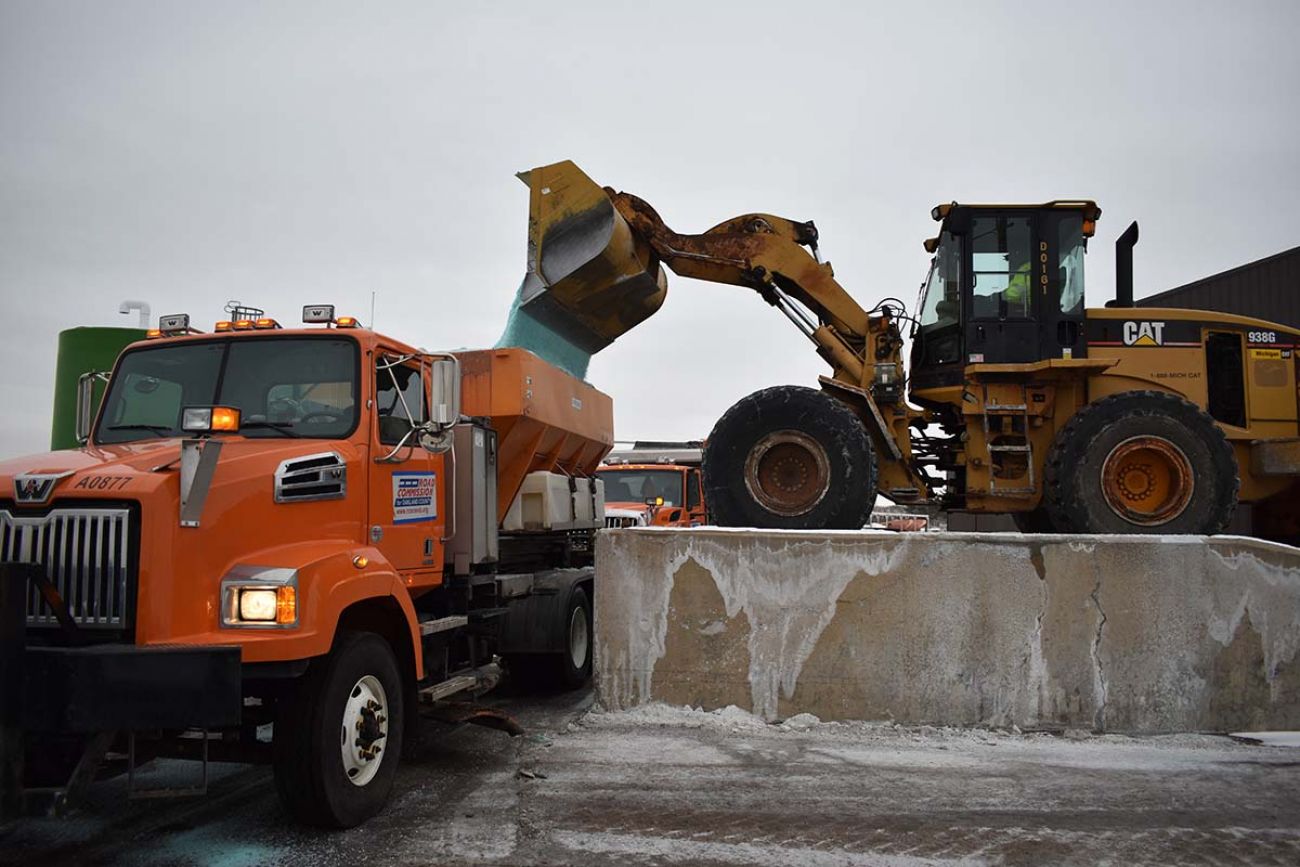 Road salt is the most affordable and effective option for clearing snow and ice from winter roads. But it comes at an environmental cost. (Photo courtesy of Road Commission of Oakland County)

Technological improvements have helped too, he said, including computerized systems that ration salt to prevent overspreading. And simply training drivers to resist “cranking it up full-bore” has made a difference in the department’s salt use, he said.

The naturally-occurring brine is also cheap, he said, costing the county only the price of electricity to pump it to the surface.

The Michigan Department of Transportation is also experimenting with a brine made by mixing rock salt with water to create a 23-percent salt solution, Geib said. A pilot project last year in Montcalm County cut down on salt costs by about 20 percent, Geib said, and worked so well it’s now being expanded to Grand Ledge and Mt. Pleasant.

For a state agency that spends between $25 million and $30 million to purchase 450,000 tons of salt annually, using less is a cost-cutting measure as much as an environmental move. Experiments in other states have helped road crews use up to 40 percent less salt.

And what’s good for the agency’s pocketbook also does less damage to the environment: A 2019 study in the journal Environmental Science & Technology showed that using brine decreased chloride runoff into streams by 45 percent.

Within 10 years, Geib predicted, MDOT could be using brine instead of salt on most Michigan highways.

There are other effective alternatives out there. But they can be orders of magnitude more expensive than salt. The calcium magnesium acetate that’s used on the Zilwaukee Bridge to prevent corrosion on the bridge, for example, is 50 times more expensive.

Other options, such as heated roads, show promise but are currently too cost-prohibitive to use on a broad scale. And simply leaving some roads snow-covered, as is the practice in parts of the U.P., wouldn’t fly in more heavily-populated parts of Michigan, said Bryson of Oakland County.

“People expect to be able to get to work in rush hour on days when there's a massive snowstorm, in the same amount of time that they can in the middle of summer,” he said. “And if they can’t, we hear about it.”