The Detroit River is dramatically cleaner than in decades past. But contamination still lingers in the sediment, prompting warnings that anglers should ration their meals of fish from the river. (Bridge photo by Kelly House)
December 20, 2021
Kelly House (Email)
Michigan Environment Watch
Great Lakes, Upper Peninsula, Detroit, Great Lakes Collaborative

Bruce Yinger barely recognizes today’s Detroit River, its aquamarine depths teeming with perch, walleye and bass, as the lifeless waterway that carried the “dirty dishwater” of his youth.

Back then, anglers like Yinger, a Wyandotte resident and member of the Downriver Bass Association, knew they should head to the cleaner Canadian side if they hoped to land a fish. 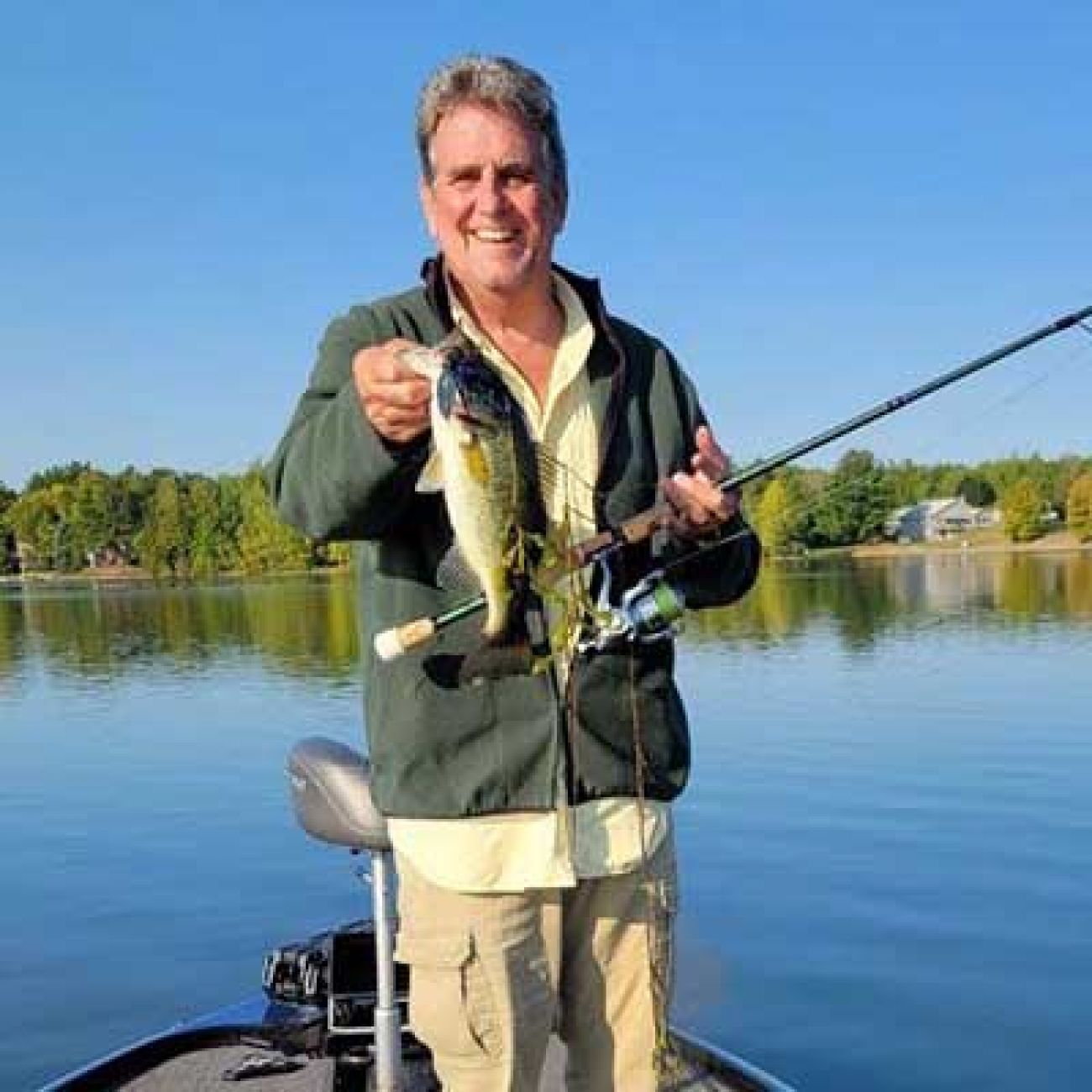 Boats came out of the water with a grimy chemical sheen around their hull. The fish tasted like motor oil.

It has taken decades of effort and tens of millions of taxpayer dollars to clean the mess that unregulated industry left behind. And still, the work isn’t done.

The water is cleaner, but contaminated sediment lines the riverbottom, making its way into the tissue of fish and resulting in warnings for humans to limit their meals from the river.

Now, thanks to a billion-dollar funding boost for Great Lakes restoration efforts contained in the $1.2 trillion federal infrastructure package, advocates say that those problems, too, could soon be rectified.

Federal officials are considering how to spend the $1 billion windfall dedicated to the Great Lakes Restoration Initiative.

It has funded projects in all eight Great Lakes states, plus Kentucky and Canada.

Cleaning contaminated sites like the Detroit River, Saginaw Bay, Torch Lake near Houghton in the Upper Peninsula, and dozens of others across the region is a top priority, said Chris Korleski, director of U.S. Environmental Protection Agency’s Great Lakes Office. 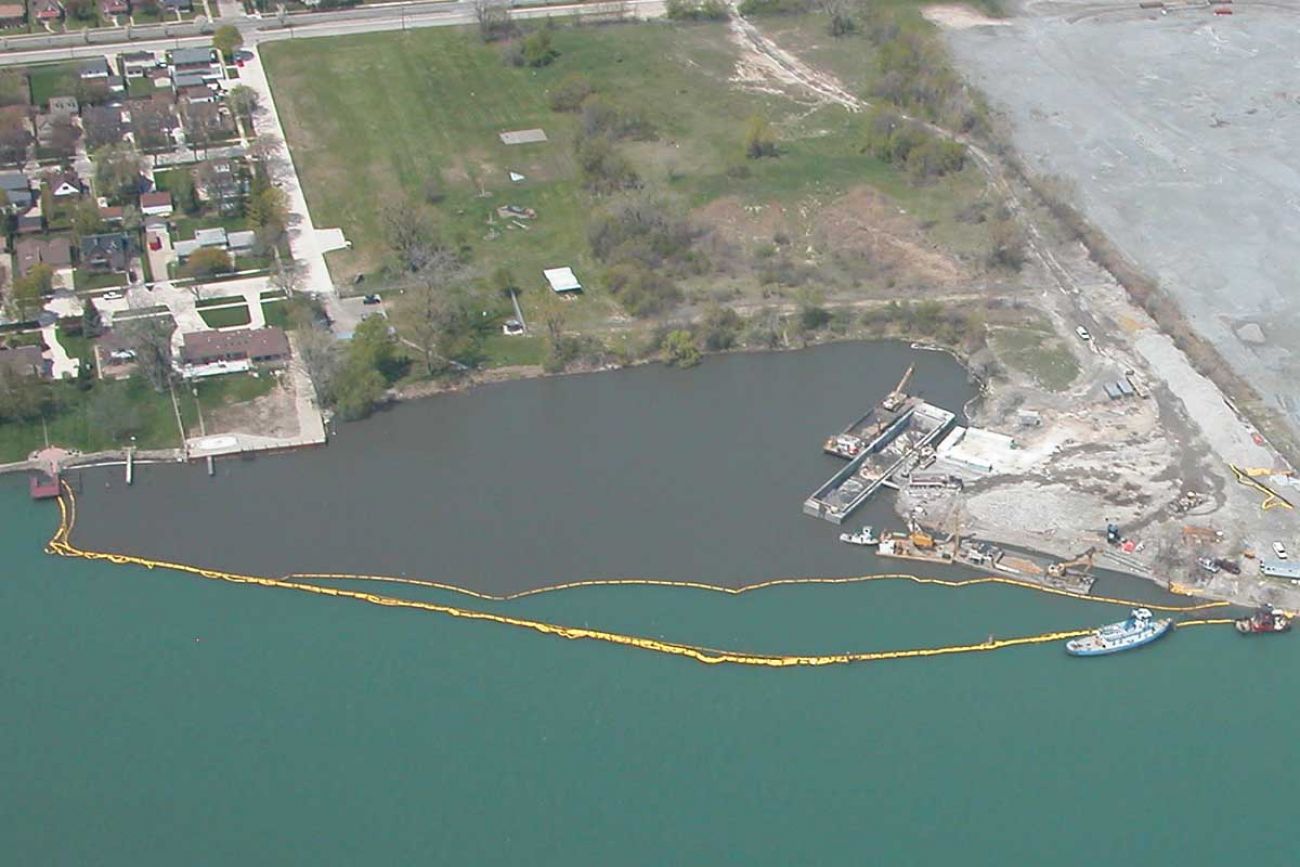 News of the funding fortune came as a relief to Great Lakes advocates and officials, who in recent years had been fighting repeated Trump administration plans that would have slashed the Great Lakes Restoration Initiative’s then-$300 million budget by 90 percent. Those proposals failed to make it through Congress, where the initiative has strong bipartisan support.

Now, it will be flush with more cash than ever before. In addition to the billion-dollar infrastructure boost, Congress has authorized five years of escalating annual funding: up to $375 million this year and up to $475 million by 2026.

Those two pools of money prime the initiative to receive almost as much money over the next five years as it received in its entire first decade.

“I could only describe it as miraculous compared to what we were looking at a couple of years ago,” Korleski said.

The initiative, which the Obama administration launched in 2010, was seen as a solution to a longstanding problem: Landmark environmental laws in the 1970s tamped down on the destructive industrial practices that had harmed the Great Lakes.

But rebounds were going painfully slow.

In 1987, the United States and Canadian governments identified 43 of the region's most heavily-contaminated sites, including 14 in Michigan, calling them Great Lakes Areas of Concern. By 2010, only one had been cleaned up. 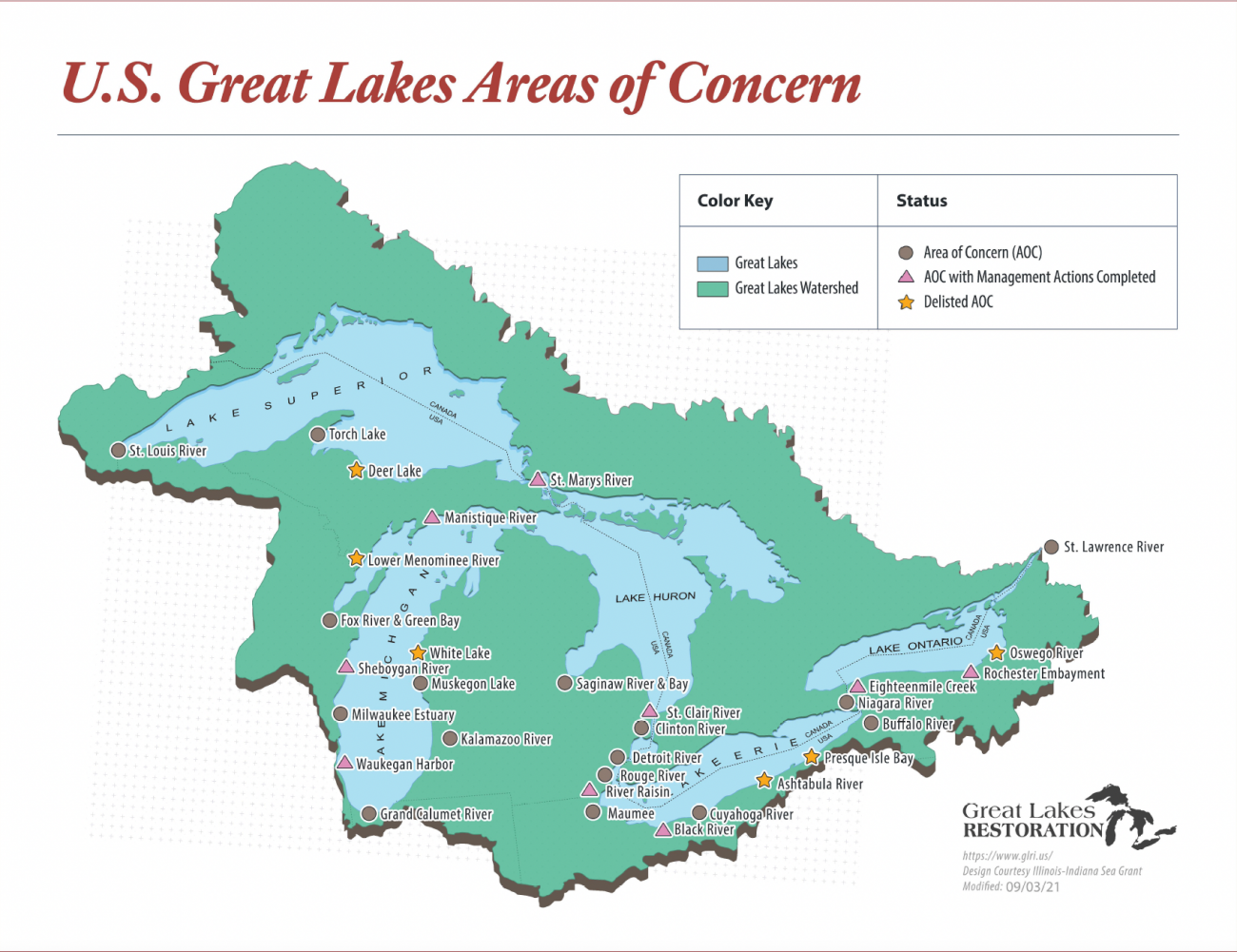 Of 43 Great Lakes Areas of Concern – contaminated sites across the region – several have been delisted following cleanup. (EPA map)

In the years since, the Great Lakes Restoration Initiative has received $3.8 billion to speed the process, and another five U.S. sites have left the areas of concern list. In addition to contaminated site cleanup, the initiative has supported projects to gird the lakes against invasive species, combat farm runoff, keep trash out of waterways and restore recreational access and fish and wildlife habitat.

Evidence of its work is visible across the state, from restored wetlands along Muskegon Lake, to sediment cleanup along the Detroit Riverwalk to the efforts to un-dam the Boardman River in Grand Traverse and Kalkaska counties.

Korleski anticipates the new money will make it possible to remove “the vast majority” of remaining contaminated sites from the areas of concern list, including Michigan’s Detroit River, Rouge River and others.

A call for smarter spending

As Great Lakes advocates consider how to spend the windfall, they’re also cognizant that it still falls far short of the region’s estimated need.

When Great Lakes stakeholders gathered in 2005 to set priorities for the Great Lakes, they identified a need of up to $20 billion across the region.

Given limited funding, said Joel Brammeier, president and CEO of the nonprofit water advocacy group Alliance for the Great Lakes, the EPA should first take a close look at what has worked — and what hasn’t.

“Is it time to actually refresh and reframe how we think about Great Lakes restoration?” Brammeier said.

While sites like the Detroit River have shown clear improvement, Lake Erie’s massive summer algae blooms have persisted despite billions of dollars thrown at the problem from multiple federal funding pools, including the restoration initiative.

Some of that funding has gone out as subsidies for farmers who agree to adopt watershed-friendly practices such as no-till farming and cover crops. Success is measured by how many farms participate, rather than whether the incentive programs are actually reducing pollution.

“Our coalition has really advocated to tie some of those voluntary measures to water quality standards,” Laura Rubin, director of the Healing Our Waters-Great Lakes Coalition, “instead of saying, you know, you installed this many buffers.”

And environmental justice advocates want the agency to make sure it prioritizes action in communities of color that continue to suffer from disproportionate exposure to pollution.

“There's a real opportunity for us to use these resources in a way that deals with the critical disinvestment in black communities and brown communities and indigenous communities,” said Jamesa Johnson-Greer, executive director of the Michigan Environmental Justice Coalition.

EPA officials say their planned focus on contaminated sites is an environmental justice win — one that could result in a fully-remediated Detroit River within the next decade.

Redlining and economic inequality pushed minority and poor communities into industrial areas where they’re exposed to more pollution than their whiter, wealthier neighbors. Thus, those minority communities would directly benefit from cleaning up pollution.

And cleanup can be a key component of regional economic development: A 2018 University of Michigan study concluded that every dollar of federal spending through the initiative produces a threefold benefit in the form of economic activity.

Advocates are pushing the EPA to make sure that frontline communities also have jobs on the cleanup crews, input on cleanup plans and ample public access to the newly-pristine waterways in their backyards.

If the government prioritizes the work smartly, it could accomplish multiple goals at once, said Susan Rusinowski, stormwater engineering manager for the nonprofit Detroit Future City.

For example, transforming vacant lots into wetland parks that store rainfall would alleviate both the sewer overflows that plague the Detroit River, the flooded basements that plague metro Detroit residents, she said.

“If we can improve Detroiters’ health, the Detroit economy and the Great Lakes by being really intentional about how this money is spent ...that would be ideal,” ” Rusinowski said.

But while $1 billion is a huge number, it still isn’t enough to get every contaminated site off the list. The EPA estimates that would take as much as $2 billion.

And the list is only a partial accounting of the region’s legacy industrial pollution: There are plenty of contaminated sites that never made the cut.

Yinger, the Wyandotte bass fisherman, said he is aware of the uphill battle ahead. But for the first time, he said, he can imagine a future in which “Downriver” isn’t a dirty word.

Beyond cleaning up the contaminated sediment, he said, he hopes some of the new money can be spent on parks and boat launches, so taxpayers can more easily enjoy the river their dollars are helping to revive.

“If people can physically see what we're talking about, it would help,” he said. “I take my own grandkids out there to show them, just so at least they know it’s there.”

Editor's note: This story was corrected on Dec. 27, 2021 to clarify that the federal government had previously given Michigan $3.8 billion to clean up heavily contaminated areas of the Great Lakes, not $3.8 million.