Michigan Democrats could be more competitive in state Senate races in 2022 if the latest draft boundaries proposed by a nonpartisan redistricting commission are approved.

A Bridge Michigan analysis of the proposed districts, using precinct-level data from the 2016 and 2020 presidential elections, shows the maps give Democrats a better chance to win one or two more seats — pushing the “blue line” farther north than it’s been in years.

Michigan’s non-partisan redistricting committee has created a proposed set of Senate boundaries that may give Democrats an opportunity to narrow — but not eliminate — the Republican advantage. Use the map to see how each new district voted in the 2016 and 2020 presidential elections.

The new districts, which are weeks from being adopted, would make the Democrats more competitive in the Bay County-Midland County area, in the Lansing area and in Kent and Ottawa counties.

In the next election, in 2022, the districts would favor Republicans 20-18, if votes split the way they did in the 2020 election between former President Donald Trump, a Republican, and now-President Joe Biden, a Democrat.

Republicans would have a 21-17 advantage if votes split the same way as Trump’s 2016 victory in Michigan.

But two of the new Republican-leaning districts are almost evenly split, with Trump voters leading Biden voters by less than 1 percentage point, which could essentially make them toss-ups.

Bridge Michigan compiled the analysis by applying precinct-level results of the last two presidential elections to each Senate district, each of which has between 252,000 and 272,000 people.

New boundaries favor GOP, but give hope to Democrats

In 2018, Republicans won 22 of 38 state Senate seats (below). Those victories may be harder to hold onto if the results of the past two presidential elections are reflected in the new districts.

Here’s the map of the existing districts and which party won in 2018 (two GOP seats are currently vacant). 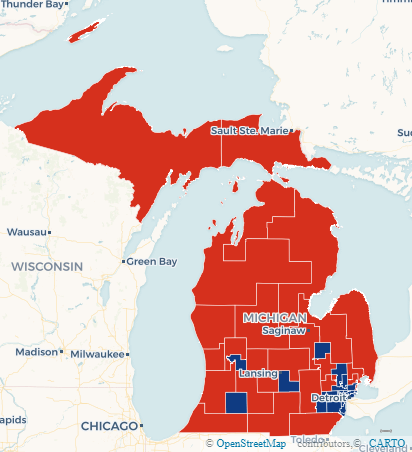 Here’s the map of the new Senate districts but with the winning presidential party from 2016. Note: The commission drew maps with the boundaries extending into the state’s borders in the Great Lakes. 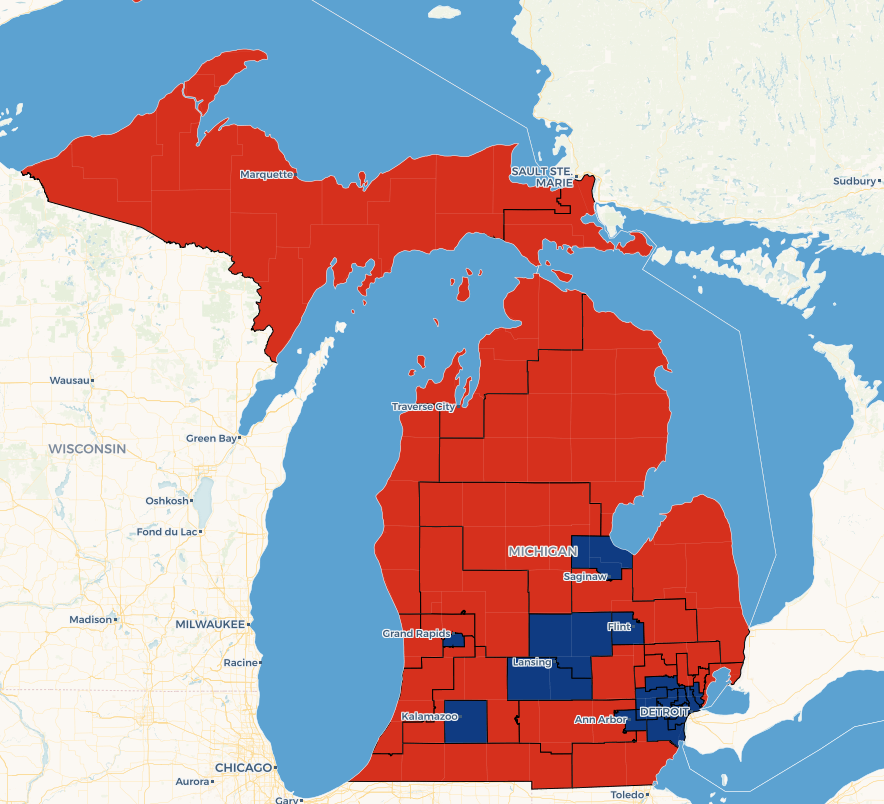 And here’s the same map with the residents from the winning presidential party from 2020. In both maps, Democrats have more districts leaning their way than were won in 2018. 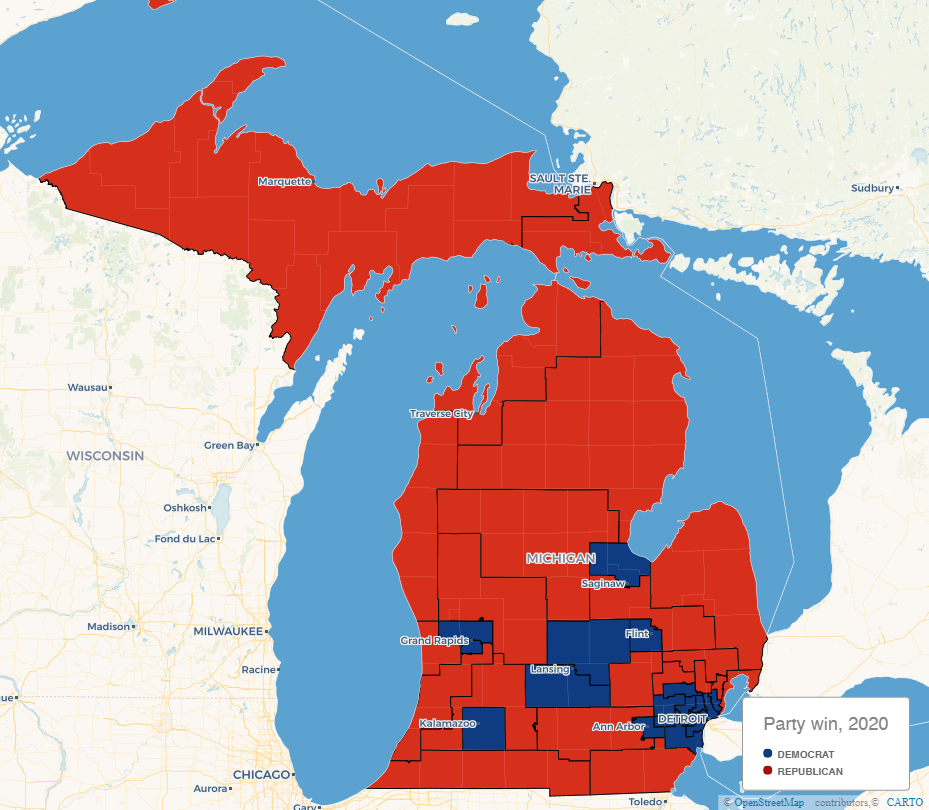 The maps underscore the stark and entrenched political divisions across the state: Democrats tend to be clustered in metro Detroit and other urban areas, while Republicans dominate rural Michigan and most of the state’s land mass, particularly in the Thumb and northern Michigan.

That makes it nearly impossible to create politically even districts without resorting to narrow, “funny looking” districts linking urban areas with rural ones, said Dave Dulio, a professor of political science at Oakland University.

“You’re not going to please everyone with this,” added Adrian Hemond, a Democratic political consultant and CEO of Grassroots Midwest.

Michigan’s old system allowed the party in charge in the Legislature to draw districts every 10 years after the release of U.S. Census Bureau population counts.

Crafted in secret, the process led to some of the worst gerrymandering in the nation — and allowed Republicans to keep control of the Legislature despite getting fewer total votes statewide than Democrats.

Anger against those maps helped prompt a 2018 initiative that changed the Michigan Constitution to create a nonpartisan commission to draw the districts.

“If people are expecting (an equal number of Republican and Democratic leaning districts), they shouldn’t because that is not what they’re supposed to do,” Dulio said.

No doubt, the draft Senate maps began generating complaints not long after the redistricting commission released them Wednesday

Some Midland residents are upset the county was split between Senate districts; residents in Shiawassee County wondered why they were in a district with East Lansing.

“We’ve seen some complaints about the districts that have very little to do with partisanship,” said Hemond, the Democratic strategist.

Many of the complaints centered on the combination of districts in which communities appear to have little in common.

But those changes could have big partisan implications.

All of Midland County is now represented by Sen. Jim Stamas, a Republican. The new map takes the eastern part of the county, including the city of Midland, in a separate district that leans Democratic and includes Bay County.

The old maps were more likely to keep districts within county boundaries,  a priority that is no longer being followed.

Here’s a look at major changes:

West Michigan: Growing counties of Kent and Ottawa would be split into several districts, with two Democratic-leaning districts when before there was just one.

Since the 2014 election, Ottawa County has been one Senate district, represented consistently by a Republican, currently Roger Victory.

The redraw would take the northeast quarter of the county and combine it with Grand Rapids and central Kent County. Biden won that area by nearly 3 percentage points; Trump had won it in 2016 by 8 points.

Oakland County: The state’s second-largest county would have five Democratic-leaning districts, including four that would stretch into parts of Wayne, Macomb and Washtenaw counties.

But Pontiac, a Democratic stronghold and now part of Democrat Rosemary Bayer’s 12th District, would become part of a Republican-leaning district with Auburn Hills, Waterford Township and other suburbs. Trump carried the area by 6 percentage points in 2016 and by 1 point in 2020.

Macomb County: The southeast Michigan county that has moved Republican over the last several elections, would have parts of two Democratic districts, up from one currently.

But both would include voters in Wayne County and one with voters in both Wayne and Oakland counties.

Detroit: Because of population losses, the city is in for wholesale changes. Though the city is still in parts of five districts, the proposed maps have more compact districts rather than odd-shaped jigsaw pieces that stretched to the suburbs with the old maps.

No one should make any decisions based on the new maps, though, Hemond cautioned.

“They’re going to change a lot,” he said.

Dulio said the maps and the complaints point out the difficulty in making them in the first place.

“Everyone is finding out how hard of a job this is,” he said. “It’s not an easy thing to do.”