Republicans now control the Senate 20-16 with two vacant seats that favor the GOP.

According to the group’s analysis of the past 13 state elections, two of three maps under consideration would give Democrats a 20-18 edge, while the third draw would result in a 19-19 split.

An analysis from Bridge Michigan, using the 2020 presidential election results, finds that two drafts would give Republicans a slight edge, 20-18.

Either way, the proposed maps result in a newfound competitiveness of districts that federal judges had called among the most gerrymandered in the nation.

For decades, the party in power at the state legislature drew the legislative and congressional districts — leading to maps significantly favored Republicans. They have controlled the Senate since the early 1980s.

That changed in 2018, when state voters approved a constitutional amendment that created the bipartisan 13-member citizens panel to redraw districts after the decennial census.

The group has been tweaking the drafts for the last few weeks, balancing the protection of minority voters, communities of interest, and federal law.

The maps approved Monday will likely change before a final vote on Dec. 31. The commission is allowing the public to weigh in on the drafts during public hearings in Detroit (Oct. 20), Lansing (Oct. 21), Grand Rapids (Oct. 22), Gaylord (Oct. 25), and Flint (Oct. 26).

The commission has decided to rename the maps using native Michigan trees for the sake of clarity. Bridge Michigan will refer to them as such.

Bridge Michigan analyzed the maps. Here’s what we found:

But this proposal would group all three cities in one Senate district.

According to the commission’s partisan fairness analysis, this map would give each party 19 seats.

However, Bridge Michigan’s analysis of the 2020 election results show that this map could lean Republican, with a 20-18 split. However, two Republican-leaning districts have a margin of less than 1,000 votes.

Depending on the metric you use, this map could either be a toss up, or benefit Democrats.

According to Bridge Michigan’s analysis, this proposal would give each party 19 Senate seats. However, it has three districts — two Republicans, and one Democratic — where the margin of votes is less than 1,000.

Meanwhile, the commission’s analysis concludes that this map would flip the chamber to majority Democratic, with 20 seats.

This map is an example of how data can provide different results.

The commission used a composite score statewide and federal election results dating to 2012.

Based on that composite score, this proposal would give Democrats a 20-18 majority in the Senate.

However, based solely on the 2020 election results, Democrats would pick two seats but would only have a total of 18 seats, while Republicans would keep control of the upper chamber with 20 seats. 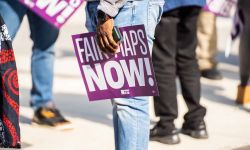 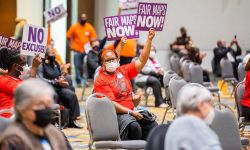