Whitmer, who first won election in 2018 on a pledge to "fix the damn roads," said the four-year, $3.5 billion bond borrowing program she launched in 2020 has led to "important and sweeping" upgrades to the state's aging infrastructure.

But "we've yet to address the long-term funding issues, so perhaps (tolling) is a part of the long-term solution," the governor told reporters ahead of her annual State of the State address planned for Wednesday.

Whitmer's comments come on the heels of a toll road feasibility and implementation study projecting Michigan could generate about $1 billion a year in new revenue by charging 6 cents per mile toll on 14 major highways, including large portions of Interstates 75, 94 and 96.

An all-electronic tolling program would essentially function as a mileage-based tax, which could either replace or add to traditional fuel taxes and registration fees the state currently charges.

Converting the highways to toll roads could prove controversial, and it would require an “innovative approach” because of federal rules, industry consultants concluded in a draft study first reported last week by Bridge Michigan.

But resulting revenue could offset projected declines in traditional gas taxes from electric and fuel-efficient vehicles as part of a “long-term, financially stable transportation program,” consultants wrote in a report prepared for the Michigan Department of Transportation.

The Michigan Legislature, controlled by Republicans at the time, commissioned the toll road research in 2020. The reports now head to a Democratic-controlled Legislature, where lawmakers say they are ready to explore new ways to fund road repairs across the state.

Whitmer said Tuesday that she was still working her way through the tolling research but thinks "it's worth starting to understand everything that the study concluded, and then working to see how that would fit into a larger plan that is sustainable, that recognizes how the industry is changing and how our outdated system of funding roads needs to be addressed."

Whitmer proposed a 45-cent fuel tax increase in 2019, but the Legislature rejected the proposal, and the governor has said she does not intend to seek another fuel tax hike.

Industry consultants estimate the state could launch an all-electronic tolling program by 2028 and expand it over more than a decade. The report anticipates tolls starting on parts of Interstate 94 and expanding five years later on all or parts of I-69, I-75, I-196, I-275, I-696 and M-14.

Within 14 years, 1,156 miles of freeways statewide could be converted to tolls, according to the study. 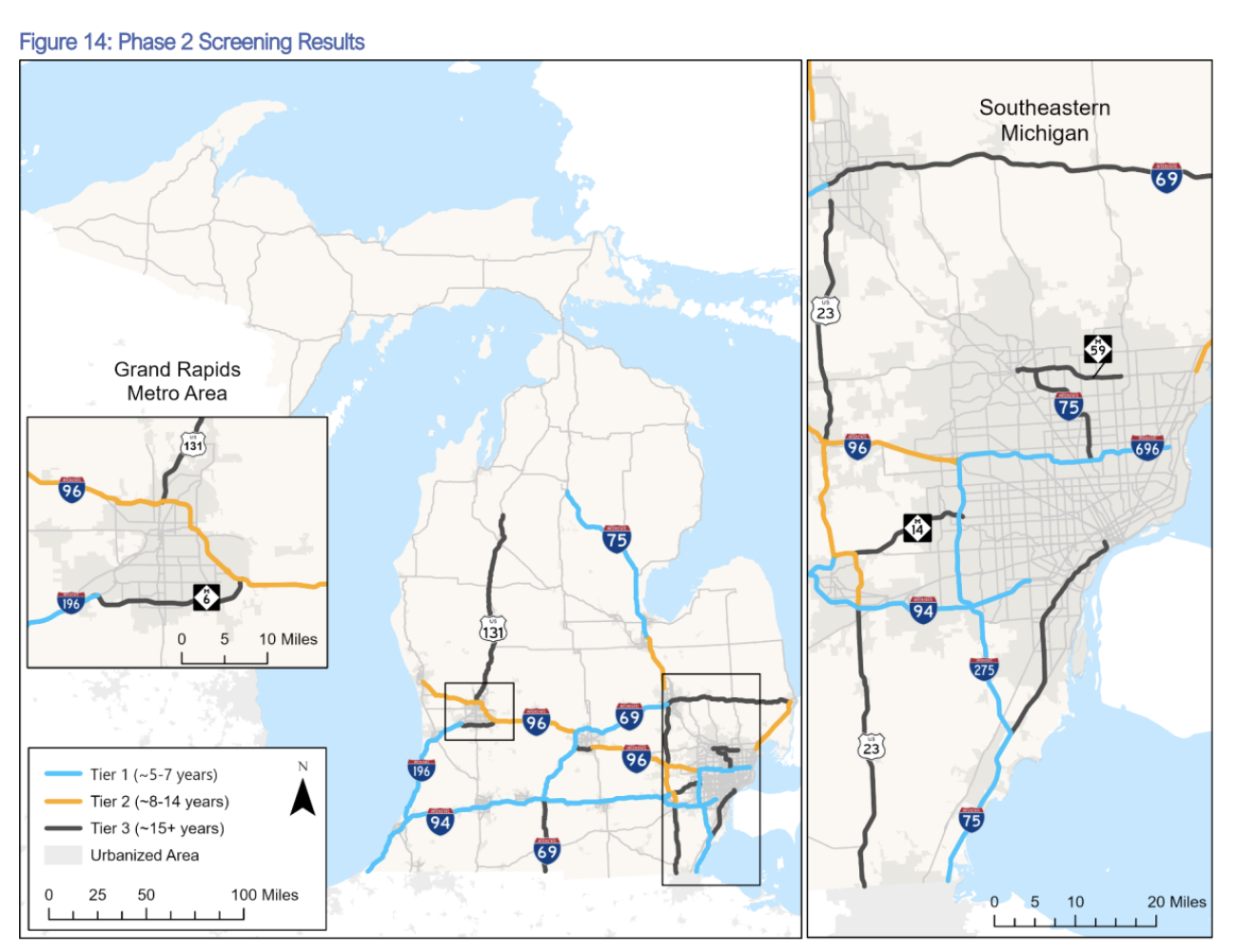 Michigan could convert nearly 1,200 miles of highway into toll roads, as seen here, according to a new study. (Michigan Department of Transportation report by HNTB)

Whitmer has been skeptical of tolling in the past, saying in 2019 that charging motorists here could have a "downside" because Michigan is a "destination state" rather than a "pass through" state like Ohio, which is in a better position to collect revenue for "out of staters."

But the governor took a new tone Tuesday, telling reporters "there's a possibility" tolling "might make sense on certain arteries and not others." She noted her staff is still studying the feasibility and implementation studies.

Republicans haven't ruled out the possibility.

State Rep. Pat Outman, GOP vice chair of the House Transportation Committee, said last week the state must be "innovative in our approach" to road funding" but cautioned against burdening residents already facing “the challenges of inflation."

Democratic committee chairs in the House and Senate told Bridge they could invite authors of the tolling studies to present their findings in public forums later this year.

Tolling is "going to be a hot topic for us here," said state Rep. Nate Shannon, a Sterling Heights Democrat who chairs the new House Transportation, Mobility and Infrastructure Committee.

Shannon said Tuesday he has not yet read the full toll road reports but will "definitely be doing my homework" on the topic. Tolls are just one example of the "big ideas" lawmakers may discuss this year as they consider new approaches to long-term road funding, he said.

"We have to look to the future," Shannon told Bridge. "We might be 10, 15, 20 years out from having very few internal combustion engines, so it's going to be important."

Michigan currently generates about $1.5 billion in annual fuel tax revenue to help fund road repairs. But because of electric vehicles, the tolling study consultants project the state will lose $200 million a year in anticipated revenue by 2030 and $500 million to $1 billion by 2040.

A separate study by the Anderson Economic Group of East Lansing concluded that electric vehicles could cost the state closer to $500 million by 2030.

Michigan, like 30 other states, has so far responded by imposing new fees on electric and plug-in hybrid vehicles. For 2022, motorists will have to pay between $50 and $140 extra, depending on vehicle type.

EV advocates argue those surcharges are too high because owners already pay higher annual registration fees since their cars cost more to begin with.

With electric vehicle adoption projected to increase in coming years, states across the country are exploring the possibility of toll roads or a vehicle miles driven tax, such as so-far voluntary programs in Oregon, Utah and Virginia.