LANSING — Voters chose Gretchen Whitmer to lead Michigan another four years, re-electing the Democratic governor who guided the state through the COVID-19 pandemic and vowed to fight "like hell" for abortion rights.

With most of Michigan’s largest population centers reporting results early Wednesday, the Associated Press called the race for Whitmer at 1:21 a.m.

The first-term Democrat had established an insurmountable lead over Republican Tudor Dixon, a political newcomer who was severely outspent but made the race competitive by tapping into voter frustration with inflation and violent crime.

Michigan Democratic Party Chair Lavora Barnes celebrated Whitmer’s victory as a chance for the governor to "build on the progress of her first term and uplift Michigan for four more years."

Speaking at 8 a.m., Whitmer pledged to continue her platform with the help of fellow Democrats, who won control of the state House and Senate during Tuesday voting.

"We'll keep fighting to repeal the retirement tax so seniors can keep more of what they've earned. We will protect the Great Lakes for generations and ensure that every Michigander can pursue their potential from preschool to post secondary. And we'll keep fighting like hell to protect fundamental rights, as they've continued to be under assault across the nation. We made huge strides yesterday, but that's important to continue as well."

President Joe Biden called Whitmer to congratulate her, according to a White House pool report.

But partial returns looked very good for Whitmer and other statewide Democratic candidates, who appeared to benefit from a strong voter turnout in support of abortion rights Proposal 3.

As of 6 a.m., Whitmer led Dixon 53 percent to 46 percent with more than 85 percent of all ballots counted, according to unofficial results compiled by The Associated Press.

Whitmer was dominating Detroit, as expected. But she was also building on her 2018 wins in vote-rich suburban areas that broke from the Republican Party under former President Donald Trump, who endorsed Dixon for governor.

In Oakland County, the state's second-largest, Whitmer was leading in partial returns by 22 percentage points, up from 17 points four years earlier. And in west Michigan's Kent County, where Whitmer won by 4 points in 2018, the governor was leading by 7 points on Tuesday night.

Dixon was faring well in smaller rural areas and was still hoping for a strong surge in Macomb County. She was leading the state’s third-largest county by about 7 points, but only 15 percent of precincts had been fully reported.

Late Tuesday, Dixon told supporters they should not trust a Fox News projection that Whitmer had won re-election.

"This race is going to be too close to call despite what Fox thinks," Dixon said at an Election Night party in Grand Rapids that ended shortly before midnight.

"We look forward to the full results tomorrow,” she said. “We're going to make sure we count every vote. As soon as we have results, you will hear from me." 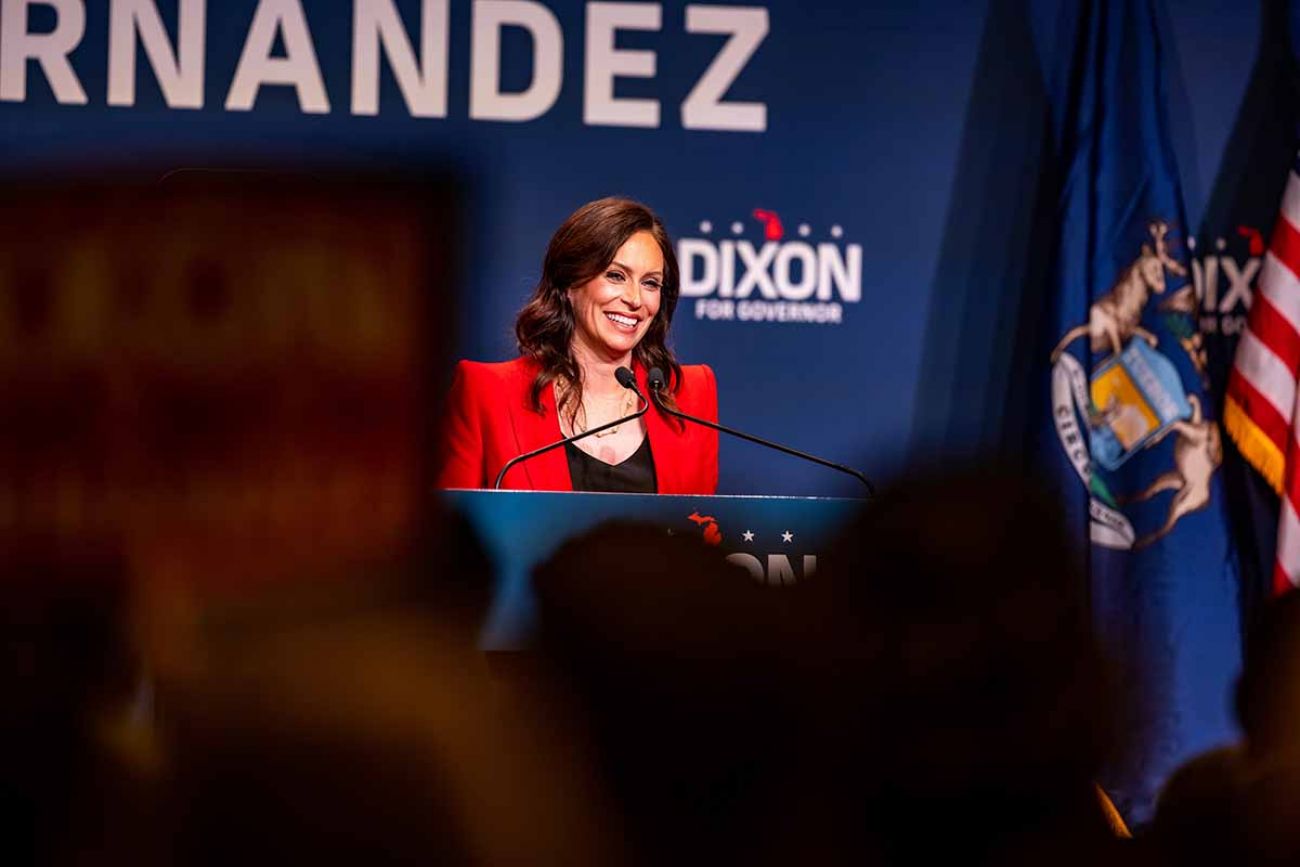 Whitmer said her campaign was also waiting on final numbers but was encouraged by reports of high voter turnout. "I never thought I'd be so happy about Fox News, but I'm glad they called this election too," she joked.

The governor’s race headlines a critical midterm election that will also decide the partisan makeup of Congress, control of the state Legislature and ballot proposals to enshrine abortion and voting rights in the Michigan Constitution.

The gubernatorial contest pitted a political veteran in Whitmer against Dixon, who has never held elected office and worked as a host on a conservative streaming television network before deciding to run for governor last year. 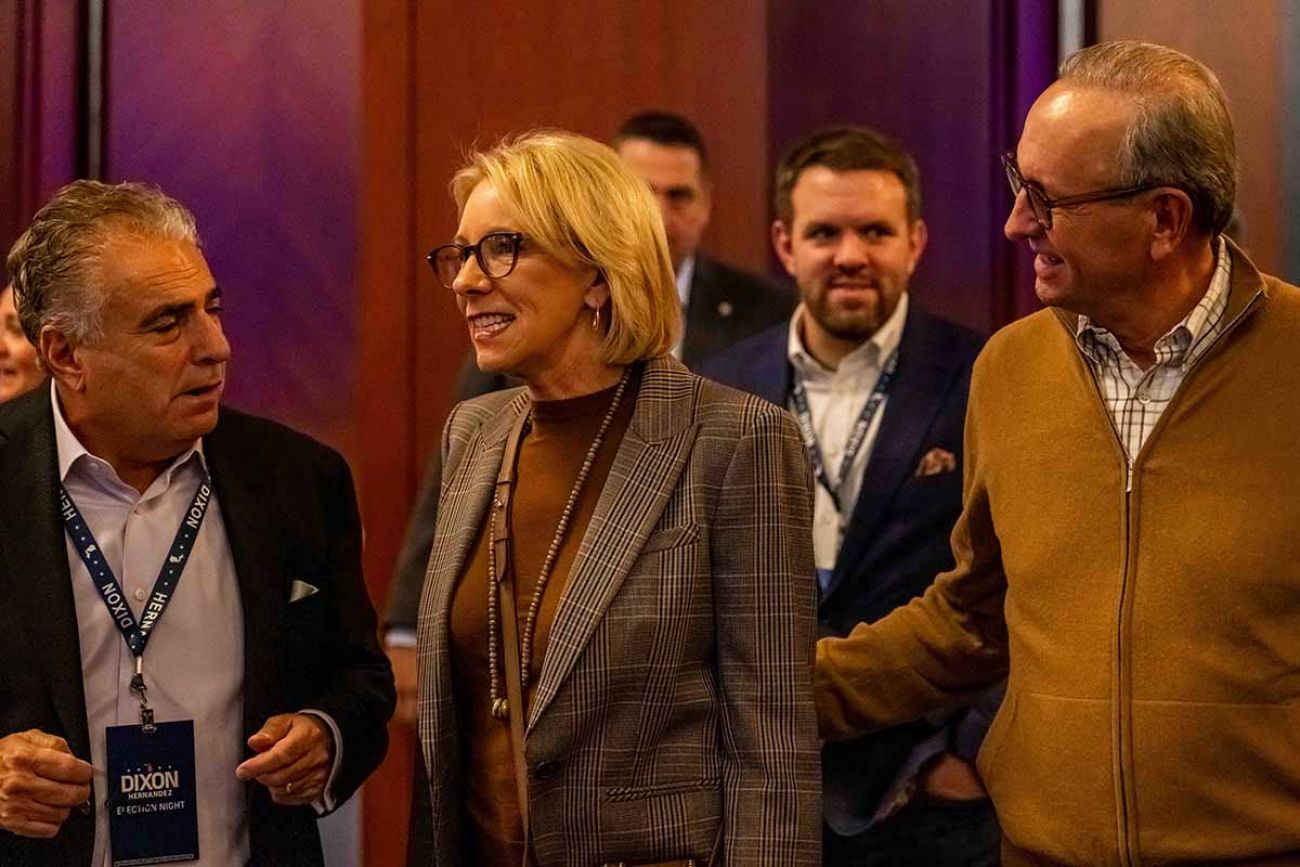 Betsy and Dick DeVos at the Tudor Dixon election night at the JW Marriott in downtown Grand Rapids, Michigan on November 8, 2022. (Bridge photo by Brett Farmer)

Whitmer’s public safety orders early in COVID-19 made her a hero to some but a villain to others, including militia members who plotted to kidnap the governor but were thwarted by the FBI and later convicted of domestic terrorism charges.

Whitmer "took COVID seriously" and "gave it the gravity it deserved," said Liam Singleton, 27, a sales consultant from Grand Ledge.

"She's a strong woman,” Singleton told Bridge Michigan, crediting Whitmer with protecting public health despite the “pressure” to scrap pandemic restrictions.  “She stood up when a lot of people would've backed down, and I respect her for that.”

But Judy Rankin, an 81-year-old retiree who voted minutes later in Grand Ledge, said Whitmer’s lockdown order went too far and motivated her to vote for Dixon.

"I don't feel it was handled in the best interest of the people who live in Michigan," Rankin said, describing herself as a former Democrat who has voted Republican since backing Donald Trump in 2016.

"Look at the businesses that we’ve lost," Rankin said. "I’ve seen people struggling. And I know a lot of small business owners that had to lose their business who had worked hard all their lives."

Candidates whose party controls the White House – Democrats this year under President Joe Biden – typically do poorly in midterm elections. But an incumbent Michigan governor has not lost re-election since the state implemented a two-term limit in 1992.

Dixon attempted to make the election a referendum on Whitmer’s tenure. She has lambasted the governor’s COVID-19 orders as overly restrictive and vowed to further cut regulations on Michigan businesses to spur job growth.

In her re-election campaign, Whitmer worked to frame herself as a pragmatic leader who guided the state through a series of crises in her first term, including the global pandemic, historic floods in Midland and social justice protests.

Whitmer also made abortion rights a key plank of her reelection campaign, after the U.S. Supreme Court in June reversed Roe v. Wade.

Earlier this year, the Democratic incumbent successfully sued to block enforcement of a 1931 ban amid an ongoing legal fight over the law, which would make it a felony crime for physicians to perform an abortion. 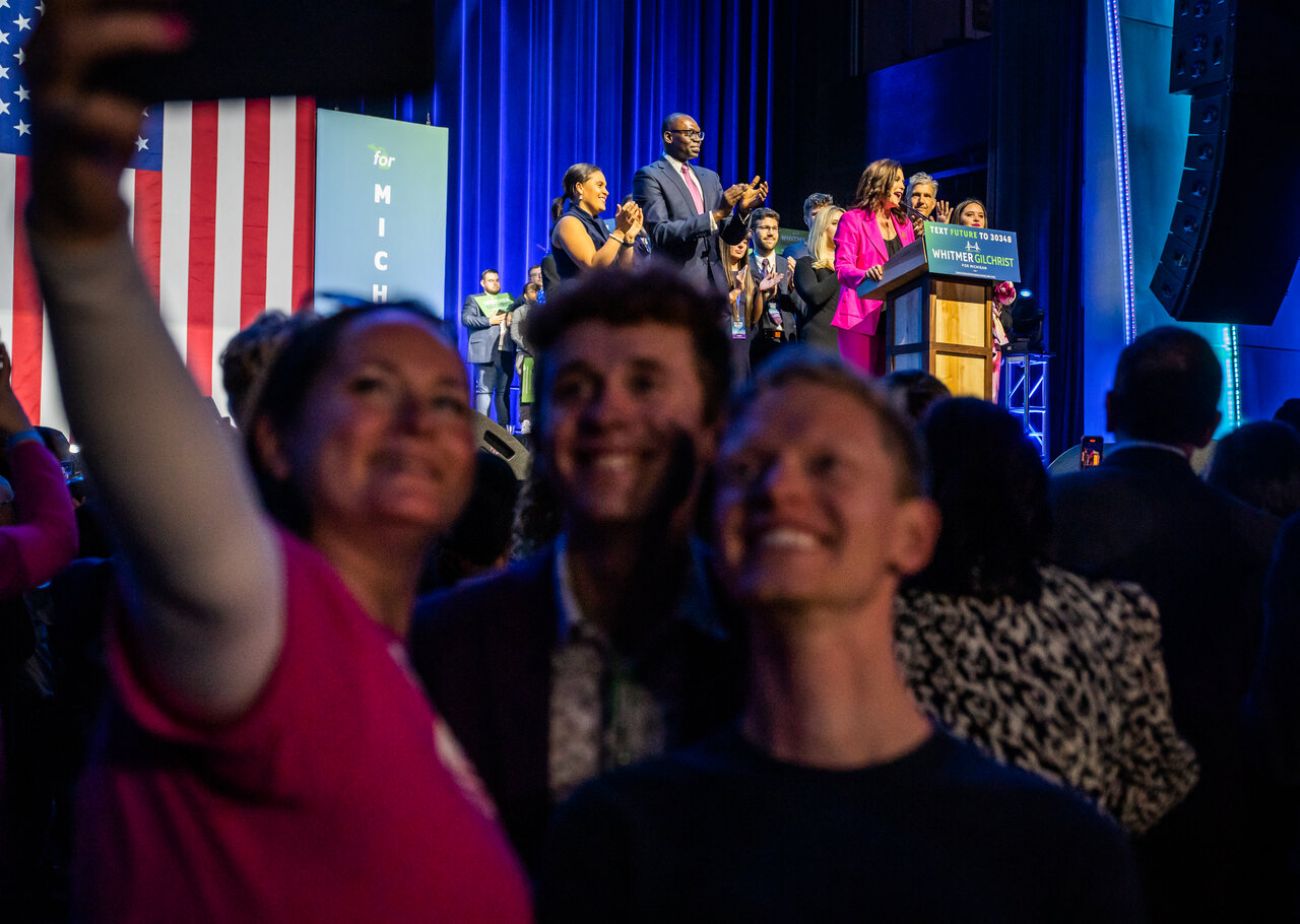 Gov. Gretchen Whitmer greets supporters early Wednesday from the MotorCity Casino in Detroit. Shortly after the speech, she was declared the winner of her race against Republican Tudor Dixon. (Bridge photo by Valaurian Waller)

Whitmer’s support for legal abortion — and Dixon’s opposition even in cases of rape or incest — was a deciding factor for Sidney Cohen, a 20-year-old student at Michigan State University who was waiting in line on campus to change her registration to vote in East Lansing.

“As a woman, I think we should be able to choose what we want with our own body,” Cohen said. “Usually I wouldn’t vote in an election like this — I’d just vote in a presidential election — but this is definitely getting us out to vote, because it’s something that’s very important to us.”

But other voters — like Dan Drenner of Lambertville in southeast Michigan – said they voted for Dixon out of frustration with Whitmer.

Drenner, an estimator for a compressor company, said he’s lost about $200,000 the past two years in his 401K and other investments — a loss he places squarely at the feet of President Biden and Whitmer.

Gas is nearing $4 a gallon again, and the local Kroger has raised its prices, too. Sometimes, the store runs short of meat; other times, cashiers, he told Bridge.