Chatfield's hiring sparked an outcry in the Kalamazoo area, where critics argued the Levering Republican's public opposition to expanding anti-discrimination protections to gay and transgender workers conflicted with the economic development group’s goal of fostering a local environment for job growth.

While Chatfield told Bridge Michigan last week he would support LGBTQ rights in his new role, he could not escape his political past. The City of Kalamazoo voted to sever ties with Southwest Michigan First, and nonprofits including the Kalamazoo Promise and the Community Foundation quickly followed suit.

In a Monday resignation letter to the Southwest Michigan First board of directors, an apologetic Chatfield acknowledged that "the arrival of my family and me to the Kalamazoo area has caused some unfortunate controversy, and for that I am truly sorry."

In his letter, Chatfield admitted he was "walking a fine line" in trying to balance his new professional obligations with personal convictions.

"As a Christian, I believe in the Bible," Chatfield wrote. "I don't want to hide from that... I don't want to feel I have to be quiet about that within this community so I could collect a paycheck. That's not right to anybody."

"I can't truthfully apologize for various conservative beliefs I espoused while in office, and I don't think you want that,” he added. “But many of my political opinions were causing an uproar. That much was obvious."

Southwest Michigan First issued a statement Monday morning after accepting Chatfield’s resignation, saying that many — including staff, board members and the community – registered “disappointment” with the hire.

Chatfield, who has no business development experience, got the job without a full vote of the group’s board. Southwest Michigan First now plans to add an executive-level staff position and board committee dedicated to diversity, equity and inclusion, as well as transparency on the next hire.

“Many have questioned our agency’s commitment to Diversity,Equity and Inclusion as well as our human capital and CEO search processes,” according to the statement. “We welcome the conversations, challenging questions and opportunities to listen, learn and grow. What is abundantly clear is that our search process fell well below the standard expected by our board, our community partners, investors, donors and importantly, our Southwest Michigan First team.”

Chatfield was one of former President Donald Trump's most vocal Michigan supporters in the 2020 campaign. He said he never intended for his hire to be a distraction and regrets any "hard feelings or stress" it caused in the Kalamazoo region.

"There's so much division in our country today, and it pains me to see my political past separate a welcoming community,” he wrote.

The drama over Chatfield’s hire points to the growing support for gay, lesbian and transgender rights within the business community. Advocates argue Michigan must create a more welcoming environment to recruit talented workers in high-demand fields.

A former Christian school teacher and soccer coach, Chatfield won election to the Michigan House, in part, because of his opposition to expanding LGBTQ rights. In 2014, he challenged – and defeated – an incumbent Republican who had introduced legislation to expand Michigan's Elliot-Larsen Civil Rights Act to protect against discrimination based on sexual orientation.

As he climbed to power in Lansing, Chatfield forged solid relationships with gay officials, as recently noted by Democratic Attorney General Dana Nessel, who is gay.

But Chatfield continued to publicly oppose efforts to add anti-discrimination protections to state law, arguing that it could lead to reverse discrimination against religious people and business owners.

Chatfield had scrubbed his Twitter account before beginning the new job, but critics who questioned his fit for the important community position unearthed several of his more provocative political comments, including one tweet in which he argued Democrats are “the party of KKK.”

Chatfield last week told Bridge that in his new job, he would support efforts to protect gay and transgender residents from discrimination, including a potential ballot initiative proposed by Fair and Equal Michigan.

"But it's not enough for our community or for Michigan," Knott said in a statement before his resignation, urging Chatfield to lead on the issue.

Southwest Michigan First is among several Michigan regional economic development entities that are publicly and privately funded to work on job attraction efforts.

The Michigan Economic Development Corporation calls the regional groups it works with “critical partners” for the state’s business growth, and MEDC spokesperson Otie McKinley said last week the state’s relationship with Southwest Michigan First would continue despite the Chatfield controversy.

Kitchens earned about $750,000 per year, according to tax filings. Neither the group nor Chatfield would disclose his pay, but he said it was not as much as Kitchens. 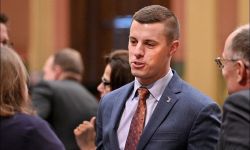