After years grappling with a shortage of emergency response workers, leaders in the Michigan ambulance industry are applauding a $12.9 million state funding increase they say should help close that gap.

“The pandemic and decades of underfunding pushed Michigan EMS agencies to the brink, and investment was long overdue,” said Jack Fisher, president of the Michigan Association of Ambulance Services, said in a statement.

“This budget increase will allow us to increase pay for paramedics and EMTs and recruit much-needed new staff into the profession.”

According to the group, there are now at least 1,000 full-time openings for paramedics and emergency medical technicians in ambulance services across Michigan. State records show there were 28,804 licensed EMS professionals as of August 2019.

Worker shortages have been an ongoing issue among large metropolitan ambulance response services, as well as tiny rural units.

In a remote pocket of the Upper Peninsula west of Marquette, Bay Ambulance Inc. normally counts on a staff of six paramedics to handle emergencies across 1,500 square miles. That’s now down to four paramedics ─ a loss that can add precious minutes to emergency response times.

“We’ve been in this situation for the past year-and-a-half and unable to fill those positions,” Bay Ambulance Director Gary Wadaga told Bridge Michigan in August. “We’ve got to get this fixed or we will get in big trouble.”

Wadaga told Bridge on Wednesday he’s hopeful the funding boost will trickle down to his agency.

“We’re excited. We think it’s going to benefit EMS agencies across Michigan. But it’s just the first step, because rural agencies don’t have the call volumes of larger agencies.”

And Wadaga said he’s still searching for paramedics to fill the staffing void.

“We’re still looking to hire two. No bites at this time,” he said.

The funding boost will go to the Medicaid fund, which pays for ambulance service for low-income clients, which along with Medicare accounts for about 60 percent of ambulance rides.

According to Michigan Association of Ambulance Services Executive Director Angela Madden, federal reimbursements for ambulance service under Medicaid typically pays from 10 percent to 25 percent of that cost, while Medicare pays about 30 percent.

Agencies rely on private insurance payments to make up the rest.

Emergency officials say the crisis has built for years and been exacerbated by the COVID-19 pandemic, as first responders and recruits are reluctant to work long, stressful shifts for relatively low pay.

“This has been going on for a long time,” Clark Imus, faculty coordinator for the EMS program at Kellogg Community College in Battle Creek, told Bridge.

“Now it’s at a point where people are burned out from the job and there’s not enough in the pipeline coming in. People can see they’d be making less money than you do if you’re flipping burgers at McDonalds.”

The job requires certification, which can cost $3,300 and requires 194 hours at Kellogg Community College. Paramedic training costs $11,000 in tuition at the college, along with coursework that can take nine to 15 months along with more than 1,000 hours of training.

Across the southern tier of Michigan, Emergent Health Partners provides emergency medical response for about 1 million residents in 14 counties.

It is short by roughly 85 first responders of a full staff of 375, which the company acknowledges has slowed response times in cities like Jackson and Ann Arbor and along rural stretches of St. Joseph and Branch counties.

Marc Breckenridge of Emergent Health told Bridge on Wednesday the industry is “relieved … to see the needle is finally moving toward more direct funding for EMS.” 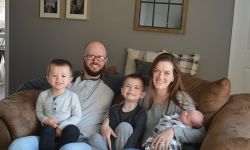