A Michigan judge has invalidated new rules intended to regulate the behavior of challengers and poll watchers at the Nov. 8 election, finding that Secretary of State Jocelyn Benson overstepped her authority.

Court of Claims Judge Brock Swartzle this week found that the Bureau of Elections, which is overseen by Benson, should have gone through the typical rule-making process — which includes public input — before rolling out instructions in a May 22 manual.

“An executive-branch department cannot do by instructional guidance what it must do by promulgated rule,” his Oct. 20 order reads.

Swartzle, who was a GOP-nominated Supreme Court candidate in 2020, ordered the Bureau of Elections to either rescind the manual in its entirety or revise it to comply with his decision.

The opinion was prompted by the Michigan Republican Party, the Republican National Committee and former election challengers, who opposed a host of new rules including bans on cell phones while overseeing absentee counting boards, communications restrictions and requirements that all challengers be credentialed by the Secretary of State.

Benson said she would appeal. Her spokesperson, Jake Rollow, said the new rules were an effort to “provide certainty to all voters, clerks, election workers and election challengers on how to maintain the peace and order at all voting locations.”

“In its role overseeing this complex and decentralized system statewide, the Michigan Bureau of Elections has always provided clear and detailed instruction for interaction among all participants to ensure legal compliance, transparency, and equal treatment of all voters,” Rollow continued.

The rules followed the 2020 presidential election, when Republican poll challengers in Detroit called activists to an absentee counting board in the middle of the night, causing dozens to swarm the building and attempt to enter it.

Poll workers covered windows for privacy, prompting conspiracy theories that workers in the predominantly Democratic city were hiding voter fraud. Multiple audits and investigations have found there was no widespread fraud in the presidential election.

Republican Kristina Karamo, who is challenging Benson on Nov. 8, called the ruling “a victory for voting rights and the rule of law.” Karamo rose to prominence within the party after claiming she witnessed fraud in Detroit while serving as an election challenger in 2020.

At an Oakland County media event, Karamo said the Bureau of Elections manual “was an attempt to suppress poll challengers from their lawful duty, their constitutionally protected rights to supervising the election process.”

Swartzle found aspects of the manual that were merely instructional could stand, but wrote in his opinion that the Bureau of Elections manual included additional restrictions not outlined in state law. 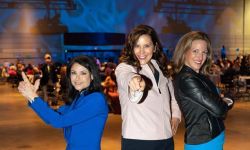