LANSING — A federal judge on Thursday ordered Sidney Powell, L. Linn Wood and other pro-Trump attorneys to pay more than $175,000 in legal defense costs resulting from their "frivolous" lawsuit that sought to overturn Michigan's 2020 presidential election.

U.S. District Court Judge Linda Parker, who sanctioned the attorneys in August, decided the monetary amount Thursday after considering legal costs submitted by the state of Michigan and city of Detroit.

The $21,964.75 awarded to Michigan and $153,285.62 awarded to Detroit is an "amount the court finds needed to deter (these attorneys) and others from engaging in similar misconduct in the future," Parker wrote.

In her 27-page opinion, Parker referenced a fundraising group established by Powell called Defending the Republic.

"Plaintiffs’ attorneys, many of whom seek donations from the public to fund lawsuits like this one... have the ability to pay this sanction," she wrote.

The award follows a blistering 110-page opinion from Parker that called the attorneys’ so-called “kraken” lawsuit a “historic and profound abuse of the judicial process.”

The suit sought to decertify President Joe Biden’s victory in Michigan or to void the state’s entire election. Parker, a Democratic appointee, rejected the attempt last December, calling it an “amalgamation of theories, conjecture, and speculation.”

Defenders of the lawyers had claimed that sanctioning them would set a dangerous precedent. 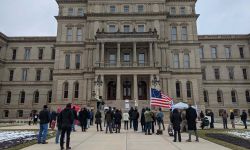