A one-judge grand jury had no power to issue indictments stemming from the Flint water crisis, the Michigan Supreme Court ruled Tuesday. The decision is likely to erase criminal charges against former Gov. Rick Snyder and several other former public officials, though one prosecutor indicated the cases are far from over.

Michigan law allows judges "to investigate, subpoena witnesses, and issue arrest warrants.” But it does "not authorize a judge to issue indictments,” which left the defendants with no recourse to initially hear and challenge the evidence in open court, the court said in a unanimous opinion, written by Chief Justice Bridget McCormack.

Flint water crisis defendants were entitled to preliminary exams where they could learn about the charges they face, challenge evidence and prepare a defense, the 6-0 majority wrote.

Michigan Attorney General Dana Nessel’s office "invoked obscure statutes … to deprive defendants of their statutory right to a preliminary examination,” Justice Richard Bernstein wrote in a concurring opinion. “...I do not believe we can tolerate such a procedural offense."

Justice Elizabeth Clement recused herself from the decision because she previously worked as Snyder’s chief legal counsel.

The ruling is a major blow to Nessel, a first-term Democrat who threw out earlier Flint water charges six months after taking office in 2019, when she relaunched the state’s criminal probe with Solicitor General Fadwa Hammoud and Wayne County Prosecutor Kym Worthy at the helm.

Hammoud and Worthy relied on indictments handed down by a one-judge jury to charge Snyder and eight others last year in connection with the Flint scandal.  At the time, Worthy defended the tactic as “the most expeditious and efficient way to proceed.”

Attorneys for Snyder said they will move “immediately” to dismiss charges against the former governor.

“We applaud today’s decision from the Michigan Supreme Court, which leaves no doubt about how Attorney General Dana Nessel’s office egregiously mishandled these cases from the beginning,” Snyder’s legal team said in a statement that also called the prosecution “self-interested, vindictive, wasteful, and politically motivated.”

In a statement Tuesday, Hammoud said prosecutors “still believe these charges can and will be proven in court...Our reading is that the Court’s opinion interprets the one-man grand jury process to require charges to be filed at the district court and include a preliminary examination. Our team is prepared to move forward through that process.”

Tuesday’s ruling stems in part from a challenge by former Snyder Health Director Nick Lyon, who argued a lower court should have dismissed the felony charges against him because a one-judge grand jury has no charging authority. Attorneys representing Lyon said Tuesday they now expect all Flint criminal defendants who haven’t already done so to file motions in the Genesee County Circuit Court to have their cases dismissed.

“I would expect everyone to jump on the bandwagon now,” said John Bursch, an attorney for Lyon.

Lyon issued his own statement Tuesday calling the ruling “a victory for public service in Michigan.”

“State employees should not be prosecuted or demonized for just doing their job,” Lyon said. “It is a great injustice to allow politicians — acting in their own interests — to sacrifice government servants who are performing their roles in good faith under difficult circumstances.”

Another Lyon attorney, Chip Chamberlain, told Bridge Michigan that Lyon’s legal team “couldn't be more pleased," about Tuesday’s ruling. Nessel "could choose to re-charge (Lyon)," he said, "but that would be their third try at this, and there's no basis."

Bursch questioned whether it would even be possible for prosecutors to re-charge Snyder and other misdemeanor defendants with the same crimes at this point, because Michigan has a six-year statute of limitations on most misdemeanors.

Snyder faces two misdemeanor counts of willful neglect of duty, while several of his officials face charges ranging from felonies to misdemeanors.

The Flint crisis was triggered by an April 2014 drinking water source switch, executed while a state-appointed emergency manager ran the city. The decision caused lead contamination that coincided with two outbreaks of Legionnaires’ disease and 12 deaths.

The Snyder-appointed emergency manager approved the switch as a cost-cutting measure, without requiring anti-corrosion chemicals to keep lead from leaching out of pipes. As residents began to complain of murky and fetid water, state officials continued to say their water was safe for more than a year before Snyder declared a state of emergency in early 2016.

Snyder was charged with two misdemeanors for willful neglect of duty, relatively minor counts punishable by up to one-year behind bars and/or a $1,000 fine. Lyon faced the most serious charges: Nine counts of involuntary manslaughter, each a 15-year felony.

Shortly after Nessel announced new charges in January 2021, lawyers for the defendants began questioning the prosecution’s use of the unusual and secretive one-man grand jury. The tactic differs from a traditional criminal case, in which prosecutors issue charges, and defendants can publicly challenge the evidence against them in a preliminary exam that helps determine whether the case goes to trial.

“This is a big victory for due process,” said Anastase Markou, an attorney for top Snyder aide Richard Baird, who faced multiple felonies. Justices on Tuesday ruled that Baird and Nancy Peeler, a state health official, were entitled to a preliminary examination after they were indicted, though Markou said the ruling will ultimately result in dismissals for both.

Markou noted that Tuesday’s opinion reaches far beyond the Flint cases by banning the use of one-person jury indictments in any Michigan criminal case.

The decision will likely again delay any sense of finality for Flint residents who have waited years to learn whether public officials will be held criminally responsible for the crisis.

Many Flint residents were already disillusioned that Snyder had only been charged with misdemeanors, she said. If prosecutors are to re-issue charges, she wants them to request stiffer penalties for the former governor.

“Who’s going to be accountable for this?” Jefferson said. “What, our lives don’t mean anything?”

Bernstein acknowledged in his concurring opinion that “this court remains cognizant of the impact that this decision might have on the residents of Flint, who have suffered an unconscionable injustice.”

Bernstein wrote that preliminary exams common in traditional criminal procedures serve a “crucial function” by allowing defendants to learn about the specific charges they face, confront alleged evidence and prepare a defense. Denying that right, he wrote, “runs afoul of the basic notions of fairness that underlie our adversarial system.”

Nessel inherited the investigation from her GOP predecessor as attorney general, but Republicans on Tuesday blasted her for what they called a bungled prosecution expanded to include Snyder 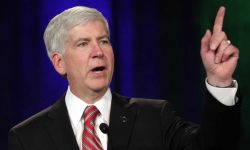 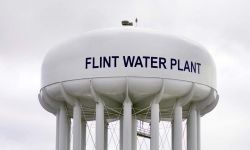