LANSING — Voter turnout across Michigan appeared stronger than expected on Tuesday, with long lines in college towns like Ann Arbor and East Lansing and few problems at the polls, state officials said.

An estimated 2 million people were expected to vote by absentee ballot, said Jake Rollow, spokesperson for the Michigan Secretary of State’s office.

An equal number of in-person votes were likely as well. The record for a gubernatorial election was 4.25 million votes in 2018.

Waits of up to three hours were reported in Grand Rapids and East Lansing.

In the past week, over 552,000 absentee ballots were returned, the highest weekly total since the state began releasing regular updates.

In 2020, when President Joe Biden beat former President Donald Trump in Michigan, more than 5.5 million voted, a record for a presidential election in the state.

Michigan voters agreed in 2018 to open absentee ballots to everyone and the change took effect in 2020.

This is the first statewide gubernatorial election with no-reason absentee ballots and every county has had more people vote absentee than in 2018.

All are staunchly Republican.

But similar gains occurred in Washtenaw County, one of the most reliably liberal areas of Michigan. More than 80,000 voters have cast absentee ballots in Washtenaw as of Tuesday morning, compared to 43,672 in 2018.

Roughly two dozen voters lined up as polls opened at 7 a.m. at the Assembly of Christians Church 2 miles north of the Ohio state line, said Elections Chair Bob Camp, who was working his 29th election.

By 11 a.m., 226 voters had cast their ballots, often lining up along the registration tables: “It is definitely a bit busier than usual,” Camp said.

By 6:30 p.m., voters were still standing in lines in Ann Arbor and East Lansing — home to the University of Michigan and Michigan State University, Rollow said.

All voters in line by 8 p.m. are still eligible to vote. 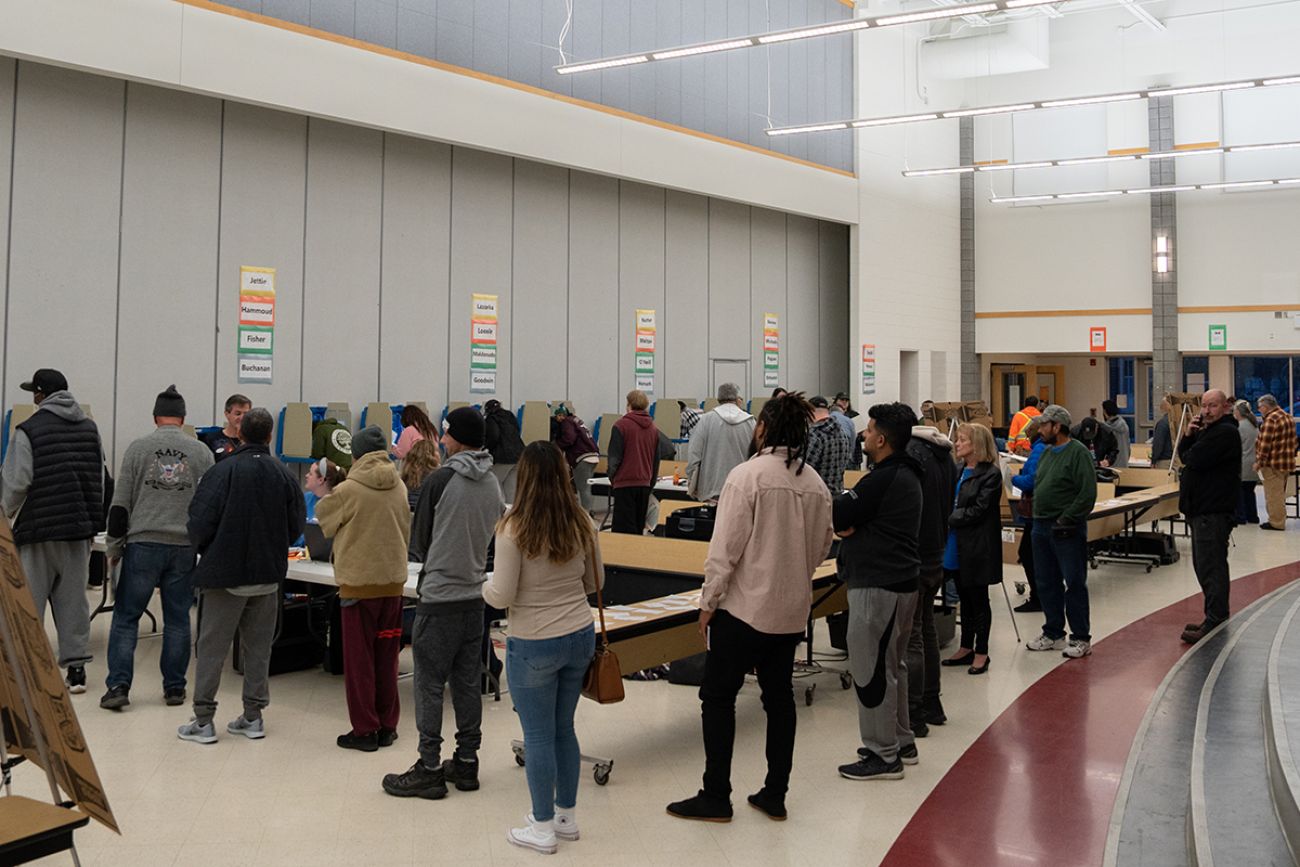 Some polling places experienced data errors and tabulator malfunctions, but none compromised voters’ ability to cast their votes, Rollow said.

In Detroit, some precincts experienced issues with the ePollbook — an electronic version of the qualified voters file that was downloaded onto a laptop to process voting records. Due to a data error, the ePollbook was flagging some in-person ballots as having the same number as absentee ballots that were already issued, local officials have said.

The issue was addressed “quickly” and all eligible voters were still able to vote at the precincts, Rollow told reporters Tuesday night.

The problem occurred when poll workers were about to provide some in-person voters with a ballot. In some cases, the voter had neither requested nor cast an absentee ballot, but the ePollbook flagged the duplicated ballot numbers.

When that happened, poll workers added an additional letter to the in-person ballot to tell them apart from the absentee ballots, the secretary of state’s office said in a Tuesday statement.

Voters were allowed to vote provisionally or by regular ballot and all will be counted, Rollow said.

Former President Donald Trump appeared to seize on the issue Tuesday, taking to social media on Tuesday afternoon to say “the Absentee Ballot situation in Detroit is REALLY BAD,” and claimed that “large numbers” of voters are showing up at the polls only to be turned away.

“Please don’t spread lies to foment or encourage political violence in our state,” Benson tweeted. “Or anywhere. Thanks.”

Additionally, approximately 10 of the state’s 4,000 tabulators were down and had to be rebooted, Rollow said. No ballots were affected by the glitch because they were kept in an auxiliary bin and were processed after the tabulators started working again, he told reporters Tuesday night.

Rollow said the secretary of state’s office heard two cases of voting disruptions at the polls, which he said had been resolved.

In Ann Arbor, a poll challenger repeatedly made “impermissible” challenges to voters who surrendered their absentee ballots to vote in person, which is legal under state law, Rollow said.

And at a school in Detroit, a poll challenger suggested to voters they did not look like they were eligible to vote, Rollow said. That person was no longer at the polling place, he said.

“All voters were able to vote,” Rollow added