The state is beginning to release data about COVID-19 in senior facilities, but the gaps remain striking  — especially since the elderly are so affected by the disease. (Shutterstock)

When Michigan last week released its first list of nursing homes with coronavirus patients, Cathy Wilson scanned it quickly, looking for the facility where her aging mother lives in Royal Oak.

It wasn’t on the list, even though just two days before, Wilson said facility operators told her that seven residents had died from COVID-19 and three more had the disease.

“To find out that seven people had died made me think ‘Do I need to get her out of there?” Wilson said, referring to her mother.

It may be a long wait. Despite promises from Gov. Gretchen Whitmer for better transparency on senior care during the pandemic, Wilson’s mother lives in an assisted-living facility  — and Michigan doesn’t collect information about coronavirus at the home or 4,000 others like it statewide.

Indeed, although Whitmer is beginning to release data about COVID-19 in senior facilities, the gaps remain striking  — especially since the elderly are so affected by the disease.

Despite an April 15 order from Whitmer requiring all long-term care facilities to report coronavirus cases, Michigan so far has only released information from nursing homes.

The records showed Michigan has nearly 2,600 cases at 146 homes, but patient deaths aren’t included. Nor are the number of residents who have recovered.

And Michigan allows nursing homes to self-report the information about coronavirus. So far, 13 percent of them (61 of 482) have not done so.

State officials said they hope to close some of those holes soon.

They plan to finish drafting reporting guidelines for long-term care facilities this week, after which a timeline for the release of data could be forthcoming, said Robert Wheaton, a spokesperson for the Michigan Department of Health and Human Services.

The pace of reporting statewide contrasts to Detroit, where Mayor Mike Duggan dispatched teams to test residents and staffers in 27 city facilities. The city found 1 in 3 nursing home residents had coronavirus and published the results online.

That’s a level of rigor that advocates for the aged say helps not only nursing home residents and their families but staffers as well.

“I’m really glad they are collecting the data, and I’m glad they’re making public as much as they can.”

The push for more reporting, detailed extensively by Bridge in recent weeks, comes as it has become clear the virus is devastating nursing homes.

Nationwide, more than a quarter of all coronavirus deaths, 11,000 out of 39,000, were at nursing homes in 36 states, according to NBC News. More than half of all deaths in Oregon and Maryland were in nursing homes.

More information on the scope of the problem could drive better policies that could lead to better care for residents, said Priya Chidambaram, an analyst with the Kaiser Family Foundation who recently studied how different states were reporting data.

States such as Florida, Tennessee and Oregon have provided detailed information about long-term care facilities, according to Chidambaram’s research for the nonprofit that focuses on national health care issues.

Researchers have said nursing homes and other senior facilities are perfect breeding grounds for the virus, as many residents are in compromised health.

Nationwide, 75 percent of nursing homes have been cited for infection control errors. That rate is similar or slightly higher in Michigan, according to Medicare data reviewed by Bridge Magazine.

But with coronavirus so widespread, it has hit facilities with cited “deficiencies” and those without, Chidambaram said.

Indeed, of the seven nursing homes statewide with the most severe deficiencies during the last three years of state inspections, only one has reported any COVID-19 cases, according to records reviewed by Bridge.

Those that were identified represent fewer than 10 percent of all long-term care facilities.

One problem: Some types of long-term care facilities aren’t licensed by the state, Slocum said, and the state knows little about assisted-living and “memory care” facilities.

Overall, Detroit found 940 cases in nursing homes and 187 deaths, about 20 percent of the city’s total.

But eight of the Detroit nursing homes, which had 189 cases, did not report data to the state.

Wilson hopes to get another update on Wednesday about the facility where her 92-year-old mother lives. She said she wishes all facilities in the state that care for the elderly were tested and the results were made public.

“If you’re taking care of a senior in a senior care facility, you should,” she said. 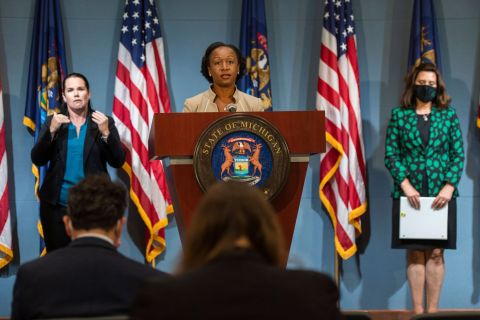 State officials say a third of people contacted by tracers are refusing to say who they’ve potentially exposed, helping fuel a recent jump in coronavirus cases that has Michigan health officials worried.

Nursing homes are rarely running humanely for both residents and front line employees. There should be more public options, rather than for profits. The workers are poorly paid and understaffed. It's so sad to your loved ones there when they have to go there for rehab after being thrown out of hospitals prematurely. There's a book of violations available to anyone at the front desk and they are so scary. Unfortunately, all establishments have these violations and there aren't any good choices. Now with covid, I'm so happy that I can care for my parents in my home, but many people just can't do that.

Even non-profits, such as Hope Network are awful places for what they call, "integrated care" facilities. Poorly paid staff, lots of health and wellness infractions. Cover ups on all levels. They are not reporting COVID-19 cases, when I know for a fact that they are experiencing active cases. Care of our elderly and mental health population is criminal.

All Long Term Care Facilities aka Nursing Homes, are required by federal law to be licensed by their respective state through the Centers for Medicare and Medicaid Services (CMS). Without the license, Long Term Care Facilities can't receive reimbursement for the services they provide. Therefore, the federal monies are submitted to the nursing homes through the state. And, the states are mandated to inspect these facilities on a yearly basis, or more often in the event there is a complaint, a suspicious death of a patient, etc. The State Operations Manual - Guidance to Surveyors for Long Term Care Facilities or SOM for short addresses what is required for each survey. Each state has the same SOM to follow. It dictates the procedures State Surveyors must adhere to when inspecting Long Term Care Facilities and areas to inspect such as abuse, exploitation and neglect, physician services, nursing services, infection control, etc. Here is the CMS link: https://www.cms.gov/Regulations-and-Guidance/Guidance/Manuals/downloads/...
One question to ask is how many surveyors there are in Michigan to accomplish this task? I was a Surveyor for the State of Idaho, and we were very busy people. We would conduct each survey with a team and sometimes would be in that locality for a week and then it would take about a week for all of us to generate the final report. If there were serious concerns which may place that facility's license at risk, then the Federal Surveyors would arrive from their Regional CMS office, do an on-site survey with us and then they would decide the fate of the license. Michigan's Regional Office, Region 5, is located in Chicago. There are a total of 10 total Regional Offices nationwide.
In regard to the problem of "Long-term care facilities aren’t licensed by the state, Slocum said, and the state knows little about assisted-living and “memory care” facilities." Michigan can adapt or include the total SOM contents for these facilities. Why re-invent the wheel? However, there would need to be more surveyors in this regard, which may be the better fiscal choice than potential lawsuits, IMHO. it's a deplorable situation that must change.

Despite promises from Gov. Gretchen Whitmer for better transparency on senior care during the pandemic, it isn't happening.

Despite Whitmer saying she was requiring all long-term care facilities to report coronavirus cases, the government so far has only released information from nursing homes.

Despite lots of talk about doing things, lots of results are not happening. That's Whitmer.

Despite all that, she succeeded in flattening the curve, saving thousands of lives.

Did she really save lives? States that did less and nations that did nothing also flattened their curves, some of them with less deaths than we. And now the curve is flattened, and the shut fiend is killing thousands- now is the time to end it.

There are a number of nursing homes that should be shut down over what they've done during this crisis, and I do not understand why so many States have granted them immunity from lawsuits.
Within Wayne County alone, I know of more than one Plymouth facility that openly declared it forbidden for employees to wear N95 masks for a full half month into the officially WHO declared pandemic. Even if you brought your own. Wearing one would result in immediate termination. They cut off all visitation before the pandemic was declared, but were told repeatedly this was not enough: that staff would likely be infected and asymptomatic at some point, and infect the seniors.
And that's what happened.
Fast forward, and least 30% of the seniors are now dead at this nursing home. The owners of this business literally killed the seniors with their policy, and if they have immunity, they will literally get away with murder.

No one was ready for this and still doing the best they can.

The single biggest thing that the State should be doing is protecting vulnerable populations! And yet, the Governor spends her time sending care packages to comedians, going on national television shows to self-promote, and bad-mouthing a bunch of protesters. 90% of her effort- her time, he emphasis, her words, her rules/regulations, etc- should be focused on those who are dying! All this other stuff is just distractions! At the end of this, she'll talk about all that she did- which is shut down stuff- but the conversation should be all that she didn't do- like protect our vulnerable populations from death.