Michigan’s Medicaid ballooned during COVID. It’s about to be pared back.

Federally-funded health clinics like Western Wayne Family Health Centers provide medical, behavior and dental care to 1 of every 14 Michiganders. More than half of those patients get health coverage through Medicaid, including Wilma Santos, 56, who got a needed dental filling on Thursday. (Bridge photo by Robin Erb)
April 15, 2022
Robin Erb (Email)
Michigan Health Watch
Coronavirus Michigan

Michigan Health Watch
Michigan’s Medicaid ballooned during COVID. It’s about to be pared back.

Nearly 3 million Michiganders now receiving Medicaid may have to prove they remain eligible starting as early as this summer. And if all doesn’t go well, hundreds of thousands could risk losing health coverage.

The Biden administration on Tuesday extended the pandemic public health emergency to mid-July, and with it several protections for lower-income Americans, including a rule that prevents states from removing anyone from Medicaid rolls during COVID.

Once that protection ends, Michigan and other states can once again remove recipients who do not qualify. Since the pandemic began, nearly 600,000 additional Michigan residents have collected Medicaid benefits, growth that costs the state an additional $50 million each month, compared to pre-pandemic, according to a state budget briefing in December.

The impending summer change worries people like Krista Nordberg, program manager at the Washtenaw County Health Plan, which helps people enroll in Medicaid or through the subsidized federal Marketplace.

The first concern is the sheer task for the state in notifying so many people, Nordberg and others said, a challenge made harder by the number of  people who moved amid pandemic upheaval. Some may not (or no longer)  have internet access to the MiBridges state portal, or be unable to navigate a often bureaucratic online process to upload the correct information — copies of paystubs, for example.

“People likely aren’t going to get their mail,” Nordberg said. “There are probably a lot of other people who will be over income, and they’ll need to move to employer coverage or the Marketplace.”

As COVID-19 disrupted the economy, sending many families into lower income brackets, Michigan’s Medicaid program grew from more than 2.4 million people to more than 3.0 million, a nearly 24 percent increase in 24 months.

The Michigan Department of Health and Human Services is working with health insurers who provide Medicaid plans to make sure they have updated addresses and contact information for beneficiaries, said Kate Massey, a senior deputy director at MDHHS’s behavioral and physical health and aging services office.

MDHHS will eventually reach out to individuals by text message, U.S. mail, and messages on MiBridges. It will use social media and paid advertising to urge Michiganders to make sure their contact information is updated, Massey said.

Michigan is one of 41 states reporting that it will take a full year to go through its database to review eligibility, according to a recent survey by KFF, a San Francisco-based research nonprofit that analyzes health issues.

Nordberg and others worry that qualified beneficiaries will miss notices or be unable to comply with the proper paperwork. They could be bumped off Medicaid, not realizing it until they go to the doctor and are told they’re no longer covered, several advocates told Bridge Michigan.

By then, it could be too late to seek coverage elsewhere, even if they can afford it, she said.

“We want to make sure Michigan is doing a good, well-intentioned job of  finding those patients who are eligible, but (for whom) a piece of the paperwork might have fallen through,” said Dr. Pooja Neiman, a health policy fellow with the Lansing-based Michigan League for Public Policy.

Medicaid, which provides health care coverage for low-income and disabled Michiganders, is funded by state and federal tax dollars.

As COVID tore through the country in 2020, the Families First Coronavirus Response Act, offered a 6.5 percent increase in matching funds to states that agreed to stop bumping people out of Medicaid coverage for the duration of the public health emergency.

For more than two years, that action essentially halted the churn of people in and out of Medicaid programs that kept enrollment fairly stable over time. That included, for instance, an unknown number of people who landed higher-paying jobs during the pandemic that made them no longer eligible for Medicaid, even as the state continues to pay for them.

The largest enrollment growth has been in Healthy Michigan, the expanded Medicaid  program enabled by the 2010 Affordable Care Act. The program gives coverage to Michiganders with incomes under 138 percent of the Federal Poverty Level — about $12,880 for an individual or $27,750 for a family of four in 2022. 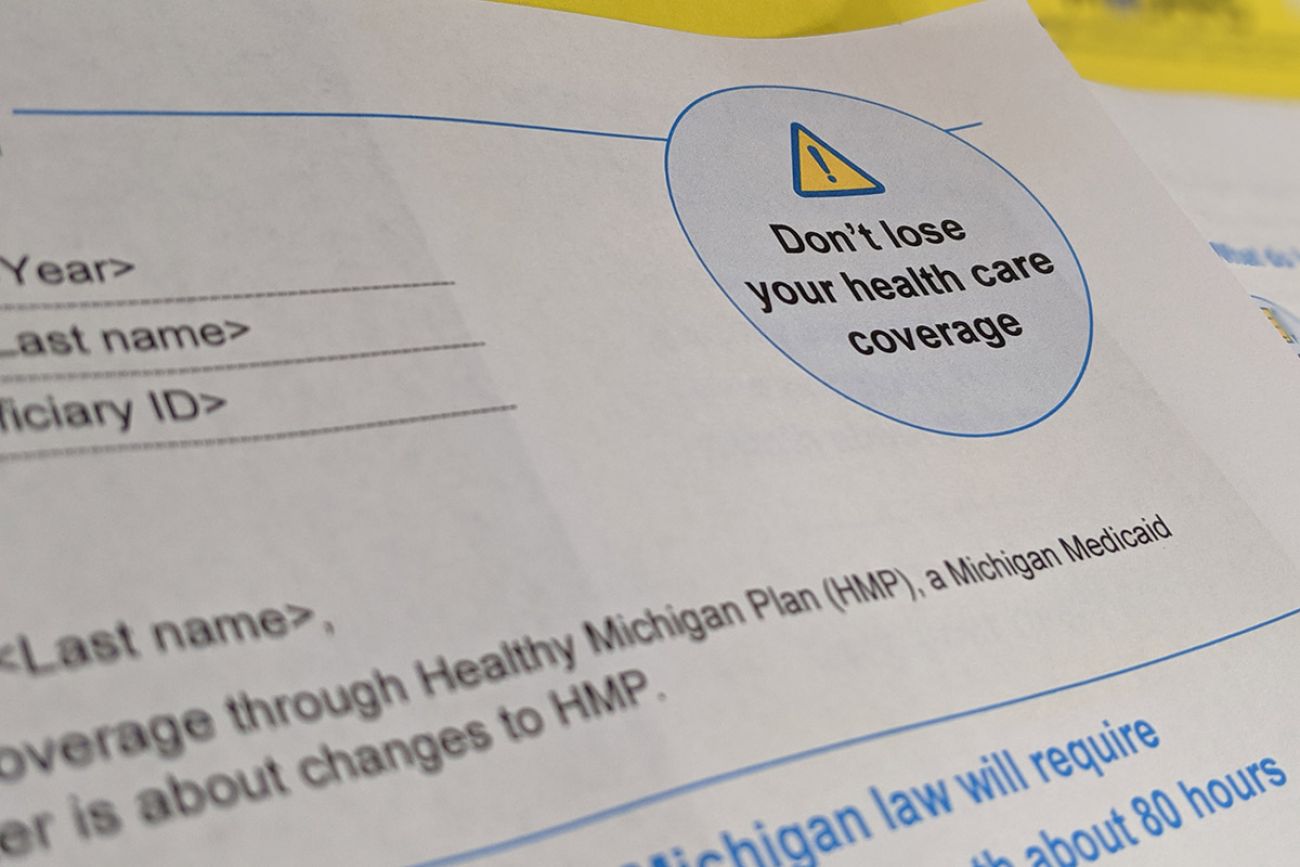 She moved here from Texas in the summer of 2020 and, with no job, she was covered by Healthy Michigan. She comes here every month, meeting with a nurse practitioner to monitor her newly diagnosed diabetes and, if necessary, tweak medications.

“I’m only 33, but I’m on seven medications, plus the suboxone program,” the mother of three said, referring to the center’s program that helps her steer clear of the painkiller addiction that nearly wrecked her life more than seven years ago.

It’s unsettling, she said, that she will be among three million people who have to be notified of the change — a change she said she first learned of from a Bridge reporter: “I need to be here,” she said, referring to the center’s services.

Federally-funded centers such as the clinic in Western Wayne also serve uninsured patients. But some studies show that uninsured people are more likely than those with coverage to skip routine screenings and regular check-ups.

If large numbers of beneficiaries lose coverage through redetermination because they are no longer income-eligible, some will likely skip routine and follow-up care, said Western Wayne’s Leslie Howard, who helps patients enroll in Medicaid. She also calls patients to make sure they are following through with referrals to specialists and getting their prescriptions filled.

It’s common for beneficiaries to be confused by the MiBridges portal or lose access to it because they forget their passwords and usernames or change emails and cell phones, Howard said.

“They’re constantly getting locked out for another 24 hours” when they try to log in, Howard said.

Outside Howard’s office Thursday afternoon, Wilma Santos, 56, was waiting to get a cavity filled at Western Wayne’s dental clinic.

Like Balli, the disabled heavy machinery operator from Puerto Rico told Bridge she hadn’t heard about the forthcoming redetermination shift by MDHHS. She said she’ll turn to a family friend to help her fill out documents when the time comes.

“There’s a lot of paperwork and a lot of questions, and I can’t work my phone so well,” she said. 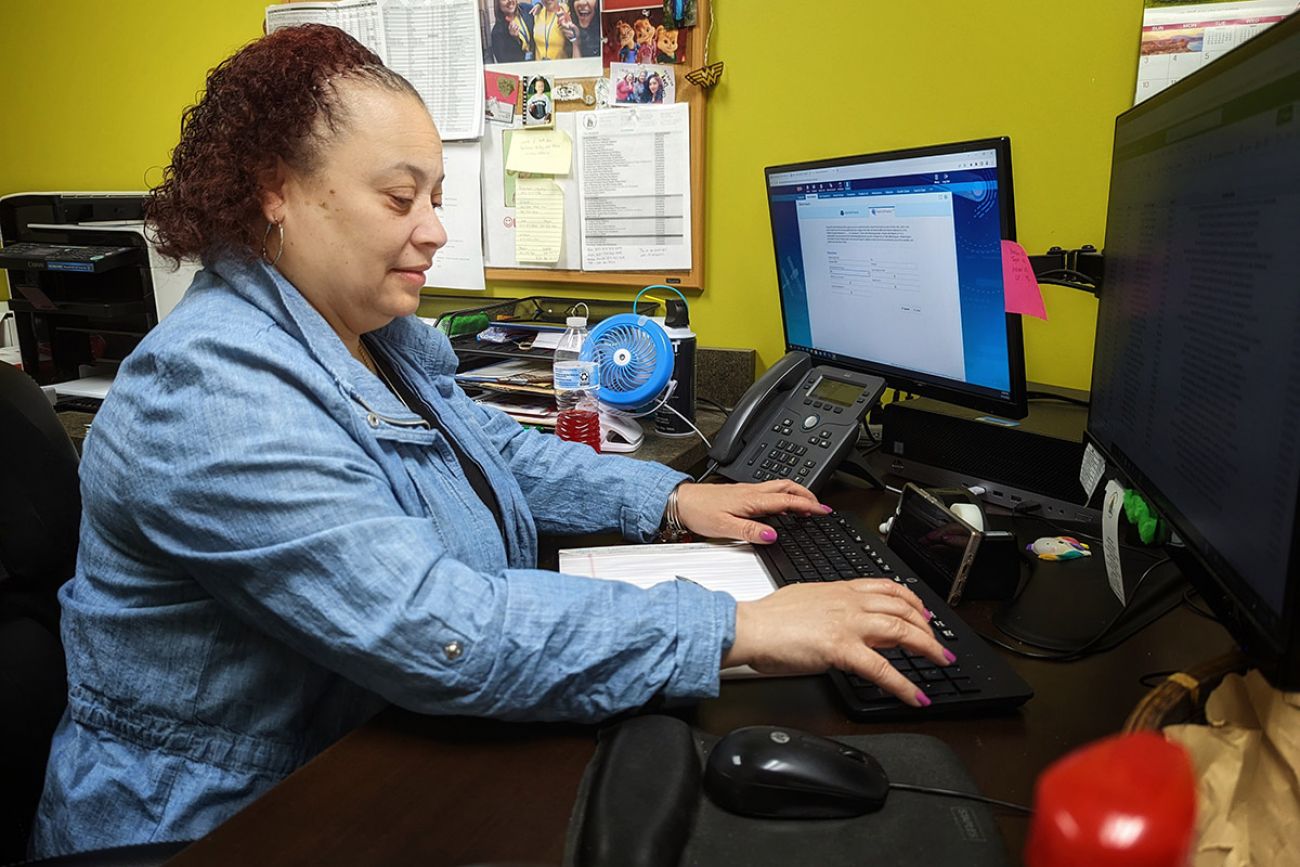 Michiganders who will no longer be eligible for Medicaid will have to shop for insurance on the Marketplace, the online government website, said Leslie Howard, who processes Medicaid applications at the Inskster location of the Western Wayne Family Health Centers. (Bridge photo by Robin Erb)

Nationally, enrollment in Medicaid and the Children’s Health Insurance Plan that covers children had swollen by 21.4 percent since the start of the pandemic — to nearly 86 million people nationally through November, according to the most recently available national data.

KFF estimated that as many as 13 percent of Medicaid beneficiaries will lose coverage nationally, with wide variability among states. The Georgetown Health Policy Institute estimated in February that 6.7 million or more children nationally could lose coverage, possibly leaving them uninsured.

It’s unclear how many people will lose coverage in Michigan because they now exceed the income limit, said the state’s Massey.

“We've never had such an extended period of time where our redeterminations have been in suspension… so we really don't have a good handle on the outcome,” she said.

Teresa Kohn and Deb Seaman of Sandusky, in Michigan’s thumb region, said they’re ready to help the roughly 100 low-income seniors who are eligible both for Medicare and Medicaid at the low-income housing apartment buildings Kohn and Seaman manage in Sandusky.

They said it remains unclear to them how seniors will be engaged in the notification process.

Kohn and Seaman said they’re always happy to help residents with the paperwork churn so they can access food vouchers, housing, and other government services — a documentation process that can be painfully complicated at times, the women told Bridge.

Residents often “come to us like they’re holding an artifact, put it on our desk and ask for help,” Seaman said.

They said they worry less about being able to help the residents than about whether notifications will arrive in time.

With more than three million people to process, having enough state staff to help beneficiaries sort through questions will be crucial, Kohn said.