Deaths from COVID-19 were only part of the driver of population losses in Michigan. So too were residents simply leaving the state.
July 1, 2022
Mike Wilkinson (Email)
Quality of Life
Coronavirus Michigan

The COVID-19 pandemic hit many Michigan counties hard, helping fuel population losses statewide in 2020 and 2021, according to U.S. Census estimates released this week.

But for population centers including Wayne, Oakland, Macomb and Washtenaw counties, the bigger driver was simply people leaving for other counties and states, the data shows.

Wayne County’s population fell by about 1 percent overall to 1.77 million, and an estimated 15,857 residents left the county for another part of Michigan or the country.

The estimates reverse what had been slow, steady growth in Michigan, the only state to lose population from 2000 to 2010.

Many of those losses can be attributed to the nearly 13,000 residents who died of COVID-19 in that time, with the pandemic exacerbating the growing imbalance between deaths and births in the state.

Still, west and northern Michigan recorded modest gains, as those regions had when the decennial 2020 Census was reported last year.

The state’s fastest growing county, Ottawa, added an estimated 2,370 people, while Livingston County added 1,041. They were the only two counties to add at least 1,000 residents.

In 2019, nine states were losing population nationwide, while Michigan was still growing (albeit slowly, by about 2,800 people).

In 2021, 17 states and the District of Columbia were estimated to be losing population, including Michigan. 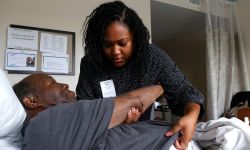