Detroit makes it easy to switch schools. So parents do. Frequently.

One Detroit mom said she moved her son to four schools by the third grade because he kept getting bullied.

Another said she transferred her daughter to three different schools by the sixth grade in hopes of finding a better experience.

Her child’s first school “couldn't keep a teacher for her class the whole school year,” she said. The second one “was completely unorganized.”

Other Detroit parents who responded to a survey conducted by Chalkbeat and the nonprofit news service Outlier Media offered a mix of answers for why they moved their children from one school to the next. Their reasons: academic struggles, issues with school discipline, and personal upheavals that forced them to find a new home.

Chalkbeat and Outlier, together with our partners at Bridge Magazine, conducted the survey over three weeks last spring to better understand the forces behind what some educators say is the largest hurdle blocking academic success in Detroit: The fact that students don’t stay.

Across the city, a recent study found that 1 in 4 students change schools every year. In elementary schools, the rate is 1 in 3. And many students make those moves during the school year.

All of that movement — fueled in part by state policy in Michigan that has given Detroit one of the most robust systems of school choice in the country — has created a level of instability with serious ramifications for children and schools. It brings down test scores, drives up dropout rates, and exacerbates behavioral problems.

But while studies have clearly documented the effects of students moving from place to place, there’s not much research on why parents make so many moves.

Ben Pogodzinski and Sarah Winchell Lenhoff, two Wayne State University professors who have spent the last year analyzing data on student transience in Detroit, found that only about 40 percent of children who changed schools between the 2014-15 and 2015-16 academic years had changed their address to a different ZIP code.

Chalkbeat and Outlier set out to identify the other reasons. We surveyed 100 Detroit parents using a text messaging platform called GroundSource that enabled us to reach a representative sample of parents across the city, asking respondents how often their children had changed schools — and why.

In all, the parents we surveyed moved their children 197 times outside of routine moves, with roughly 40 percent of those moves taking place during the school year.

And their reasons were varied: 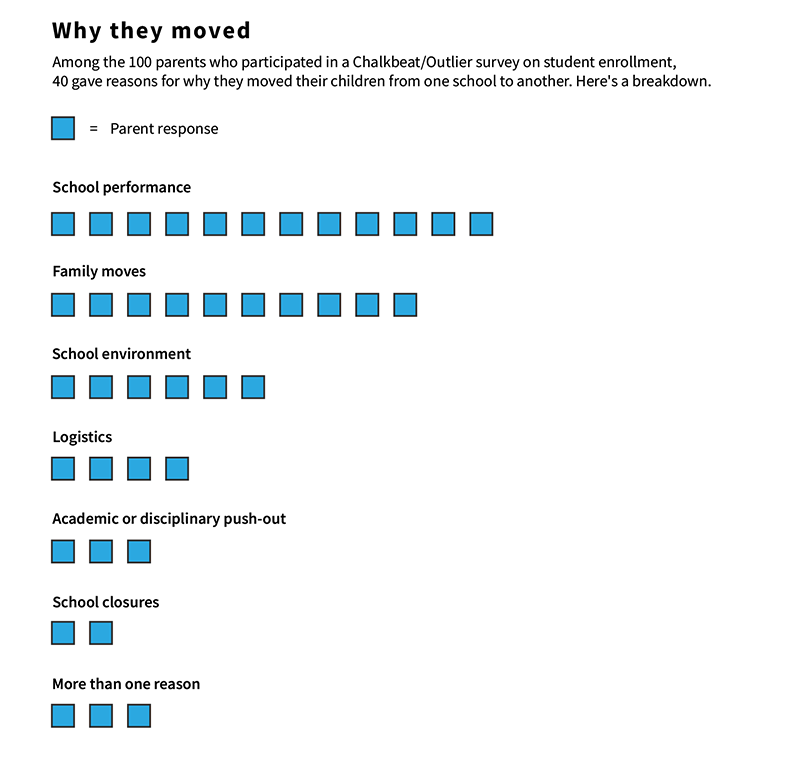 It’s easy to switch schools in Detroit because parents here enjoy far more school options than their peers in other parts of the country.

Detroit parents can choose from more than 100 district schools and 88 charter schools in the city. Or they can cross the city border to one of many suburban district or charter schools that accept out-of-district kids. Since Detroit and many of its surrounding communities have significantly more school seats than children, many schools in the area have space available for nearly anyone who wants to attend.

That means parents who aren’t happy with their local school, who don’t think it’s safe, or who discover that a new job or a new shift makes a school’s location or schedule impractical for the family are free to go somewhere else.

It’s a luxury for which many parents are grateful.

“When it comes down to it, I’m looking out for the best interest of my kids,” said Lyjuan Smith, who had two children at Detroit’s Bethune Elementary-Middle School last year but planned to move them to a charter school this year because she thought they would get a better education there.

Randy Liepa, who heads the county educational agency that supports school districts in Wayne County, including Detroit, said most of the districts in the county see students coming and going as parents explore their options.

“It’s definitely grown over time,” Liepa said. “Mom and Dad will think, ‘He needs a new environment,’ so they move him, and then that doesn’t work, and then they wind up back where they started. Then they try another option.”

In the Chalkbeat/Outlier survey, a majority of parents, 66 percent, said they thought switching schools made it easier for their child to succeed in school. 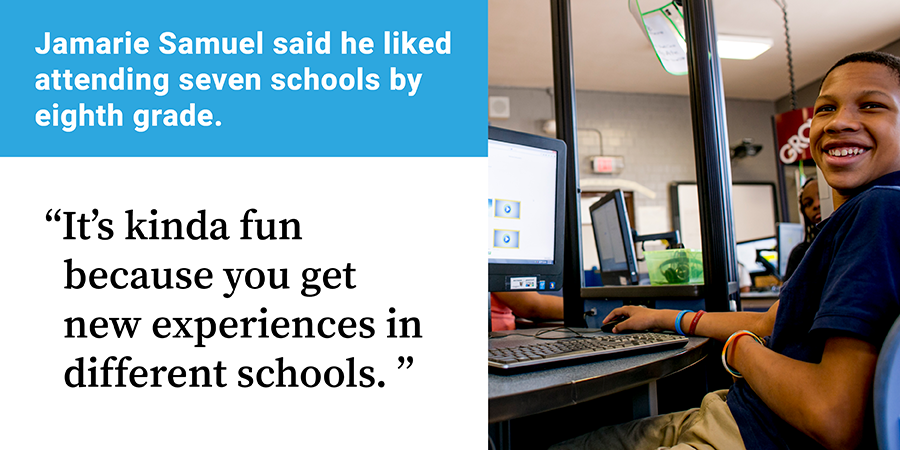 Only 11 percent said they thought switching schools made things harder.

The main Detroit district has the lowest test scores in the nation, and charter schools in Detroit are not much better. A recent analysis found that the vast majority of Detroit children — 70,000 of the 85,000 attending public school in the city — are in schools that don’t meet the state’s basic criteria for performance. And many cash-strapped schools also struggle to maintain their buildings and give children enough support to prevent fights and behavioral problems.

That means that while families keep moving, continually looking for something better, the odds are that they’ll find similar problems at their next school and have to move yet again.

And the cycle will continue, making things more difficult for each child with each move.

As stated many of the poor live in a life of constant chaos, often self inflicted and not recognized as anything but the norm. If stated I didn't notice but as with most things a relatively small percentage of the population is likely responsible for a super-sized percentage of, in this case, the moves. Second we are looking at kids who are likely already struggling academically and changing the school isn't the solution therefore doesn't solve the issue. The biggest driver of this problem i'd suggest is our insistence to prioritize egalitarian objectives over academic achievement. If kids had to qualify to gain admittance to a given school they desired to attend the atmosphere would be totally different. In our current approach they all sink.

From the article above: "The main Detroit district has the lowest test scores in the nation, and charter schools in Detroit are not much better. "

From the link supplied in that sentence presumably to back up the evidence: "[Detroit] charter schools provide essential examples of school-level and system-level commitments to quality that can serve as models to other communities." It notes that the majority of students see significantly improved educational results after going from district schools to charters with almost none doing worse after switching.

Hi, Jarrett. Thanks for reading. The Wayne State University research shows that Detroit charters experience the same level of churn, student mobility and enrollment instability as district schools. If charters were significantly better, the enrollment would be stable. However, on average, charters perform slightly better than district schools with a majority of charters testing in the bottom quarter of all schools in the state.