Kaira Gandy, who taught seventh and eighth grade at Bethune Elementary-Middle School in Detroit last year, said it usually takes a couple weeks to get to know students. That isn’t always easy when they switch schools so often. (Bridge photo by Anthony Lanzilote)

Some days, it’s a scared-looking child who needs a textbook, a desk, and perhaps a kind word.

Other days, it’s a familiar face that’s no longer there — a beloved student who has left without saying goodbye.

This is life for teachers who work in schools across Detroit, where a majority of students — nearly 60 percent, according to a recent analysis — were enrolled in two or more schools during a recent school year, many jumping from one school to another, and sometimes back again.

All that movement has serious consequences for kids, including significantly lower test scores and higher dropout rates, research shows.

For their teachers, it’s a recipe for heartbreak.

Parents of most of the children who leave don’t notify the school, so their teachers are left to wonder how they’re doing.

“They’re just gone,” Eaton said. “Emotionally, it’s draining. And it’s sad because … you don’t know what the situation is like for them.”

The next day or the following week, Eaton said, another child might arrive in her classroom. And that takes a different kind of toll — the kind that can throw off the culture a teacher works hard to establish. 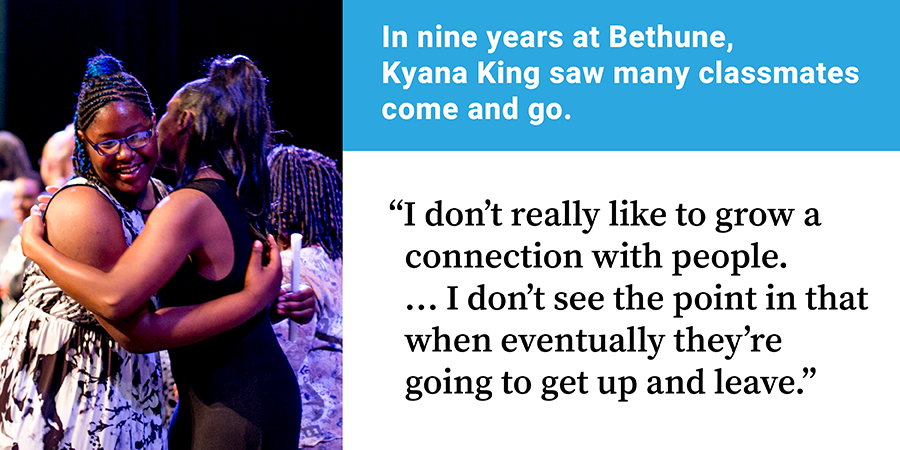 “It affects the other students,” Eaton said. “I had a new student come in [last] year and he was very rambunctious. His behaviors were very challenging and when he came in, the other boys started imitating him. And it really made me change my behavior plan, because he was a little out of control. He wasn’t used to the structure of my class.”

Kaira Gandy, who taught seventh- and eighth-grade English at Bethune last year, said it takes her two weeks to get to know a new student. And that work to understand a student’s needs and abilities often takes place while trying to handle disruption that the new student creates.

“Some of them are tough because they’ve been to four schools and they know, ‘I gotta get in there and I gotta make a name for myself so I fit in, so I don’t get lost in the shuffle’ … Some of them are like Oliver Twist. They are used to being orphans, used to traveling. They’ve learned to stick up for themselves.”

Teachers say they wish they had a better way to learn about new students when they arrive.

Lydia Nickleberry, a second-grade teacher at Bethune, faced a far different situation at a previous teaching job a couple years ago at Chandler Park Academy, a charter school in Harper Woods. Students largely returned every year, Nickleberry said, and it was easy to get information about students from their previous teachers.

“When you have the previous teacher in your building, you know who to contact,” she said. “Even here [at Bethune], we have sheets we will fill out on the student, tracker sheets. We show where the scores are, what their writing looks like, which parent is the most supportive parent, which one you can call. It’s a whole sheet. It will say this child is supposed to be wearing glasses, but if you see he’s not wearing glasses, you can put him in the front of the class.”

But much of the time, she said, the tracker sheet doesn’t get used because the child changes schools.

Nickleberry said Detroit schools — district schools, charter schools, suburban schools — should work together to develop a system to transmit that kind of information no matter where a child lands.

“Whatever teacher gets that child should be able to pull up what they did,” she said. “They shouldn't have to search that down.”

That would help teachers stay on track when a student arrives. And it might reduce some of the distress for teachers and staff who build relationships with children, only to see them go.

“That hurts so bad!” said Monica Tarver, the PTA president and a teacher’s aide at Bethune. “You’ve got this relationship. You’re working on the progress … You set a goal once you work with them, and then you can’t even finish the goal. It’s emotional. It really is.”