LANSING — Every second matters in a mass shooting and limiting high-capacity ammunition magazines could save lives by slowing shooters and forcing them to reload more often, Michigan Democrats argued Thursday as they proposed new regulations.

Legislation set to be introduced in the state House and Senate would prohibit the sale or possession of new magazines capable of holding more than 10 rounds of ammunition, beginning in 2023.

It's the latest front in a push from Democrats, who are a minority in the Michigan Legislature and have renewed their calls for Republicans to consider tighter firearm regulations following last week's mass shooting at Oxford High School.

As with other gun-control measures introduced by Democrats, it faces murky prospects in the Legislature.

Authorities say 15-year-old Ethan Crumbley carried three 15-round magazines with him to school on Nov. 30, along with a 9MM Sig Sauer pistol that he used to kill four classmates and injure others. His father had purchased the gun and ammunition days earlier.

Deputies confronted Crumbley in the school and confiscated his gun within five minutes of the first 911 call, according to Oakland County Sheriff Mike Bouchard, but investigators say the suspected shooter had already fired more than 30 shots.

"The time that it takes to change a magazine can be life saving, and if the number of shots available in the first (magazine) is less, that's less opportunity to hurt someone," said Sen. Rosemary Bayer, a Beverly Hills Democrat who represents Oxford and chairs the Michigan Firearm Safety and Violence Prevention Caucus.

"It may very well have made a difference last week," Bayer said during a Capitol event announcing the new legislation. "We don't know."

Crumbley has pleaded not guilty to terrorism and murder charges that could put him behind bars for the rest of his life. His parents were charged last week with involuntary manslaughter on claims they ignored warning signs and insisted the 15-year-old stay in school the day of the shooting.

Thursday, an attorney for Riley Franz, 17, who was shot in the neck, and her 14-year-old sister, Bella, announced they are suing the school district in federal court for $100 million.

In Lansing, the Democrats’ proposal would not ban high-capacity magazines. Instead, it would prohibit new sales and allow existing owners to keep their magazines if they report possession to a local law enforcement agency.

Under the pending bills, sale or possession of a new high-capacity magazine could result in up to 90 days in jail. Subsequent violations would be a felony punishable by up to two years in prison and a fine of up to $5,000.

His group’s namesake, former Arizona U.S. Rep. Gabby Giffords, was shot in the head during a public event with constituents in 2011. She survived and now fights for new firearm regulations across the country.

When the gunman who shot Giffords was reloading, "a bystander tackled that person and stopped the tragedy from going any further than it did," Holihan said. "This bill ... will help Michigan be a safer place for children and families."

Democrats began developing the legislation before the Oxford shooting, according to Bayer. But it is among a series of new or pending gun bills announced following the deaths of Hana St. Juliana, 14, Madisyn Baldwin, 17, Tate Myre, 16, and Justin Shilling, 17.

State Rep. Rachel Hood, D-Grand Rapids, said Tuesday she is drafting legislation to propose a seven-day wait period for all pistol purchases in the state, arguing that a "cooling-off period" could prevent impulsive acts of gun violence like the Oxford shooting.

Democrats, who formed a gun violence prevention caucus in 2016, have also renewed calls for Republicans to take up previously introduced proposals, including House and Senate packages that would require adult firearm owners who live with kids to use gun locks or otherwise make their weapons inaccessible to minors.

"Can we please work together to stop this before we have another tragedy," said Rep. Brenda Carter, D-Pontiac, who told reporters her son and nephew were both victims of gun violence.

"We welcome (Republicans) in answering this call for our state to put in long lasting change."

"We're still mourning the loss of those children, and we want to make sure that if there are changes that need to be made, that we're looking at those options and keeping an open mind to whatever ... will help curb this kind of thing from happening again in the future," Wentworth said.

But Republicans were noncommittal on Thursday as Democrats announced the new ammunition magazine legislation.

"We need to enforce the laws we already have," said Abby Mitch, a spokesperson for Senate Republicans and Majority Leader Mike Shirkey, who has already signaled he is hesitant to make any major changes to firearm policy.

“If we get obsessed with eliminating all risks, we will then develop and evolve into a country we won’t recognize, because we'll also have no freedoms,” Shirkey said last week after the Oxford shooting. “It's a very narrow road, and it's hard.”

Shirkey is open to holding a hearing on so-called red flag gun legislation, according to Mitch, and is keeping to a promise he made in 2019 when Bayer and other Democrats proposed bills following mass shootings in Texas and Ohio

That legislation would allow police to seize guns from individuals if a judge determines there is a reasonable cause to believe the person is likely to hurt themselves or others. A planned hearing never happened, in part because the COVID-19 upended the legislative calendar in 2020.

Bayer said Thursday she plans to reintroduce the red flag bills early next year and expects Shirkey will still hold a committee hearing for public debate.

"We're holding his feet to that, and he has said he will do that," Bayer told reporters. "That's an open crack in the door for the first time, and then we'll push the door open a little further and a little further until we get this done." 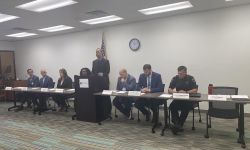