Oxford declines Michigan AG offer to probe shooting. Nessel may do so anyway

“We’re not going to just do nothing,” Nessel told reporters Tuesday morning, the night after she said she was “extremely disappointed” by the district’s decision to decline her offer.

She said her office will review evidence, as well as school policy and protocols, following statements from Oakland County Prosecutor Karen McDonald that the school should not have allowed suspected shooter Ethan Crumbley, 15, to return from class following a meeting about disturbing drawings the day of the massacre.

Nessel said she hasn’t “seen information that points to culpability on the part of anyone in the school district, but that's not to say that doesn't exist.”

She said she plans to hold in-person meetings with Oxford residents and community members to hear their concerns before making a final determination on whether to launch a full investigation.

“This is one of the worst school shootings that we've had in the history of the state of Michigan. This was a tragedy on every level,” Nessel said.

“I really do think it's incumbent upon the Michigan Department of Attorney General and the top law enforcement official in the state to conduct a further review.”

A spokesperson for Oxford Community Schools didn’t immediately respond to a request for comment from Bridge Michigan. But the attorney for Oxford Community Schools told Nessel in an email earlier this week that her review is not necessary because the district is already cooperating with an investigation involving the Oakland County sheriff and prosecutor, as well as with experts in its own internal probe.

"If we require your assistance in the future, we will contact you," Timothy Mullins, the school district attorney, wrote Monday to Nessel's office, according to The Detroit News, which obtained a copy of the email.

Oxford Superintendent Tim Throne wrote a letter to the community on Saturday saying he has “personally asked for a third-party review” of the district’s handling of events leading up to the shooting that killed Tate Myre, 16, a varsity football team captain; Hana St. Juliana, a 14-year-old who played volleyball and basketball; Madisyn Baldwin, 17, an aspiring artist; and Justin Shilling, 17, who was a varsity bowler.

Seven others were injured, including a teacher.

While Oxford has declined Nessel’s offer to investigate, it’s unclear whether the district has hired a firm to handle the probe.

According to McDonald, Crumbley had shown warnings to school officials in the days prior to the tragedy.

The day before the shooting, a school staffer saw the sophomore use his phone to search online for ammunition.  Crumbley told school officials his family participated in target shooting as a sport, according to the school.

The next day, a teacher spotted a school assignment on the teenager’s desk that included a drawing of a semi-automatic handgun pointing at the words, “The thoughts won’t stop, help me,” and the drawing of a bullet with the words, “Blood everywhere,” according to prosecutors.

The drawing also included a person who appeared to be shot twice and bleeding, and a laughing emoji. Further down, the words: “My life is useless” and “The world is dead.”

Crumbley and his parents were summoned to a school meeting. Despite the drawings, Crumbley was allowed to return to the classroom, and his backpack was not searched by his parents nor school officials, McDonald said.

It’s unclear whether the gun was in the backpack.

Crumbley is being charged as an adult and faces a host of murder charges that could imprison him for life. His parents are also jailed on involuntary manslaughter charges on allegations they bought the boy a pistol, didn’t keep it secure and ignored warning signs before the tragedy.

McDonald, the prosecutor, has suggested the school district could’ve done more to prevent the tragedy.

“A lot could have been done differently. I mean, at that meeting he was allowed to go back to school,” McDonald told Good Morning America on Monday.

“We know that he either had that weapon with him or someplace where he could have stored it in the school, but he had it in the school. There's no question. And leaving the decision to parents about whether he goes home or not ....”

McDonald has declined to say whether school officials could face charges for the tragedy. 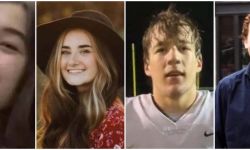