LANSING — A string of election losses by Black Democrats on Tuesday is reviving fears that minority representation in the Legislature could dramatically decrease next year because of redistricting.

Currently, 20 Black lawmakers serve in the Legislature: five in the Senate and 15 in the House.

The number could decrease to three in the Senate next year after Tuesday’s primaries, and while a final tally in the House won’t be known until after November elections, “it's not been a great day for Black representation,” Democratic consultant Adrian Hemond said Wednesday.

“Redistricting has really screwed things up,” Detroit political consultant Adolph Mongo said. “Those folks that are going to represent us don't look like us.”

The maps drawn by an independent citizens’ commission — created by voters in 2018 — have survived court challenges, but faced months of criticism for dramatically reducing the number of districts in which people of color comprise the majority of residents.

Members of the redistricting commission have claimed minorities could still be elected in the new districts even though the percentage of people of color dropped below 50 percent.

Some stuck to that argument in the face of renewed criticism on Wednesday.

Commissioner Anthony Eid, a nonpartisan member of the commission, said it’s too early to jump to conclusions without an analysis of who voted on Tuesday.

But there were a string of high-profile losses.

In Detroit, residents are poised to lose Black representation in Congress for the first time in 70 years, after Indian-American businessman Shri Thanedar defeated several Black candidates in the 13th District and incumbent Rep. Rashida Tlaib retained her seat in the 12th District against Detroit City Clerk Janice Winfrey.

“Psychologically, what it's saying is that we don't control our destiny anymore.”

To be sure, there were successes Tuesday among Black candidates — especially Republicans, including primary victories by John Gibbs over Rep. Peter Meijer in west Michigan and John James in the Macomb County-based 10th Congressional District.

Although some Black candidates outside of metro Detroit will retain seats in the Legislature come November, there “aren’t a lot of pickup opportunities” that would make up for prospective losses in southeast Michigan, Hemond said.

The issue could be exacerbated in future cycles as current candidates leave the Legislature due to term limits, Hemond said. 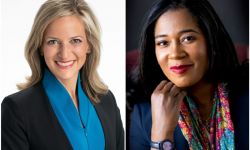