LANSING — Tudor Dixon and other top Michigan Republicans gathered for a “unity” luncheon Wednesday not far from the state Capitol, vowing to regroup after a combative primary to beat Gov. Gretchen Whitmer and fellow Democrats this fall.

But there was a conspicuous absence: Ryan Kelley, a fellow gubernatorial hopeful who finished fourth to Dixon in the Tuesday primary and is now questioning the legitimacy of the contest and “calling for a “publicly supervised hand recount” in the name of “election integrity.” 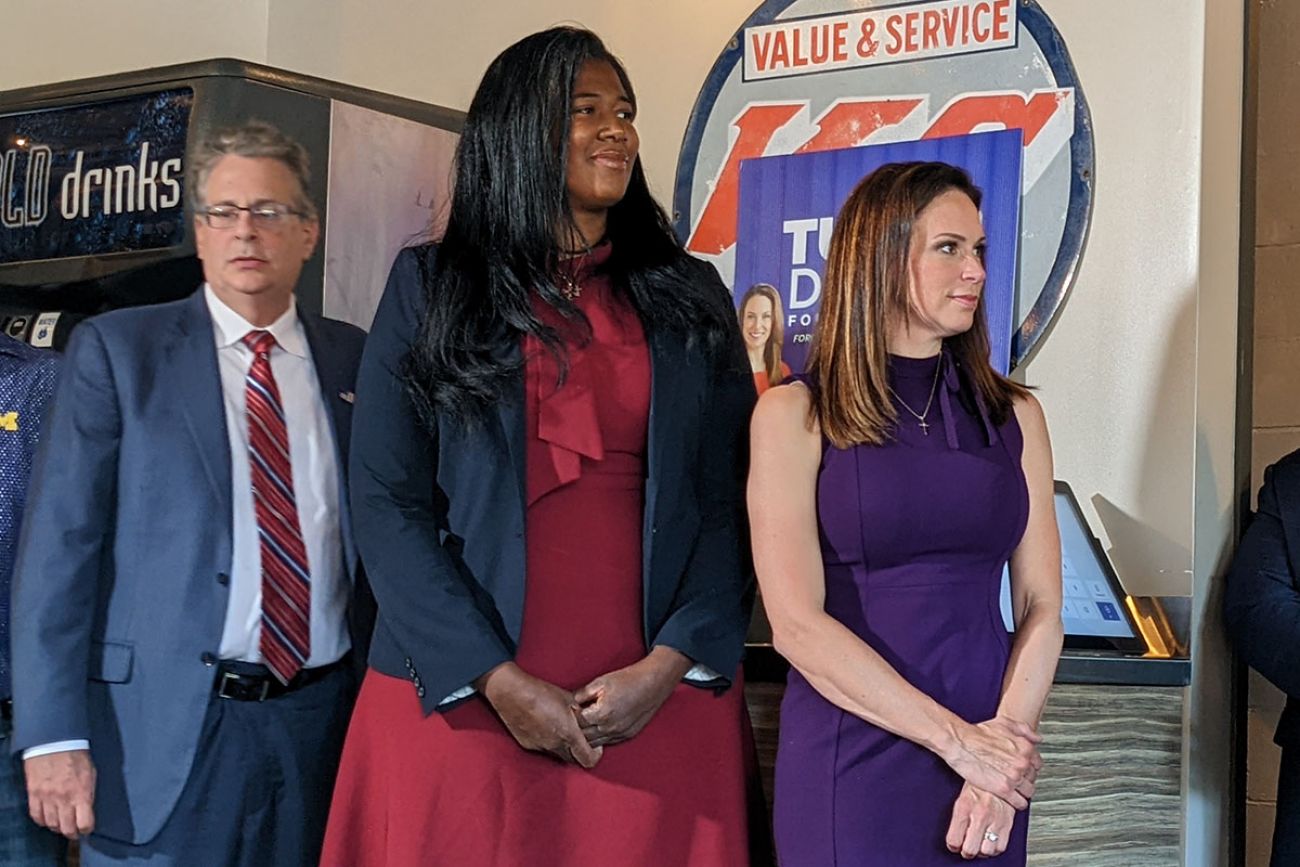 Kelley, like Dixon and other GOP primary rivals, has echoed former President Donald Trump’s false claims that voter fraud cost him the 2020 election.

Two years later, Kelley is spreading conspiracies about the 2022 primary too, contesting what was a 270,000-vote trouncing, according to unofficial results.

In a Wednesday morning Facebook post, Kelley suggested election result test pages published last week prior to the election by two television stations are evidence that Dixon’s win was “predetermined.”

Officials at the TV stations in question — WOOD and WWMT in west Michigan — called the publication a "regrettable human error" as they used “mock results” to prepare their websites for display of unofficial results this week.

Republican election clerks in Kent and Ottawa counties responded with a joint statement stressing that "results posted on media websites are never official results" and reminding voters there are "checks and balances" in place designed to "protect against errors such as these."

The mishap was not “nefarious” but was nonetheless publicized by "online sites that regularly spread conspiracy theories, misinformation and other falsehoods," Democratic Secretary of State Jocelyn Benson's office warned last week.

Kelley cited the test results while refusing to concede his election loss to Dixon. State Senate candidate Mike Detmer of Howell, who was endorsed by Trump but lost his primary, said he won’t concede until there are “full, independent, unfettered forensic audits of 2020 and 2022.”

Kelley, an Allendale real estate broker, participated in “stop the steal” rallies after the 2020 election and is now facing misdemeanor charges stemming from pro-Trump riots at the U.S. Capitol on Jan. 6, 2021. He has pleaded not guilty.

Democrats appeared to revel in the GOP drama, arguing Republicans who spread false claims about the 2020 presidential election should not be surprised that one of the party’s losing gubernatorial candidates is now doing so in 2022.

“This is the brand for a sizable portion of the Republican base,” said Adrian Hemond, a Democratic strategist with Grassroots Midwest in Lansing.

“Even a lot of people that didn't vote for Ryan Kelley are prone to believe conspiracy theories about these elections, and I imagine that that’s only going to continue for the foreseeable future.”

A GOP-led state Senate panel spent months investigating claims by Trump and his supporters and found no evidence of widespread fraud. There’s also “no indication of fraud in Detroit,” according to Trump’s former Attorney General Bill Barr who has called claims that Michigan voting machines were rigged “idiotic.”

But, Maddock told Bridge Michigan, “I’m disappointed for Ryan Kelley's supporters, because… they want to beat Gretchen Whitmer too, and I want to welcome them with open arms to the race.”

Speaking with reporters after the unity luncheon at Arcadia Smokehouse in Lansing, Maddock touted what she called an “incredible effort” by the Michigan GOP to recruit election inspectors and poll challengers to ensure a fair contest.

"We had 2,000 people that we credentialed or were workers," she said. “...I feel really good about what we did yesterday when it comes to protecting the vote, and it'll be even better in the general."

Presumed GOP Secretary of State nominee Kristina Karamo, who has also echoed Trump’s claims about the 2020 election, declined comment on Kelley’s 2022 conspiracy theory, telling Bridge she is “not familiar with that” and is focused on defeating Benson.

DePerno told reporters that he called Kelley on Tuesday night but has not yet heard back from him to discuss the election.

Still, DePerno predicted Kelley – and his supporters – will eventually support Dixon in the general election.

“Primaries are tough,” he said. “Sometimes it takes more than 12 hours.”

Third place finisher Garrett Soldano did not attend the unity event, but he conceded to Dixon on Wednesday night, and called on his supporters to “continue fighting” with all Republicans to beat Whitmer this fall.

"I think Garrett Soldano was an absolute statesman last night," Maddock, the state party co-chair, told Bridge. "He really almost brought me to tears, because we've won, and we’ve lost. I know what it's like to lose. It sucks."

Former Gov. John Engler, a Republican who backed Dixon in the primary and introduced her at Wednesday's unity lunch, laughed out loud when told about Kelley’s claims that the primary was rigged.

“I think he was in fourth place,” Engler accurately recalled, “so I don't think three candidates conspired to deprive him of the nomination.”