Tudor Dixon: What to know about the Republican taking on Michigan Gov. Whitmer

Michigan Government
Tudor Dixon: What to know about the Republican taking on Michigan Gov. Whitmer

It’s Tudor Dixon vs. Gov. Gretchen Whitmer in the Nov. 8 general election, and the two are worlds apart politically.

Whitmer, 50, was elected to a four-year term as governor in 2018 after years in politics, first in the Legislature and then as interim prosecutor of Ingham County. She’s a Michigan native who crafted COVID-19 pandemic policies that Dixon and other Republicans have campaigned against.

Dixon, 45, of Norton Shores is making her first run for elected office after growing up in suburban Chicago, working as a steel industry executive and becoming a conservative commentator on the  Real America’s Voice streaming channel.

Dixon regards herself as an optimist, “wife, mother and cancer survivor” who is  “pro God, pro life, pro gun and pro freedom.” Her campaign leads on a promise of “the mother of all comebacks” for Michigan.

With the next election just months away, here are things you should know about Dixon and where she stands on the issues.

Dixon was polling behind the pack until late May, when a field of 10 candidates imploded because of a massive fraud scandal.

Five Republicans, including presumed frontrunners former Detroit Police Chief James Craig and millionaire Perry Johnson, were disqualified on May 26 from the primary because workers they hired turned in thousands of fake signatures on candidate petitions.

She racked up several prominent endorsements, including the Michigan Chamber of Commerce, Right to Life of Michigan and the Police Officers Association of Michigan until the big one came last Friday: President Donald Trump endorsed Dixon calling her a “conservative warrior…ready to take on" Whitmer, who he called "one of the worst governors in the nation."

The endorsement came after Dixon survived repeated attacks questioning her loyalty to Trump.

GOP primary opponent Kevin Rinke spent big money on ads, calling her an “establishment Republican,” like the ones who will “say anything to get President Trump’s support, then betray him when it matters most.”

U.S. Sen. Ted Cruz, R-Texas, who battled with Trump for the GOP presidential nomination in 2016, also endorsed Dixon on July 29. So did Ben Carson, a Detroit native who served as U.S. Secretary of Housing and Urban Development under Trump.

Education is a priority

Dixon ran as a proud conservative mother of four children who vows to stop what she considers the indoctrination of kids in school.

She’s promised to ensure school kids are protected from “anti-American critical race theory” and “trans ideology,” a term used by some conservatives and religious organizations to describe the belief in gender dysmorphia.

She also wants to make it a crime for adults to bring minors to drag queen events and supported state legislators’ who proposed bills allowing parents to sue schools if they exposed their children to drag queens.

If elected, Dixon touts five changes she would like to make to Michigan’s education system.

She wants to get rid of Michigan’s personal income tax

One of Dixon’s priorities would be to phase out Michigan’s personal income tax “over time so families have more control over their finances,” according to her website.

Michigan’s personal income tax is 4.25 percent and generated about $12 billion during the 2020-21 fiscal year and counts for roughly 30 percent of the all state tax revenue. The revenue primarily goes to the state’s general fund but also supports schools and bridge construction.

While Dixon does not go into detail about how the revenue will be replaced, on her website she vows to “never reduce funding for law enforcement or public safety initiatives.”

Another part of Dixon’s plan to boost the state’s economy is cutting 40 percent of Michigan’s “enormous regulatory code in four years.”

It’s uncertain how this will be done, but Dixon believes it will “unleash entrepreneurs, unlock economic growth and attract new businesses and workforce talent to the state.”

The steel and entertainment industry

Dixon was born in Pennsylvania and grew up in Illinois before attending the University of Kentucky. She moved to Michigan in 2002, when she took a job at her dad’s Muskegon steel foundry.

She previously told Bridge Michigan that she worked her way up from customer service to running sales and human resources at the company. Dixon left the steel industry in 2009 to start a family, three years before the company closed and laid off an entire workforce in 2012.

Today, Dixon and her husband own Cornerstone Foundry Supply LLC, which sells parts to steel foundries across the country.

Before becoming a conservative talk show host, Dixon interned at a news station and on “The Rosie O’Donnell Show.” She also worked full-time as a production assistant for the Oxygen Network co-founded by Oprah Winfrey.

As a hobby, Dixon says she was also an actress in films made by aspiring filmmakers in Kalamazoo. Between 2008 and 2012, she co-starred in a locally-filmed drama called “Lexibaby,” played a teen “bopper” eaten by zombies in “Buddy BeBop vs the Living Dead” and was a leading vampire in a web series called “Transitions.”

Throughout her campaign, Dixon has echoed Trump’s false claims that the 2020 election was rigged.

If Dixon takes office, she states on her website she wants to sign legislation that will make Michigan’s voter ID laws the “strongest in the country.”

According to her campaign website, Dixon would do this by strengthening criminal penalties for forging ballot signatures. She also pledges to ban ballot drop boxes, which are used by absentee voters.

Dixon also wants to ban companies, like CEO Mark Zuckerberg’s Meta, from donating to local election clerks' departments. Some states, like Florida, have banned such donations.

If elected, Dixon also wanted to “clean up” the Qualified Voter File “to get rid of the thousands of dead and long lost out-of-state voters that remain on the rolls,” according to her campaign website.

Trump and his supporters claimed thousands of dead Michigan residents voted in the 2020 election, which they said helped prove widespread fraud. A state auditor general report found that to be untrue.

The Michigan Secretary of State noted that 846 ballots were rejected from people who voted absentee and then died before the general election. The state’s Republican-led Senate Oversight Committee also spent months investigating the 2020 presidential election and found no evidence of widespread fraud. 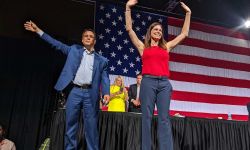 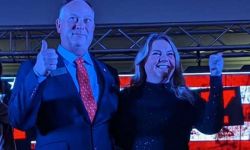