Betsy DeVos is the former U.S. secretary of education and her wealthy family is well known as political donors. But her resignation from the administration of President Donald Trump after the 2021 Capitol riots has led to criticism by Republicans running for governor in Michigan. (Shutterstock photo)
July 25, 2022
Yue Stella Yu (Email)
Michigan Government
Tudor Dixon, 2022 Michigan governor race, 2022 Michigan election

The campaign fundraising tallies come as rivals in the five-candidate race step up their attacks on Dixon’s ties to DeVos, including a debate last week and an ad by millionaire businessman Kevin Rinke. The primary is Aug. 2 to determine who faces Gov. Gretchen Whitmer in November.

The ad claimed Dixon couldn’t be trusted and questioned her loyalty to former President Donald Trump because she courted support from so-called RINOs — Republicans in Name Only — and the Republican establishment.

“Tudor Dixon has taken millions from the same billionaires who tried to illegally remove Trump from office,” the ad says, a reference to DeVos who resigned after the riots at the U.S. Capitol on Jan. 6, 2021.

Dixon, a Norton Shores former steel executive, claimed the ad is a lie and demanded it be removed from the airwaves.

Records that had already been released show the DeVos family directly donated $71,500 to Dixon’s campaign.

While super PACs by law cannot directly contribute to candidate campaigns, they can run ads in support of them. The two super PACs supporting Dixon — Michigan Families United and Michigan Strong — spent a collective $2.24 million to support her, including $1.94 million on media consulting, video production and ad buying, records show.

Of that money, $1.92 million came from Michigan Families United, which has received $1 million in donations from DeVos family members since April, records show.

The super PAC also got $25,000 from the Michigan Chamber of Commerce, which endorsed Dixon, $25,000 from Muskegon Energy Co. and $250,000 apiece from Richard Uihlein, a conservative Illinois billionaire and founder of packaging company Uline, and the American Principle Project, an Arlington, Virginia-based conservative think tank.

A separate PAC, Michigan Strong, raised $101,000 from two donors between April and July, including $100,000 from Bernard Marcus, founder of The Home Depot. It did not receive funding from the DeVos family, according to campaign records.

Michigan Families United has purchased broadcast time to air a 30-second video portraying Dixon as a “Michigan mom on a mission.”

“Our kids don’t need sex and gender talk,” Dixon said in the video ad. “They need to be able to read and write.”

“This is the first election I can remember in which candidates for a statewide nomination don’t have campaigns that exist off paper or off conservative social media,” he said. “There are candidates for the Legislature or minor local offices that have more of a campaign than some of the gubernatorial candidates.”

A spokesperson for Dixon’s campaign did not immediately return a Bridge inquiry seeking comment.

The super PACs and Dixon’s campaign use Dickinson Wright, a Detroit law firm with more than 475 lawyers, for legal consultation, and Holland-based Campaign Resources Group for fundraising consulting, records show.

The Holland firm received $100,500 from the two super PACs between April and July and almost $86,000 from Dixon’s campaign this year, records show.

The law firm got paid almost $6,000 from the two super PACs over the past three months and almost $31,000 from the Dixon campaign.

There is no evidence the three entities are coordinating activities, but the appearance of shared vendors means the firms must create a “firewall” between staff members working on different campaigns to prevent coordination, LaBrant said.

Shared vendors between super PACs and candidates is considered coordination in at least one other state. In Connecticut, super PACs that hire former or current consultants or communications staff of a candidate's campaign are presumed to be coordinating with them.

The records also show Michigan businessman Perry Johnson, who has been disqualified from the November ballot due to an insufficient number of valid signatures, reported raising $7.9 million between April and July, with the bulk of it — 99 percent — coming from himself.

The campaign spent at least $5.9 million in digital, TV and radio ad production and placement, including one payment for “video production” that was as recent as July 8 — well after Johnson was disqualified, campaign records show.

Johnson, along with four other GOP candidates, was kept off the ballot after a massive signature forgery scandal rocked the Republican gubernatorial field. Among them was former Detroit police chief James Craig, who raised $1.3 million this year, most of which came before the state disqualified him from the race in May. Craig is now running as a write-in candidate.

They were removed when a state Bureau of Elections report found 36 circulators submitted forged signatures for multiple campaigns, including those of Johnson and Craig. Bridge reported that at least 30 of them were tied to First Choice Contracting LLC, a firm run by Shawn Wilmoth, whose Warren home was raided by the state Attorney General’s office last month.

Reeds was hired by one of Craig’s subcontractors as a “manager” and supervised all circulators flagged by the state to have submitted forged signatures, Craig alleged in the lawsuit. The complaint says Reeds was a “business partner” to Wilmoth.

Johnson also paid more than $4,000 to Brandon Hall, former Trump staffer who was convicted of election fraud by forging signatures on petition forms in 2012.

In other expenditures, Johnson’s campaign spent $3,850 on March 10 on “airfare for campaign staff” — two days after he appeared at Trump’s Mar-a-Lago Club in Florida to attend a fundraiser for Matt DePerno, Trump-endorsed GOP nominee for attorney general. 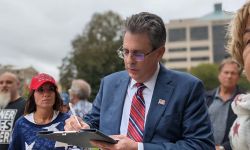 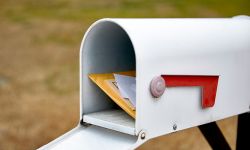