Michigan is awash in cash, with a surplus that few past governors and legislators could imagine.

So when Gov. Gretchen Whitmer, a Democrat, and the Republican-controlled Legislature adopted a $4.7 billion spending plan in March, it was all smiles. There was $1.7 billion for drinking water system improvements; $450 million for parks and trails, $317 million for road and bridge repairs, and $250 million for broadband infrastructure grants to expand high-speed internet to unserved areas.

The bill passed by overwhelming majorities: 95-7 in the House and 34-3 in the Senate. Hundreds of thousands to millions of people will benefit from each of those spending priorities.

State leaders also decided to allocate $200 million to restore or repair four mid-Michigan dams damaged in May 2020 by rising floodwaters.

That benefit is far more narrow and will mostly help about 6,300 property owners enjoy recreational lakes created by the dams, two of which failed during the storm. That’s roughly $32,000 per property — an amount that might have brought howls from fiscal conservatives in most years.

“It’s a gift to the area and the residents who are going to benefit from it,” said James Hohman, director of fiscal policy at the Mackinac Center for Public Policy, a free-market think tank based downstream of the dams in Midland, which was flooded when they failed.

This isn’t a normal year, however, and Hohman’s critique resonated with few lawmakers. In a state flush with a $6 billion in federal COVID relief fund and record tax revenues, lawmakers decided there were few other options but to pay the tab.

“What’s the alternative?” asked Dave Dulio, a professor of political science at Oakland University.  “If the state doesn’t step in, who does?”

If the money for the dams is a “gift,” there was other largesse in the spending bill, including $110 million for “greenways” in Detroit ($60 million) and Grand Rapids ($50 million), $15 million to clean up a toxic chemical site in Muskegon County — even $50 million to help a private company build a facility to extract potash from northern Michigan.

“I would be interested in knowing who’s not getting what they wanted,” Dulio said. “I’m hard pressed to think of one.”

State ‘should have done better’

Property owners lay most of the blame on the former owners of the dams, Boyce Hydro.

The firm first bought the four hydroelectric dams as a family tax break and which for years did not comply with orders from the Federal Energy Regulatory Commission to increase the flood capacity.

When federal regulators revoked Boyce’s license to generate electricity in 2018 over its failure to make repairs, the company claimed it could no longer afford to increase capacity that might have prevented the flooding.

Last year, Boyce filed for bankruptcy and sold the dams to a local association of lake property owners. The firm had less than $4 million in its bankruptcy fund but faced 6,000 claims for damage, making it an unlikely source for the huge amount needed to restore the dams.

When the dams failed, oversight had switched from the federal government to Michigan, who had spent two years assessing the dams to determine what repairs were needed.

“It’s both, to be sure,” Wentworth. “State and federal regulators are one of several groups who should have done better by the people who live in this area and helped make sure this never happened.”

Although the failed dams are not in Wentworth’s district, many of the property owners around the lakes to the north of the Edenville dam are.

“Other people can argue about who’s to blame and debate the finger pointing,” Wentworth said. “But no matter what you believe, the state absolutely has a role in helping this community get back to normal.”

The governor has long said the state would help the area, and the $200 million is only a part of the millions in federal and state aid already granted to the region.

It’s quite a turnaround from her predecessor, Republican Gov. Rick Snyder, who cut $1.2 billion to schools, universities and local governments in 2011 to erase a deficit.

“It makes it easier to carve out $200 million,” said Bob Schneider, an analyst for the Citizens Research Council of Michigan and a former state budget staff member.

‘Not asking for a handout’

In the lakes region, help cannot come soon enough. Businesses that relied on the lakes were devastated and much of the recreational value of the area diminished by the collapse of the two dams.

Even with the state money, the dams — and all of the lakes — won’t be restored until 2026. The floods also caused another $200 million in damages to 2,500 properties downstream.

Now, those who once could walk onto a pontoon boat just behind their homes stare at hundreds of acres of weeds; the Tittabawassee River meanders by hundreds of yards away.

Residents worked with state and federal lawmakers to repair the dams that are almost century old, said David Kepler, a retired Dow executive and chairperson of the Four Lakes Task Force group of property owners.

“Did we work for it? Yes we did,” he told Bridge Michigan. “People who think we got this because of connections, that’s not how it happened.”

He noted that the residents’ group had been in discussions for years with the dam owners and lawmakers for years before the flooding to make repairs.

In addition to the state money, homeowners are paying assessments to cover 20 percent or more of the repair costs that could hit $270 million. Costs to each resident range from $115 to $460 per year. 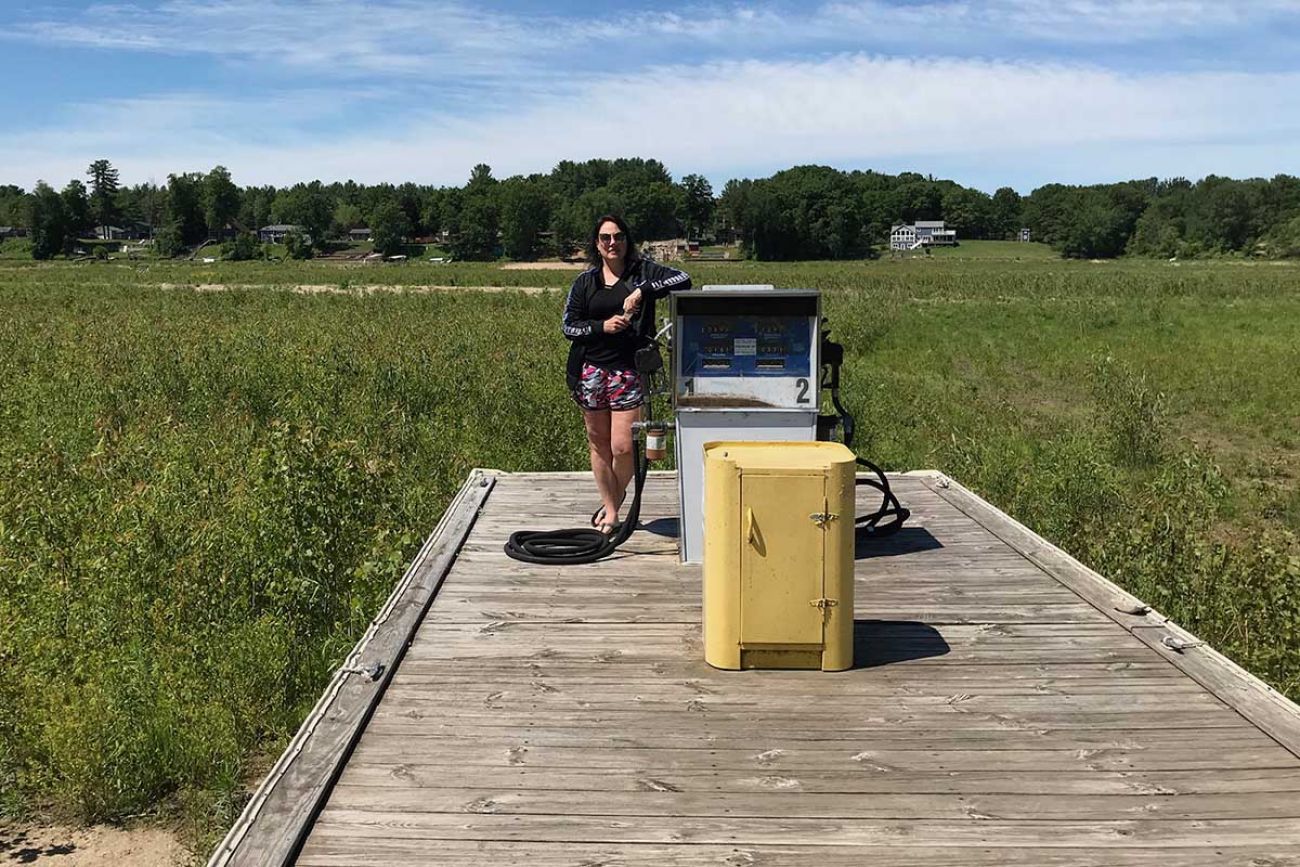 Wixom Lake was created by the now-failed dam at Edenville. Repairs to a system of dams will take years.(Bridge photo by Kelly House)

“The community is not asking for a handout,” he said.

The alternative also was expensive: Kepler’s group estimated it would cost $125 million to remove the dams and restore the surrounding area, which could have spurred a steep drop in property values and local taxes.

Part of their pitch is the current problem may be the mid-Michigan dams but without improving the state’s dam safety program, the same problem could occur elsewhere.

To that end, the Legislature has approved tens of millions more to help the Michigan Department of Environment, Great Lakes and Energy do more to ensure safe dams across the state.

“I feel like we are trying to make the position that there needs to be improvements in dam safety,” Kepler said. The goal was not to make the Midland area dams “the poster child” for failure, he said.

The dams and the lakes were purchased by the task force but will ultimately be owned by the counties of Gladwin and Midland. The rebuilt dams are expected to have a 75-year lifespan and will not be used to generate electricity.

Rebuild the dams — and lives

As property owners can now envision a return of Sanford and Wixom lakes once the dams are rebuilt, others are still seeking compensation for their losses in the flooding.

At least seven lawsuits were filed against Boyce and others over the floods.

Michael Pitt, an attorney handling one of the class-action lawsuits, said the state was right to help many of his clients because it failed to force Boyce Hydro to fix the Edenville dam. (Pitt has also sued the federal government but a judge has dismissed that claim. That decision is on appeal, Pitt said.)

Pitt said the state has not acknowledged any fault for the collapse. But he said residents appreciate the new funding.

“They are looking at rebuilding their lives, not just the dams,” he said.