LANSING — Michigan Gov. Gretchen Whitmer isn’t up for re-election, but she’s been back on the campaign trail this fall trying to help fellow Democrats flip the state House.

Whitmer has a clear motivation: After two years of fighting with Republican majorities in Lansing over gas taxes, budgets and the state’s response to COVID-19, the governor wants to have at least “half of the Legislature that’s going to have my back,” she said at a recent campaign stop for Rep. Sheryl Kennedy, D-Davison.

“We can pick up four more seats,” Whitmer said.

That would give Democrats their first majority in either legislative chamber since 2010, when Republicans flipped the House and continued their vise grip on the Senate, which they’ve controlled since 1984.

The GOP currently has a 58-52 seat advantage in the House, where all 110 House seats are up for grabs. The state Senate, where Republicans hold an edge, 22-16, is not up for re-election until 2022.

Democrats hope for a blue wave propelled by presidential nominee Joe Biden, but Republicans may hold an advantage because of district maps that a court found are the result of a “political gerrymander of historical proportions."

Two years ago, for instance, Whitmer defeated Republican Bill Schuette by nearly 9 points. Democrats gained five seats in the state House, but Republicans still returned a six-seat majority, with 58 out of 110 members.

Democrats expect big things in Oakland County, where at least three seats could be up for grabs. But Republicans continue to build strength in northern Michigan and other rural areas, including a Bay County seat where they are hoping for a flip of their own.

Late last week, with less than two weeks left before the Nov. 3 election, Bridge Michigan asked some of the state’s leading political consultants and pollsters to size up the battle for the state House.

‘A nightmare brewing’ for GOP in Oakland County

Adrian Hemond, a Democratic strategist at the Grassroots Midwest consulting firm in Lansing, said he gave Democrats a 1 in 3 chance of flipping the House at the start of the year.

“But now? If somebody wanted to take the action, I would absolutely put money on the House Democrats flipping it,” Hemond told Bridge.

Democrats have opportunities elsewhere, but Oakland County is “ground zero” for efforts to flip the House, Hemond said.

Through Oct.18, she had nearly doubled incumbent Rep. Ryan Berman in fundraising, but the House Republican Campaign Committee is giving Berman major air support: more than half a million dollars in ad spending.

“Republicans just got brutalized in Oakland County in 2018, and everything that we’re seeing now — whether that’s polling data or digging into the absentee data about how has actually sent ballots back already — that there’s a nightmare brewing for the state GOP in Oakland County,” Hemond said.

Democrats are playing defense in the 19th District, where Rep. Laurie Pohustky of Livonia narrowly flipped a GOP seat in 2018 and is running for re-election against Republican teacher Martha Ptashnik. Whitmer knocked doors with Pohutsky, and a political action committee linked to the governor has put $10,500 into the race.

But Hemond wrote off GOP attempts to unseat Pohutsky as “kind of laughable” given the president’s poor polling numbers in western Wayne County.

The GOP has a better shot against Democratic Rep. Brian Elder in Bay County, where “the president is not as toxic as he is” in more affluent areas of the state, Hemond said.

“There could be a path [for Democrats to flip the House,] but I think it will be very challenging,” said Jenell Leonard, a Republican consultant at the Marketing Resource Group in Lansing.

When Leonard first started working in the state House in 2006, the GOP was focused on flipping Democratic seats in northern Michigan, but those are “strongholds now,” she said.

“When both caucuses have to look at the map to see where they can play, they need to look at not just where they have traditionally held seats, but also look for new opportunities.”

But those same national trends appear to favor Democrats in areas like Kalamazoo and Oakland counties, she said. The latter “has a lot of traditional establishment Republicans that may not be in line with the national trends right now — the Trump administration.” 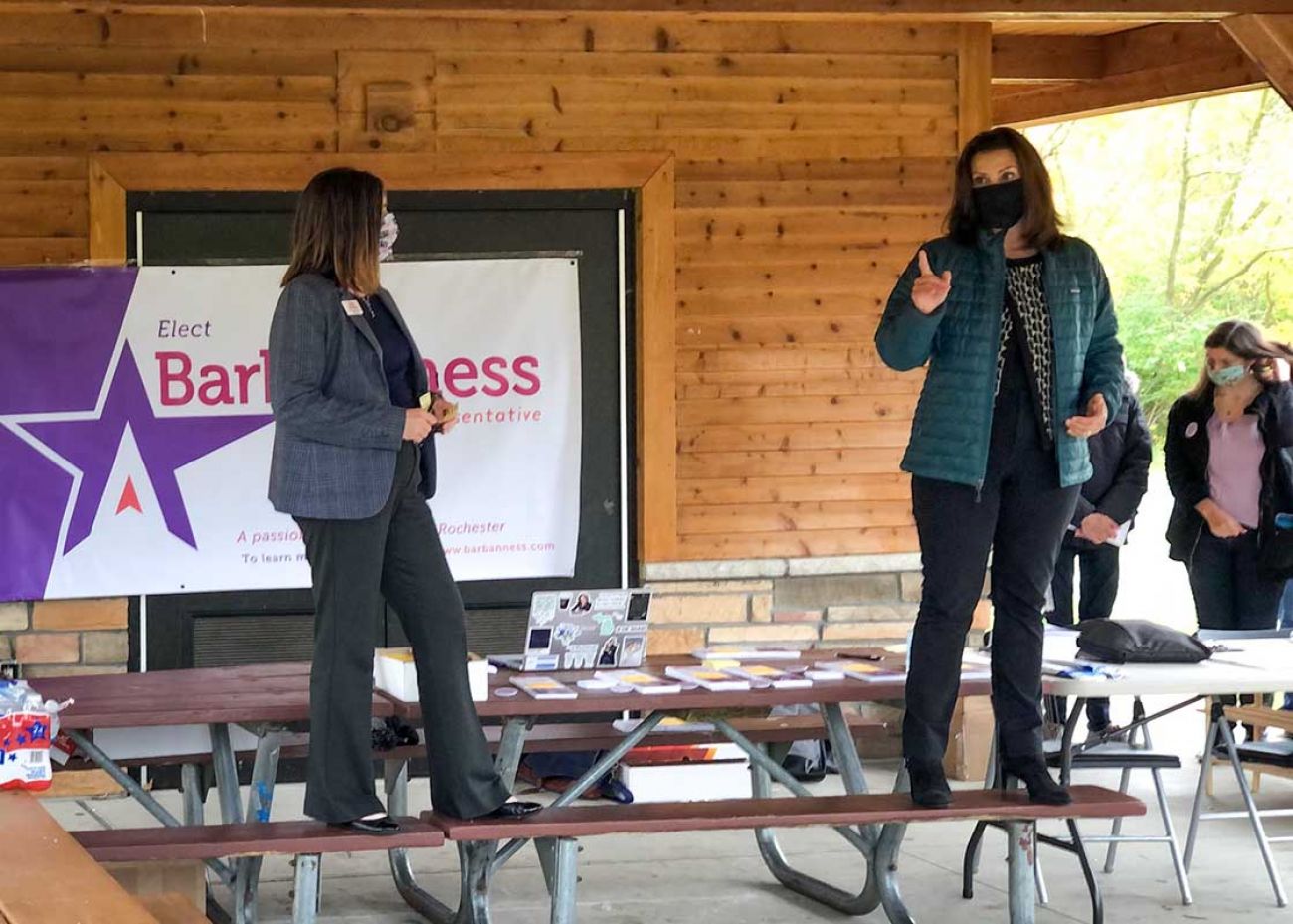 But he noted that didn’t happen in the “last blue wave” just two years ago, when Whitmer coasted in the gubernatorial race but Republicans still returned majorities to the House and Senate.

Despite their gains, Democrats still struggle “big time” outside of metro Detroit and other larger cities, he said.

But Bowens said he’s buoyed by “glimmers of hope” in traditional GOP areas: He pointed to the recent retirement of a Christian Reformed pastor in Holland, who said he stepped away from the pulpit last month because of the church’s broad support for Trump.

“I've not seen this much enthusiasm and effort to try and push the straight Democratic ticket in a long time,” Bowens said.

A 55-55 split could force shared power

GOP consultant John Sellek pointed to another possible scenario: A 55-55 tie in state House seats, which would usher in the chamber’s first period of split power since 1993-94, when Democrat Curtis Hertel and Republican Paul Hillegonds served as co-speakers.

Even if Republicans lose three seats in Oakland County, if they keep a contested seat in Traverse City and maybe even flip a Democratic seat in the Livonia or Bay County regions, “then Republicans could pull something off or end up in a tie,” he said.

Michigan defies expectations, bringing in $1.7B more revenue than expected